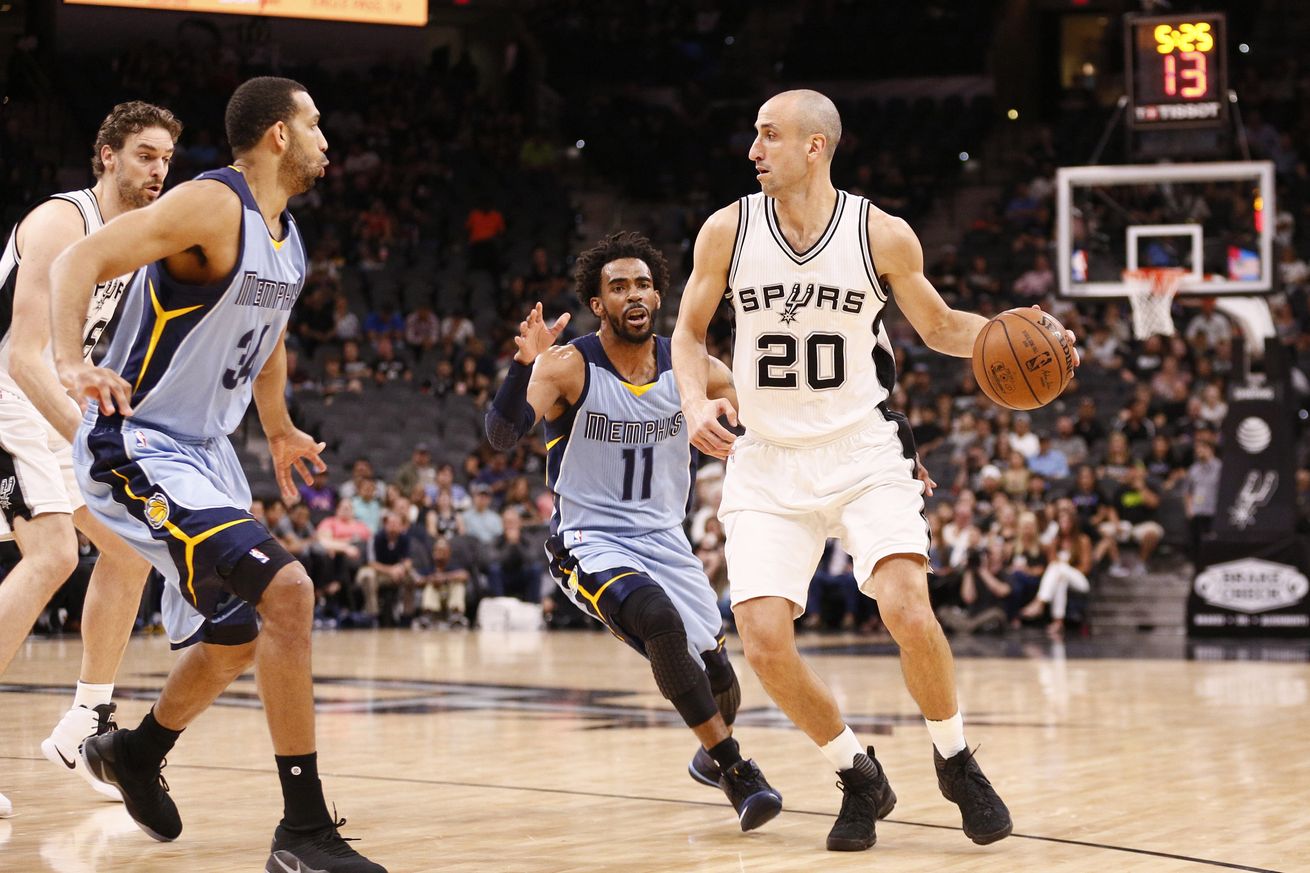 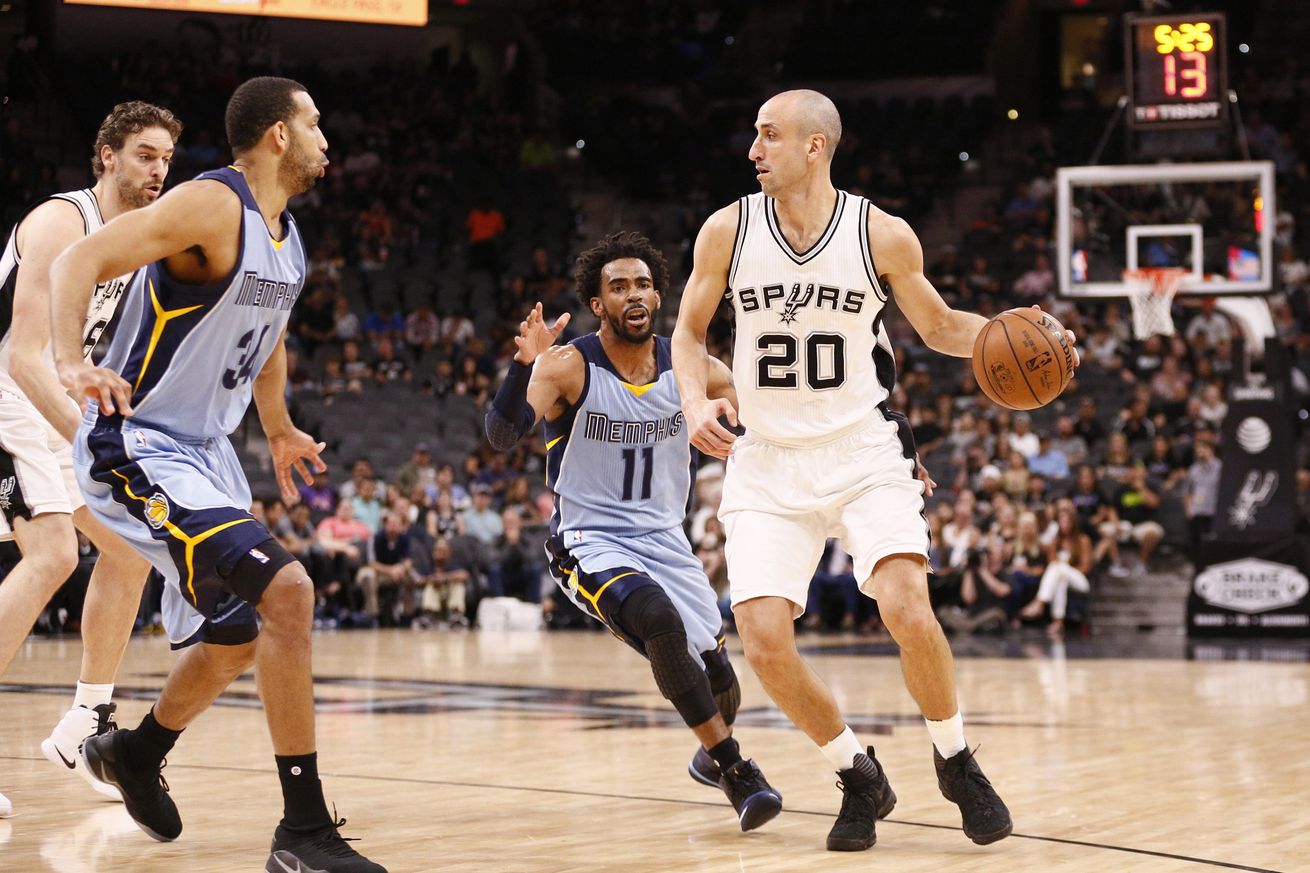 The only question is whether he comes off the bench or starts.

I started writing for Pounding the Rock a few summers ago. As you can imagine, the off-season summer months make it much harder to keep the website filled with articles. Late that summer, PtR Commander in Chief J.R. Wilco wrote a great piece about one his favorite games: The “Manu Game” —Game 5 of the first Spurs – Heat Finals. The series was tied at two games each, and Game Five was a must-win. Just as important for some Spurs fans, there was some fear that Game 5 might be Manu’s last home game, especially if the Spurs lost. His contract was coming up, and in the first four games, he had not played up to Manu standards.

What did Pop do? He started Manu, who then turned in one of his greatest playoff games ever – 24 points, 10 assists. It seemed as if every time the Spurs needed a hoop, Manu would either score or have a Manu assist. The Spurs won, of course – and then went back to Miami with a 3 – 2 series lead. (I don’t choose to recall what happened next.)

Anyway, after reading J.R.’s piece on the Manu Game that summer, I sent him the piece I had written immediately after the Manu Game, entitled “Logic vs. Emotion”. At the time, I was writing a Finals “fake blog” – it was “fake” because it was just an email sent to over 100 of my closest friends. J.R. liked the piece, and here I am writing for Pounding the Rock. Here is the piece (with more about Spurs vs Grizz afterwards):

KIRK: Spock, we need to shake things up for Game 5.

SPOCK: Agreed, Captain. The Miami Heat scored more points than we did in Game 4. With all due respect, your strategy of allowing them to shoot wide-open shots proved to be unwise.

MCCOY: Dammit, Spock, that strategy worked like a charm in Game 3. And they don’t even play basketball on Vulcan.

SPOCK: Your insults have no place here, Doctor. And even though I have no feelings, I still feel a mild distress when I recall that Vulcan is now destroyed.

KIRK: You know, my gut tells me we need to start Manu. It may be his last home game, and the crowd will get very emotional if we let him start. Bones, what do you think?

MCCOY: Dammit, Jim, I am a doctor, not an assistant basketball coach.

SPOCK: Captain, it would be illogical to start Mr. Ginobili. He is shooting 35%, averaging only 7.5324 points per game, and has more turnovers than rebounds. Frankly, starting a tribble would be more logical.

MCCOY: Jim, I hate to say it, but old pointy ears is right this time. Manu’s game stinks so bad it would knock a buzzard off a s**t wagon.

KIRK: You are right about that. Bones, is Manu injured?

KIRK: Enough debate. I’m the captain, we are starting Manu. If it doesn’t work out, I will answer to Star Fleet.

SCOTTIE (over the intercom): Captain, you need to get down to engineering! Danny Green is so hot the warp drive is about to blow!

KIRK: Sorry, Scottie, nothing we can do. If we let Danny Green cool down., we don’t have a chance of making it.

MCCOY: Jim you were right. Your gut instinct to start Manu worked out perfectly. Emotion overcame logic once again. What do you say now, you Vulcan robot?

SPOCK: Doctor, your insults have no place here. I knew starting Mr. Ginobili was logical. I have now consulted the Corman Outcome Theory, and it proves the decision was logical – we prevailed. Indeed, because the Miami Heat had gone small, starting Mr. Ginobili meant the Heat had to try to cover him with Mike Miller, who hasn’t been able to play defense since the Empire was young. The logic is impeccable.

KIRK: Mr. Spock, that is a reference to Star Wars, not Star Trek. And something else is bothering me. Bones, why is it that you spend all your time standing next to my captain’s chair picking fights with Spock? Shouldn’t you spend some time in sick bay, at least every once in a while?

SCOTTIE (over the intercom): Captain! Danny Green is really hot now. I can’t keep the ship together much longer!

You may ask why I’m dredging this up again. Or you may be thinking along with me: Time for another Manu Game!

Once again, the Spurs are in a dog-fight, tied 2 -2, with Game Five a must-win. Once again, Manu has not played well in the first four games (not scoring a point in four games = not playing well). He can’t play any worse, and may play better with the first unit. Once again, this might be Manu’s last home game if they don’t win. Spurs fans love Manu Ginobili, probably as much as they loved the Great Duncan. The home crowd would go crazy if Manu Ginobili is announced in the starting line-up.

One thing different than the Heat series – Dannygreen! is NOT in danger of overheating the warp drive. Zero threes in the last two games, after a great Game 2. Perhaps coming off the bench will be good for him and clear his head – he seems to be over-thinking his shot. Playing with Patty and Pau and David Lee will more resemble the 2013-2015 Spurs Beautiful Game than the iso-heavy first unit, and may get him a few early shots, just like old times. Maybe, just maybe, he can become red-hot DG again. The Spurs desperately need at least one of their shooting guards to, you know, make a shot. And remember that although the Manu Game is named after Manu, Dannygreen! had six threes in that game. Just saying…

Putting DG on the court with the second unit may also help the defensive rotation. If DG plays when Kawhi is out, DG can take Conley or whatever perimeter guy who needs covering, without forcing Kawhi to do the superhuman thing two games in a row.

So, who’s with me? I think I hear the crowd chanting again, “Manu, Manu, Manu….”