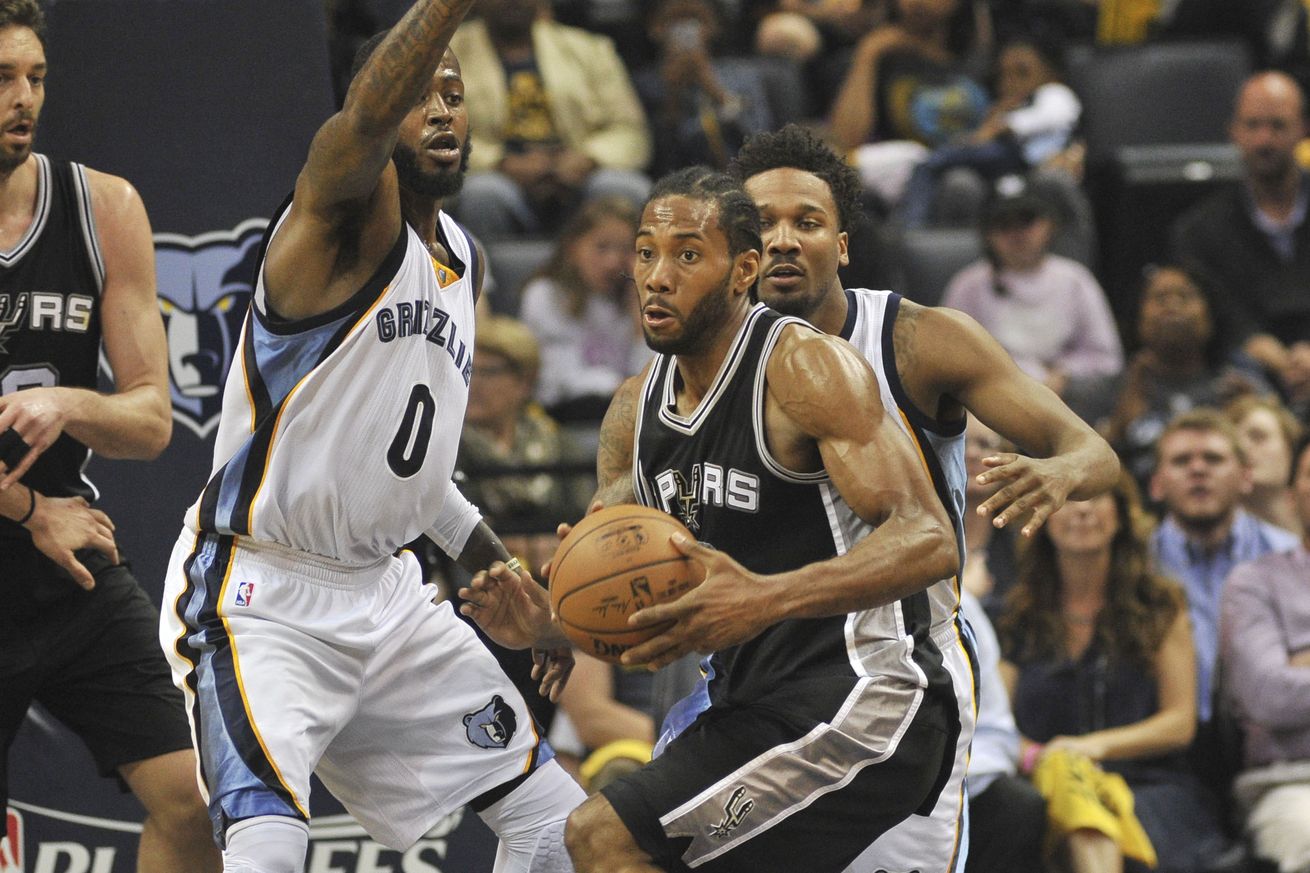 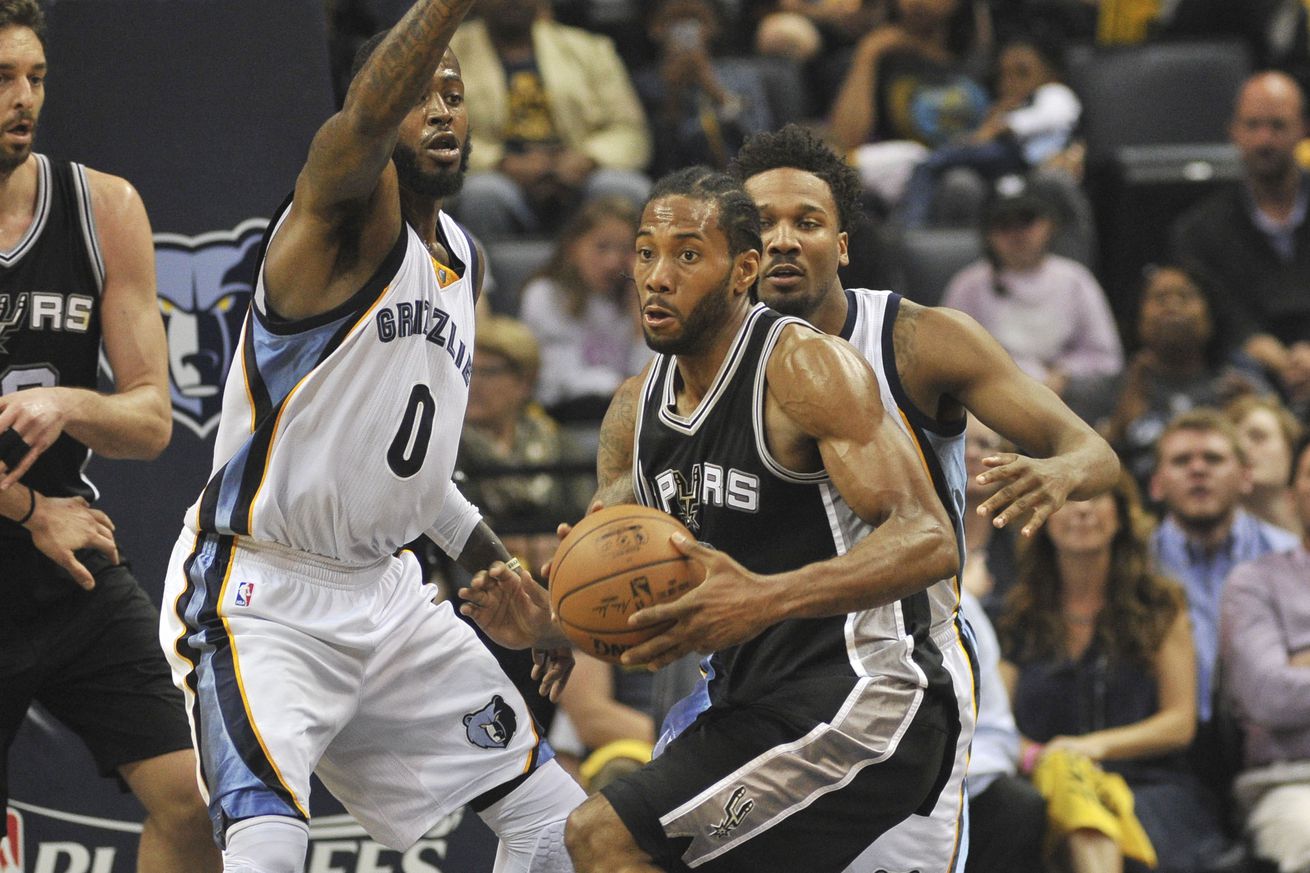 Kawhi didn’t deserve to lose game 4, but neither did the Grizzlies.

A Matter of Grit and Inches

After the Kawhi Leonard and Spurs lost game 4 to Mike Conley and the Grizzlies, I had to do something I’ve never done before. I had to explain a loss to a 5 year old. Although she’s watched games with me before, this is my daughter’s first real immersion into the emotional crucible of the playoffs. Saturday morning, she had put on the #2 Leonard shirt that she’d gotten before the playoffs started. Then the fourth quarter and overtime came and she watched her hero play like the Kobe-LeBron hybrid he’s been all season. She was ecstatic, even if her father knew what was probably coming.

After Marc Gasol won the game with an off-balance jumper, she reacted the way we all do when we’re faced with the perceived injustice of the universe.

So I, grizzled veteran in his third decade of watching the Spurs in the playoffs, had to reassure her that the Spurs still had two more games at home with an excellent chance of winning the series. This was necessary, because the Spurs were allegedly – in her words – “dead”. The Grizzlies had killed them.

I explained to her that even though they had lost, we could take encouragement from the fact that they fought back from a 10 point fourth quarter deficit, that we still had the best player in the series, and that the Grizzlies had only done what they were supposed to do.

Was I bluffing a little? I’m still not sure. There’s a reason no one wanted to play Memphis. They’re like Arnold’s T-1000 in Terminator 2: they never stop coming, even when they’re severely overmatched against a superior force. They have pesky young guys, like James Ennis and Andrew Harrison, whose heroics will go overlooked in light of Marc Gasol’s and Mike Conley’s big shots. They have even peskier veterans like Zach Randolph and Vince Carter, who is embarassing his fellow NBA oldster Manu Ginobili in this series (I withheld from my kid that Manu is shooting 0-15 in the first four games because I don’t want her to start having nightmares.) And in Gasol and Conley, Memphis has a pair of stars who are easy to overlook until they’re sending you home with your tail between your legs.

But they aren’t superstars. Only the Spurs have one of those. After dominating the Grizz defense for ten quarters in games 1-3, Kawhi Leonard accelerated his ascent to a higher plane of basketball consciousness in game 4. With 43 points, he shattered the playoff career scoring high that he set just a few nights earlier in game 2. (That total, by the way, is exceeded in Spurs playoff history only by The Iceman.) And the way Kawhi did his thing, by accounting for nearly all of his team’s scoring in the fourth quarter and overtime, was eerily reminiscent of LeBron’s performance against Detroit in the 2007 Eastern Conference Finals when he scored 26 of his team’s final 27 points.

But those LeBron teams never won a championship, and advanced to only one Finals. If you’re on this site, there’s a good chance you remember that one because it ended in a Spurs sweep. The 2007 Spurs won that year because everyone in the rotation made contributions while Cleveland had to rely on a single guiding light to do everything.

Here in 2017, the Grizzlies have guys like Harrison making clutch plays in transition and sinking overtime free throws to keep his team in front. Kawhi outscored Conley and also guarded him on the other end, but Conley had five other teammates in double figures compared to Kawhi’s two.

One of those two was LaMarcus Aldridge, who did most of his offensive damage in the third quarter to finish with 13 points. Aldridge was signed to be the 1B star to Kawhi’s 1A, but this season he’s struggled mightily to find a consistent groove. I’m not an expert on body language, but he’s played like a guy who doesn’t look comfortable with himself or his team. If the Spurs end this season without a championship, a lot of fingers will point to the guy for whom the Spurs unretired #12.

As for the rest of the current roster, it’s hard to know what to expect from anybody on a nightly basis besides Patty Mills and Danny Green. Tony Parker followed up a 0 point outing in game 3 with a gutty 22 in game 4, but he was repeatedly targeted on defense – including Conley’s tying shot at the end of regulation – and ultimately wasn’t up to the task of being the number two offensive option late in the game.

Mills’ decision to try to finish the fast break layup that Harrison blocked off the backboard was a turning point in overtime. A Spurs’ basket would’ve given SA a two possession game with about 1:30 to go. Instead, Memphis got a Gasol three point play which cut the lead to one. One thing my daughter will learn as she becomes a Spurs fan is that basketball, and playoff games in particular, often come down to a matter of inches. After Patty’s fastbreak try went the other way, those of us of a certain age heard Skee-Lo’s “I Wish I Was a Little Bit Taller”.

Back home, my shorty was wanting to know why her team lost to the “mean” Grizzlies. I had to tell her that sometimes the other team deserves to win more than your team. Then I thought for a moment, and I clarified that while the Spurs might not have deserved to win the game, Kawhi Leonard didn’t deserve to lose. We still have the best player in the series, I assured her. But even the best need help. As the Spurs of the past proved over and over, one superstar can win an individual game and maybe even a series, but ultimately it takes a team to go all the way.