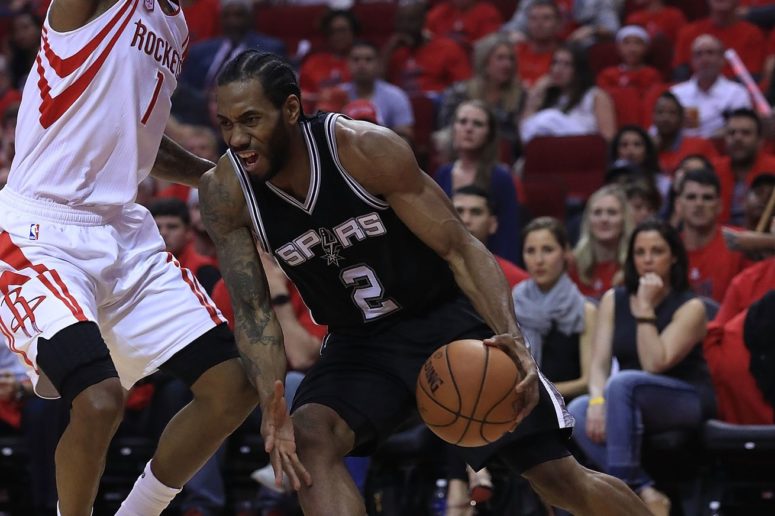 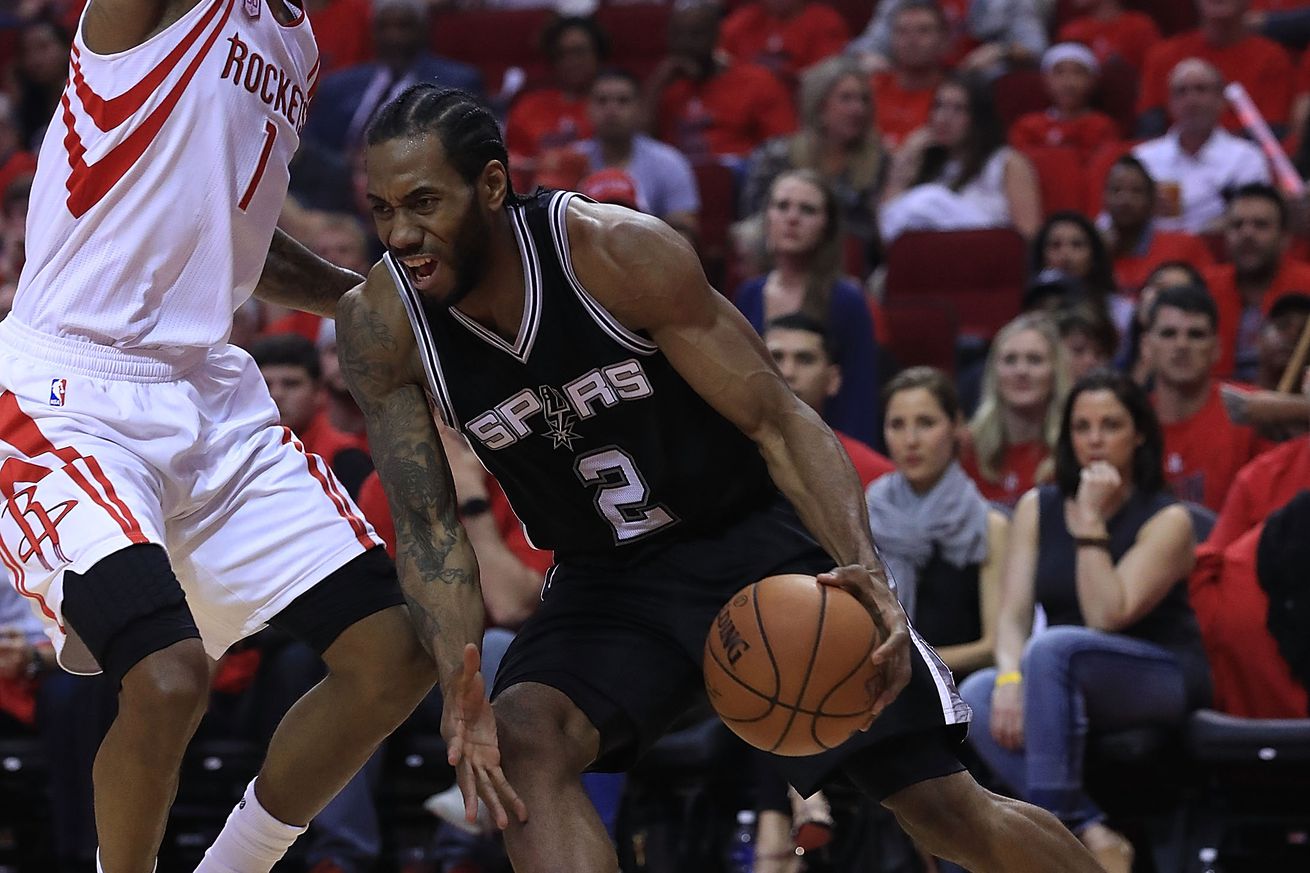 All of SB Nation’s NBA blogs are acting as if Adam Silver’s “eventual” NBA league expansion has just happened.

He’s a top-five player in the world and he’s younger than the other guys that occupy the same ranking. This was very easy to determine.

Danny’s versatility on defense is exceptional, he’s a streaky-but-dangerous shooter, and he even showed in the playoffs he has improved his off-the-dribble game slightly above panic-inducing levels. He defended the likes of Mike Conley, Marc Gasol, James Harden, Ryan Anderson, Steph Curry, Draymond Green, and Kevin Durant at various points in the playoffs; it’s a no-brainer that he’s number two on the protected list.

What is he, exactly? Well, we may not know quite yet, and that’s a little bit of why he’s so high on the list. He is still unqualified to be the starting point guard on a championship contender, but he has the potential to be something special. Think of it like this: if the Spurs were to trade for Kyrie Irving or if the Spurs were to beat the Warriors, Dejounte is probably a centerpiece either way.

You better believe a 40-year-old bench player is protected in an expansion draft. He looked cooked until game five of the first round, but when Manu comes alive, there’s no one like him. He’s the heart and soul of Spurs basketball, and any franchise would be lucky to have him for any part of his career.

Patty just got paid, he’s in his prime, and he is among the best backup guards in the league. With his fireball offense and energy on D, he’s in a perfect role as co-starter and secondary playmaker with the second unit. With a bit of transition going on in the backcourt, Patty’s presence in the backcourt is essential.

This guy, right? Even if you excuse his offensive performance against the Warriors because they didn’t have to game plan for Kawhi or Tony Parker—seriously, that is a huge deal—LaMarcus largely wilted under the bright playoff lights. However, defensively he is still a very valuable rim protector. He’s by far the second-most talented player on the roster, but it’s difficult to put him higher on the list when he may not even want to be on the team anymore and might be out the door within a year.

Davis is an interesting prospect that still has some large kinks to work out. He feels like Matt Bonner without a catapult jumper that takes a minute to launch, a lot more bounce, and a less adorable runner in the paint, but he can’t yet rebound, defend, or really hold his own against the bruisers out there. Still, he might be a very important piece eventually.

The last and final spot on the protected list goes to one of the weirdest players in the league. He’s a wing or a guard, but he needs to play the 4 at all times, but he’s spiritually Boris Diaw reborn, or something like that. Anderson got very real playoff reps this past season and could be primed to make a leap of sorts. With no real depth at either forward spot, the 23-year-old cult hero is facing actual expectations to produce this upcoming season, and only time will tell if he is truly deserving of this spot.

To be honest, I thought Derrick White was just an undersized combo guard without a real NBA future. That assessment feels more wrong the more video of his I watch. White’s feel for the game, his pace, shot-making ability, and size could prove to make him an effective bucket getter when Kawhi is off the floor, and imagining what White and Murray might look like in the backcourt is very interesting. White probably doesn’t have a superstar ceiling, but he might be Brandon Roy-lite in doses. It was difficult leaving him unprotected, but with this current roster, a versatile wing feels more like a need and a smooth scoring guard feels more like a luxury.

Pau is valuable but Pau is old. He can’t get automatic buckets down low like he used to and defensively he is mostly compromised. Still, he still is a great passer, he is now an expert shooter from the corners, and he had moments in the Rockets series that reminded everyone his very long arms can still serve as quality rim deterrents. It’s also worth noting that his contract would be off the books should an expansion team draft him.

Paul is currently an unknown quantity, and at age 26 it’s unlikely an expansion team would want to use a valuable spot on an unknown player entering his prime that wouldn’t really change a win total. He made some incredibly difficult shots in Summer League against good and bad defenders, he made some extra passes despite having a hot hand, and overall, he might eventually prove to be a good role player.

The darling of Spurs Summer League might be on the verge of figuring out how he can make it in the NBA, but the track record of undersized scoring guards without super-duper elite speed or ballhandling is, well, not good. If he can hang with the biggest and best then he becomes an interesting offensive piece, but if he can’t then at least we’ll always have his 30-point games in July.

Blossomgame doesn’t have one elite skill and didn’t show an incredible hustle in college. However, at 6-7 with a wingspan of 6-10, he has physical tools that make him an interesting future 3-and-D candidate. He probably needs to be seasoned as a Spur for a few years before a team should really consider him as an expansion draft candidate, which is why he’s left unprotected.

Lauvergne is big, can shoot it a little from deep, and hasn’t really done much in his career. He could be a useful Spur, but a handful of other teams have already passed on him at least once. He’ll get a good bit of run this upcoming season, but he’s replaceable should a team grab him in an expansion draft.

For a guy that relied on so much athleticism in the past, Gay probably isn’t being picked up by an expansion franchise after an achilles tear. He may not be fully healthy for another six months or so, and at 31, he might have to fundamentally change the way he plays basketball. That may not be a bad thing if he moves to the four, but it is also worth noting that Gay can opt out of his contract in a year, should he really ‘wow’ the league. At best, he might be a rental.

The least protected player on the Spurs roster would not be Tony Parker under normal circumstances but these are normal circumstances. With a ruptured quad involved, no expansion team is going to waste a roster spot on a currently-very-injured mid-30s guard on an expiring contract. It’s like he is protected from the expansion draft without using an actual protection spot. Cheers!