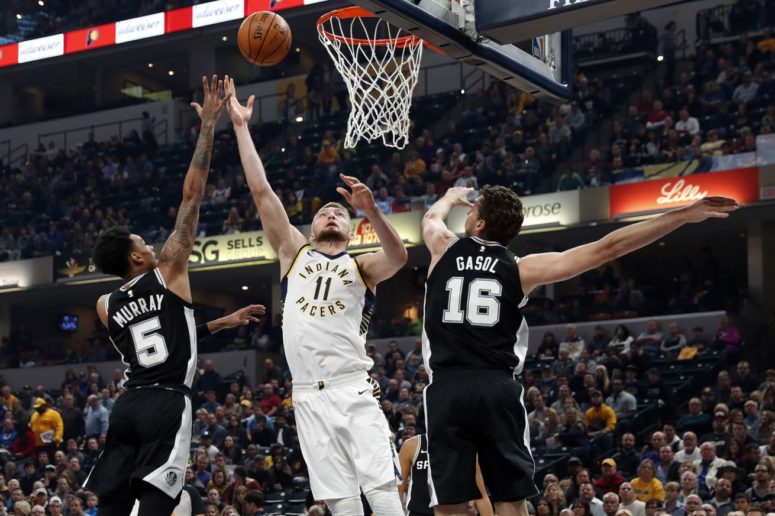 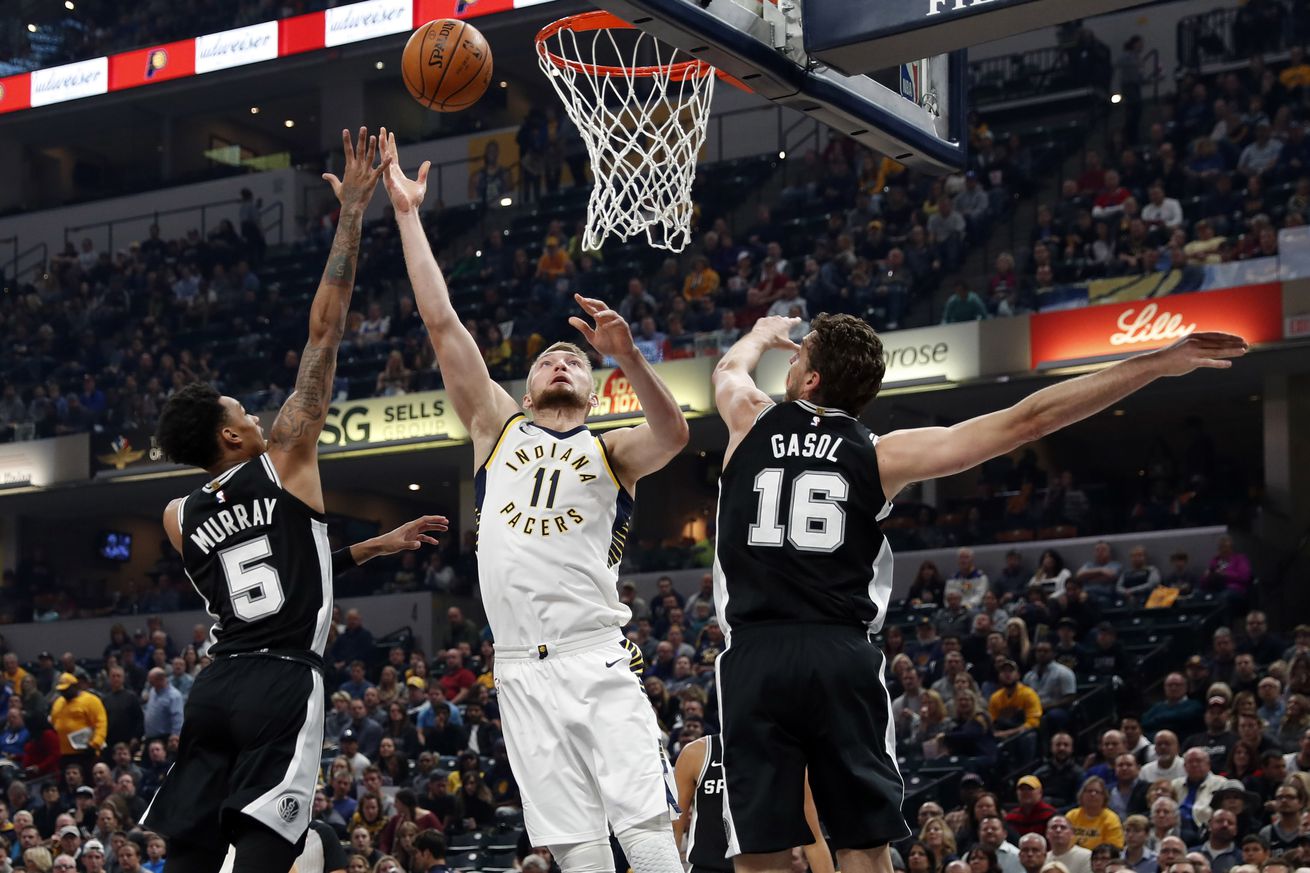 While neither team consistently played to their strengths down the stretch, the Spurs lost to the Pacers because it’s difficult to overcome early growing pains against an opponent playing well.

Much will be made about Victor Oladipo’s game-winning triple (and much should be made, after the Pacers were so harshly criticized for trading Paul George to the Thunder for “just” Oladipo and Domantas Sabonis) but the Spurs had the game in a nine-point vice grip halfway through the fourth quarter after an 18-5 run and then simply let the game slip through their fingers for a 94-97 loss.

In the final 6:30 of the game, the Spurs either missed a shot that was outside of 10 feet or turned the ball over a total of seven times. Though the late heroics of Danny Green nearly won the game, the Spurs had every reason to drive to the hoop or throw entry passes to a still-hot LaMarcus Aldridge down low — and did neither.

This is a frustrating loss, and the temptation is ignore frustrating losses and move on, but this result should be revisited later in the year as a pivotal game for three reasons: Brandon Paul’s two-way play, Rudy Gay’s offensive potential, and the chaotic opportunity that comes with offensive rebounding.

Paul got into early foul trouble this game, but his ability to hound a ballhandler like Corey Joseph and then switch onto a big like Al Jefferson and immediately slide into a box out upon a shot going up must have Pop thrilled. Paul’s aggressiveness and ability to successfully switch on defense has the potential to earn him big minutes, and that’s without even touching on his mature and collected shooting stroke.

As for Rudy? Well, his affinity for long, pull-up twos and his ability to make good things happen near the rim or from the three-point line points to the reason why teams like the Grizzlies and Raptors gave up on him earlier in his career. Gay went 0-4 on long, isolation two-point jumpers, looks that if redistributed to the paint and behind the arc (where combined he made three out of four attempts and generated four free throws) could get folks excited about the offensive impact he would make with a tweak to his shot selection.

I can feel multiple fan bases shaking their head right now because the Spurs might actually be the team to eliminate such shots from his game.

The Spurs and Pacers each finished with 44 total rebounds, but the Spurs nabbed 12 offensive boards, including five from Kyle Anderson, baseline-cutter-extraordinaire. They also shot 9-28 from 3, marking the second-consecutive game they’ve attempted more than 25 shots from behind the arc, and the second-consecutive loss.

There could be some noise in the connection between poor three-point shooting and losing: overall, the Spurs are shooting just 29.8% from 3 for the season and are 4-2. But, the Spurs have largely been able to overcome poor shooting from deep through their dominance on the boards, including on the offensive end, which has not been a focus of theirs in previous seasons.

Watch a Warriors game and it feels like almost all the wins come with a back-breaking moment when they launch a long 3, rebound their own miss, and end up with a wide-open look from deep or an easy layup or dunk. Because the Spurs can now put five capable offensive rebounders on the court at once, they are going to have possessions offering similar possibilities in the chaotic scramble for the ball. A prime example came at the six-minute mark of the fourth quarter, when Dejounte Murray grabbed an offensive rebound around a cluster of Pacers jerseys and kicked it out to Pau Gasol, who was completely alone on the right side of the floor, and launched a 3.

Pau air-balled the shot, resulting in a shot clock violation, but it was the same sort of chaos that the Golden State often feasts on, and it was a brief glimpse of what a team built to clean the glass can do when small-ball teams are caught between finishing off a defensive sequence and sprinting the other way for a fast break attempt.

Six games in, the Spurs are stretching themselves on both sides of the floor in hopes of finding a higher ceiling at the the regular season’s close. With key injuries still depleting the lineup and players both old and new pushing their own limitations while learning to play together, losses could pile up a little quicker than usual for the Spurs. However, the same guys experiencing these growing pains are getting reps and experience they wouldn’t normally get on a healthy roster.

And that might be a better way to build a championship contender than just handing the ball to the guys wearing number two and number nine.

-Danny Green’s two-way heroics late in the game were almost Kawhi-like. There just aren’t that many players outside of the superstar conversation capable of dribbling into the paint for a heavily contested layup, stripping Thad Young on a layup attempt, tying Oladipo up and winning the jump ball, nailing a contested triple, and cutting backdoor for a layup late in the fourth quarter.

-I sure would like to see more Davis Bertans. The mere threat of his shooting ability can scramble a defense that is set to smother Aldridge down low.

-Nearly every DJ floater and Patty Mills jumper came up short. Looks like all they need is time to get their legs.

-Whenever you ask yourself why Pau Gasol is in the game, look to his passing. He can literally see passes other people cannot because he is so dang tall — not to mention his excellent vision. Also, his line was 17 points on 7-10 shooting in 30 minutes, 7 boards, 5 assists, 5 blocks and no turnovers. He was also the only starter with a positive plus/minus — +8. He wasn’t the reason the Spurs lost Sunday.

-DJ made a corner skip pass around the seven-minute mark of the second quarter that is the baby stage of the LeBron crosscourt corner-pass.

-Kyle Anderson, with as often as he sneaks in and receives passes for easy looks, should be the official Baseline Bum player representative of the Spurs.

-Pau Gasol and Al Jefferson battling in the post looked like two old elephants elegantly dancing together. They are so big, so slow, and have such beautiful footwork.