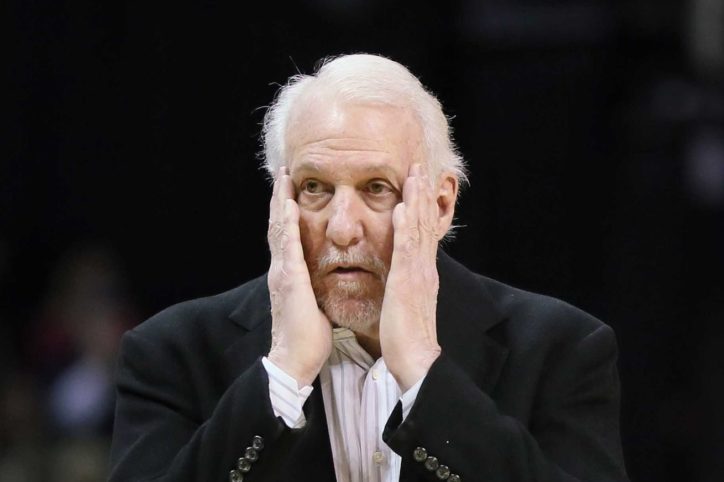 An area of concern has surfaced out of what used to be a team strength.

Despite their 16-11 record in games that are within 5 points in the last 5 minutes, the Spurs have suffered more than their fair share of late game failures this season. The 21-point collapse against the Bulls in mid-December is the first that comes to mind, but they also almost choked away a couple of those victories, too.

Poor execution coming out of the huddle nearly doomed the team against both the Thunder and Suns. A deeper look at their clutch performances throughout this season reveals a problem. In an admittedly small sample size, the Spurs appear to struggle after timeouts and stoppages when the game is on the line.

But late game execution is more complex than just trying to score as many points as possible. There are several different situations that require distinct approaches. With the lead and less than a minute left, it may be almost as valuable to run time off the clock as it is to score, though obviously doing both is the optimal outcome. Conversely, a team that is down by a score or more needs to get points as quickly as possible.

Once the game reaches the point where the winning team could run the clock out, the losing team has to foul (if not earlier). Just inbounding the ball and maintaining possession should be enough in that case to secure the victory.

There’s far more nuance to late game tactics and strategy, but even that little bit of delineation is enough to expose some of the Spurs’ strengths and weaknesses.

San Antonio has had the ball after a timeout or stoppage within 5 points of their opponent 38 times this season and scored just 33 points on those possessions. That’s only 86.8 points per 100 possessions, which sounds terrible, but as we just discussed, they weren’t even trying to score on some of those.

As an example, the Spurs ability to successfully inbound the ball at the end of their last matchup with the Grizzlies effectively ended the game.

So, in order to understand how effective the Spurs have been after having the opportunity to talk it over, we need to break these plays out into categories that make sense. One way to do that is think about each play in terms of the offense’s goal. That leads to five broad categories:

1. Score (Neither team is managing the clock, yet)

4. Last second shot (Losing team has minimal time to score to tie or take the lead)

5. Ball control (Winning team in a game where there aren’t enough possessions left for the losing team to catch up)

When we break their 38 possessions down into those categories, this is what we get.

There’s good news and bad news. When the Spurs come out of a timeout or stoppage in clutch time with no need to manage the clock, they’ve done incredibly well. Seventeen points on 11 possessions certainly makes it seem like the team’s coaching staff is earning their paychecks.

For the most part, though, those are the team’s typical play calls and execution. If anything, the team’s success in this sample is due to players hitting tough shots.

On the other hand, pretty much anytime they’ve needed to take the clock into consideration after a timeout or stoppage, they’ve struggled. Scoring just 7 points on 9 possessions when needing a quick bucket to tie or take the lead is understandable – the defense is dialed in and there’s not much time to work with – but turning the ball over on a third of those possessions, effectively ending the game without even a chance to win, is inconceivable.

It’s also pretty difficult to understand how the team could fail to score on any of the four possessions where they’ve needed to run the clock and still try to get a bucket. The looks in all four instances weren’t bad, though, and there’s at least 1 missed foul call that should’ve led to free throws, so this will likely sort itself out over time.

The Spurs haven’t scored once on shots to tie or win with time running out, either. They’re 0/4 with a deflection rolling out of bounds as the clock expired on their 5 possessions in that situation coming out of a timeout or stoppage, though again, that’s a difficult spot to score in.

Lastly, in a spot you might expect the Spurs to excel, they’ve turned the ball over on 2 of their 9 attempts to inbound out of a timeout or stoppage when all they needed to do was maintain control of the ball. In the other 7 instances, they’ve been successful. Two of those inbounds ended the game and the other 5 drew free throws. Most importantly, the Spurs won all 8 of those games.

The play they’ve run most often in that situation looks like this:

That’s the same play that resulted in those virtually identical and nearly catastrophic turnovers against the Thunder and Suns.

They lined up for that exact same play against the Thunder just before the turnover, with Marco Belinelli drawing a foul on Terrance Ferguson before the ball was inbounded, giving the Spurs a free throw and the ball in the same spot. It’s probably not a good idea to give any team, much less one with Paul George on it, a free preview of the play you intend to run.

The 4 times the Spurs have called something else in that situation have worked out just fine.

In the future, let’s hope they go with one of those, or anything else really.

The Spurs clutch performance so far this year has been difficult to parse. Their 16-11 record in those games belies their underwhelming performance. They’ve outscored their opponents by 4 points in clutch time in those 27 games, but have a net rating of -5.3, which is 20th in the league. Looking at their ATOs, you might expect them to have the worst turnover rate in the league, but they’re actually 4th, giving it away only 9.7 times per 100 possessions in the clutch.

There’s not nearly enough data here to support hard conclusions about what the team can or cannot do. Their ability to score after timeouts and stoppages, even in clutch time, is impressive, and right in line with the team’s reputation, so perhaps it will continue. But their inability to do so once the clock becomes an issue is troubling. Whether that’s representative of a larger concern or an anomaly that will disappear with more reps is hard to tell, but it’s definitely something to watch out for.