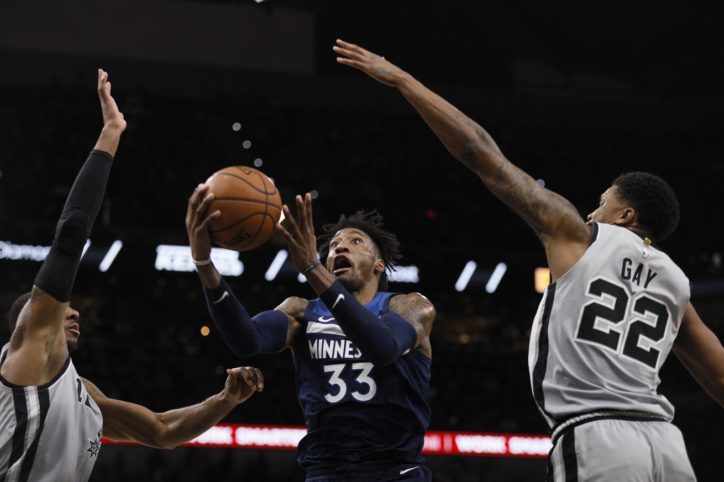 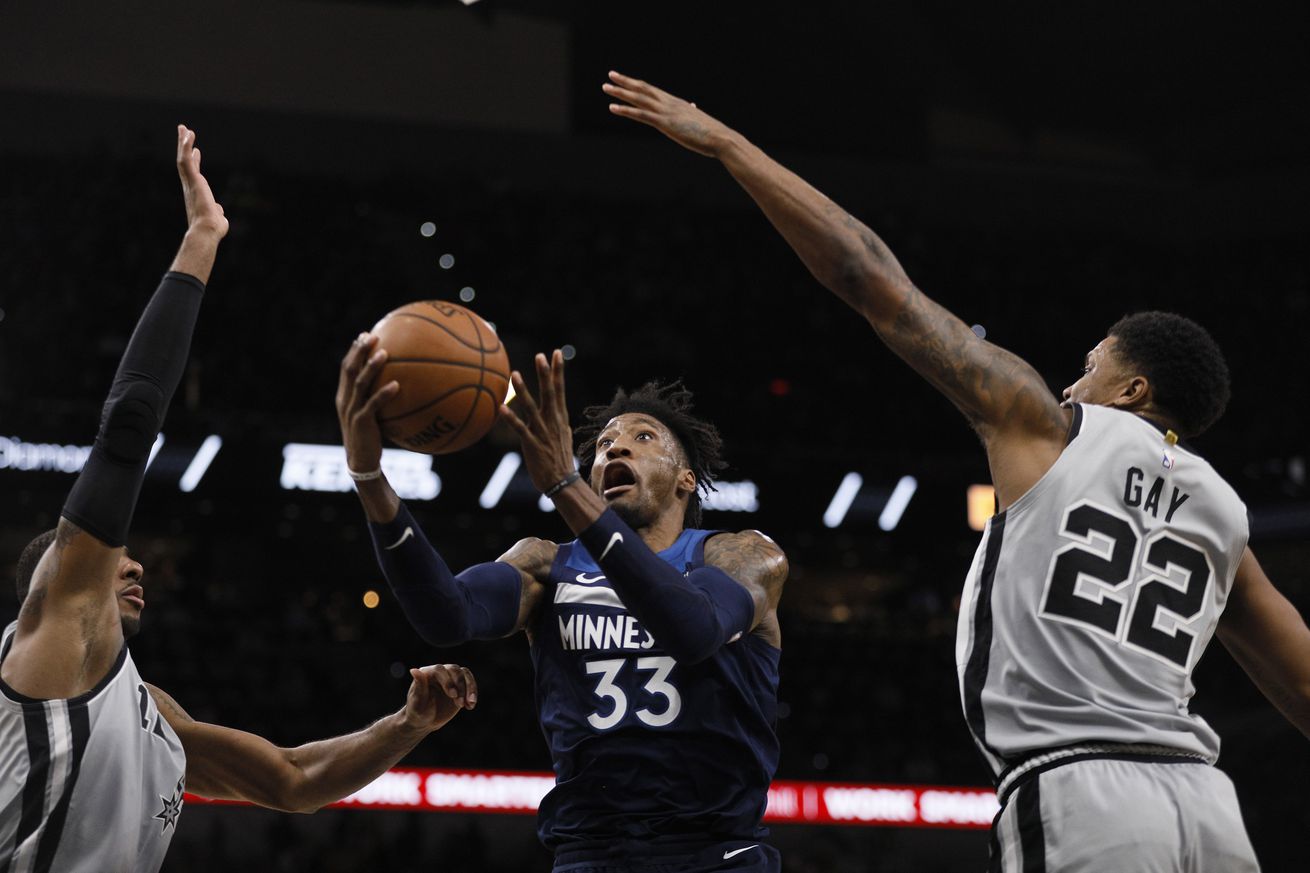 Solid defense and a big man on the block … sound familiar?

The version of the Spurs the Timberwolves saw on Friday night has almost nothing in common with the team they played three weeks ago. The Spurs suffered two more 30-point blow outs that week after getting run off the court in Minnesota, but have undergone an incredible transformation since. They’ve outscored their last 8 opponents by an absurd 176 points.

The very first play of the game showed how.

Karl Anthony-Towns gets enough of Derrick White on the screen to put Derrick behind the play. It doesn’t matter because Rudy is already planted in the way, so Derrick Rose pulls up short. Robert Covington is lifting out of the left corner, but with Towns rolling through the passing lane and Bryn Forbes in good position, there’s no advantage there. Taj Gibson isn’t a 3 point threat, so he starts to cut to the basket.

Rose tosses him the ball but Rudy’s got his hands up and deflects the pass. Gibson gathers the momentarily loose ball and faces up. Andrew Wiggins, in the strong side corner, tries a backcut on DeMar DeRozan, which almost certainly would have worked three weeks ago, but Demar is ready and sticks with him, hands up, all the way through the cut.

With room to work, Gibson makes a move baseline and turns his back to post up Rudy. The shot clock is already down to 7, and Gibson can’t see him coming, so Derrick doubles. He reaches for the ball down low, but Gibson raises up to kick the ball out to Rose at the 3-point line, putting the Spurs into a rotation.

Bryn saw the double and was ready to close out, so Rose swings the ball to Covington on the left side of the floor. DeMar was ready, too. Covington fires the ball down to Wiggins in the left corner, but White is already there. With just a few seconds left on the shot clock, Wiggins takes a contested three and Rudy pulls down the one-handed rebound.

This is essentially perfect defense considering the players both teams have on the floor. Possessions like this are why the Spurs have the lowest defensive rating in the league over the last two weeks. You can check out some more of their best defensive efforts on the night here.

But this game wasn’t just a defensive show, the Spurs also put up 124 points in just 99 possessions. As Bruno mentioned in the recap, Coach Thibs had some nice things to say about postups. Though the Spurs only shot 1 of 7 on postups on the night, it appears he was right. The Spurs had a field day passing out of the post.

The crisp ball movement, relocating shooters, timely cutting, and most importantly, 6’ 11” Texan nobody on the Wolves could handle in the post made these plays work. The Spurs scored 21 points on 17 possessions that included post ups and drew 2 fouls without a single turnover, despite their post players shooting poorly.

The postups, solid defense, ball movement, and barrage of long distance shooting made for an interesting mash up of Spurs basketball of years’ past and the NBA in 2018. The ball movement in particular brought back some memories of the 2012-2014 squads. It was evident throughout the game, and though they got a little ahead of themselves at times, giving up 16 turnovers in the process, the results were mostly good and definitely indicative they haven’t hit their ceiling yet. There’s a genuine possibility they’ll be able to find the beautiful game again, at least with bench heavy units, though if their defense keeps playing like this, they might not need to.