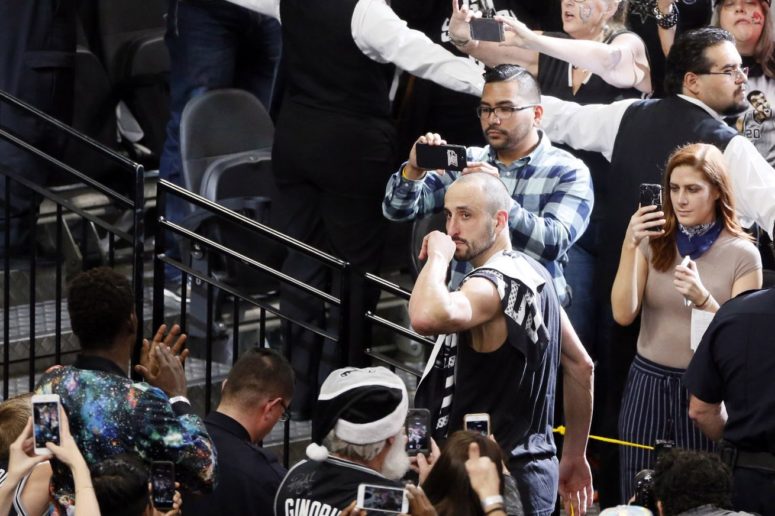 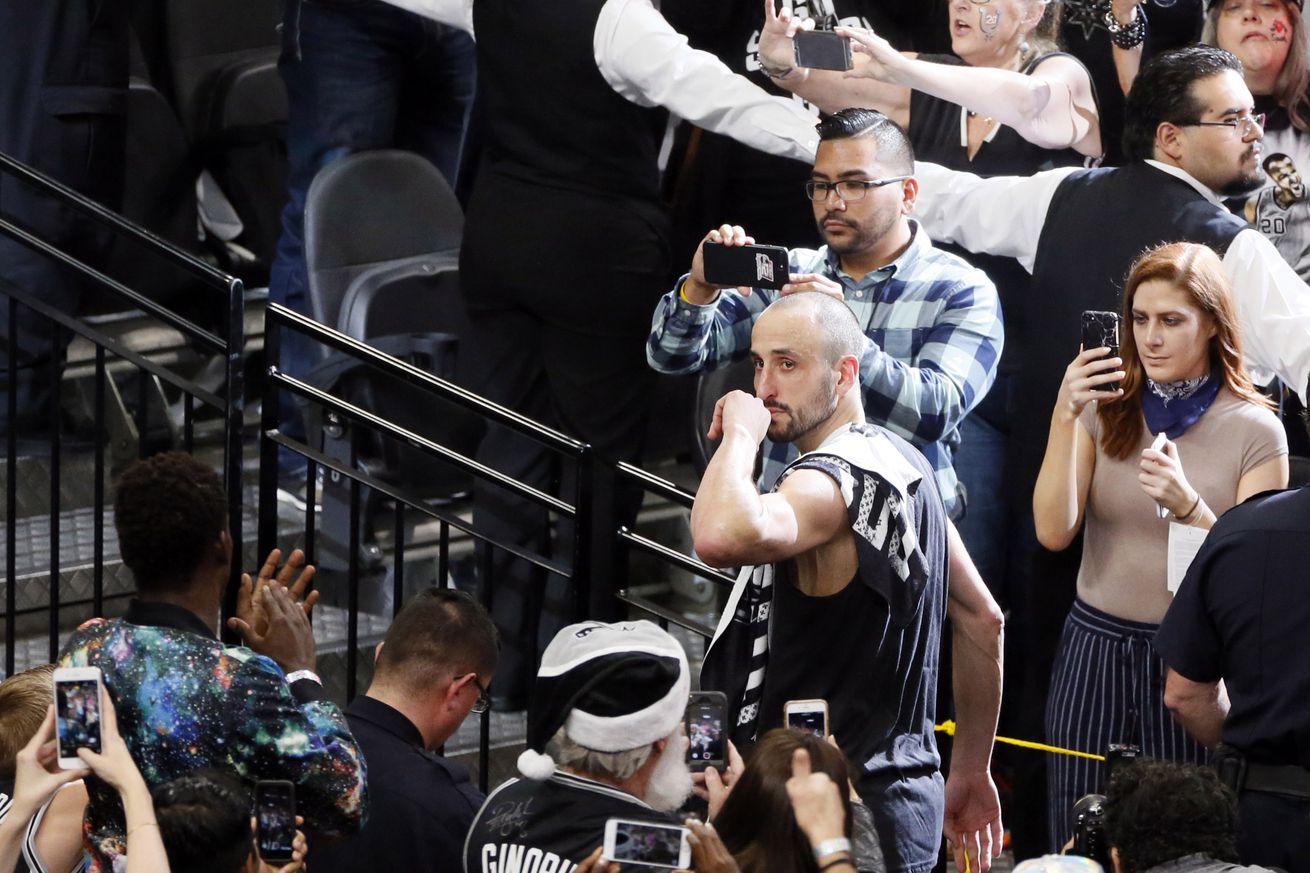 For being the biggest Manu homer on the planet, I sure can be cynical about the guy.

I was so sure he was gonna have a quiet game tonight, something like 6 points on 3-of-9 shooting, with 2 assists and 2 turnovers. I just felt he’d be too drained, physically and emotionally, to give much in Game 4. Honestly I can’t remember the last time he played well in consecutive games. Has it happened this season?

Well, he has now. He was probably one of the Spurs two or three best players in the game. He finished with 15 points and 7 assists against the best team on this planet or any other, a couple months shy of his 40th birthday. Those numbers are better than his career averages in the regular season or the playoffs, if you were wondering. He was especially good in the fourth quarter, making his last three attempts and adding a couple of dimes. If this is indeed it for him, it was a helluva way to go out, with the whole arena chanting his name, the announcers tossing verbal bouquets at his feet for two-and-a-half hours and MVP’s like Stephen Curry and Kevin Durant clapping in tribute as he made his way to the bench with a couple minutes to go.

It was a weird, ominous night. The feeling of a sendoff was palpable from the outset, with Gregg Popovich announcing that Ginobili would be starting for the first time all season and for the first playoff game since the 2013 Finals (where the AT&T Center crowd serenaded him then, too). Pop made it clear after the game that the gesture had nothing to do with strategy but rather it was in tribute to Ginobili if indeed it was to be his final game. 3-0 series deficits can be liberating that way.

The way the fans acted throughout the game, the classiness of the Warriors toward him all series long and particularly interim coach Mike Brown’s comments on the podium afterward all had the unmistakable air of finality to them. It wasn’t funereal, exactly, more celebratory as Ginobili described it, but no matter how many signs seemed to indicate that we’ll never see him play again, Manu refused to budge from his position that he his mind isn’t made up.

Obviously I want him to return, that’s no secret. I’d want him to be a Spur if he was a paraplegic. And the last few games of the playoffs showed he can still do some things when given the opportunity (even if he was a minus-million tonight against the Dubs). I’m more hopeful about him now, even as he’s approaching 40 and every indication is pointing toward retirement than I was the past two seasons. I don’t know if that makes me stupid or naive or just in denial but these past two games have driven home the point for me that I’ll never say never with Manu Ginobili again.

The whole recap can’t be about Ginobili of course and I thought Pop made an excellent point during his presser about the Warriors. In all our venom and spite about Zaza-gate and Durant choosing to play there sometimes we’ve forgotten —I’m guilty of this too— that having the best talent is not the be all and end all. The Warriors don’t just throw their jerseys out on the floor and expect to roll people. They play hard-nosed defense, scrambling and rotating like mad and covering for one another. They share the ball more beautifully than any team since the 2014 Spurs and (I’m sorry) perhaps even better than them. Unlike the Thunder, the Rockets or even the Cavs who use one primary creator to get three-point looks for everyone else, the Dubs have several guys who can make the pass and a bunch of others who can at least keep the chain moving. Even if Curry and Durant weren’t aliens, they’d still be a handful. These guys won 73 games last year without KD, after all and would be the two-time defending champs if not for Curry’s knee injury, Draymond Green’s tempestuousness and about eight other fluky things that didn’t go their way over the final three games last year.

There’s nothing to analyze. The Spurs never had a chance tonight. Not even a speck of an iota of a prayer of a chance. The Warriors three stars were all phenomenal, the three best players on the floor by a country mile. Klay Thompson was crap, as he’s been all series, and it didn’t matter at all, proving the folly of the team’s incredulity that he was left off the All-NBA teams. He’s a good player, a borderline All-Star and someone who when he’s hot is as unstoppable as anybody, but he’s clearly the Ringo of this operation and don’t you ever forget it.

If Kawhi Leonard was healthy all series and could’ve bothered Durant a little and if Thompson stayed cold in this hypothetical world and if Leonard’s presence on offense freed up LaMarcus Aldridge instead of the Warriors swarming him in the post for three games, maybe things would’ve been different. We’ll never know. I guess we’d also have never known that Ginobili still had this left in him given the opportunity. Life works in mysterious ways.

Obviously my first preference would be for the Spurs to win. But I’m just saying, if they were going to lose anyway, seeing Manu ball out and having a big ol’ asterisk to hang our hats on over the summer isn’t that bad of an outcome.

Speaking of life working in mysterious ways, remember this story where I pointed out that every Spur who proved to be worth a darn wound up playing significant playoff minutes as a rookie? For a while there, it didn’t look like it was going to happen for Dejounte Murray, who had Tony Parker and Patty Mills playing in front of him, with The Wee Frenchman playing quite well at that.

So, in what quite possibly was the final game for Ginobili, who previously held the Spurs franchise record for most steals for a rookie in a playoff game with 4, Murray had 5 against the Warriors on Monday, while finishing with 9 points and 7 assists. I think the forward-thinking move for Pop, regardless of Ginobili choosing to retire or not, would be to transition Parker into the sixth-man role Manu made famous for the better part of his career, handing the reins over to Murray.

Here is a list of Spurs who played more minutes in an elimination game than LaMarcus Aldridge did:

Pop’s explanation for this was “We were down 40.” It’s also worth remembering that Aldridge is likely carrying some kind of undisclosed injury. Still, I’ve seen this movie before. The Spurs will never, ever, EVER, publicly say a negative word about one of their own, no matter how much the public turns against them and even the coaching staff seems exasperated with them during the games. But those guys wind up being shipped out all the same, with the Spurs continuing to not say anything negative about them in public afterward.

And then the truth comes out in some podcast years later.

Raise your hand if back in October you were expecting Bryn Forbes to play 24 minutes in an elimination game. In fact, let’s go ahead and make a poll about all the weirdness of this game.

It will take a while to fully digest the season. I don’t think the Spurs overachieved or underachieved. They finished exactly where they should have, and overall I think they were a better club than last year, even though the regular season record was worse. There were a ton of injuries, but it afforded the young guys the opportunity to develop at an accelerated pace, with mostly positive results. I am optimistic for the future and don’t think the team’s salary cap restraints are as dire as it seems on the surface (a topic we’ll discuss in the near future, I’m sure).

There’s the Warriors and there is everybody else, of course. But if the best of that “everybody else” are one-star squads like Houston or Oklahoma City then why not be confident about the future? The Spurs have the best player in the conference. That’s not changing anytime soon.

Manu is right. This is a celebration, not a funeral.