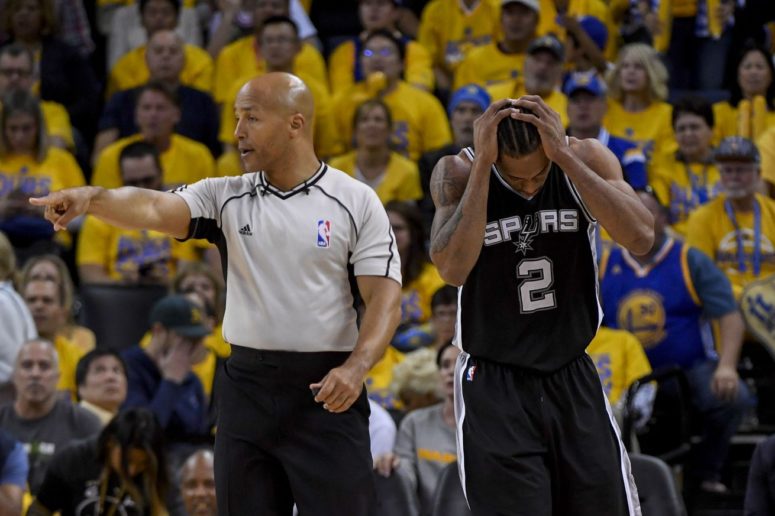 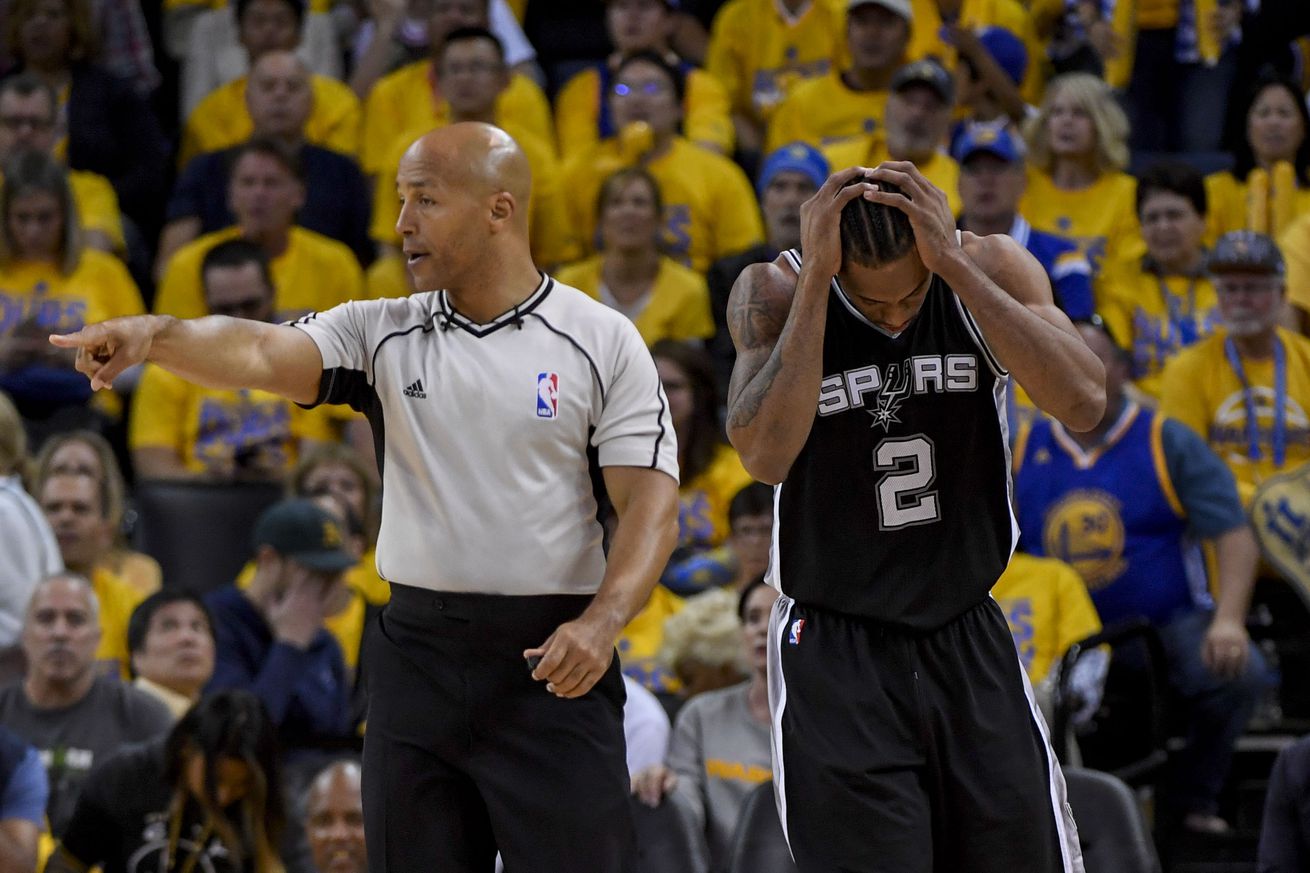 KD had it wrong. It turns out that Zaza the real MVP

Well, aside from that how was your Mother’s Day?

Sorry. You’re probably not in the mood for gallows humor. Of course you’re not. That’s literally the whole point of gallows humor. You’re angry, frustrated, upset and probably sad, most of all. And I’m right there with you. If you follow my timeline on Twitter then you know I was an absolute psychopath during the game and for a good hour afterward. It’s not fair, man. It’s not fair.

Well just stop whining already. All of us. Gregg Popovich would think we’re acting like a bunch of spoiled babies. His daughter definitely would.

(as Pop shared to the legendary Buck Harvey about the summer after the 2013 Finals):

“Shut the hell up,” Popovich tells himself. “It’s not all going your way.”

His daughter, Jill, told him something similar this summer. With a personality she clearly gets from her father, she said:

“OK, Dad, let me get this straight: You won four championships, and you go to a fifth Finals. Other coaches lose all the time. But poor Greggy can’t lose because he’s special. Can you please get over yourself? End of story.”

He stared at her — then started laughing. Hadn’t his daughter told him the same get-over-yourself line he’s told so many others?

“That started me on the path to recovery,” he said.

The way I look at is this: 2014 was our sports movie ending. Everything about it was perfect. Most fanbases don’t even get one and here we are asking for a sequel to be better than the original when sequels almost never are.

All I know is that I’ve never been prouder of a Spurs team in any single game than I was on Sunday afternoon, and that’s saying something considering they just closed out the Rockets on the road by 40 a couple nights ago without Kawhi Leonard.

No, everything did not go swimmingly once Leonard, who had been playing spectacularly before leaving the game for good with 7:52 remaining in the third quarter after spraining his ankle twice in a span of 1:28. The Spurs were outscored 58-33 over the final 19:52 and a bunch of those 33 points felt fortunate and fluky to be perfectly honest.

But they were heroes out there, in the classic sense of the word. And if you know your literature, then you know how it usually goes for heroes.

With Leonard sidelined and Tony Parker —God, how the Spurs missed The Wee Frenchman on Sunday— absent the Spurs had to seek offense against an onrushing tide from someone, anyone. They had Manu Ginobili, 39, playing perhaps his best game of the playoffs and findings ways to finish inside, repeatedly, against Draymond Green, scoring more baskets inside the paint than he has all season. They had Dejounte Murray crossing up and finishing over Kevin Durant in the fourth quarter of the Western Conference Finals, thinking nothing of it. Jonathon Simmons and Kyle Anderson, two relative young pups in terms of NBA experience and guys who were supposed to be battling for the 10th man job and spot minutes as Leonard’s backup, were throwing their bodies everywhere and making things happen. They were heroes, no matter what the plus/minus numbers said. I don’t know how any of them could’ve possibly played any harder.

Maybe it’s better that it happened this way, with the Spurs putting the love of the Flying Spaghetti Monster into the Dubs for 28 minutes. My heart really couldn’t take another five, six of these. I kind of surprised myself with how much I cared, actually. I haven’t rooted that emotionally for anything since Game 7 against the Clippers a couple years back. At least now we can have an asterisk to cling to.

For 28 minutes the Spurs played as well as they possibly could. Leonard was a monster on both ends, showing no ill effects of the ankle injury that kept him out of Game 6 against Houston. Aldridge was picking his spots and scoring efficiently. Danny Green was playing terrific defense all over the floor, the bench with Ginobili and David Lee was badly outplaying their Warriors counterparts and even when Stephen Curry went supernova to start the third quarter the Spurs kept finding threes to counter him from Aldridge, Simmons and Leonard. They were out-hustling the Warriors, outsmarting them and dominating in the paint, 34-to-12.

And then the dastardly Zaza Pachulia did what he was signed to do, play recklessly without fear of consequences, so it all went to hell. This is why the Warriors went out and got Kevin Durant. So that the second-best team in the league can thoroughly outplay them for a half, battle their guts out for another, oh, 21 minutes in the second half, and for it to still not matter. Klay Thompson was complete rubbish out there —he literally couldn’t have played worse if he was a secret agent— and it did not matter. They got next to nothing from their bench and… well you get the gist.

Give Curry and Durant credit. They’ve won the last three MVP’s for a reason. Even without Leonard, two guys combining for 46 against the Spurs in a half is no joke. Some of the shots they made were easy and some were difficult but they were all annoying. And the Spurs did finish with 111 points in regulation. That should’ve been good enough to win against anyone, regardless of circumstance. It’s on them that they couldn’t get the stops, and certainly rebounding is a major part of that. The Warriors missed only 17 shots in the second half. The Spurs rebounded six of them. Long shots lead to long rebounds and all that, but it’s the biggest reason, aside from the obvious one, why the Spurs couldn’t pull this one out.

This hurts, I’m not gonna lie. It hurts a lot. Does it hurt worse than Leonard’s ankle is hurting him right now? Does it matter? The only comfort we have is that A) Game 3 isn’t ‘til Saturday B) the way the young guys scrapped shows that the Spurs are going to be all right, in the grand scheme of things and C) there are a whole bunch of teams that’d love to whine about how hard the pursuit of a sixth championship is going.

The broadcast showed a bit of Steve Kerr, in a sweatsuit, talking to his team at half time, which had to be a little awkward for interim coach Mike Brown. First off, it goes without saying that all of us at PTR wish nothing for the best for Kerr from a health standpoint. But the clip they showed was the same generic coach mumbo-jumbo they always show during the “live wired” segments coming out of time outs.

Juuuuuust a guess here, but I bet there was substantive stuff from Kerr during that talk that the cameras couldn’t show, for strategic reasons. The Warriors tweaked their attack to get Curry a lot more involved on screen rolls and Patty Mills got obliterated on screens again and again with no big hedging out.

As well as Aldridge played in the first half, he was that brutal in the second. Two defensive rebounds in 20 minutes is inexcusable in and of itself, but his shot selection left much to be desired. Pretty much nothing good happened for the Spurs whenever he had the ball in his hands for more than a half-second. He couldn’t budge Draymond Green an inch. He couldn’t hit any of those corkscrew fadeaways. There were the FIVE turnovers. It was uncanny, either he was getting swarmed or he found himself in positions on the floor where the Warriors were perfectly comfortable with him shooting. His inability to make the proper decision quickly was a killer.

I don’t know what the Spurs hope to accomplish with his post-ups, I really don’t. If Green isn’t the best post defender in the league he’s in the top three. His wingspan is just as long as Aldridge’s and he’s freakishly strong, with a low center of gravity. This isn’t like posting up James Harden, hoping to sap his energy on offense. The Warriors don’t rely on Green for offense. The Spurs shouldn’t have been this out-of-sorts without Leonard, not when they just had a game playing without him —albeit against much lesser competition.

You’ll never guess who finished with the highest plus/minus in the game. Oh wait, you totally guessed it.

Why not just let Durant carry the ball all the way down the court like Ezekiel Elliott next game?

Seriously, six defensive rebounds for a half. The Spurs averaged one pull for every 11.5 Warriors second-half points.

Sorry I usually think of tons of these blurbs and I delude myself into thinking that they’re witty and informative but I just don’t have any more today. I’m heartbroken about that stupid game.