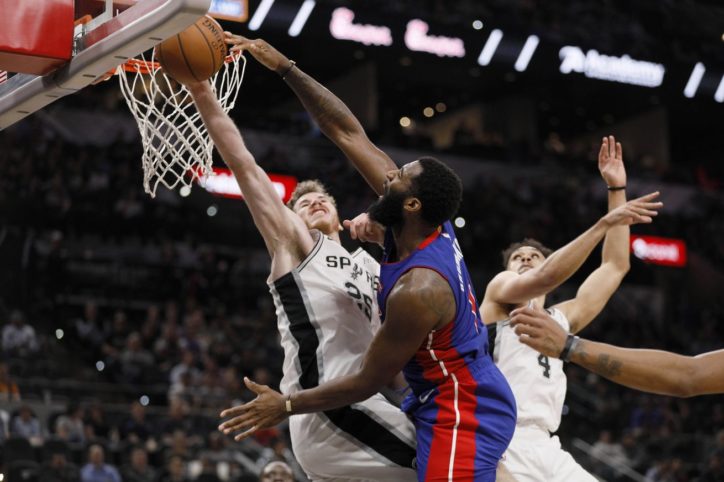 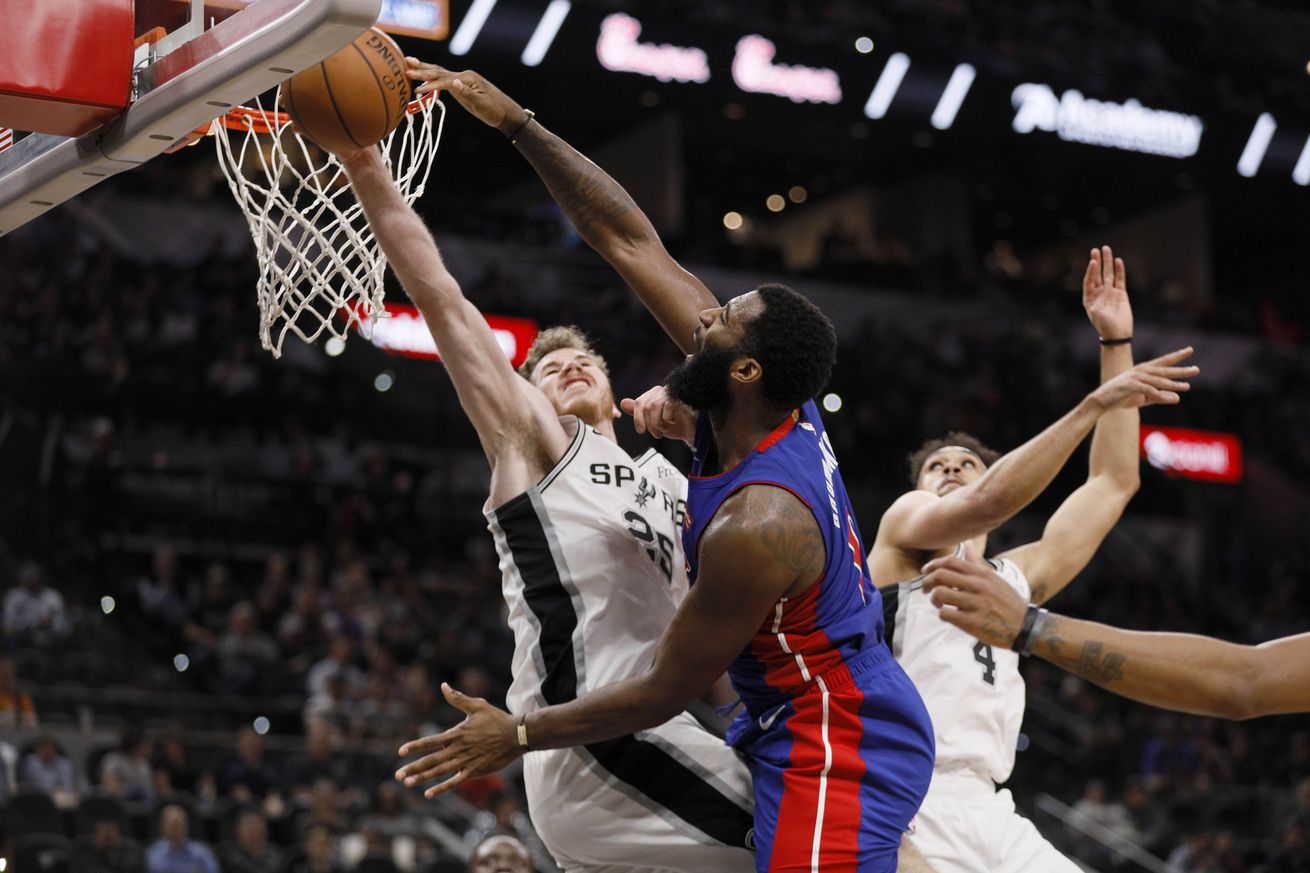 Fresh off a disappointing Rodeo Road Trip, the Spurs rode a strong defensive performance to get back to their winning ways, downing Detroit, 105-93.

Minutes before the Spurs’ Wednesday tip-off, a promo on the AT&T Center jumbotron showed players talking up the energy and positive impact that the San Antonio crowd brings to games, followed a short while later by an extended sample of Thin Lizzy’s The Boys Are Back In Town that blared through the opening tip. The message, depending on how you want to look at it: We’re home!, or, Thank God we’re not on the road anymore.

That sentiment carried on through to the final horn, as the Spurs snapped their three-game losing skid and defeated the visiting Pistons, 105-93, the fewest total they’ve allowed since the beginning of January. They’re now 23-7 in the AT&T Center, where they’ll play 11 of their remaining 19 games.

While the Spurs haven’t resembled their usual selves for much of this season, they were downright unrecognizable over the last three weeks, posting the worst Rodeo Road Trip record in team history (1-7), as well as the league’s worst defensive and net ratings over that span. Even with last summer’s significant turnover, it’s still jarring to see the team struggle as it has on defense after long hanging its hat on that end of the floor.

Because San Antonio currently ranks 23rd in the league in that area, and because Gregg Popovich’s squads haven’t finished worse than 11th since they drafted Tim Duncan, I asked the Spurs coach what that meant for this team’s identity — if he even bought into such a thing:

“We’ve always felt that we could always depend on our defense, you know, even those nights where we’re shooting like we did in Brooklyn,” he said. “I thought their effort was great (versus the Nets) — they did a lot of good things — but if you’re 4 for 24 for three you’re gonna have a hard time winning. We haven’t been able to count on that defense. We used to even call it ‘stops on demand’, where at certain points in the game you could get stops and you could always depend on it. Because you can’t always depend on shooting. We haven’t acquired that identity yet.”

‘Stops on demand’ is a Spurs-ism whose origins predate any current member of this team, one that hasn’t seemed capable of regularly generating them — at least not ‘yet’, as Pop noted. While time is running out for them to recapture that defensive identity, they looked, for at least one night, more capable of turning away shots, deflecting passes, and making life tough for an opponent that came in having won 7 of its last 8.

It began with Jakob Poeltl getting the start at center, allowing the Spurs to better match up with the bigger frontcourt duo of Blake Griffin and Andre Drummond. The 23-year-old responded with one of his best games in a Spurs jersey, helping defend the rim, keep the league’s leading rebounder in Drummond off the offensive glass, and finishing on pick and rolls. An emphatic block on the Detroit center with two minutes to go served as a fitting lasting memory on a night he put up 11 points, a career-high 14 rebounds and 3 such rejections.

The effort was there across the board, with Pop alternating between man and zone schemes to try and keep Detroit guessing. We’ve come to expect Derrick White (healthy and apparently feeling better with each game) to do his thing at the point of attack and LaMarcus Aldridge to anchor the defense as best he can, but everyone from Patty Mills and DeMar DeRozan to Marco Belinelli and Davis Bertans moved their feet well, got into passing lanes, and did a great job contesting shots without fouling.

“When you play good defense you have a chance to win games,” said Pop afterwards. “When we were at our best this year for that one run, we were first, second, third in every category — defensive efficiency and all that sort of thing. And all of a sudden, it went bye-bye. We have to have a great effort defensively, especially the first game after a road trip like we had. We dug down and showed a lot of character tonight, played physically, just did a wonderful job defensively.”

The Spurs’ December level of play that Pop alluded to feels nearly as distant as the many seasons in which they routinely held teams in the low 90s, thanks in part to the recently concluded Rodeo Road Trip. We’ll see if tonight’s performance, and some additional time spent at home, helps them trend back towards that old likeness.

A balanced offensive performance helped, too

Strong nights from Aldridge (24 points), DeRozan (17 points, 13 rebounds, 8 assists), Belinelli (17 points, 5 rebounds) and White (15 points, 6 rebounds, 4 assists) left a bit of breathing room to complement the strong play on the other end. The Spurs as a team shot 52% from the field and hit 9 of their 17 tries from beyond the arc.

Spurs’ league ranks over the span of the Rodeo Road Trip

(All stats from NBA.com)

On Wednesday night? Offensive and defensive ratings of 111.7 and 98.9, respectively, and an effective field-goal percentage of 57.4%.

The Spurs guard went down in the first quarter, requiring assistance to get off the floor and back to the locker room. While Forbes did not return (he was ruled out with a calf contusion), the Athletic’s Jabari Young did have this to say about his status after the win:

As of now, no MRI scheduled for Byrn Forbes… said he’s sore but should recover in a few days #Spurs

Some quotes on DeMar from his former coach, Dwayne Casey

The former Raptors coach had plenty of praise for his former player during his pregame availability. Here are a few quotes:

Although he may no longer be public enemy number one in San Antonio, Zaza Pachulia still heard it from the crowd multiple times — first when he entered the game, followed by a murmur of jeers during a trip to the free throw line, ultimately culminating in a cathartic outpouring after the Pistons big followed up a missed layup with a frustration foul in the backcourt.