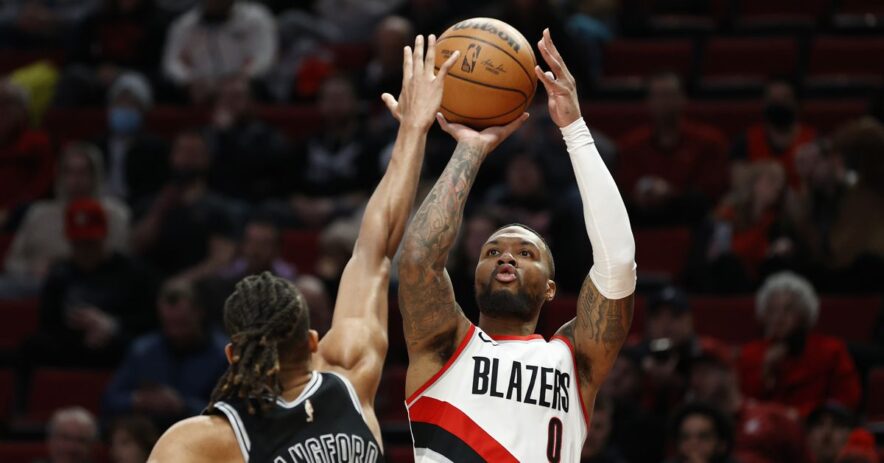 We’re each the hero of our own stories, but you might sometimes feel it a bit more. Like if you’re facing the team that drafted you, in Zach Collins’ case. Or for that matter like Drew Eubanks, putting a little more into screen and each rim contest against your former squad. But mostly if you’re Damian Lillard with a live dribble within 45 feet of the basket. For everyone else in the building, that sense of self gets a touch out of focus, at least in the few moments after another unconscious bomb from deep.

The Spurs went toe to toe with Lillard and the Blazers in the first half of their Monday-night, San Antonio ultimately falling, 147 to 127. San Antonio caught Portland not only on a SEGABABA but coming off one of their most deflating stretches of the year, losers of 3 straight. That’s a schedule advantage in some ways, but I’m sure there’s a Bill Simmons theory about sneaky trap games as an opponent aims to save its season. Either way, the easy rout recast Lillard (37 points, 12 assists) in a familiar role as savior and the Spurs’ porous D as a credible backdrop.

The defense-is-optional quip gets made a lot in today’s NBA, and was especially a theme around the league on the night — Portland and SA were level at 74 at halftime, the Bucks hung 150 on the Pistons, and the Kings put together a 47-point quarter against Memphis — but it’s been especially dominant for the Spurs. Monday was the 15th time they’ve given up over 130 points, the 11th and 12th times they’ve given up 40-point quarters, and the most an opponent has scored on them this year.

And because the Spurs had their share of good offense, there are still plenty of positives for them to exhume from the loss. Rookie Jeremy Sochan had 18, 6 and 4, making both of his threes (great) and 6 of his 8 one-handed free throws (outstanding, borderline unimaginable 6 weeks ago). There was more progress in Keldon Johnson’s (20 points, including maybe his most impressive reverse layup) long and winding road to rediscovering his three-point shot. He shot 3 of 7 from range, finding most of his luck in the corners. Romeo Langford (12 points, more frisky forays off the dribble) continued to trend upward.

The former lottery pick has needed health and opportunity to get to where he is this season, having now started more games as a Spur than a Celtic in his young career, and it’s the visually improved confidence that will probably take him to the next marker.