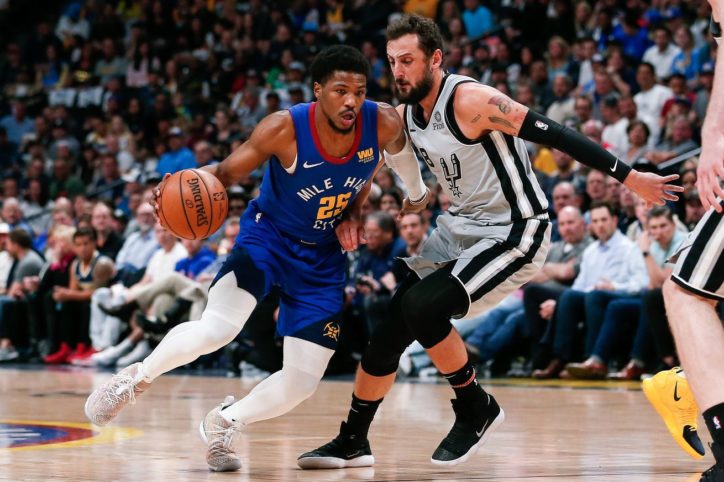 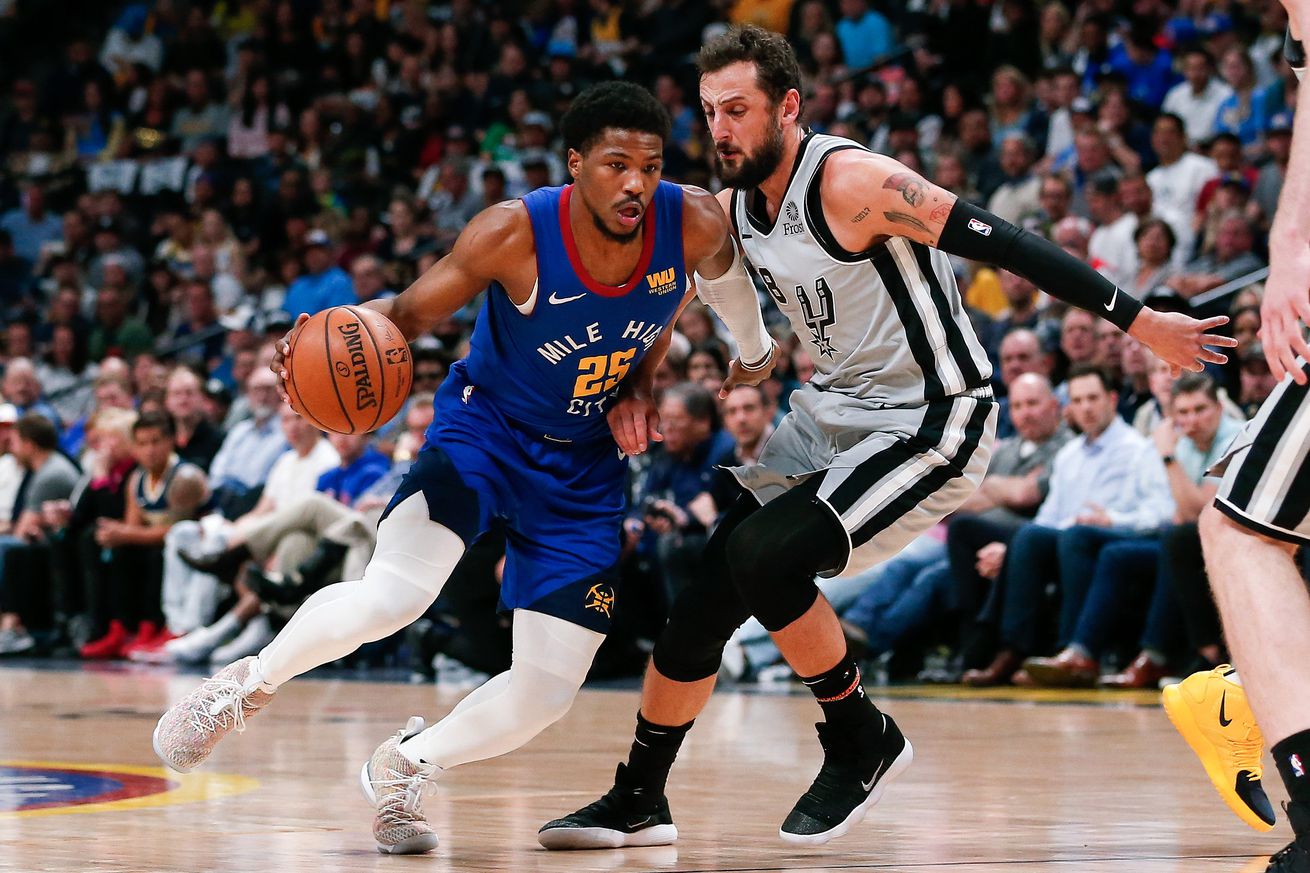 Today we continue our journey back through “Marco Watch,” coming off a strong finish to the regular season and into a tough-but-not-impossible match-up with the upstart Denver Nuggets. If you missed anything up to this point, you can catch up here.

With the playoffs starting, it was hard to know exactly what to expect from Marco Belinelli. Whimsically poking around the corners of the game during the regular season is one thing, but the postseason is a different animal. The intensity gets turned up, the benches get shorter, and everyone is a little more resistant to the idea of having to rely on on a guy whose whole ethos is pretty much, “you never know what to expect!” Would we get clutch threes from the corner, or would we be left standing around, covered in confetti, and wondering what just happened? The answer, as it turns out, was kind of a mixed bag.

I think we were all ready for Marco to go out on the court in the first playoff game and really go bananas. We wanted some of that good old fashioned Folk Hero stuff, ya know? The twenty points off the bench, hair on fire, which-way-is-up type of game. We were ready for that. Instead, we got “bad” Marco. Missing shots Marco. Drifting aimlessly around the court Marco. This was not one of the night’s we’ll write songs about but, if Marco has taught us anything this year, it has been patience. Not just any old patience either, but patience in the face of the absurd, random realities of our own existence on this planet. Why does the Sun keep rising every morning? Why does your knee hurt when it’s about to rain? Why does Marco think it’s a good idea to launch that shot when his feet aren’t set and he has six hands in his face? I don’t have the answers, you don’t have the answers, and Marco definitely doesn’t have the answers. The only certainty we have is that nothing is certain at all. This is the chaos Marco has embraced and this is the context with which we must understand him. He didn’t have a bad game tonight, not really anyway. He simply had another roll of the dice.

There was a moment, early in the first quarter, where I thought the magic might be with us. Close watchers of the Marco movement will instinctively know what I’m talking about. A normal corner three from Marco Belinelli is fine. Sometimes he’ll go off the dribble and knock down a little mid-range shot and, yeah, 2 points is better than no points. Totally. Good for us. But these plays are never really an indication that Marco is whipping up something good. It’s just standard fare, a professional man carrying out his professional duties in a quiet, efficient manner. This game though, in this game we had a giant comet blazing across the sky foretelling of a glorious future in which absurd threes would rain down from on high and wild off balance layups would bless and astound us in equal measure. In this game we saw Marco come around to the top of the arc, catch, fire, and collapse his body into what can only be described as shapes. Gary Harris, unable to wrench himself away from his destiny, made contact with our glorious, withering mass of a man as his shot floated emphatically into the hoop like a dream. “Here we go,” I told myself. “Marco is about to turn this thing inside out, stand it on it’s head, and put it in a museum.” Every fiber of my being was ready for the oncoming display. Alas, it never came. Marco drifted around, looking for his spots and finding none. I sort of wasn’t quite sure what to do about it. Perhaps I missed something, or maybe in the heat of the playoffs I had accidentally gotten lost in my own earthly desires for something beyond what was being offered unto me. I felt I was owed more and Marco, for all of his many redeeming qualities, is not someone who gives things on command like some sort of vending machine. You don’t put in your dollar bill, press C7, and quickly get delivered a cold, refreshing can of divinity. That’s not how this all works. Marco is a sculptor. He molds genuine moments of beauty out of the raw clay that life provides and that, my friends, is where his magic truly lies. When inspiration strikes, he is there to be a conduit for us mere mortals and when inspiration has decided to pay only a brief visit before spending time with a specific member of the other team then, well, Marco is bound by his principles to continue on his own path towards enlightenment, confident that his muse will return when she is ready. May we all have the strength and will to do the same.

Four-point play for The Professional! pic.twitter.com/uHMlKooZsW

After that 16-0 run in the 2nd quarter, I had about a minute of really thinking that the Nuggets might just run away with this one. They had all the momentum, they looked comfortable, and what had once been a fired up home crowd was now quietly sipping their drinks while casting furtive glances around at each other. It was bleak. We needed something special to snap us out of our funk and then, in our darkest hour, DeMar pushed into the lane and let the Nuggets defense collapse around him. Out of the corner and, frankly, out of the darkness, a resplendent gunslinger rode into the picture and appeared before us on the wing, wide open and ready to go to work. I’m honestly not sure that DeMar even saw him so much as felt his presence in that moment. The ball flew out of his hands towards Marco as if drawn by a magnetic force and then, in the blink of an eye, it was soaring back through the air and neatly settling home at the bottom of the net. The crowd erupted and, all of a sudden, the game was back on. It was important. It necessary. It was business as usual for Marco Belinelli. This may not be a series in which we will see him light on fire and carry the Spurs to victory single-handedly, but he can instead provide moments of inflection for when things have become flat or stale. He can jump start the team out of a haze and light the spark that ignites the fire that carries us to glory. To quote the Grateful Dead, “Every once in a while you get shown the light, In the strangest of places if you look at it right.”

Three for The Professional pic.twitter.com/Icp04I7P6A

Marco Belinelli hit a three with 1:07 seconds left in the game. Lonnie Walker IV dribbled around the top of the arc, turned, and fed it to Beli who was wide open. He caught it. He shot it. It went in and the Nuggets lead was reduced to 12. It was heartbreaking to watch if I’m being perfectly honest. There was no joy, no creativity, and no energy behind it whatsoever. It was a rote exercise, something that happened just because. If the shot had gone and rimmed out, well, the only thing to change would be the opening sentences of this paragraph. It’s tough times out there for us Marco Watchers. I think we all want something special to happen. We want Marco to provide that special jolt that only he can provide and it’s been largely absent from this series. Time and again though, he’s shown us that this is simply not how his particular brand of magic works. It’s not something you summon on command because you want it, no, it’s more ethereal than that. It’s a fickle, puckish creature that comes and goes at it pleases, lighting up the darkness when you least expect it. It answers to the whims of no one. The playoffs are a turbocharged atmosphere with an intensity that gets ramped up to 11 and stays there. It’s an environment where miracles almost become the norm because, hey, even being here is practically a miracle, right? In the playoffs you expect amazing. You demand it, almost. Maybe that’s not a domain where Marco’s skill set was ever going to fully thrive, or maybe I’m just not looking hard enough. Regardless, Marco’s best stuff always seems to happen when I’m least expecting it and I think it’s safe to say that, well, right now we’re least expecting it pretty hard.

Check back tomorrow for the conclusion of “Marco Watch”.