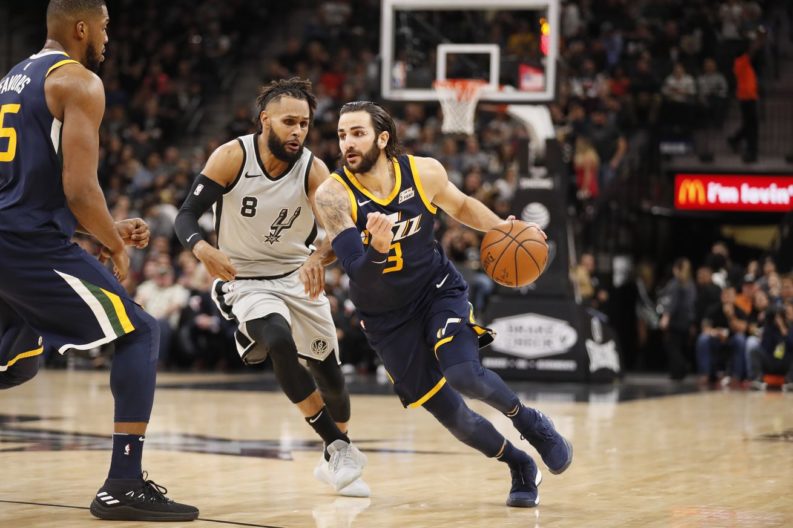 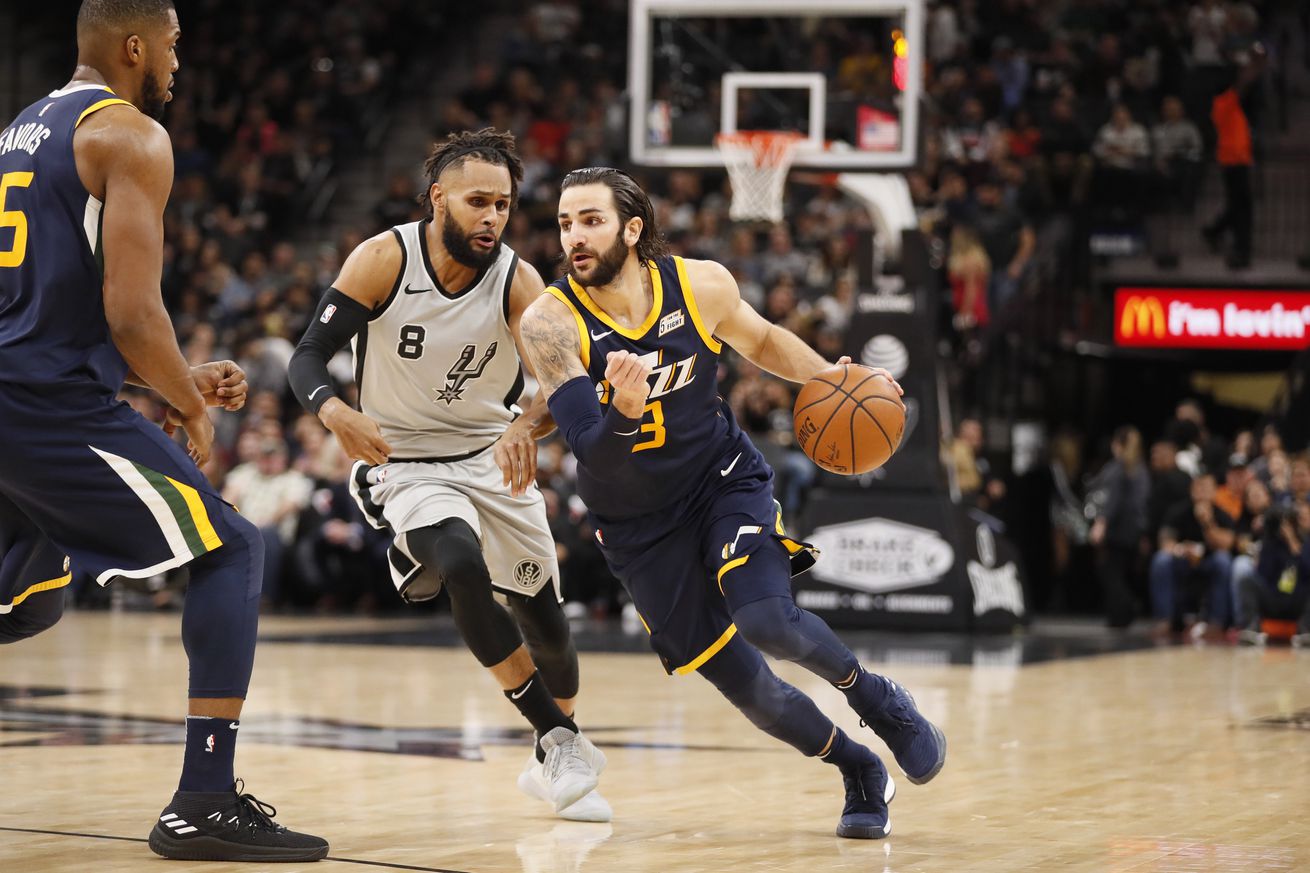 Ricky Rubio’s career night led to a second straight home loss for San Antonio, as the team heads into its annual Rodeo Road Trip still searching for an identity.

Sometimes it’s just one thing that throws an entire performance out of rhythm.

In the Spurs’ 120-111 loss to the Utah Jazz, point guard Ricky Rubio was a singular force, consistently breaking the defense down off the dribble, hitting from both mid- and long-range, and finding open three-point shooters with pin-point skip passes as the San Antonio defense scrambled with great effort but questionable purpose. Rubio didn’t miss his first nine field-goal attempts and finished with a career-high 34 points, nine assists and a game-best plus-15 on the night.

In reconciling the loss, you could look at the shot chart below for a player averaging just over 40% from the field this season and simply shrug it off as one of those once-in-a-blue-moon nights.

Doing so, however, would ignore the fact that Rubio has been red-hot amid Utah’s five-game winning streak — a fact that matters, even if Gregg Popovich reiterated once again before the game that he does not keep up with what opposing teams or players are doing.

More importantly, it’s rarely just one issue that defines a win or a loss, and the Spurs’ struggles in this poor stretch of games have come with a handful of recurring themes beyond one player’s performance.

For Pop, the loss to Utah came down to effort — specifically the lack of it by his team in the first half:

As in the loss against Philly, the Spurs coach took no questions after the game, briefly lauding his opponent’s execution, physicality and effort before saying goodbye and leaving a roomful of reporters with a touch of deja vu.

The Spurs also found themselves in familiar territory, falling behind in the first quarter and playing catch-up the rest of the way. They tried a few things to do contain the Spanish point guard, giving him different looks in the pick and roll and trying to get the ball out of his hands. The result, however, was often the same.

All fan mail for @Joeingles7 can be forwarded to the three-point corners pic.twitter.com/lZJm26U2EW

But the Spurs have often overcome those cold starts plenty of times this season, and it was thus not surprising to see them within striking distance with two minutes to go, clawing their way back thanks to an seven-minute stretch in which Pop had no less than four guards on the floor. The effort would be undone on the following play when Patty Mills turned the ball over coming off a screen:

Spurs had it close late. This steal and finish by Royce O’Neale put an end to their comeback, though. pic.twitter.com/eMjqggyjfK

Here’s Manu Ginobili, who had 13 points in 25 minutes, on the little plays that made all the difference:

“A couple of turnovers, and they hit some big shots. When a game gets that close, that’s what happens. A play here, a play there. It changes the flow of the game. We were good to get in the game — Patty made a few big plays, a few good defensive possessions — and we were right there. When you give the other team that much confidence, that kind of stuff happens.”

Spurs fans (some of them, anyway) have learned to live with Mills struggling in the pick and roll. What they’re less used to is the defensive struggles that the team has experienced over its five-game homestand. In those games, three of which have been losses, San Antonio has given up 113 points per 100 possessions, a defensive rating which would rank dead last in the league. On Saturday, Rubio and other Jazz ball-handlers found themselves consistently going downhill, into the teeth of the San Antonio defense and, as Ginobili pointed out, that’s a recipe for trouble.

“A few [defensive] miscommunications, and [the Jazz] are good… The problem was, they beat us on the first line and when that happens you’re always chasing, scrambling.”

When you pair those recent defensive numbers with another quote from Ginobili, you get an idea of where the team currently is, in terms of its identity, 55 games into the regular season:

“It feels like we’ve played 10 games. We’ve got a feeling that we’re trying to find our identity, trying to get players back… It’s a very unusual situation — I don’t remember being in anything like this in 16 seasons. And the crazy thing is that we’re still third. We’ve been seventh before in I-don’t-know-what season, and it feels like we are terrible, that we’re getting through some things.”

Ginobili knows it’s not an ideal place to be, but little about 2017-18 has been ideal up until now. After all, sitting at the end of the team’s bench is a sullen, cornrowed reminder of this season’s injustices, a player who could allay many of the team’s troubles.

Don’t expect the Spurs to pin them on Kawhi Leonard’s hobbled quad, just as they won’t hang Saturday’s loss on Rubio’s hot hand. All they can do is try to learn from it, and move on.

A few final notes on…

Another shake-up in the starting lineup

We found shortly before the game that Davis Bertans would get another start in place of Pau Gasol. While his presence helped stretch the floor against Utah’s more conventional two-big frontcourt, it wasn’t a boon on the scoreboard, as the Spurs never recovered from the early deficit they surrendered in the first quarter.

Each game is just one game, but Gasol didn’t shy away from the suggestion that getting the win before the Rodeo Road Trip mattered. Here is the center speaking on Thursday, on how much the team valued a win:

“Very important. We have five games before the break — four of them are on the road — tough, tough road trip. So, we gotta make sure we get this one against Utah… It’ll be important for us to come out on Saturday hard and sharp and be ready to get that win so we can have some type of mental confidence.”

Here’s a breakdown of the upcoming Rodeo Road Trip, a relatively short one at just six games:

Perhaps no one on the team deserves the upcoming All-Star break more than the team’s sole All-Star, LaMarcus Aldridge. He poured in another 31 points (on 12 of 19 shooting) on Saturday, to go with five boards, three steals and two blocks. Here’s the more impressive of his two rejections, sending an Alec Burks dunk attempt into the stands:

For Utah, the win is all the more noteworthy given their 5:30 am arrival in San Antonio and that they were without their best offensive player in rookie Donovan Mitchell, who was a late scratch due to the flu.