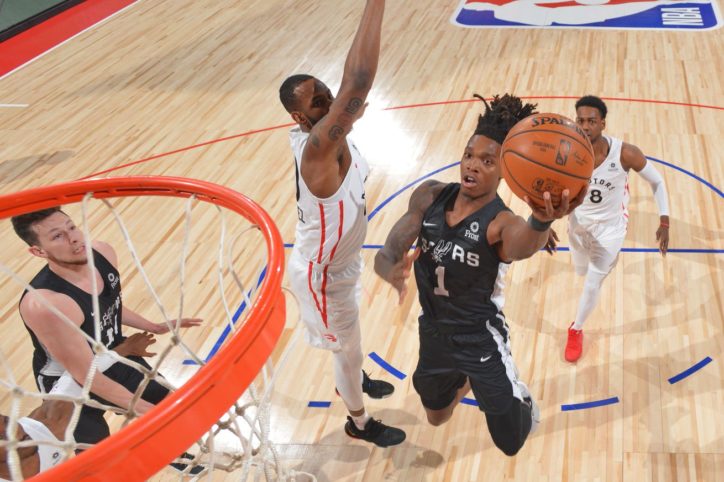 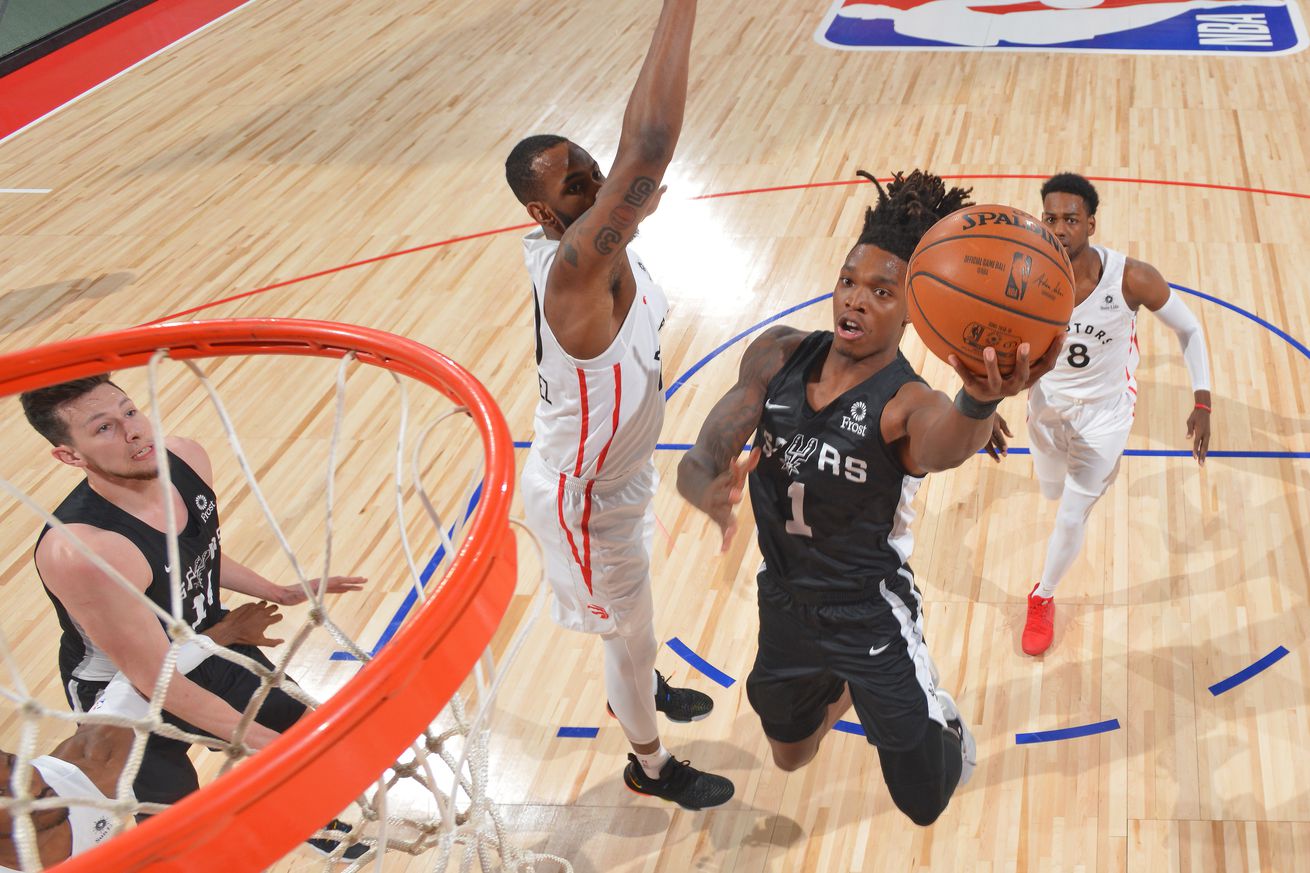 …minutes in the present sure would help.

This series is a look at each of the Spurs’ eleven under-30 players with an eye toward how they can improve in or expand their role on the team. Rather than focus on individual skills, for the most part, I’ll concentrate on what the team needs from each player on offense and defense to identify a key opportunity to have more impact.

Lonnie Walker IV didn’t spend much time with the big league club in his first year, but the little bit of time he got made quite an impression. He is athletic, even by NBA standards, with the kind of easy explosiveness that allows him to go from nonchalant to highlight reel in a flash.

More important than his hops or penchant for sky-scraping dunks, though, Lonnie’s calm approach and willingness to learn should help him grow into much more than a Summer League all-star. He has the potential for incredible impact and among all the young Spurs, may well have the best shot at developing into an All-NBA caliber player.

That’s a long way off at this point, though. For now, Lonnie’s coming off a rookie season in which he played just 77 non-garbage time minutes spread over 15 games, per Cleaning the Glass (CTG), and his numbers over that time don’t present a very compelling argument for star potential.

Lonnie made just 35.7% of the shots he took in those minutes, which would be fine if they were all threes. Unfortunately, they weren’t. He hit 50% of his shots at the rim, 25% in the midrange, and 33% from deep, all well below average. His eFG% was the worst on the team, excluding garbage time, at a paltry 39.3%.

Taken in isolation, those numbers mean little given Lonnie’s limited playing time. Taken in the context of his G League performance, though, there’s reason for concern. In 791 minutes with Austin, Lonnie’s eFG% was just 47.7%, worse than 14 other players on the team. He shot often and poorly, leading the team with 20.0 field goal attempts per 36 minutes while making just 43.9% of those looks.

The disconnect between what Lonnie actually did last year and what he appears to be capable of is startling. He has the tools to be both an offensive fulcrum and a defensive stalwart. His raw physical measurements, at 6’5” and 205 lbs with a 6’10” wingspan, are just as impressive as his balance, speed and strength, all of which made it clear he belongs on an NBA court, even in his limited appearances in San Antonio.

It’s not just his size and athleticism, though; he can already do almost everything the Spurs expect from a wing. He handles the ball well enough to deal with pressure, looks comfortable in the pick and roll, makes quick reads and delivers timely passes, is a threat off the dribble from anywhere on the floor, and can comfortably guard 1-3, and probably even hold his own against a fair number of small-ball 4s.

His off ball movement and awareness needed work and he struggled to execute the Spurs’ defensive scheme for most of the season, but those are common issues for young players. More concerning was his poor shooting from distance, an issue that already plagues too much of the Spurs’ backcourt.

But even though he shot poorly, it’s worth noting that about a third of his three pointers were unassisted, a number only Patty Mills approached on the big league club last season. It’s reasonable to expect him to shoot better on a diet that consists of more catch and shoot attempts and fewer pull ups.

Watching Lonnie in Summer League, though, didn’t provide much support for the idea that the team is preparing him for a 3 and D role. He dominated the ball and did pretty much whatever he wanted with it, relying heavily on a pull up jumper that looks unguardable. Perhaps his usage, which went up every game he played and finished at a little below 34%, was a result of the team construct and he was just taking what was there.

Looking at how efficiently he scored, it’s hard to argue that there was a better way for the team to use all those possessions.

Here’s a final look at the most efficient offensive players at this year’s #NBASummer Leagues. pic.twitter.com/OgUWkwzmsA

But given the way the Spurs managed his playing time and and that of their 3 rookies, it certainly felt like they wanted Lonnie to get as many reps with the ball in his hands as possible. He only played 2 games with each of the team’s 2019 draft picks, spending the majority of his time on the floor doing a pretty spot on impression of the vet he seems destined to replace.

And therein lies the issue for Lonnie and the Spurs as they approach the season. What Walker needs, if he’s going to continue on this track, is the ball in his hands, playing against NBA defenses with NBA shooters and NBA bigs around him. But that opportunity is going to be hard to find within the team’s current construct.

The Spur most obviously analogous to Lonnie, DeMar DeRozan, is going to play a lot of minutes and use a ton of possessions, and the team is going to score a lot of points when he does. That’s what makes him a star. The Spurs’ offense jumped from 17th in the league in offensive efficiency in 2017-18 to 5th last season, in large part because of DeMar. But their defense went the other direction, from 4th to 20th, and he was a part of that, too.

Long-term, Lonnie could become something like DeMar on offense, though with a little more range and a little less playmaking ability, but should be a plus defender, too. Lining him up beside Dejounte Murray and Derrick White could give the Spurs one of the best perimeter defenses in the league for the next decade. But he’s not there, yet.

Finding minutes for him to grow into that role is critical to the team’s future, but might be harmful to their short term prospects. It may seem obvious at this point that he’ll crack the rotation, but it’s unclear whether Lonnie’s defense and shooting have reached a level where he makes sense as a complementary piece. If he’s not going to have the ball in his hands (and have it a lot), he may not have much more positive impact at this point than even the bottom of the team’s deep well of guards and wings.

Once you account for DeRozan’s minutes in the low-30’s, 25-30 each for Dejounte Murray and Derrick White, and give DeMarre Carroll some time at the 3, there isn’t a whole lot of playing time left for Bryn Forbes, Patty Mills, Marco Belinelli and Lonnie. Even if the team commits to going small, using conservative estimates for how much their best guards play, there are only going to be about 50 minutes available to split between those 4 players.

The answer, hopefully, is that Lonnie gets a consistent 20 minutes, Marco doesn’t play on a nightly basis and Bryn/Patty split the rest. Lonnie may make a ton of mistakes, but even if they aren’t better with him on the floor this year, they will be in the long run.

Summer League basketball moves at a different pace than what he’ll see in October. The offenses will be much more complex and the players running them more skilled and more athletic. It’s hard to tell from four Summer League games if he’s ready to execute at that level. Still, it’s a very good sign that he’s able to help other defenders with their responsibilities.

That knowledge will absolutely translate, as will his understanding of the ball handler’s choices and ability to anticipate the outcome, though it likely won’t end up in a pick 6 nearly as often.

On the other end of the floor, his shot looked good, too. He only made 4 of his 13 threes in Summer League play, which isn’t exactly encouraging, but that’s nowhere near enough attempts to even guess at his actual shooting ability.

He still takes a little too long to load up, at least in part because he brings the ball all the way down to mid-thigh before going into his shooting motion, but he appears to have a pretty solid base and decent balance all the way through.

If he can shoot and defend well enough to stay on the floor, the Spurs will be far better off down the road. DeMar has the ability to opt out next season, and even if he doesn’t, he’ll be an unrestricted free agent in 2 years, when Lonnie will be 22. That might be the perfect time to hand over the keys to the Spurs’ offense.

There’s precedent, obviously, for the Spurs slowly developing a prospect into a high usage offensive force, and there’s no reason to expect them to be any less patient this time. Still, every minute he gets is an investment in the future. When he misses a rotation or gets a little trigger happy, sure, yank him, yell at him, and sit him down. Then when it’s time to call his number again, send him right back into the game.

Lonnie, as much as anyone on the roster, represents the ceiling of the team’s future. If he can reach his full potential, along with continued development from the rest of the Spurs’ young core, they might not just be competitive, they could be contenders. That’s obviously not going to happen in his age 20 season and there’s no guarantee it ever will, but the next step on that path is giving him the opportunity.

Since Lonnie Walker IV might be the Spurs’ future…
Source: Pounding The Rock