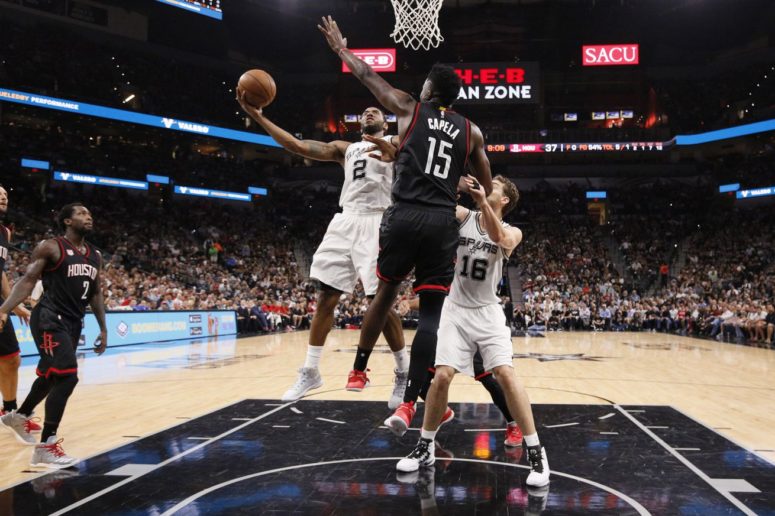 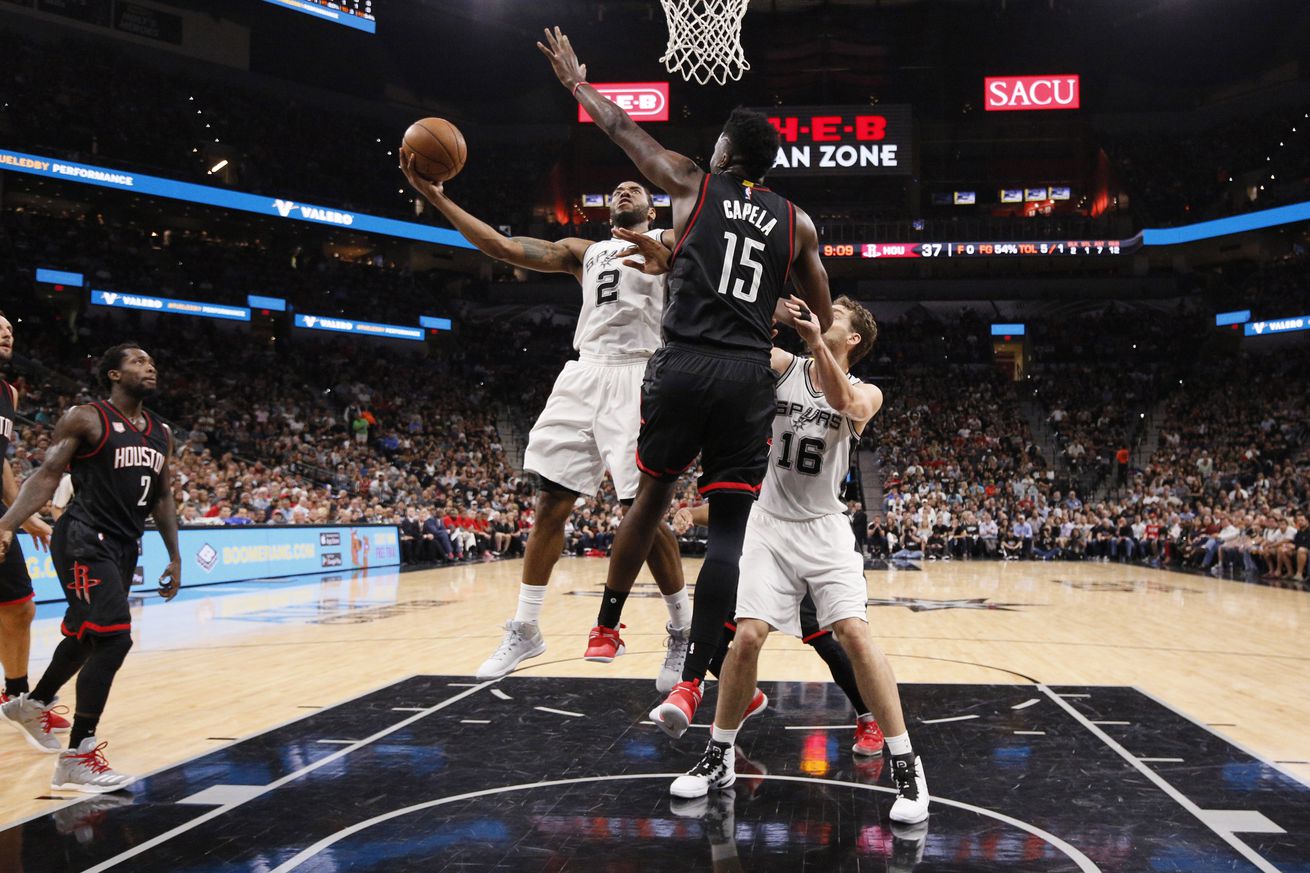 The Spurs found their mojo by playing with intensity as Kawhi Leonard led the team to a resounding win over the Rockets.

The Spurs did what they needed to do, and Kawhi Leonard’s MVP-caliber performance of offensive dominance and shutting down the best player on the Rockets was what they needed to even the series. The whole team played with intensity and purpose, following the lead of their star player. But the big concern for the Spurs for the rest of the series is going to be the health of Tony Parker, who left the game in the fourth quarter with a possible knee injury. It will be interesting to see what Pop is going to do to keep his team in games without his second best player. My guess is that we’re going to see a lot more Jonathon Simmons and Manu Ginobili, with spot minutes from Dejounte Murray.

San Antonio’s most effective lineup was a no point guard lineup with Kawhi Leonard as the main ball handler, but he probably can’t do that for an entire game, but that might be the closer for the remaining games in the series.

The Spurs started the game with a lot more intensity as Kawhi Leonard hit shots to build an early lead. LaMarcus Aldridge played much better early as he hit a few shots and gathered crucial rebounds. The Rockets came back but the Spurs had a 9-0 surge in the middle of the quarter as they surged from a 16-16 tie to lead 25-16. But Ryan Anderson was able to get rebounds for the Red and Gold and hit shots when he was open. Eric Gordon brought the Rockets back but a late LaMarcus layup put the Spurs up by three. The Spurs led 33-30 after a quarter.

The Houston defensive intensity increased as the second quarter began, and they continued to move the ball and make it hard for the home team to curtail their offense. But Kawhi took it upon himself to carry the Spurs on offense and he took the ball into traffic and scored at will. But Eric Gordon and the Rockets continued their hot shooting and kept pace. The Spurs led 50-46 halfway through the second. The Spurs continued to put on the pressure and extended the lead to double digits with a pair of free throws from Kawhi with 3 minutes left. Parker extended the lead with a triple from the baseline, and D’Antoni needed a time out.

The Spurs continued to play hard, but Houston also hit their shots with Ryan Anderson doing most of the damage. The Spurs led 65-55 at the half.

Harden got a cheap foul early in the third, taking advantage of Parker reaching in to get three free throws. Ryan hit another triple and after a steal and a coast to coast layup from Clint Capela, Gregg Popovich had to call a timeout with his team up by only six. The Spurs turned up the offense, but Harden hit a three and after a Capela layup the Rockets were only down by 5. After a Parker triple, the Spurs led by 8.

Harden missed a shot, and he got locked up with LaMarcus going for the rebound and drew a foul. He got hit hard in the face with an elbow, but it was clearly unintentional. Nevertheless, it led to a lot of barking from Harden and the Rockets. Both teams got a little chippy, but finally Houston started to miss some shots and the teams kept pace. But with 2:49 left, Harden drew a questionable foul on Patty Mills, hitting 2 of 3 free throws to cut the deficit to 4 points. Eric Gordon canned a triple on an assist from Harden, but a pair of buckets from Jonathon Simmons put the Spurs up 88-83 after three quarters.

The Spurs got to the loose balls early in the fourth, leading to a gutsy Manu Ginobili putback. Simmons continued to cook and the Spurs were back up by double digits a minute into the fourth. After Manu hit a pair of free throws and a Pau Gasol dunk, the Spurs were up 14 with 10 minutes left.

Then the unthinkable happened. On a drive to the basket, Tony Parker landed awkwardly on his left leg and laid on the floor, pointing towards his knee. The Spurs avoided a Houston 5 on 4 by fouling Patrick Beverly, but Tony had to be carried to the locker room by Dewayne Dedmon and Dejounte Murray.

There was still a game to play, and Kawhi Leonard came in to replace Tony. Patty Mills used a nifty move to lose Beverly to score. The Spurs went to a no point guard lineup with Kawhi as the main ball handler, and continued to extend the lead as he could not be defended. The Spurs fought for every loose ball and they led 111-88 with just under 5 minutes left. D’Antoni waved the white flag with about 3 minutes left and the lineup of Murray, Simmons, Dewayne Dedmon, Kyle Anderson and Davis Bertans finished out the game for the Silver and Black.

This is a tune by Mel Tillis that’s been performed by a ton of artists. It’s a nice country song about love gone wrong. Like most country songs are. This version is sung by the Long Ryders, who probably should have been a lot more famous than they were.

The Spurs play game 3 in Houston on Friday night at 8:30 pm. The Spurs need a win in Houston to regain home court advantage. Without Tony Parker, it just became a lot more challenging. If you’re in Austin, consider watching the game in my back yard in South Austin.