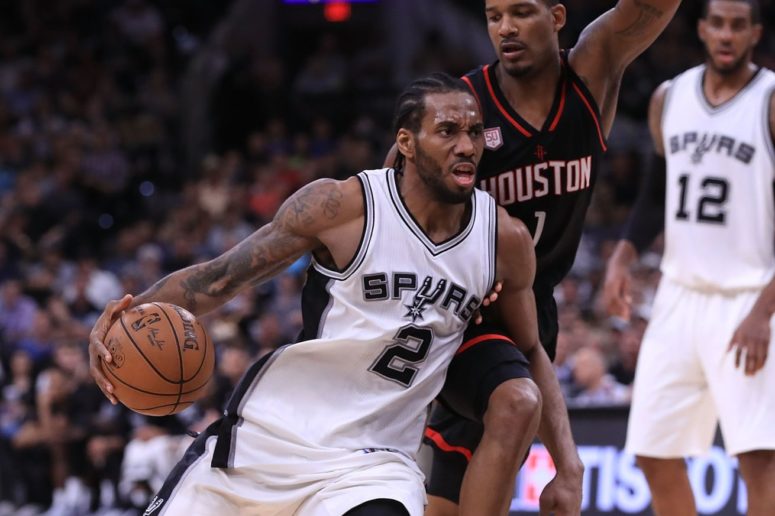 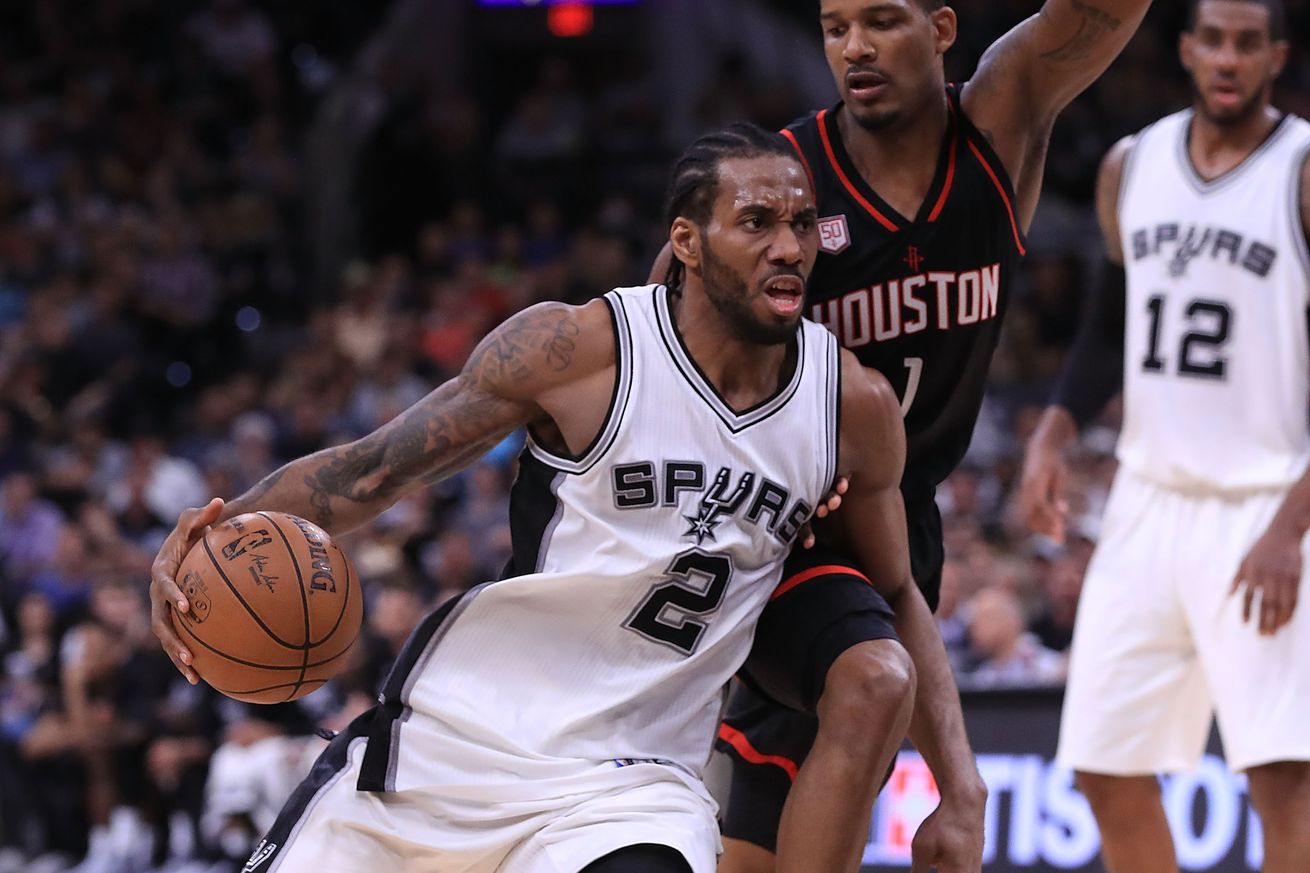 In what was virtually a much a must-win situation for San Antonio, the Spurs put together a great all-around game to even up the series.

After getting trounced by Houston in Game 1, the Spurs punched back on Wednesday night behind a superlative night of ball from Kawhi Leonard. The MVP candidate basically put together a perfect game, shooting 81.3% from the field, 75% from deep and was flawless from the line(5/5). He grabbed seven boards, dished a career postseason-high eight assists, notched three steals and blocked a shot. He finished a game-high plus-24 in 38 minutes.

He was also tasked with checking James Harden on the other end and was even better than one might expect. While the Spurs threw multiple defenders at Harden, Leonard was on him from the tip and Harden finished 3-for-17 from the field. After the game Harden was asked what challenges Kawhi presents to him and he brushed the question off and simply responded with, “I missed layups.”

There is truth to that, in that he did miss layups, but it’s not like he missed bunnies. He’s obviously a phenomenal player and he has the skills to make the layups he missed, but the seven layups he missed were for the most part very tough looks, and two were straight up rejected.

The Spurs also limited Houston to 34 attempts from deep, down from 50 in game 1. OKC stayed competitive, in games 2-5 at least, in the first round by doing the same — the Rockets averaged 33.8 attempts from three in their five game series. The Rockets made half as many threes in game 2 as they did in game 1 (11 to 22), hitting 32% of their triples instead of a deadly 44%.

It helped that the Spurs’ offense clicked from the very beginning, limiting Houston’s transition game and allowing San Antonio to set up their half-court defense.

While the game seemed fast, San Antonio did push the ball up the court quickly in their possessions, they took their time on offense, making smart passes to get better looks, often taking a shot with the shot clock in single digits which resulted in a markedly slower pace. The game clocked in at a pace of 90 possessions per 48 minutes (pp/48), down from 105 pp/48 in game 1. Even excluding the fourth quarter, the pace was just 93 pp/48. For what it’s worth, the Spurs’ regular season pace was 96 pp/48.

That’s something to watch going forward as the Spurs’ offensive efficiency gives them an advantage in a game with less possessions against a Houston team believing in a philosophy of volume threes over everything.

After starting David Lee in game 1 Gregg Popovich inserted Pau Gasol back into the starting lineup, the veteran Spaniard’s first start since January 17th. Gasol scored just six points on 11 shots, but he was huge on the boards for SA, grabbing 13 total and six of the offensive flavor. It’s not in the box score but he also tapped out quite a few more loose balls for SA and the team scored 19 second-chance points. While Pau has his defensive deficiencies he was good for SA, or perhaps it was as much that David Lee only logged 11 minutes in the game. Gasol even tallied four blocks in the game.

The Spurs also spent a chunk of game playing small ball and it worked for the Silver and Black. Jonathon Simmons saw some time at the four, which might have been a first this season, and he was solid in his 20 minutes, scoring 14 points on 5-of-9 shooting. I still have doubts that playing small is a sustainable solution to Houston’s puzzle but what was seen in game 2 is a very positive sign.

While it was a great win for San Antonio, it came at what appears to be a hefty price and presents a problem with playing small going forward. With 8:52 left to play in the fourth quarter Tony Parker suffered what looked like a terrible non-contact knee injury on a jumper.

Tony tried to limp off the court with help but after a couple of one-legged hops he had to be carried into the locker room with the crowd chanting “Tony! Tony! Tony!”. It was a sad sight on the night that Parker created a one-man club and also joined an ultra-exclusive one — he scored his 4000th point in his postseason career, the first European to do so, and joined Michael Jordan, Kobe Bryant and LeBron James as the only players in NBA history to have 4000 points and 1000 assists in the postseason. h/t Jordan Howenstine

After the game the soon-to-be 35-year old Parker’s teammates didn’t seem optimistic about the injury. Patty Mills said, “I gave him a hug. That’s all that needs to be said.” Manu Ginobili added, “We’re not going to see him anytime soon. That is a tough blow.”

It’s a tough blow to say the least as Parker has been the second best player on the team in the playoffs, enjoying a resurgence after a regular season that had most people doubting that he had much left to give.

Tony averaged 16 points on 53% shooting in eight games, had the second-best plus/minus on the team and was the Spurs’ veteran, battle-tested leader. The Spurs will need the rest of the guards at their best if they’re to advance to the WCF, probably including a rookie in Dejounte Murray.

At least the team got plenty of experience playing without Tony in the regular season, where he missed 19 games. Of course, Tony only scored 15 or more points 16 times in his 63 games. He did it in six of eight in the postseason. That’s going to be a little harder to make up for.

The number on the white board in the Spurs locker room now reads 11 but at least splitting the games in Houston over the weekend is what’s really important now.