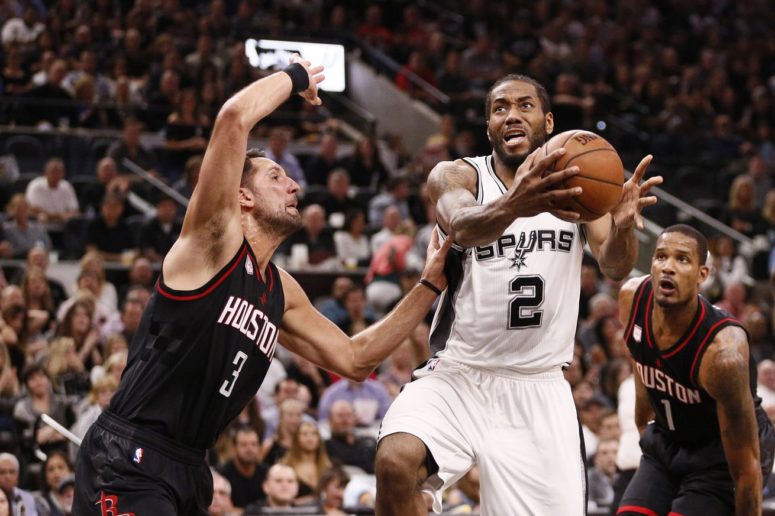 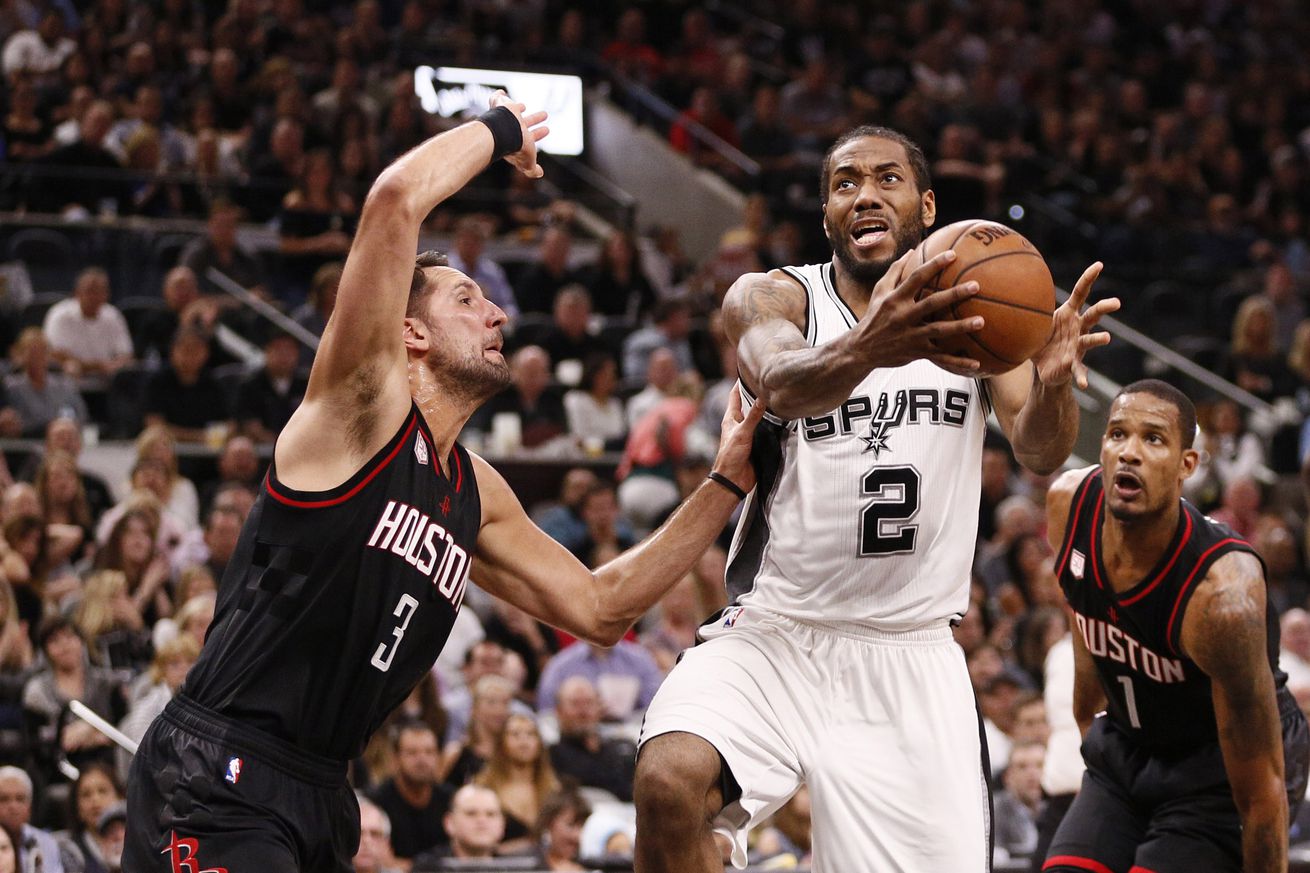 Danny Green and Manu Ginobili made key plays late as the Spurs wrung out a win in overtime with Kawhi Leonard sitting on the bench with an ankle injury.

Kawhi Leonard had to leave the game early with an ankle injury and it was looking like a very tough game for the Spurs to win as the Rockets were playing with great poise and hit their shots. But the Silver and Black were able to keep pace late in the game by playing tough defense, even when they went cold from the field and were able to force overtime. They shut down the Rockets in overtime and Danny Green and Manu Ginobili made the plays late that sealed the game for the Spurs.

Danny Green started the scoring for the Spurs with a Tarheel Triple, but the Rockets quickly answered with a three from Patrick Beverley. Patty Mills started the game at point for the Spurs and was hitting his shots, but so were the Rockets. When Spurs bigs switched on the quick Rockets, they got open shots and hit most of them. The Spurs built a little bit of a lead midway through the quarter, but the Spurs continued to lose ground to the Rockets who were scoring most of their points beyond the arc. A Lou Williams floater gave the Rox their first lead of the game at 27-26 with just over two minutes left. Jonathon Simmons answered with a quick pair of baskets to regain the lead for the Silver and Black. Simmons drew a foul on Harden to keep the Rockets from regaining the lead, and the Spurs led 32-29 after the first 12 minutes.

The Rockets started the second quarter with both Ryan Anderson and Clint Capela on the floor and the Spurs with Simmons at the point. It looked pretty good for the Spurs but missed shots, including a missed layup by Kawhi allowed the Rockets to get back in and tie up the game at 35 with a little more than 9 minutes left. The Spurs finally had their first turnover shortly afterward and the Rockets took a 42-41 lead with a Ryan Anderson pullup three. Harden, who had been saddled with foul trouble, came back into the game and began to bring hit team back with drives to the basket and they were able to regain the lead. Manu Ginobili brought the grandpa juice with a drive and dunk to bring the Spurs back to within a point. The score was 60-58 Rockets at the half.

The Spurs started the third looking a little discombobulated, taking early shots and letting the Rockets get up three point attempts. Luckily for the good guys, the Rockets were a little cold, but they still scored the first five points of the third to surge to a 65-58 lead, their biggest of the game. Kawhi did his best to bring the Spurs back with a block on Capela and a drive to the basket. But Eric Gordon, Pat Beverley and Harden kept up the pressure and pushed the lead to nine. But the Spurs started to tighten up the defense and force turnovers to keep the score in range despite the continued hot shooting from the Rockets. Halfway through the third quarter, the Rockets led 75-71. The Spurs persevered and cut the lead to just a point, but a bad call on a Lee block of a Harden shot gave the ball back to the Rockets, who took advantage with a Beverley three. But Danny Green hit a three point shot with less than a second left to give the Spurs their first lead of the second half and the Spurs led 86-85 after three quarters.

Manu Ginobili hit a triple to start the final quarter to put the Spurs up by four. With both Kawhi and Harden sitting, the benches for both team were in and the Spurs needed to take advantage. The Spurs size started to take effect as they got to loose balls and drew fouls on the Rockets. But with seven minutes left, the Spurs led by only two, 91-89. Harden, having just returned to the game, put the Rockets ahead with a free throw and a floater in the lane. The Spurs went cold from the field and Lou Williams put the Rockets up by three with five minutes left in the game. The Spurs were missing everything, but they were still in the game. Finally, LaMarcus Aldridge scored on a putback of a Manu miss to cut the lead to one. But Harden drove the length of the court to increase the Houston lead back to three. Eric Gordon and Patty Mills swapped threes, and after a Houston turnover, Aldridge tied it up at 99 with just over a minute left. But the Spurs were unable to gain the lead as they missed shots and Harden put the Rockets up with a pair of free throws. Manu tied it up with a drive to the basket and the Rockets called timeout with 34 seconds left.

Simmons made the defensive play of the game as he stepped up on defense and took a charge from Harden to get the ball back for the Silver and Black. The Spurs had the ball with 11 seconds with the score tied at 101. But the Spurs messed up the play out of the timeout and Patty Mills’ three-point shot was released too late to count.

The offense was terrible for both teams to start overtime as every shot seemed to miss and there was no organization. But the Spurs were working hard, with Kawhi out, they were struggling, but they would not let the Rockets score. The Spurs seemed to score the first points of the overtime, but it was waved off for offensive goaltending. Finally, with 2 minutes left in OT, Beverley scored the first points of the overtime with a triple for the Rockets. Simmons stole the ball and hit a pair of free throws to bring the score to within one. Ginobili stole the ball and Green hit a three to put the Spurs up. Ryan Anderson answered for the Rox, but Danny Green drove to the basket and got fouled by Harden for an and-one to put the Spur up 109-107 with 30 seconds left in OT. Eric Gordon missed on a deep three and Danny got the rebound and was fouled. After Danny hit 1 of 2, the Spurs were up 110-107 with 15 seconds left. Still plenty of time for the Rox.

Once again, the Spurs defense stepped up, and Patty Mills tied up Eric Gordon. The Rockets controlled the tip, but they could not get organized, and Manu Ginobili blocked James Harden’s shot as the clock ran out, Spurs won 110-107.

Will this series go the distance?

Game 6 is Thursday at 7 pm in Houston. It’s going to be an elimination game, and the team that does a better job handling the pressure is the team that’s going to win it. Hopefully the Spurs can close out the Rockets, but if they don’t, then there will be a Game 7 at 2:30 Sunday afternoon on ABC for the opportunity to play the Warriors.