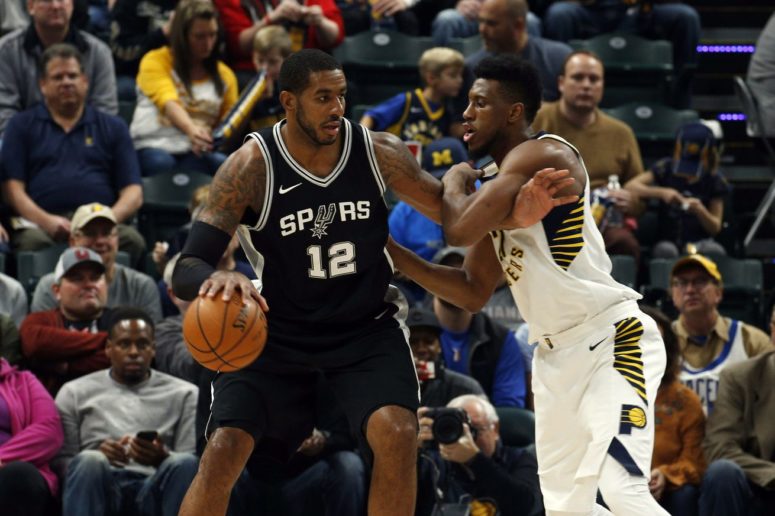 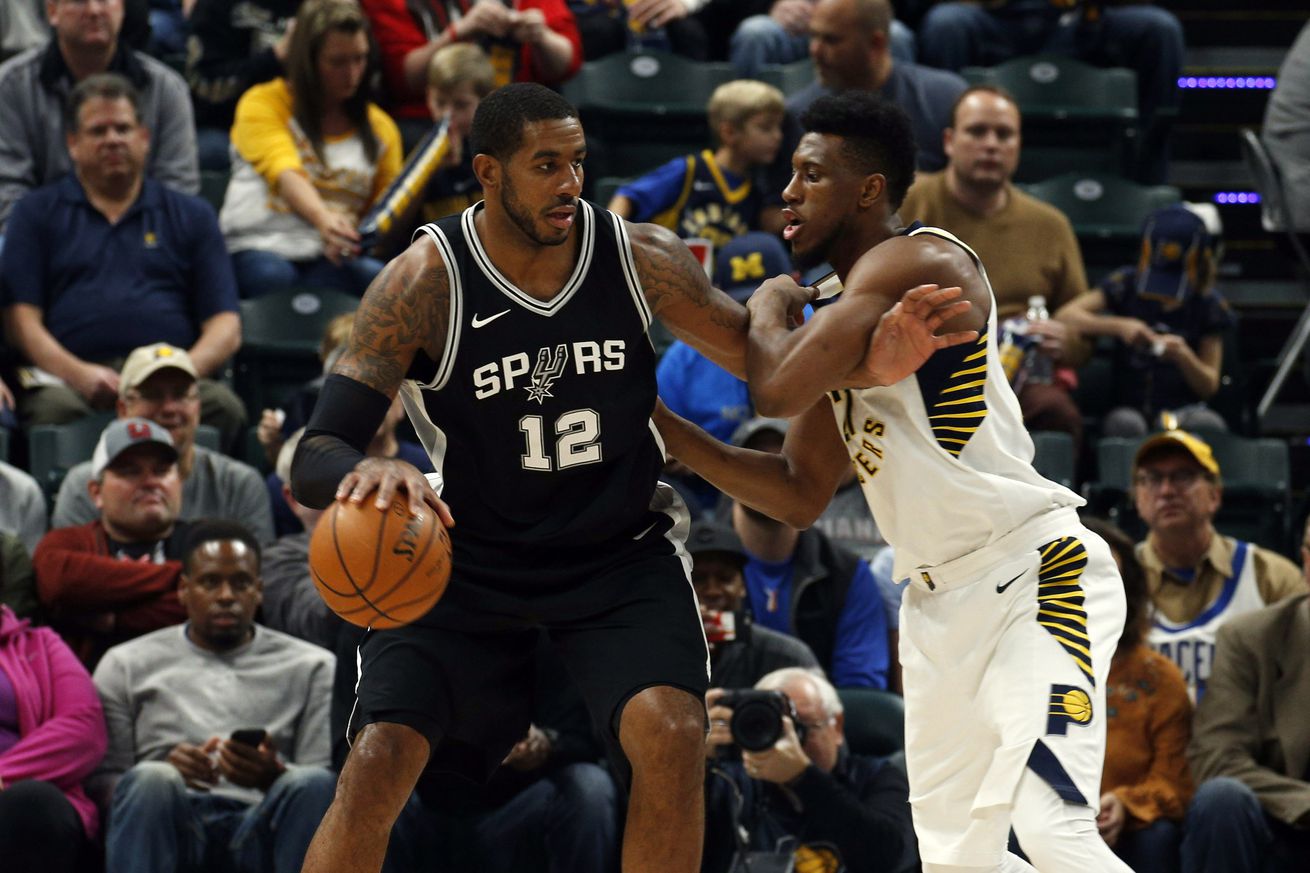 An uneven outing ends in disappointment as the Spurs lose their second straight.

After suffering their first loss of the season at Orlando, the Spurs went to Indiana, where they have won 8 of their last 9. Today also marks the 15th anniversary of the legend Emmanuel/Manu Ginobili making his NBA debut, and watching him has only gotten sweeter since 2002, as he has aged like a fine Argentinian wine.

LaMarcus Aldridge opened up the scoring for the visitors, before Thaddeus Young and Yankee Noodle Danny traded threes. Indiana then went on a 9-0 run, with the Spurs looking like they brought the same defense from the Orlando game. The run forced Pop to call time and switch out the entire starting lineup minus Aldridge, who stopped the 11-0 run with a pick-and-pop from the elbow. Victor Oladipo picked up two quick fouls, a positive for SA, which brought former Spur Cory Joseph into the game. Once the Spurs’ defense settled down, they were able to slowly claw back with the Pacers in foul trouble. After being down 21-12, the Spurs were able to end the quarter only down 26-24; although if not for some bad shots by Patty and a double dribble by Danny Green, they could have taken a lead into the second.

Dejounte Murray opened the Spurs’ scoring with a creative drive and scoop for his first points of the game. Pau had a chance to tie the game at 31 with an and-1. He missed the freebie, but hit a 3 the next time down to tie the game at 33. After trading turnovers and missed shots, LA got his 11th point by completing the and-1 to tie up the game at 36 with just under 6 minutes in the half. Bogdanovic got his third transition 3 to give the Pacers back a 5 point lead before Pop called time again. It didn’t help, as the Pacers built up an 11-2 run to take a 49-40 lead before Brandon Paul hit his second 3, his only points of the game. Indiana built up their 53-49 halftime lead thanks to 52% shooting, including being 7-11 from deep. The Spurs, meanwhile, shot only 39% from the field, leading to the deficit. Aldridge had 16 to lead all scorers at the half, while Bogdanovic led Indiana with 13.

Kyle Anderson seemed to be everywhere to begin the second half, with a steal, assist, and a put-back off a Danny Green missed layup to bring the Spurs within 5. While the defense tightened in the 3rd, bringing Indiana’s shooting down to 46% for the game, the continued poor shooting by the Spurs (35%) meant that they weren’t able to take advantage of 6 straight missed shots by the Pacers. San Antonio forced 7 turnovers in the quarter, but made only 1-9 from deep, and had 4 giveaways of their own. Aldridge only had 2 points in the quarter, but still led the Spurs who went into the 4th down 68-64.

Patty opened the 4th with a corner 3, and Rudy Gay hit 2 freebies to give the good guys the first lead since 5-3. A 7-0 run by the Spurs led to Indiana calling time with San Antonio up 73-68. Aldridge took advantage of his size on the put-back and-1 for his 23rd point, as San Antonio looked to be pulling away with the game, up 82-73 with 6:35 left. After 5 straight by the Pacers, LA had another and-1 opportunity, but missed the freebie to keep the Spurs’ lead at 84-78. The Spurs just kept feeding LaMarcus down the stretch, but Victor Oladipo also caught fire in the 4th, with a deep 3 that was part of a 7-0 run by Indiana to give the Pacers a two point lead with 3:27 left. Domantas Sabonis was 9-9 with 22 points for the odd stat of the game. Patty hit a beautiful runner off the glass to tie the game at 89, then Oladipo copied him and got the and-1, part of his 14 in the quarter, to take the 3 point lead. 5 straight by Verde gave the Spurs the 94-92 lead off a corner 3 and a back-door reverse lay-in as part of a very busy 4th quarter. Oladipo hit a tough 3 over LA to give Indiana the 95-94 lead with 10.3 seconds left. Aldridge missed the tough elbow 2 and then fouled Cory Joseph, who hit 2 free throws to give the Pacers the 97-94 lead with 3.4 remaining. Patty airballed the corner 3 out of the time-out to give the Pacers the hard-fought victory. Aldridge had 26 to lead all scorers, but the Spurs have now lost 2 straight to bring them to 4-2.

The Spurs end their four game roadtrip in Boston Monday at 6:30 in another tough matchup.