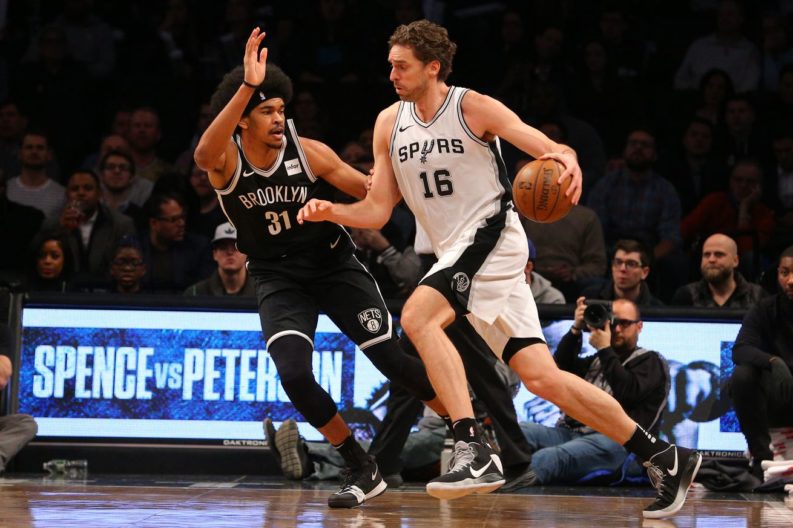 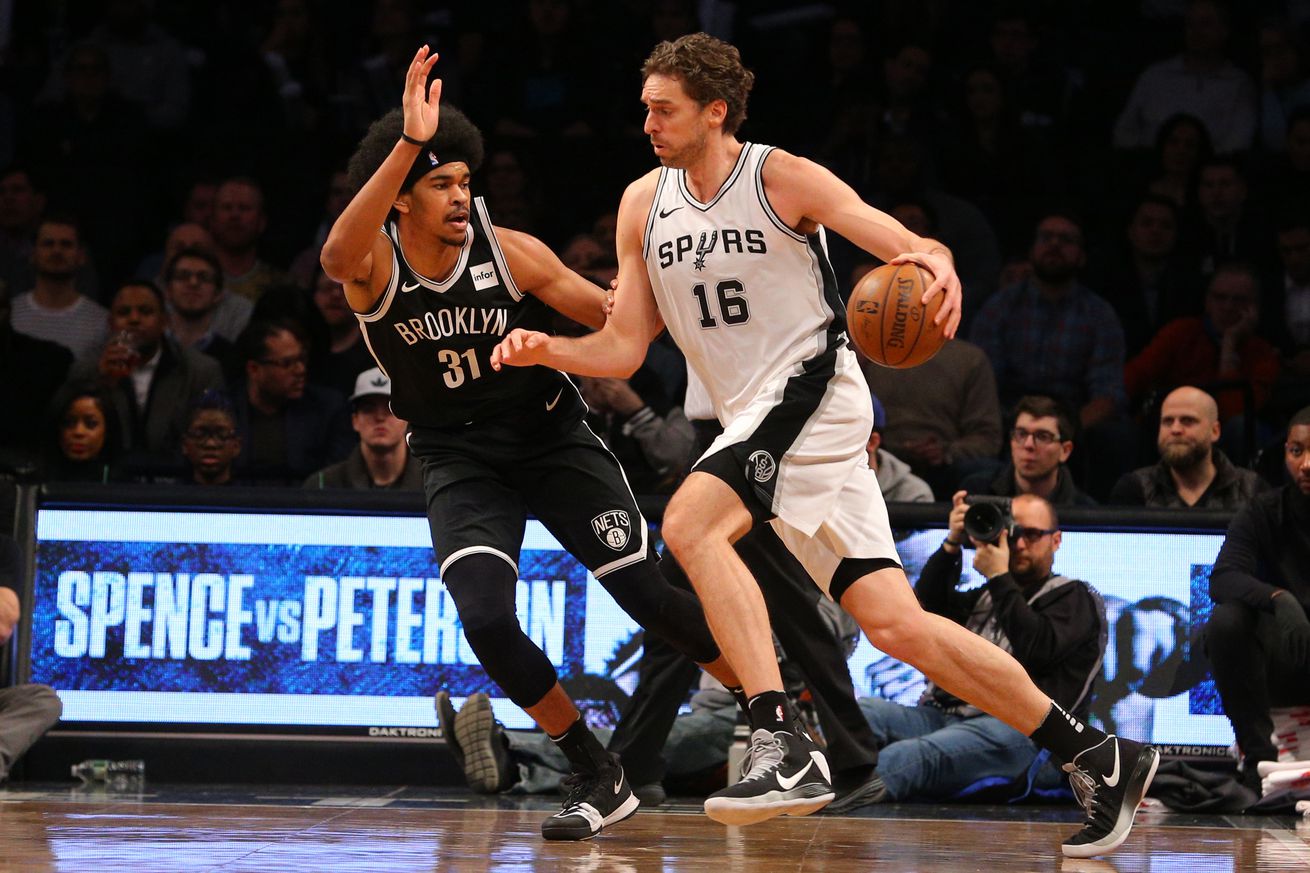 Spurs build a big lead in the third and hold on for the win.

On a night when the Spurs learned that Kawhi Leonard was out indefinitely, the Silver and Black turned in a workmanlike effort to overcome the Brooklyn Nets. Powered by the inside dominance of LaMarcus Aldridge’s 34 points and Patty Mills’s 7 of 8 from three-point land, on 8 attempts and LaMarcus the Spurs built a big lead in the third quarter and held on for the win.

The Nets started off conceding mid-range shots to Pau Gasol, who obliged and hit a couple of them. DeMarre Carroll hit a pair of three-point shots to give the Nets a narrow lead early. The energy of the Nets and the Spurs lackadaisical play led to an 11-2 Net run for a 8 point lead for the Brooklynites early. LaMarcus Aldridge in the paint and Patty Mills on the perimeter led the Spurs on a comeback to take the lead at 22-21. The Spurs defense turned up the heat late, and led 31-26 after one quarter.

The Spurs began the second quarter with another Mills triple but then went subzero, and the Nets got hot to tie the game at 35. The game kind of got boring at this point as the Spurs offense began to look like a inept thing performing ineptly.* But Patty Mills broke the drought with a three point shot plus a foul to put the Spurs up by three. LaMarcus Aldridge used his size and strength to dominate Jarrett Allen and the Spurs finished the quarter strong to lead 51-46 at the half.

After a slow start, the Spurs began to build a lead on their inside superiority with LaMarcus. That opened up the perimeter, and Danny Green and Gasol hit triples to open up the lead to 67-50 halfway through the quarter. The rest of the quarter was more helter-skelter, but the Spurs nearly kept pace with Aldridge’s continued interior domination to lead 76-64 after three.

The Spur started the fourth with a lot of energy, but missed shots and turnovers kept them from extending the lead. Joe Harris and Allen Crabbe hit triples as Brooklyn cut into the lead, as it was just four halfway through the quarter. The Spur extended the lead to 8 points, but Spencer Dinwiddie, who had been having a bad night from the floor, brought them back to 4 with a basket and a pair of free throws. After a pair of free throws from Patty, Dinwiddie came back with an and-one to cut the lead to three with just over two minutes left. LaMarcus once again went to the basket and got a basket plus the harm to extend the lead to six at 53 seconds left. Dejounte Murray helped to ice the game with a rebound off a missed free throw. It still wasn’t over, as the Spurs muffed the inbounds play in the final minute to let the Nets cut the lead to 97-94 with 19 seconds left. Danny Green hit 3 of 4 free throws to ice the game as the Spur won 100-95.

With all of the injuries, it kind of feels like there’s been some kind of voodoo on the Spurs this year.

The Spurs are now 30-16, and they’re in third place in the Western Conference. The Spurs go north of the border on Friday night at 6:00 pm to meet the Toronto Raptors. Toronto is the second best team in the East this year and will be a tough test for the short-handed Spurs on the road.