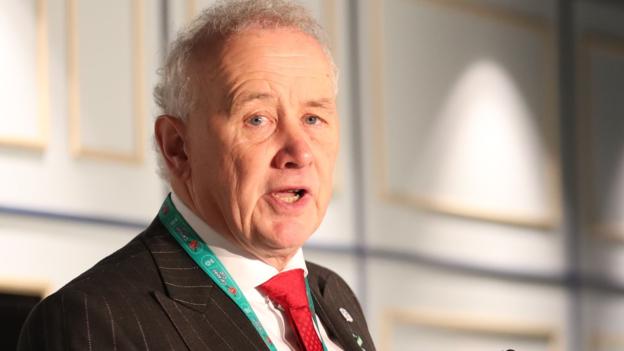 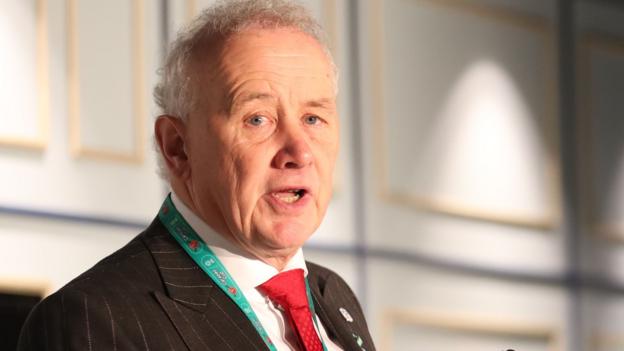 English Football League chairman Rick Parry has said the current season needs to be concluded before 31 July and that clubs face a “£200m hole” by September.

Parry said it was “difficult to answer” how many might go out of business.

He was giving evidence to the Digital, Culture, Media and Sport committee about the impact of coronavirus.

Parry covered a wide range of subjects, including:

“Our end date realistically is 31 July because of the situation with contracts,” said Parry. “We can’t go beyond July.

“Players and staff have been furloughed and to expect clubs to bring them back in now, to forgo the furlough, only to then find in a month they can’t play would be a complete mess.

“We need within days to be taking decisions.”

He added: “We have a great deal of uncertainty around next season and the undetermined matter of when we’ll be able to return with crowds, which for the EFL is absolutely critical. We’re much more dependent upon the revenue and atmosphere generated by crowds than the Premier League.”

Parry, who was giving evidence alongside England and Wales Cricket Board chief executive Tom Harrison and Rugby Football Union CEO Bill Sweeney, said he still expected three clubs to be promoted from the Championship to Premier League.

He added that it could get “very messy” if the threat of relegation from the top flight was removed – as has been reported.

“There would be a degree of outrage from a number of clubs in the Championship and it would be a breach of the tripartite agreement,” Parry continued.

Finishing the season behind closed doors would primarily be about “sporting integrity” rather than generating revenue for clubs, said Parry.

“If we were starting behind closed doors it would be finely balanced economically,” he explained. “It’s almost neutral but for many clubs it would actually cost them to play.

“We stand to lose an element of broadcast revenue if we’re unable to complete the season, but given the broadcast contract is nowhere near that of the Premier League it’s a relatively small contribution.”

Parry said he supported the Professional Footballers’ Association’s appointment of financial services firm Deloitte to look at club accounts and assesses if there was a genuine need for wages to be deferred.

“We’re having an open-book policy. We’re absolutely on board with the Deloitte process.”

Player contracts in the EFL

Explaining the situation around player contracts, Parry said the “landscape going forwards has got to change”.

“We have 1,400 players coming out of contract at the end of June,” he said. “That is a train coming down the tunnel very quickly.

“They are going to be extremely concerned about their futures.”

Parry said he “completely agreed” that a rescue package would now be needed to help support EFL clubs.

“The Premier League has said if they’re allowed to play then they will be in a position to talk to us about support for the lower leagues,” he added.

“We await that day – discussions to date, I think it’s fair to say, have been limited.”

Parry also said they could not just rely on going from “one bailout to another bailout”, suggesting a “complete reset” was now needed in terms of the redistribution of revenue within the game.

“Parachute payments are an evil that needs to be eradicated,” he said.

“We have six clubs in the Championship receiving parachute payments giving them an average of £40m per club. The other 18 clubs get £4.5m each, so they’re then struggling to keep up.

He added: “We need to know where we’re heading in two and three years. We need hope, we need a plan and we need some clarity on the longer-term future.”