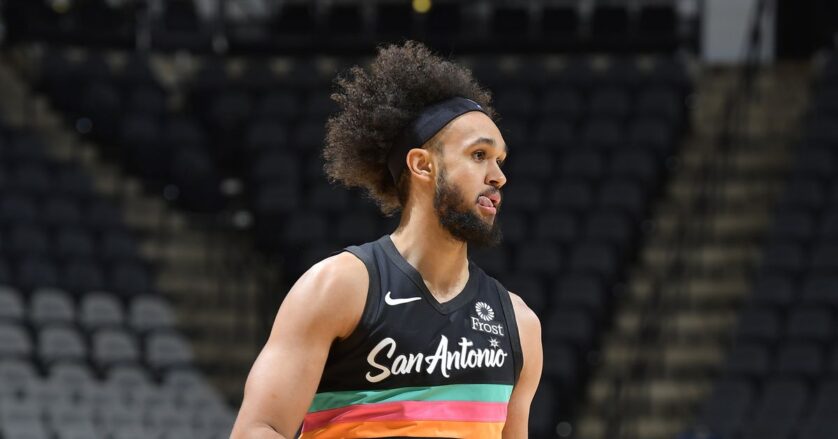 2021 giveth, 2021 taketh away. After making his much anticipated season debut in the Spurs’ New Years Day game against the Los Angeles Lakers following offseason toe surgery, Derrick White missed the next game against the Jazz with what was initially called a “stubbed” toe on the same foot. Turns out, it’s worse.

The Spurs are reporting that White has suffered a broken toe on the same foot that was operated on during the second quarter of the Lakers game, although the two injuries are unrelated:

The San Antonio Spurs today announced that Derrick White has suffered a non-displaced fracture of the proximal phalanx of his left second toe. The injury occurred after White fell at the 3:33 mark in the second quarter of the Spurs-Lakers game on Jan. 1. The Spurs medical staff and Dr. Martin O’Malley, who performed surgery on White’s left foot in August 2020, have confirmed this fracture is a new injury.

A timeline has not been provided for his return, and it is unclear (although unlikely) if he traveled with the team on their five-game road trip that begins tomorrow against the Clippers. (It’s safe to assume he would have if there was any possibility he could play during the trip, considering strict COVID safety protocols, but the odds of him returning in the next 8 days are slim.)

White played 23 minutes in his lone game this season, scoring nine points with two blocks, a rebound and assist. He recently signed a 4-year, $73 million contract extension that will kick in next season. In the meantime, below is the closest thing we’ll have to DW highlights for a while. (You can also see the play where he reportedly injured his toe beginning at the 1:09 mark.) Get well soon, Derrick!