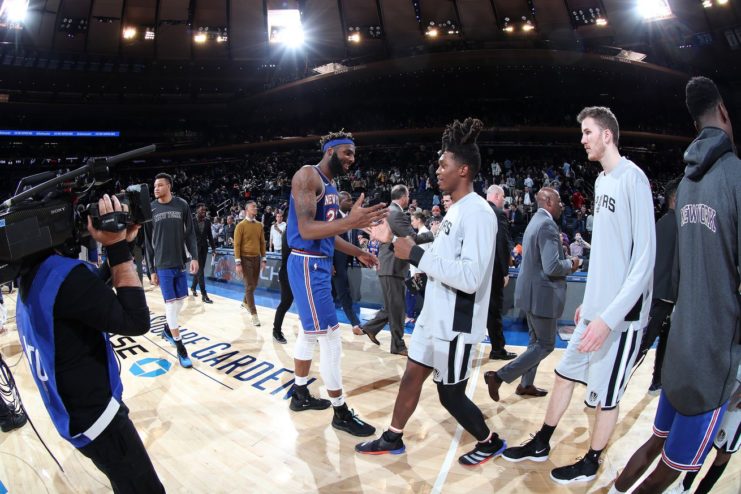 A win was necessary if only to keep a thirty-year streak alive.

Saturday’s win against the Knicks may have been significant considering it stopped the Spurs’ longest losing streak under Gregg Popovich, but it also had some significant moments of another type, and it starts with Bryn Forbes. His 109th start for the Spurs to be exact: the third most by an undrafted Silver & Black player, pushing him ahead of Fabricio Oberto.

Bryn Forbes has now started 109 games for the Spurs, passing Fabricio Oberto’s 108 for third amongst undrafted players in franchise history.

Only two with more in Spurs history both have their jerseys in the rafters – Bruce Bowen and Avery Johnson.

That’s more than 400 from catching up to The Little General Avery Johnson at second, but it’s a significant achievement for another undersized, overlooked guard.

Most games started by undrafted players in Spurs history:

Unfortunately, Forbes start was his sole highlight for the evening as he went scoreless against the Knicks, racking up five fouls in his twenty minutes on the floor.

On the other hand, his counterpart Patty Mills also marked up another notch in the Spurs record books.

Patty Mills has now has 15 games with 5+ three-pointers for the Spurs, matching Sean Elliott for 4th in San Antonio history.

Can you name the three Spurs players with more than fifteen games with 5 or more three-pointers?

Perhaps the most significant statistic of the night, and appropriately pointed out after the game.

Spurs are the only team in the NBA who hasn’t had a 9-game losing streak in the last 30 years.

The only team to avoid a nine-game losing streak: that’s as impressive as their consecutive playoff appearances, and probably more related than first appearances might imply.

On that road trip, the Spurs were limited to one win. Hopefully, coming home for the holidays will have an impact. So cheer the Spurs on tonight as they host LeBron, LeBrow, and LeLakers as they kick off a Thanksgiving week home stand.