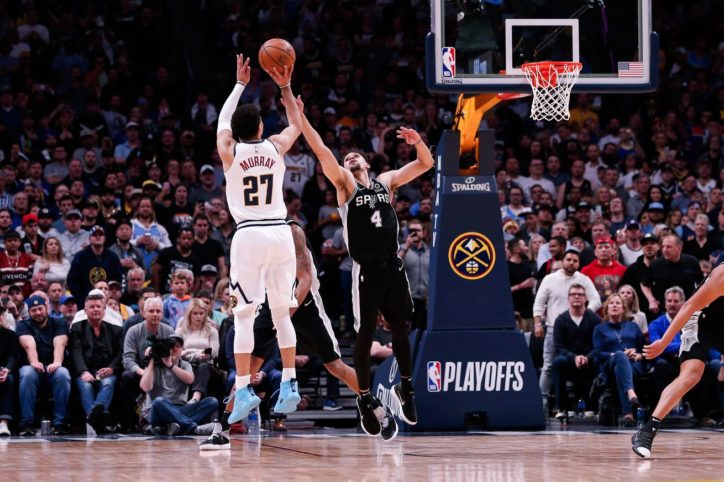 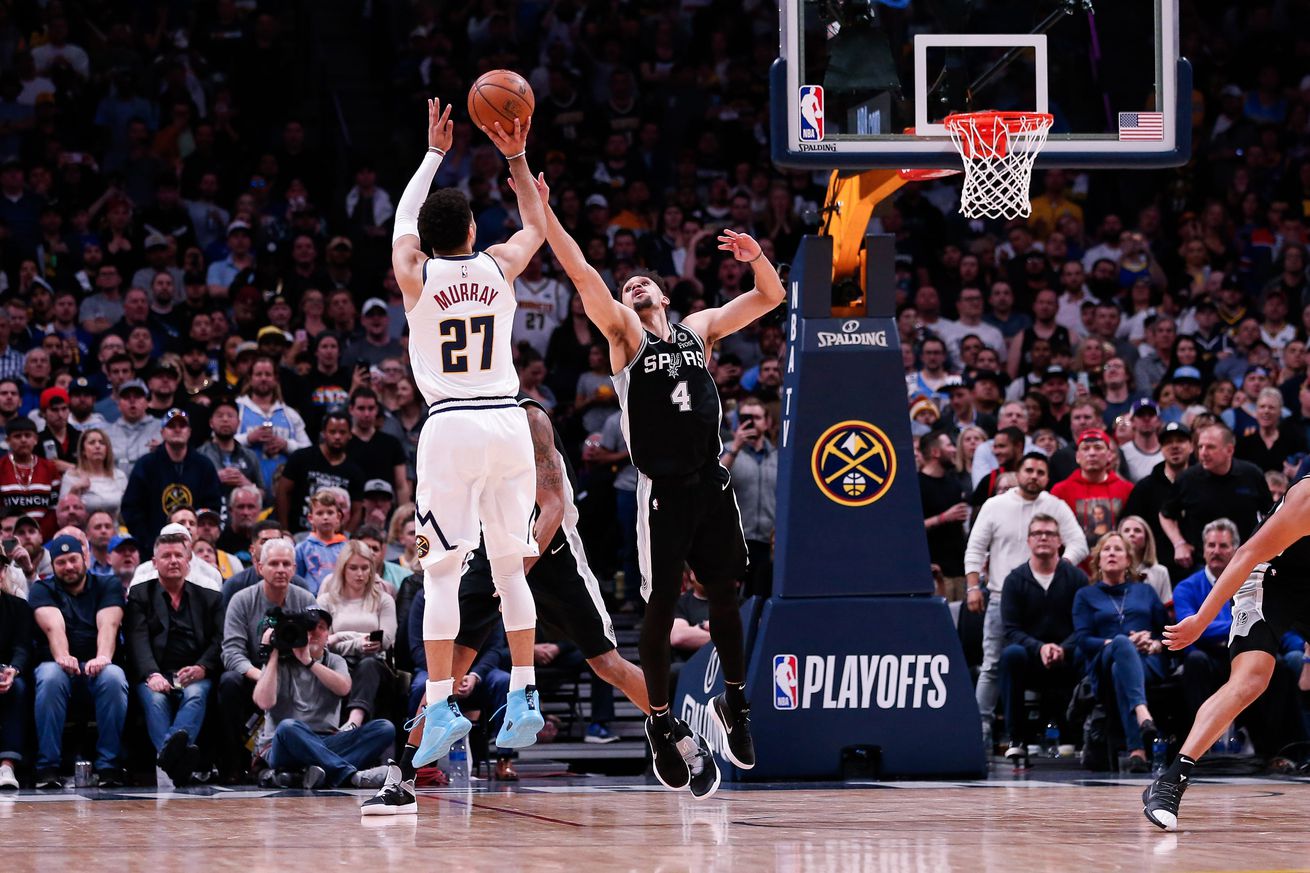 The Spurs have been surprisingly adept at defending the Nuggets. Can they keep it up?

Believe it or not, the Spurs’ defense is working. Despite struggling all season long to execute on that end of the floor, the Spurs have had a profound impact on an elite offense playing at home.

The numbers are astonishing for a team that finished the regular season with the 20th ranked defense and gave up an eye-watering 114.3 points per 100 possessions on the road.

So far, despite playing in Denver against the 7th best offense in the league, the Spurs are outperforming their season average by a wide margin. They’ve held the Nuggets to just 109.9 point per 100, almost 6 fewer points than the Nuggets typically score in the Pepsi Center.

Their success has been a combination of great scheming, solid execution and a little luck.

The scheme, in general, is simple: help off relatively weak shooters to limit Nikola Jokic and stop penetration while preventing good shooters from getting open looks from three. The Spurs are more than willing to concede pull up jumpers in the midrange and above-the-break threes to most of the Nuggets’ roster, refusing to even close out in some cases.

The Spurs want Will Barton to shoot threes from the wing. They don’t even appear to care if the shots are wide open. They’ll gladly take the ball out of Jokic’s hands in the post or away from a guard penetrating into the paint if this is the result.

Barton’s not the only Nugget getting this treatment, either. The Spurs certainly haven’t executed perfectly, but they have successfully redistributed some of the Nuggets’ three point attempts away from their best shooters.

The Nuggets’ three best 3-point shooters in the regular season were Jamal Murray, Malik Beasley and Monte Morris. All three shot over 36% from deep on more than 2 attempts per game and combined to account for over 45% of the Nuggets three point makes on a little over 40% of their three point shots during the season. So far in this series, they’ve combined to take 17 while the rest of the roster has attempted 35.

That drop off in catch-and-shoot attempts is reflective of an overall reduction in the Nuggets’ three point frequency. After taking threes on about 32% of their shots in the regular season, threes have only accounted for 27% through Games 1 and 2 of the playoffs, per Cleaning the Glass.

The Spurs deserve a ton of credit for effectively executing that scheme through the first two games, but it’s a make-or-miss league, and the Nuggets have been very helpful in that regard. Even the successful reallocation of shots doesn’t explain how poorly the Nuggets have shot so far.

They’ve hit less than 31% of their three pointers despite the fact that 50 of their 52 attempts have been classified as open or wide open. Jamal Murray’s outburst in the 4th quarter of game 2 was incredible, but it was also bound to come from someone at some point.

This Spurs’ defense is not a lock down unit. At their best, they force their opponents to take slightly more difficult shots from slightly less valuable places. They aren’t going to dominate anyone for an extended period of time, and certainly not a team as talented as the Nuggets.

Unfortunately, the Spurs weren’t at their best for critical stretches of Game 2, and those breakdowns cost them the game. The 2nd half of the 3rd quarter, in particular, was a rough stretch that included a couple of very noticeable breakdowns.

LaMarcus Aldridge leaves Mason Plumlee to double team Jokic in the post, so Plumlee cuts to the rim. In the Spurs’ usual defensive alignment, Bryn Forbes, who’s the low man on the weak side, would help in out of the corner, but that’s not what the Spurs are doing in this series. DeMar DeRozan, who’s on Barton, should have gone with Plumlee, but he was late, so Bryn helped anyway.

Unfortunately, that left no defenders on the perimeter, so Jokic hit Barton on the left wing. Making matters worse, DeMar closed out in a way that allowed Barton to drive right by him. DeMar appeared to be trying to deter a pass to Gary Harris in the corner, but with Bryn recovering back to him, that wasn’t a priority. DeMar needed to break down and keep Barton in front of him, getting a hand up if Barton took the shot, but nothing more.

DeMar wasn’t the only culprit, though.

Davis Bertans does the doubling this time, but with two good shooters along the top of the key in Beasley and Morris, the Spurs need to close this out. The way they’ve been executing that so far is by switching the player who doubled, Davis, onto the other post player, Plumlee in this case. At the same time, the defender responsible for the other post player gets out to the corner to pick up the shooter.

But Plumlee’s timely curl under the basket disrupts that ballet. Davis just stands in the middle of the lane, guarding no one, while Rudy Gay follows Plumlee to the other side of the paint.

These are costly mistakes, but they aren’t the only reason the Spurs lost. On the whole, the team’s half court defense was good enough to win the game. Had a few more three pointers dropped on the other end or had they given away a few less points in transition, it could’ve turned out differently.

Still, the Spurs have shown over the course of 8 quarters that they can hang with the Nuggets. They got the split they wanted and head back to San Antonio for Game 3 needing only to protect home court to advance to the next round.

The Nuggets will certainly adjust to what the Spurs are doing, but the biggest adjustment they can make is to knock down those open looks. If they do, they’ll win, but as usual, the Spurs are playing the odds. If they can clean up their execution and stick to the scheme, they’ll have a great chance at pulling off the upset.