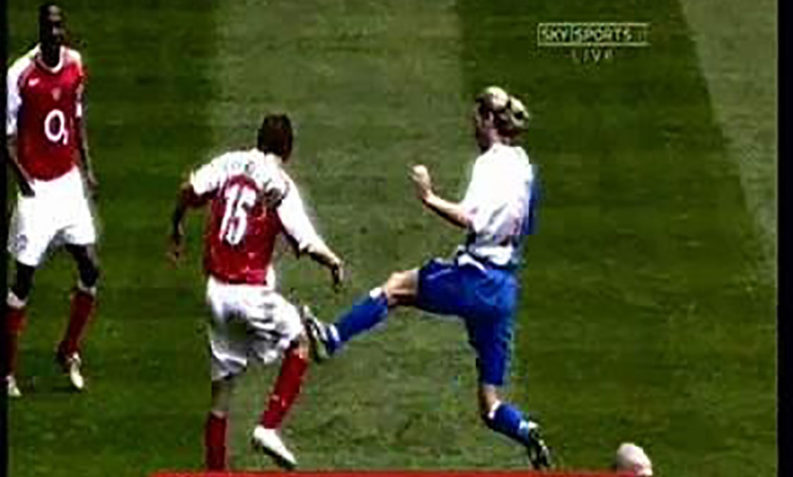 As there’s nothing much going on, and the future looks uncertain and scary, let’s go back in time to see what happened on this day in years past. I should admit that I’m just writing this without having done any research so I’m keeping fingers crossed that some interesting stuff went down.

Otherwise this is gonna be a pretty dismal blog and I may have to start again. I feel I’ve come too far to do that though, so let’s just jump in.

An unusually succinct blog entry. Here it is in full.

At this stage of the season, listening to football on the radio is like sliding down a razor blade and using your balls for brakes.

Not for long. Our next game was that 2-2 with Bolton when Sam Allardyce’s team kicked about three of our players off the pitch with injury, and Martin Keown scored a late own goal. The next game was when Leeds came to Highbury and bloody Mark Vi-bloody-Duka scored in the 88th minute and that was that in terms of the title.

Oh well, at least we got this off to a cheery start. I suppose the slight silver lining is that the 6-1 win over Southampton after the Leeds game was the start of the 49 game unbeaten run, so …

Down the years I’ve written Arseblog almost every day. The only time there was a gap was in April 2004 when I had to go back from Spain to Ireland because we found my mam had been diagnosed with a serious illness. I don’t know why Tom didn’t do it, perhaps it just didn’t feel important enough.

Anyway, while I was in Ireland I remember going out with my brother and some of his mates to watch a Friday night football extravaganza: Arsenal 5-0 Leeds. The game when Thierry Henry scored four goals and left the pitch with the match ball and Michael Duberry’s soul.

I even remember the pub we were in: Sinnott’s underneath the St Stephen’s Green shopping centre. It’s not a great bar by any means, but back then it was one of the only ones in town with lots of TVs so you could see the game wherever you were.

Leeds was just awesome. I watched it in the pub, surrounded by Pool, Villa, Spurs and United fans, and they were all gracious enough to acknowledge how good we, and four goal Thierry, were.

I can clearly recall the sense that while club rivalries are important, the people in the bar – most of whom were not Arsenal fans – just enjoyed seeing an amazing football player absolutely tear another team to shreds. It’s rare that even grudging respect is given to an opposition player, particularly one who has probably scored against you and then celebrated like your entire club were worthless ants, but it happened that night.

Let’s watch it again, shall we?

Man, we were so good.

This blog touches on an upcoming game against Chelsea with focus on Ashley Cole who can’t say anything about anything because of a Premier League inquiry into something.

However, I was also quite angry in this one because of a nasty challenge on an Arsenal player by a pantomime villain: Robbie Savage on Cesc. I took umbrage at the fact there was no punishment for the picture below: 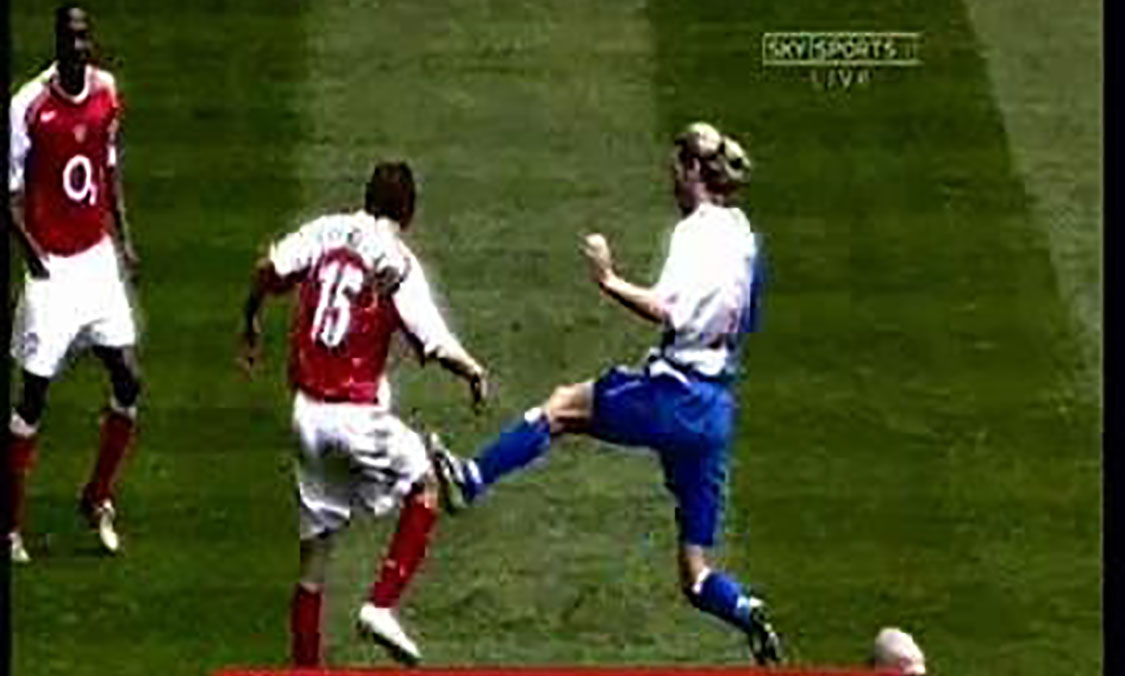 Excuse the grainy nature of the image, but that’s what TV looked like before HD. Anyway, he got away without even a booking, so I was cross:

I wonder if the FA are going to investigate the Robbie Savage incident in last Saturday’s game. If Jose Reyes and Dennis Bergkamp can get three match bans each for violent conduct after a bit of slap and tickle against Sheffield United then why should Savage not get brought to task for this assault on Cesc (see if you can spot the ball. No? I couldn’t either).

‘Tackles’ like that, where there is no attempt to play the ball and only intent to cause injury to a fellow professional, need to be punished more severely. As it is the FA should be questioning why the referee didn’t give so much as a free kick to Arsenal for the incident and Robbie Savage should count himself lucky that he didn’t cause serious damage to Cesc because if he had I’d hunt the fucker down myself and kick his bollocks out through his mouth.

Haha, I have mellowed a bit. If that happened these days, I’d only hunt Robbie Savage down and slap him in the face with a wet fish.

So tonight’s the night. The final ever European game at Highbury and Arsenal’s first ever Champions League/European Cup semi-final.

Arsene Wenger has spoken about it being the final European game at Highbury. He said “I feel part of my soul is in the stadium because many of the biggest moments of my sports career have been there. It will be something special because his stadium has a special soul and to lose it one day will be sad. But I think it will help tomorrow because it is a special occasion for us and we want to be proud of that.”

This was a 1-0 win over Villarreal in the Champions League (of course). Kolo Toure scored the only goal in what was a tight game. It set us up well for the second leg in Spain, and we all remember what absolute torture that game was, the late penalty, Jens Lehmann v Juan Roman Riquelme. Like two cowboys facing off in an old western, pistols at dawn.

I’ve never seen anyone do a drier spit than Riquelme as he waited to take that spot kick. At that point you knew he was struggling, his nerves were at him, and Jens made the save. We were through the Champions League final, where it ended prematurely for the German and we were robbed by the lack of VAR which I obviously hate but I want to go back in time and implement for just that game because OFFSIDE FOR FUCKS SAKE!

Anyway, there you go. A trip down memory lane ends here. More from me tomorrow, and myself and James will have a brand new Arsecast Extra for you.