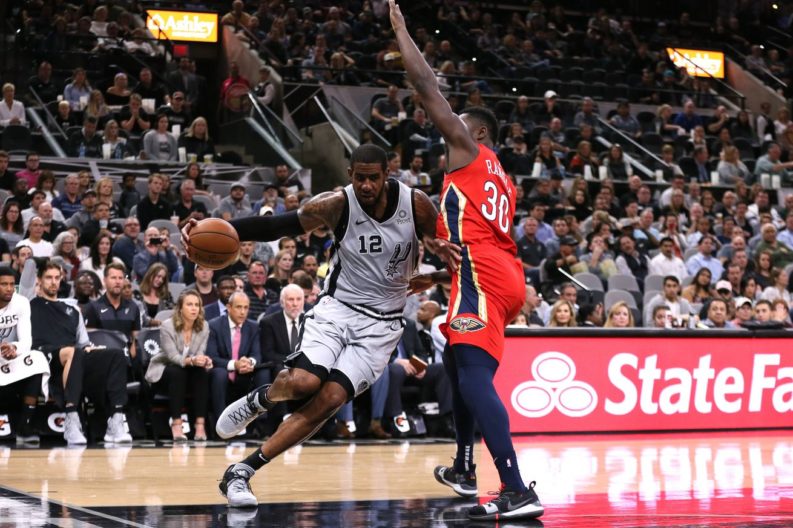 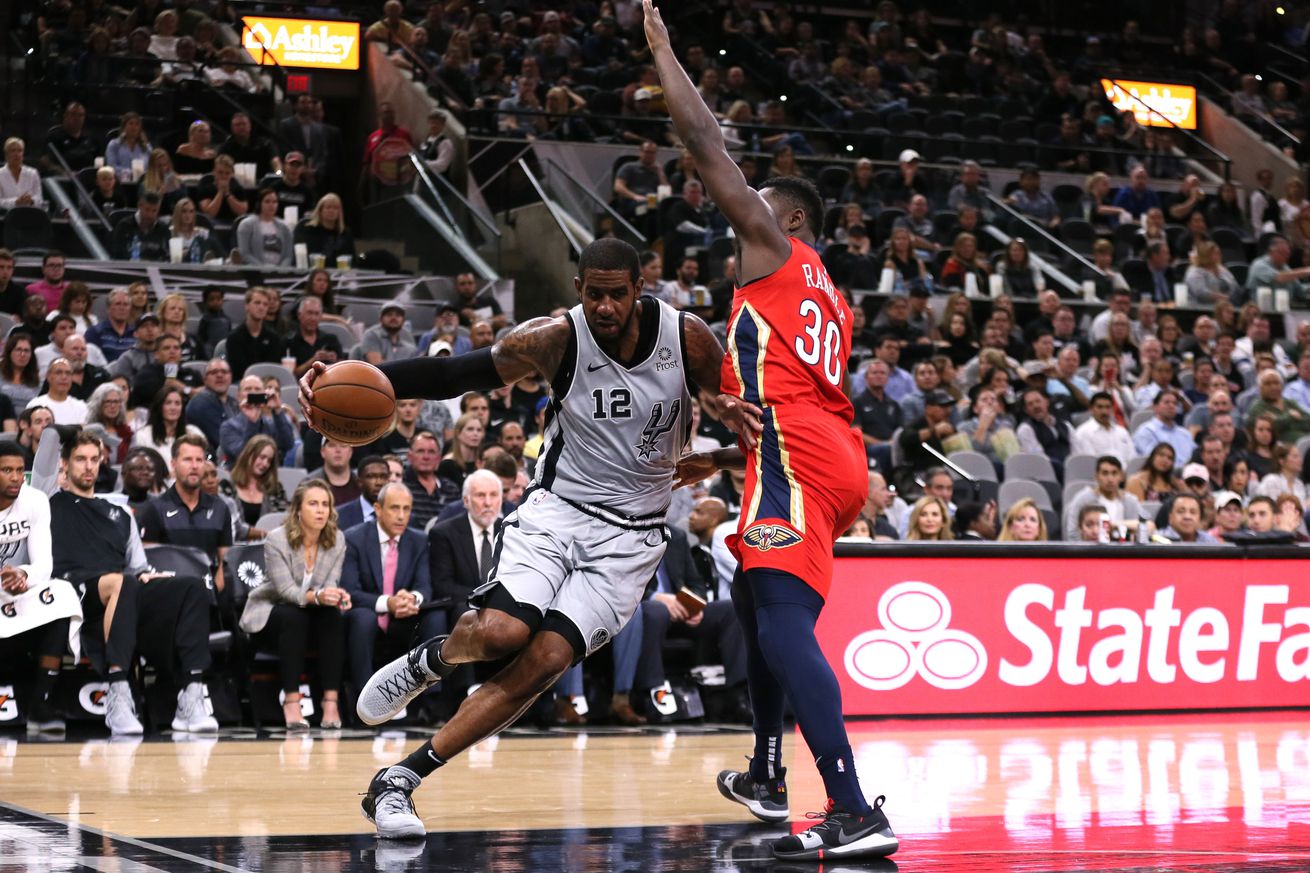 LaMarcus Aldridge and DeMar DeRozan lead the Spurs to their fourth straight win.

The Spurs, led by LaMarcus Aldridge’s dominance in the paint and DeMar DeRozan’s usual contributions easily outpaced the New Orleans Pelicans, dominating most of the game except for a late Pelicans run that made the score look slightly more respectable. Besides the stars, the Spurs got solid contributions from Dante Cunningham who had his best scoring game of the season, and Marco Belinelli who scored clutch points late to blunt the New Orleans comeback attempt. The Spurs won their fourth game in a row, and their defense continues to improve, although it’s still suspect against transition offense.

Anthony Davis started for the Pelicans, while the Spurs started a small lineup of Dante Cunningham, Rudy Gay, LaMarcus Aldridge, Bryn Forbes, and DeMar DeRozan. After a few fruitless possessions, Forbes stole the rock and took it to the hole with the only contest being from a surprised ball boy who had to clear out quickly. Anthony Davis gave the Pelicans the lead with a pair of free throws and a mid-range shot. Rudy Gay answered, but a deep shot from Nikola Mirotic gave them a lead. The Spurs started a little cold from the field, missing wide-open looks and the Pels surged to an 11-4 lead on Jrue Holiday’s jumper. The Spurs continued to struggle on offense, but they turned up the defense, diving to the floor after loose ball and an unexpected triple from Cunningham brought the deficit back to 17-13 with 4 minutes left. An offensive putback from Belinelli and a layup from Aldridge later, the game was tied up with 3 minutes left. The scoring streak continued for the Silver and Black, 14-0 over three minutes to take a 24-17 lead late. And that’s how the quarter ended. In this year’s NBA, holding the opponent to 17 points in a quarter is unbelievable, but somehow the Spurs did it.

Mirotic scored first for the Pels in the second quarter on a fast break. Rudy Gay had the answer with a behind the back dribble drive to the basket. Patty Mills extended the lead to 9 with a triple. Julius Randle drew fouls from the Spurs, but he couldn’t hit his foul shots. Dante Cunningham and E’Twaun Moore swapped triples and the Spurs maintained their lead at 9. The Spurs turned defense to offense, with a steal for Forbes turning into a fast-break alley-oop dunk for DeRozan to put the Spurs up by 13 halfway through the quarter. LMA bodied Davis under the basket for a layup to extend the lead to 15, soon to become 18 with a Forbes mid-range and one. Meanwhile, the missing of foul shots became contagious, as even Davis started to clank freebies. Belinelli’s cuts helped the Spurs to score, but key plays from Moore and Holiday on the Pelicans kept it from being a blowout for the Spurs. LaMarcus Aldridge buried Davis under the backboard to score the final points of the quarter on a putback of a missed DeRozan shot to make the score 58-39 at the half. They outscored the Pels 34-22 in the quarter.

Holiday opened the third with a drive to the basket for an easy layup. Mirotic started to do damage to the Spurs lead, and Wesley Johnson got a three after the Pels recovered the ball on a bad out of bounds call. After a pair of free throws from Davis, the lead was cut to 14. Once again, Aldridge took the ball right to Davis, and dished to Cunningham for an easy dunk. Mirotic made plays for New Orleans, but Patty Mills heated up and Aldridge did work to bring the Spurs lead back to 20 with 4 minutes left in the quarter. DeMar Derozan answered Ian Clark’s jumper with an and-one basket to maintain the margin. Holiday was getting hot, and he cut into the lead with mid-range shots, but the Spurs fought back with defense, extending the lead to 21 on Patty’s late triple. The Spurs were up 19 after three 87-68.

LMA continued to bully Davis in the paint for an easy basket to open the fourth quarter scoring. Randle got fouled hard by Pau Gasol, but continued to miss free throws. After a sloppy turnover led to an easy fast break for Davis, Pop called a quick timeout with 9 minutes left in the game. Holiday took it to the basket and hit a triple to cap a 9-0 run for the Pels to cut the lead to an even dozen. DeRozan, unstoppable in the mid-range, almost matched their pace in scoring, although they couldn’t get stops. A big three point bucket from Cunningham put the Spurs up 100-87 with 5 minutes left. It wasn’t over yet, as they cut the lead to single digits on a Mirotic layup with just over 3 minutes left, turning up the defense and getting quick easy baskets on the other end. After a score correction (three point shot corrected to two), the Spurs led 102-92 with 3:19 left in the game. Holiday once again cut the lead to single digits, but Belinelli answered with one of his patented cuts to the hoop. Randle took the ball to the basket, but Mills smartly fouled him, and he missed his freebies again. Another steal from Belinelli and the Spurs moved it back to him for an open three in the corner to put the Spurs up by 13, sealing the game with a minute left. Pop put in the deep bench, giving Chimezie Metu, Quincy Pondexter, and Jakob Poeltl a brief break from sitting on the pine. The Spurs ran out the clock to win 109-95.

Love will tear us apart, while we dance awkwardly.

The Spurs play here again tomorrow at 6:00 PM against the Orlando Magic. They don’t have to travel, and they gain an extra hour of rest because of the time change, so it’s probably the most player-friendly back-to-back possible, unless the first game were an afternoon contest. Hopefully, the Spurs can take advantage and extend their record against the struggling Orlando squad.