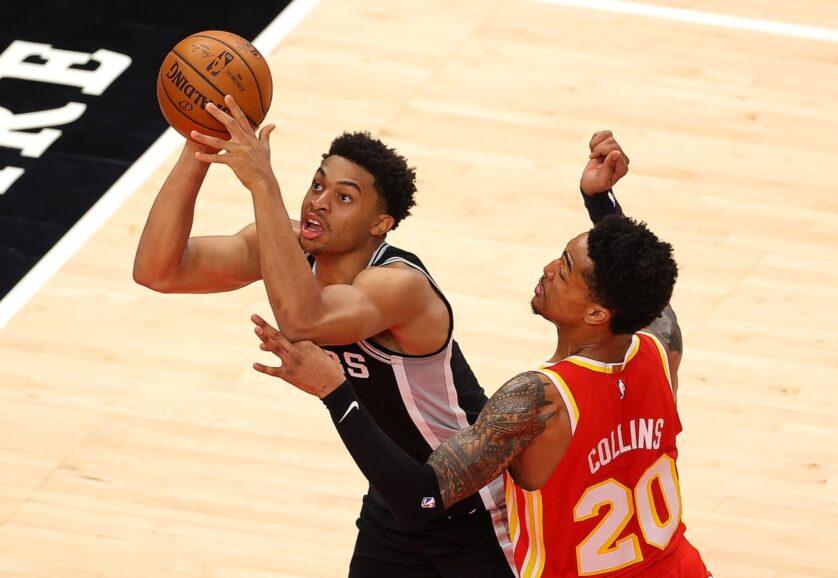 In a season full of ups and downs, Keldon Johnson has me excited for the future of the San Antonio Spurs. Rising from a 29th pick to a full-time starter after just one season, it’s easy to see why Gregg Popovich surprised everyone by giving the 21-year-old a starting gig after just 17 games of experience.

Johnson has become one of the most exciting young players to watch in the league with his relentless attacking and endless energy. While Kawhi Leonard isn’t replaceable, the rise of Johnson and Jakob Poeltl has at least eased the pain of the messy breakup.

Through 60 games played, Keldon is averaging 13.0 points, 6.4 rebounds, and 1.8 assists in 29.1 minutes. Johnson’s ability to crash the boards was on full display in a March game against Cleveland in which he scored 23 while pulling down a career-high 21 boards in a six-point victory.

While his meteoric rise has been a joy to watch, opposing defenses are keeping an eye on Keldon as well. As I wrote recently, the league has figured out that most of Johnson’s game stems from hustle plays and bulldozing drives to the basket.

Disciplined defenders know the best way to slow down Keldon is by anchoring themselves just outside of the restricted area and awaiting the charge. That’s exactly what Ben Simmons did on multiple occasions in a nail-biting 76ers victory over a shorthanded Spurs squad on Monday.

The two weapons Johnson needs to develop are his outside shot and a floater. His 3-point shot has had its moments, but he’s not a guy you need to chase off the line quite yet, especially when you consider how lethal he is in the paint. I think Keldon’s perimeter shooting will be just fine, especially when seeing his form and the presence of Chip Engelland.

What I want to focus on is the latter — a Tony-Parkeresque floater. While it’s been extremely rare, Keldon has shown the ability to make such a shot as recently as last week against the Miami Heat. Here, Bam Adebayo likely would have highly contested or blocked his shot, but Keldon pulls up for a pretty teardrop.

How one teardrop could propel the San Antonio Spurs and Keldon

It might just be a simple shot, but if Keldon is able to develop a reliable teardrop, it could dramatically improve the Spurs’ offense. As it stands, Johnson is putting up 17 points per game in the last five all while defenses know what’s coming. Predictably, they’re sagging back on Keldon on offensive sets, but his jumper and hustle points are still bringing him success.

Adding a floater to his game would make defenses second-guess crowding the paint, meaning they’d have to step further out. That, in turn, opens up blow-by opportunities from the slashing forward.

One guy Johnson can study is rookie Tyrese Haliburton. The Kings guard is averaging similar statistics as Keldon, and his floater has been absolutely devastating all season. Of course, the fact that he’s shooting 41 percent from downtown also opens up the chance for that shot more often.

Keldon already has the slashing game down. He’s slowly picking up his outside shooting as well, bringing his average up to 40 percent in the last seven outings.

Getting a reliable teardrop to mix in his bag will take Johnson’s game to the next level, and it’s something I’d love to see as soon as possible.