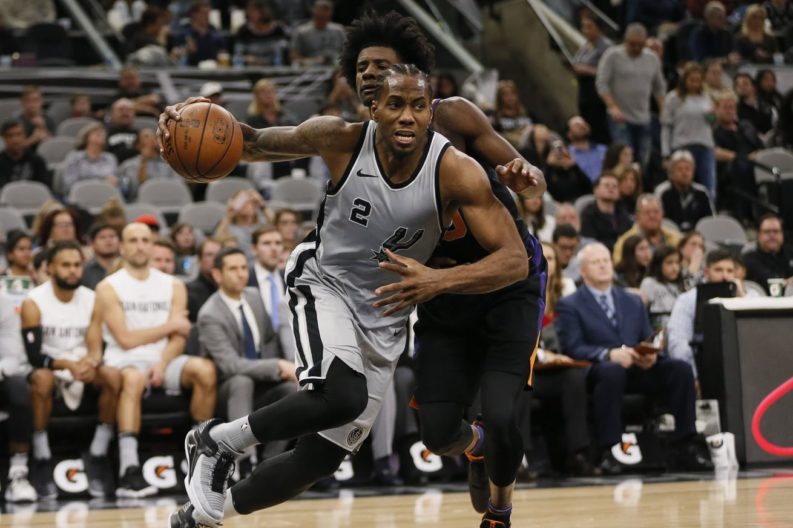 What trade deadlines mean when there are conflicting reports about what’s going on.

A lot has been happening this week in San Antonio. Jalen Rose broke the news that Kawhi Leonard indeed wants out of San Antonio. It has since been backed by nobody and with the open door policy on all Spurs happenings, we are left to ponder what is going on behind the eyes of possibly the most expressionless superstar in the NBA.

Honors and accolades for Tony Parker, Pau Gasol, and Dejounte Murray all took a backseat to LeBron James scoring his 30,000th point at the AT&T Center. Meanwhile, Tony took to the bench in what looks like a permanent change in the line-up.

LaMarcus Aldridge is headed to Los Angeles for All-Star Weekend and will play on Team LeBron while the ever-looming NBA trade deadline lurks in the darkness.

These questions were posed to the panel on Saturday after a very depressing loss to the Philadelphia 76ers. For topics covering this weeks schedule which includes the Sacramento Kings, Denver Nuggets, Houston Rockets, and the PtR sponsored game against the Utah Jazz, check back next Tuesday.

Gut check- will Kawhi Leonard be a Spur in two weeks?

Mark Barrington: If Kawhi isn’t on the Spurs at the end of the season, I promise to eat a hat. I have lots of hats, at least one should be somewhat edible.

J. R. Wilco: How could the Spurs pull out all the stops to keep LaMarcus (and turn that situation from a weakness to a strength) and not do the same with Kawhi when he’s not just the team’s present but its future? He’ll be a Spur.

This week Tony Parker took a role coming off the bench and Pop was quoted as saying “it was time”- agree or disagree?

Gomez: I disagree. I think Parker should have ended this season as the starter. He’s still the best point guard on the roster, on the aggregate. But maybe that doesn’t matter to Pop and he’s pursuing matchup advantages. So I respect the decision.

Passos: It’s “time” for both sides. Parker is 35 and can remain an impactful player if his minutes and role are managed right. It’s also time for the Spurs to not only start developing their 2016 first-round pick but also begin to understand exactly what they have in him, as it could affect how they map out the next few years.

Barrington: Sure. It’s time to develop Dejounte. He’s never going to get better sitting on the bench, and he’s going to develop faster against top talent than he will feasting on second units. Tony will provide some needed scoring punch for the second unit, and it’s a lot easier to limit his playing time and conserve his old quads when he’s coming from the bench.

Dubinski: It seems so. Parker himself said he had hit a wall after the adrenaline rush of his return from injury, so it wouldn’t surprise me if this was more a mutual decision by both parties than we have been led to believe. There’s nothing wrong with getting Murray more experience, but if the Spurs find that Murray isn’t ready for the job in the playoffs, I can see them going back to Parker as the starter.

Wilco: I’d say that a huge part of what “time” it is has to do with San Antonio’s overall health situation, how stuck they are below the Warriors and Rockets, how little possible upside there is even if they get healthy immediately, and how little damage an unproven/developing point guard can do under the circumstances. All season long, I felt like DJ was two years away — and with the fact that he’s the starter now, I’ll simply revise my assessment to say that he’s two years away from being able to do a good job at the majority of the things the team wants from a starting point guard.

LeBron becomes the youngest player to ever hit 30,000 points. He’s a contender for a 5th MVP award. Is he the greatest player of all time?

Gomez: It’s possible. I’m old enough to remember the run Jordan had when he first came out of retirement, so it’s hard for anyone to usurp that spot at the top. James has come really close, though, and maybe when nostalgia doesn’t play such a big part in my evaluation, I’ll admit that he’s probably better than MJ.

Passos: The GOAT conversation for me is just that — a mental exercise of what players have earned the right to get there — but the debate as to who is at the top is too circular and subjective for me to get into. He’s a top-5 player, a transcendent talent who came into the league as a teenager riding a wave of hype and actually exceeded it, and it certainly doesn’t bother me if anyone wants to consider him the best ever.

Barrington: I don’t think you can make that judgment until after a player retires. Sometimes more than once, as in Michael Jordan’s case. I think if he can keep performing at his current level for a few more years, he definitely deserves consideration. But his productivity has been slightly less lately, and despite his relative youth, he a lot of miles on the odometer. So I put his chance at slightly less than 50% of earning that honor. It would be great if he came to San Antonio to finish out his career, he could get his points in few minutes and possibly play longer if he wanted to. He’s already made more than enough money, but he might have some additional goals that would keep him going in a place that provided the right environment.

Dubinski: He’s definitely top 5, maybe 3. I just think unless he can reach the five-championship threshold, he will always have his doubters. The drama he carries around with him also doesn’t help, although I imagine if MJ had been of a generation that provided similar public access into players’ minds (like social media), it would have been similar for him.

Wilco: I think the closest you can come to being the GOAT is having your name discussed in those conversations a good ten years after your career is over. So, while it’s premature to reach a decision on this now, I’d say that James (and his supporters) will have a seat at that table a decade after he finally hangs them up.

Dejounte Murray had one of his greatest games against the Cavaliers. Are you sold on his ability or is the jury still out?

Gomez: Murray has the talent and the physical tools to be a top 10 point guard. He just doesn’t know how to channel them. What he does well, he mostly does so on raw skill and instinct alone. The rest of the time he looks clueless. I’m bullish on his prospects down the road, but the jury is still out on whether he can be a plus this season.

Passos: His current ability isn’t what’s going to get him to where he wants to be, but I’m sold on his attitude, upside and the situation he’s in. I think he’s going to be very, very good.

Barrington: I’m sold on his potential, but he still has glaring holes in his game. He has no midrange shot, and he has trouble finishing on drives to the basket. He’s an unfinished product, but his arc of improvement since he joined the Spurs has been monotonically ascending. If he can keep it up by working hard and learning from the veterans on the Spurs, he will be a very good NBA player in a couple of years. It’s all up to him. He’s already an elite rebounder and a good defender for his position. His offensive game needs a lot more polish.

Dubinski: I’m definitely sold on his potential, but until he develops any semblance of a jump shot he will remain a somewhat limited player for a guard. He also needs to work on his decision making. For example, as mentioned against the 76ers he tried several times to take the ball to the rim against multiple defenders instead of waiting for his teammates to get back, to no avail. He has all the physical tools to be a special player, he just needs to hone them.

Wilco: I’m sold on Murray’s defense, his rebounding, and his driving ability. Less so on his passing skills. And least of all on his ability to finish around the basket, shoot, run the team, break down a defense, get the ball to his guys where they like it, regularly make good decisions, run a fast break consistently, and a host of other things that make Pop describe the point guard position as the most difficult in the NBA. But I’ve seen nothing from him that would make me believe that he’s unable of adding these skills, so I’m still sold on him overall. That said, Wayne Vore and I have an ongoing text conversation where we do almost nothing but gush about Dejounte’s progress and accomplishments.

Should the Spurs make a move before the trade deadline? If so, what should they look to do?

Gomez: Rodney Hood is reportedly available. He could be a killer sixth man going forward or even the starting shooting guard if Danny Green leaves in free agency. He would definitely help this season. And he’s on a rookie contract, so matching salaries wouldn’t be a huge issue. The Jazz might want more than a late pick and middling young talent for him, however. I don’t think Hood to San Antonio is happening, but I’d be happy if it did. Oh, and if the Kings are serious about dumping Skal Labissiere, the Spurs better be ready to pick him up.

Passos: It’s hard to make a move when you don’t know what kind of hand the team is sitting on. If Leonard was definitely coming back this season and better resemble his former self, sure — an ambitious move would be fun. If an easy upgrade is available, that’d also be fine. Otherwise, I’d completely understand it if the team stood pat and braced for whatever is to come in the second half of this season.

Barrington: Among the players available, I like Kemba Walker the most, but acquiring him would cost too much and would end up impeding Dejounte’s development. I would like to see a better backup big on the team than Joffrey Lauvergne, but I doubt there will be one available for a reasonable cost.

Dubinski: My dream trade still consists of bringing Boban back just because it would make me happy, but that would require giving up one of our moderately paid players like Patty, Danny or Rudy. Of the three I’m lowest on Patty, and he might be less important now that Tony has taken on the back-up PG role. Regardless, I don’t think the Spurs will seek to make a trade at the deadline. I’m sure they’ll do their homework, but it will probably require someone coming to them with an offer too good to refuse.

Wilco: I’d be nothing short of shocked if the Spurs made even a medium-sized move before the trade deadline. In order to improve your team you need to know where it’s lacking, and we have literally no idea of what this current roster is capable of with a healthy Leonard playing every game. So why would PATFO deal anyone before they know what offensive and defensive holes remain after Kawhi returns? I just can’t see it.

If you have a question you would like posed to In The Bonus, type it in the comments or contact Jeph Duarte on Twitter: @jeph_duarte or via email: jephduarte(at)yahoo.com