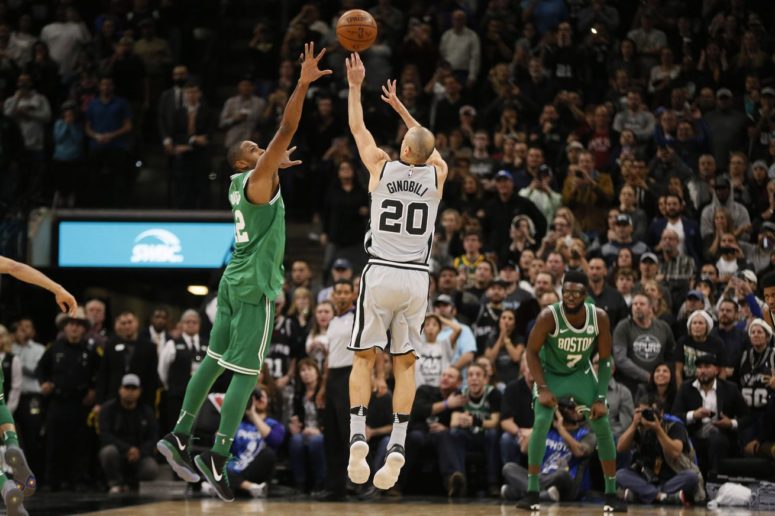 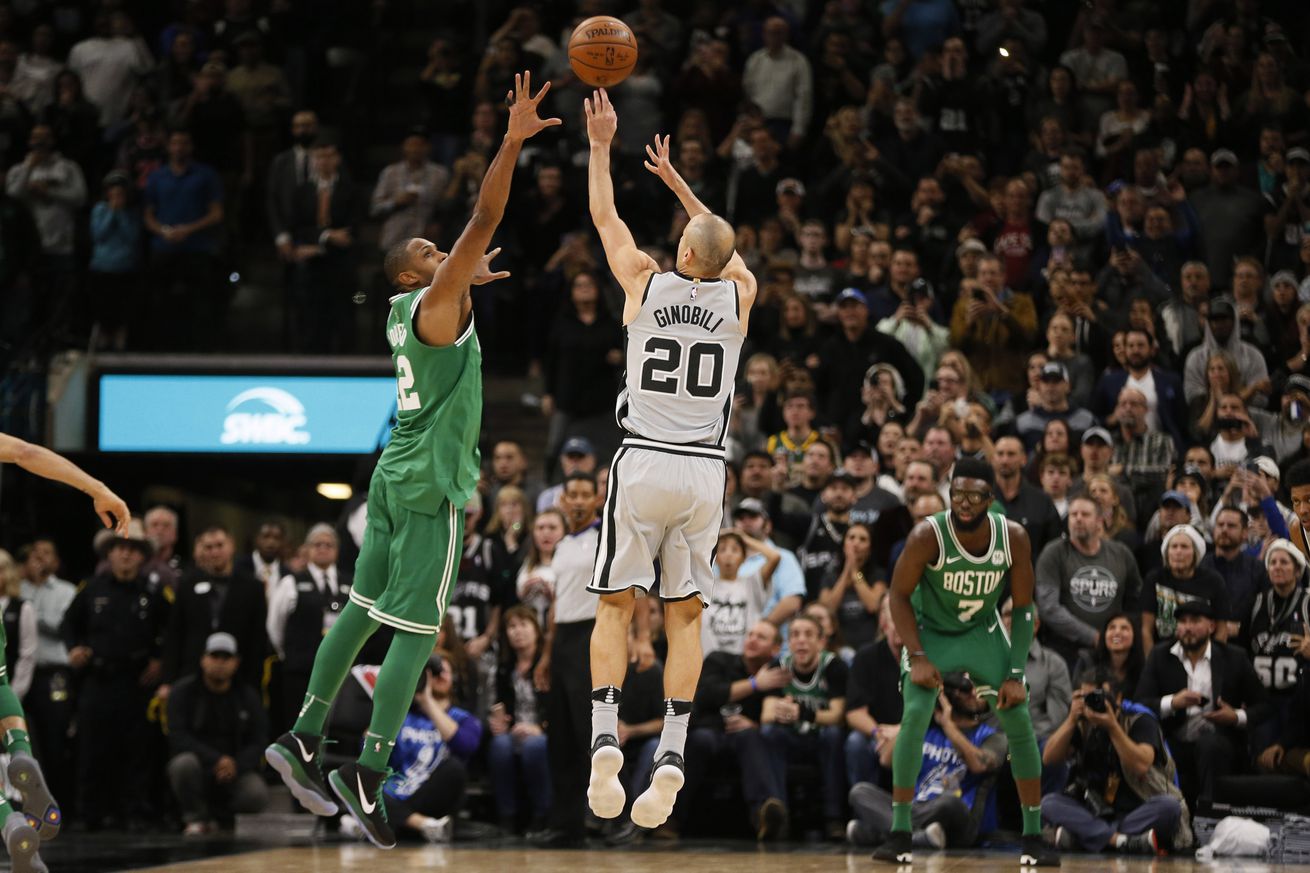 This week’s roundtable takes on what may be the biggest question mark to face San Antonio this season.

In this week’s roundtable discussion, PtR contributors Jesus Gomez, Marilyn Dubinski, Bruno Passos, Mark Barrington, and editor-in-chief J.R. Wilco take on a huge question mark hanging over the San Antonio Spurs: how they handle the return of Kawhi Leonard. They also discuss LaMarcus Aldridge’s defensive acumen, the minutes distribution while Anderson is recovering, Forbes’ longevity, and thoughts on the first regular season meeting between the Spurs and their I-10 rival Houston Rockets.

A lot has happened since the Spurs role players near-upset over OKC and when Manu ruined the night the entirety of Bean Town. So let’s jump right in.

Buffalonian Spur asks: how will the Spurs change once Kawhi gets back?

Gomez: That’s the biggest question of the season, really. One that I’m sure PtR will have to explore in depth for a good portion of the season. I’m a worrier, so my mind immediately goes to the possible struggles to incorporate him. Aldridge has been terrific as the first weapon on offense. He’ll have to adjust to a new role once Kawhi returns. I don’t know what Kyle Anderson’s role is going to be once he goes back to the bench, or how well he’ll fit with that group. In my eyes, those are just a couple of real concerns. But getting Kawhi back will also obviously have positive effects on both ends. He’s a legitimate superstar and those always make their teams better.

Dubinski: For starters, the bench is going to get a lot stronger. As far as the starters go, it definitely will add another scoring punch and take some pressure off of Aldridge. The challenge will be find a way to let Kawhi be Kawhi while also keeping Aldridge engaged. If they can find a happy medium and learn to work off each other, this team could be almost unstoppable.

Barrington: I think the Spurs starting unit will be better because Kawhi’s shooting will give everyone else even more open shots. The backups will be improved because Kyle Anderson will be there to stabilize the bench unit and distribute the ball.

Passos: I expect them to revert back to some of the old habits from last season — some Kawhi isos, a few more long twos — but this is a new team, with a rejuvenated Aldridge and designs for way more small ball. In time, I think we’ll see some new stuff, but I have no idea what it’ll be.

J. R. Wilco: There will likely be less Beautiful Game highlights from the starters, but less passing means a decrease in turnovers, so that’s a wash. There will be fewer stretches where the team has difficulties scoring, which means their overall offensive rating will climb. They will have a bona fide crunch time monster, so their performance in close games could get even better. But finally, getting Kawhi back means they go from being a feel-good story to a legit championship contender.

Aldridge held Al Horford to 2 points Friday night? Fluke, or is defense yet another facet of his All-Star resurgence?

Jesus Gomez: Aldridge’s defense has been phenomenal, even before his great performance against Horford. He’s being physical when he’s had to, even when matched up with centers. That was an issue with him in the past. Not anymore. His help defense has improved to the point that he’s a legitimate rim protector. He’s not going to be elite on that end, because he’ll always struggle a little containing guards on switches, but he’s reached his full potential as a defender with the Spurs. So far, he’s been their backbone.

Marilyn Dubinski: Aldridge’s defense was near All-Star level last year; it just got overshadowed by his relative shortcomings on offense. Still, his defense has been All-NBA level this season, and I think his performance against Horford was no fluke. He won’t always hold him to to 2 points, but as long as Aldridge is engaged, his size advantage should always win out.

Mark Barrington: It was both, the defense was good, and Horford didn’t have a good game. Aldridge has been really good on defense this year, but nobody is that good.

Bruno Passos: His defense was stellar last year, so this doesn’t feel all that new to me, and it’s certainly not a fluke. It should definitely be a part of his All-Star case, though.

Wilco: Basketball is a game with hundreds of points a contest. The offense has the advantage and even stellar defenses sometimes get lit up. You can do everything right on a possession and still allow a score if someone’s improbable shot goes in. So holding Horford to 2 points was a fluke, but that doesn’t mean LMA doesn’t deserve credit for making it so difficult on him. The year Aldridge is having defensively has been good enough to warrant some DPOY noise.

For as long as Rudy Gay starts, who should get his bench minutes?

Gomez: Davis Bertans should continue to get minutes for as long as the Spurs are shorthanded at the forward spots. He’s gotten a bump in playing time over the past five games, and he has done well in that increased role. There’s a case for going even smaller in the perimeter and giving some minutes to Brandon Paul to improve the perimeter defense. But Bertans is not a bad defender himself when he’s not trying to do too much and his shooting is just too good of a weapon to ignore.

Dubinski: So far it has been Davis Bertans with a little bit of Brandon Paul sprinkled in, and that has worked out well. Even once Kawhi returns I’m sure he’ll have some rest games, so the question then will be whether Pop goes back to starting Kyle Anderson or Gay.

Passos: It’s all fluid right now, given the injuries, so I say just keep rolling Davis out there in the short term. His defense has been better in year two, his rebounding’s improved, and he’s so fun to watch.

Wilco: I can’t get enough Davis Bertans in my life, so even while I really like Brandon Paul, I’ve got to lean towards the Latvian with the sweet shot who can make plays like this.

Bryn Forbes‘ contract becomes fully guaranteed on January 10. Do you think he’ll be on the roster past that date?

Gomez: For some reason, I thought Forbes was not going to survive training camp, even after his amazing run in Summer League. Then I was expecting him to be waived before his contract became guaranteed, especially if a big man got hurt and the Spurs needed an emergency back up center. He’s still on the roster and now I can’t possibly imagine him being waived. He’s earned his spot.

Dubinski: I think he’ll retain his spot. He’s done too well and worked too hard to get kicked to the curb, and with all the praise and Steph Curry (not Seth Curry) comparisons Pop has thrown his way, I just don’t see him letting Forbes go that soon. The only way I see that changing is if either Aldridge or Gasol suffer a season-ending injury and the Spurs desperately need to sign another big.

Barrington: The team is paying him a very low salary by NBA standards and he’s an elite three point shooter who has proven that he can hit clutch shots in crunch time. He has worked really hard on his game and plays much better defense and has far better handles than he did last year and looks to be nowhere near his ceiling. Yeah, this is the biggest no-brainer of all time. He’s going to be on the Spurs roster for the entire year. And I hope a whole lot longer.

Passos: I do. There’s a bit of redundancy between what he and Mills can do, but he’s as good as anyone you can round out a roster with, and he’s still improving.

Wilco: I’ve been one of Forbes’ harshest critics. Coming into the season, I had a staunch put-up-or-shut-up attitude towards him since all of the talk about his great shooting only materialized when he played for the Austin Spurs and in the Summer League. But I must say that with his excellent offense (not just his outside shooting) and his improvement on defense — he’s won me over. I think he’s a Spur.

The Spurs meet the ”new look” Rockets next week. After last postseason’s battle, is this a rivalry again in your eyes?

Gomez: I’ve always liked the Rockets. I was a big Dream fan as a kid. I thought Yao was criminally underrated. Luis Scola played there. I actually like James Harden’s game. But now that they’ve added the villain Chris Paul, all that good will is gone. I don’t know if the players consider it a rivalry yet. It would probably take another playoff battle for it to become one. But I have an unhealthy, one-sided para-social rivalry with Paul, so I want the Spurs to win this one.

Dubinski: If discussions with any of my Rocket fan co-workers are any indication, it’s a rivalry — at least they can’t refer back to the 90’s for the last playoff battle anymore. They hate the Spurs more than anyone, and even if the rivalry is on the friendlier side, classic match-ups like Chris Paul vs. Tony Parker and Pop vs. Mike D’Antoni certainly help.

Barrington: Absolutely, it’s a rivalry. They’ve figured out how to make the Chris Paul/James Harden combination work, and that makes them very dangerous. They’re going to be the biggest threat to the Warriors winning three of the last four this year, at least until the Spurs attain their final form.

Passos: In the sense that it’s two great teams, based a few hours from each other, coached by two highly respected basketball minds, led by two superstars with diametrically opposed styles? It’s definitely a rivalry, and one that should remain compelling for a while.

Wilco: It’s more of a rivarly than Spurs-Warriors. In fact, the Rockets scare me more than GSW does right now. Chris Paul has had his way with San Antonio defenses for ages and I don’t want SA to see the Rox in the playoffs any time before the WCF. (More on that in the future.)

Check back next week when In The Bonus will discuss Kawhi Leonard’s first week back, and all the Spurs news of the week.

Do you have a question for our panel? Post in the comments or email Jeph Duarte.