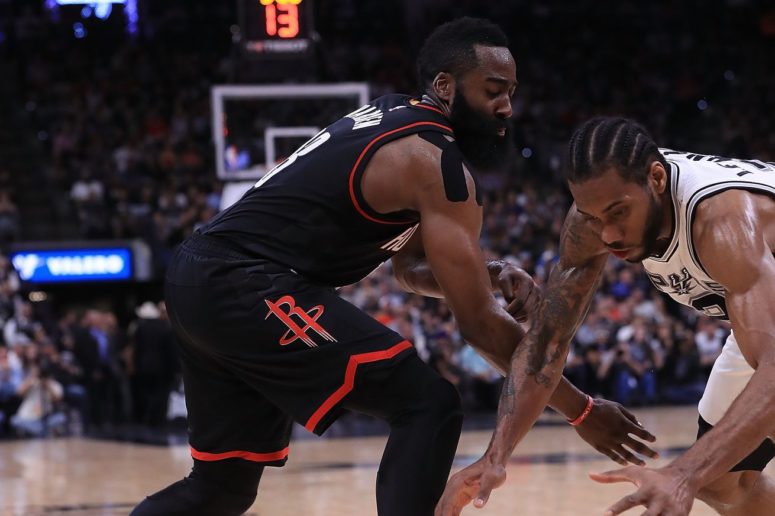 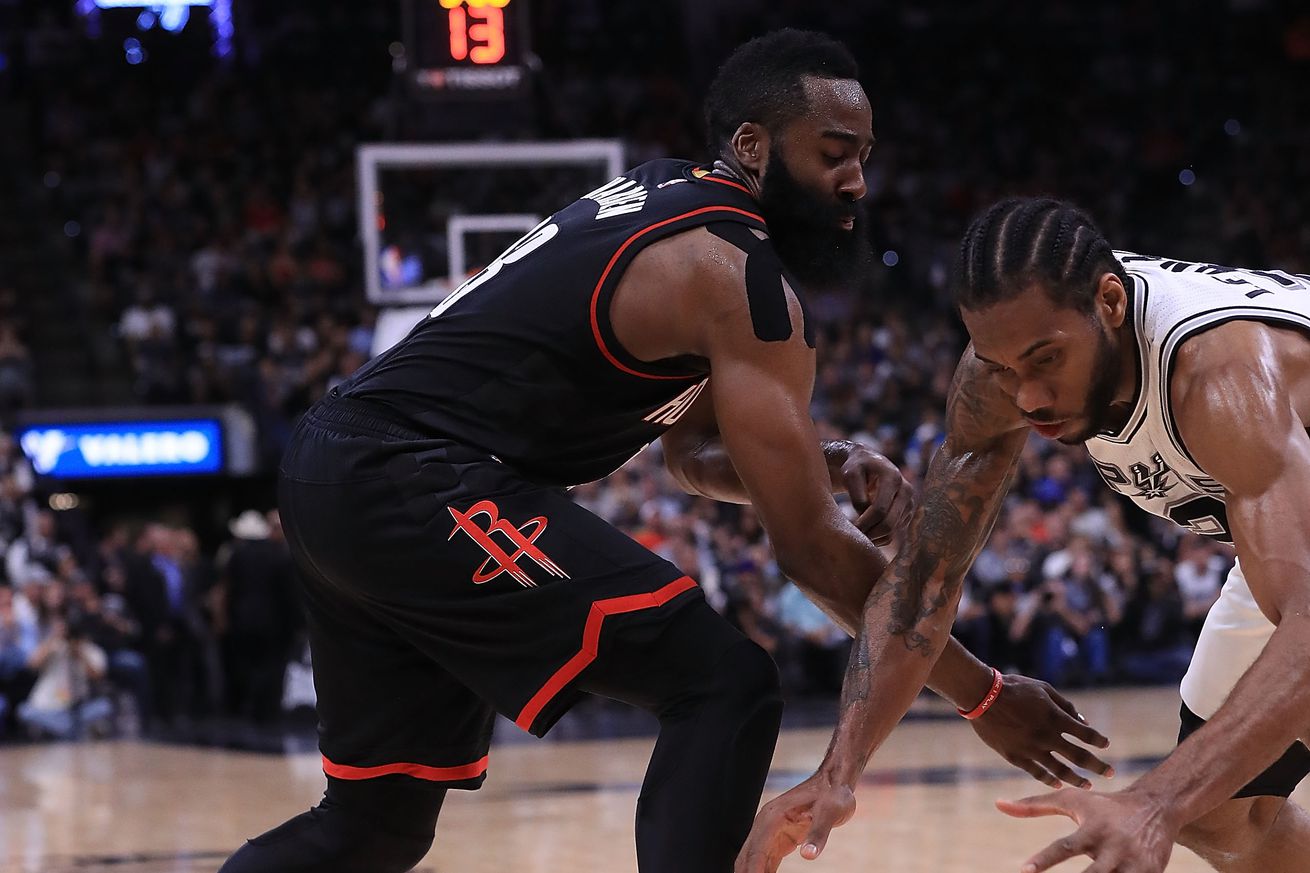 Coach Popovich made some key defensive adjustments in Game 2

The San Antonio Spurs 121-96 Game 2 victory over the Houston Rockets featured a slew of savvy adjustments by Gregg Popovich. He started Pau Gasol in place of David Lee, played several small ball lineups, and changed the coverages on James Harden pick and rolls. Harden finished 3-of-17 from the field with just 13 points. While some of that was him missing shots and not playing well, here are four defensive adjustments the Spurs made that were effective:

Zoning Up and Giving Trevor Ariza the Tony Allen Treatment

The move to insert Gasol into the starting lineup was surprising. After Game 1, fans and analysts alike were calling for Dewayne Dedmon to get a chance to protect the rim. If not Dedmon, there was an outcry for small ball (which the Spurs also featured). Nobody was saying play more Gasol or David Lee. But Gasol had 13 rebounds, six offensive boards and four blocks. He was effective defending the basket and was able to essentially play zone defense under the rim. One reason he was able to zone up was because he was guarding Trevor Ariza. The Spurs decided to give Ariza the Tony Allen/Andre Roberson treatment:

Watch Gasol see Ariza leaking out to the wing but just stay at home in the lane. This isn’t a pick and roll, Harden just blows by Danny Green, but Gasol crouches down with one foot in the paint and one foot out, ready to react whether Harden goes towards his inside or outside. Harden elevates directly in front of the rim, Gasol turns towards the basket and stuffs the shot with his left hand.

Ariza is completely ignored. After a great showing in Game 1, Ariza was just 1-of-5 on 3-pointers in Game 2. He shot just 34 percent from deep on the year, and leaving him open in order to allow Gasol to rim protect is a gamble the Spurs should continue to make going forward.

Another thing to note is that Aldridge is on Clint Capela here. Before the game I said the Spurs should put their best big man defender on Capela and their second best on Ariza, regardless of the personnel:

That played out in the above clip. Aldridge is on Capela absorbing pressure on the rim which allows Gasol, on Ariza, to provide a third layer of defense at the basket.

The Spurs hard hedged the pick and roll throughout Game 2. This allowed Harden’s primary defender, Leonard most of the night, to read and react. He went under screens at times, over on others, and was even able to get through in many situations:

In this clip, Gasol is on Capela and Aldridge is on Ariza. This is suboptimal, as Capela gets easier separation at the rim on Gasol, but this does give Harden a different look.

The initial play is a Harden/Ariza pick and roll. In Game 1, Leonard and Aldridge simply switched. This time, Aldridge hedges out, and Ariza, possibly anticipating a switch, jets out to the top of the key to get open. Watch again and notice he doesn’t even screen Leonard. This allows Kawhi Leonard to simply slide through and stay with Harden as he attacks. Although Harden still gets a pretty good look, he has Leonard on his hip and Gasol at the rim. The key here is the hedging initially looks like a switch, which fools Ariza and and allows Leonard to stay on Harden when Ariza releases without screening.

Here’s the same coverage, but with Green on Harden instead of Kawhi. It works seamlessly:

This time, Aldridge is on Nene and Lee on Ariza. This takes Nene out of the play as the Rockets want to attack Lee in the pick and roll. The Spurs use the same scheme as in the prior clip: Lee hedges out, and Ariza opens up for the jumper as he knows he’ll be open momentarily with his man hedging. But he doesn’t make any contact with Green. This allows Danny to get through untouched, keep Harden in front of him, and force a contested three. This is the same effect of going under the screen, but it’s even easier as Green doesn’t have to fight around any contact from Ariza.

Harden knows as soon as the hedger releases he’ll be open for three so he fires, but Kawhi gets a reasonable contest. Harden finished 2-of-9 on 3-pointers and this coverage prevents Harden from knifing into the lane and picking apart the defense. Anytime Ariza is the screener, the Spurs can aggressively hedge out.

Zone Up Capela and Play off Harden

In the above examples, the Spurs are able to hedge out and ignore Ariza. With Capela screening, Kawhi can still go under, but the big man needs to zone up Capela’s roll to the rim. If he hedges out, Capela will simply run to the rim and receive a lob. During this Harden/Capela pick and roll, Gasol wisely zones up the play, but watch Kawhi also back off Harden from the get go:

Look how much room Kawhi has when Capela sets the screen. He neither has to go under nor chase over the top. As soon as Capela slips the screen, Kawhi is able to slide through and pressure Harden on his drive. Gasol never has to fully commit to helping and can keep Capela within arm’s length.

The Spurs went away from switching big men onto Harden and instead hedged out on screens by Ariza and zoned up screens from Capela. Leonard and Green did a great job going under screens or simply sliding right through weak screens or slipped screens, allowing the Spurs to keep Harden in front of them, or at least stay on his hip when he drove. A lot of the coverage centered around ignoring Ariza, which allowed Gasol to protect the basket.

Expect the Rockets to counter by setting harder screens and trying to make the Spurs pay for hedging out. This is where zoning up more will come into play. The Rockets will likely also go to more Harden/Anderson pick and pops, as the Spurs have yet to figure out how to defend that. Navigating these picks and rolls is a challenge, but anything to avoid switching bigs onto Harden is a step in the right direction.