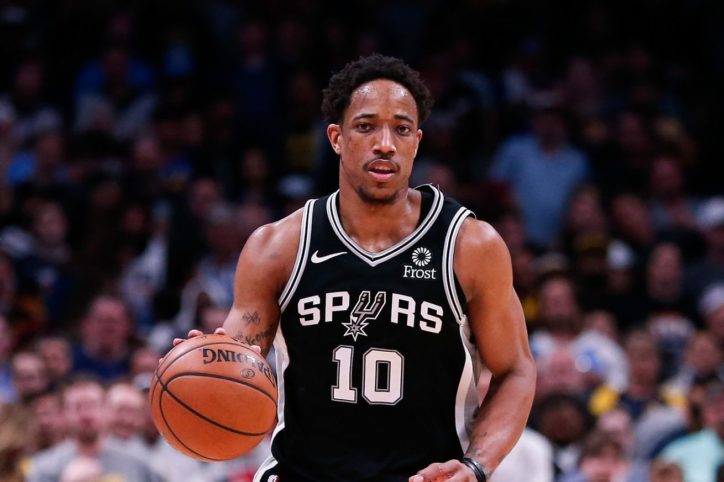 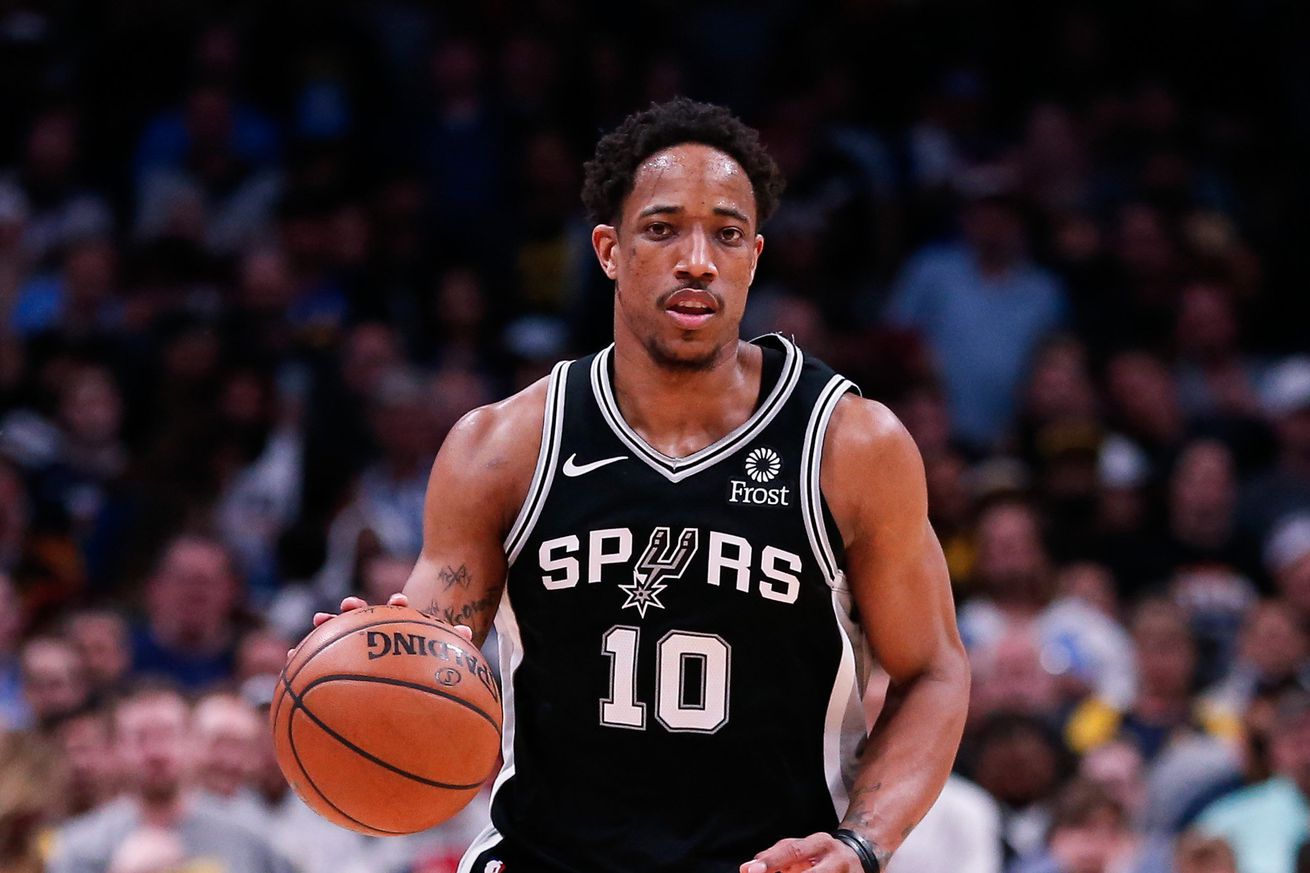 If the Spurs wish to add Bojan Bogdanovic, or any other mid-tier player this offseason, they have options.

A couple days ago, ESPN’s Bobby Marks reported that Bojan Bogdanovic could be a free agent target of the San Antonio Spurs. The amount of his next contract is anybody’s guess, but it’s expected to be anywhere between $15-20 million a year. The Spurs will be going into free agency without much room to operate, so moves will need to be made to make space for his contract. In his report, Marks speculated that the Spurs could trade DeRozan to a team with cap space in order to make room for Bogdanovic’s contract. That’s certainly a possibility, but the Spurs have options other than blowing up the team. Note that this article uses Bogdanovic as an example since he’s the player the Spurs are rumored to be interested in, but the same options are available to the Spurs for any mid tier player in Bogdanovic’s price range.

The Spurs are currently at $123 million in salary, $14 million over the salary cap of $109 million. That number includes all guaranteed salaries, dead money from Pau Gasol, and free agent cap holds.

Renouncing Dante Cunningham, Quincy Pondexter, and Donatas Motiejunas is a no brainer and would remove $6 million in salary. Spreading Gasol’s dead money over three seasons would save the Spurs an additional $3.5 million in salary. Those two options alone would bring the Spurs’ salary down to $113.5 million, $4.5 million over the salary cap. Those are the easiest ways the Spurs can reduce their overall salary. The rest of the options are a bit more complicated.

Removing DeRozan’s $27 million salary would certainly do the trick, but replacing DeRozan with Bogdanovic is a step in the wrong direction in terms of competing for a championship. If the Spurs really are high on signing Bogdanovic, their goal should be to try and pair him with DeRozan. Neither are particularly good on defense but their offensive skillsets compliment each other very well.

The Spurs have a lot of guards vying for minutes next season. If the Spurs do pair Bogdanovic with DeRozan, DeRozan would likely slide back into his natural position as a shooting guard, clogging up the guard position even more. At that point the Spurs should look to trade Patty Mills to a team with cap space. Mills is still an excellent spot up shooter, but with two years left on his contract at an average of $13 million a year, the Spurs would almost certainly have to attach a draft pick to his contract in order to move him. This isn’t all that different than what the Brooklyn Nets just did in moving Allen Crabby’s contract. I think this year’s 29th pick would do the trick. Removing Mills’ $12.5 million and the $2 million that would have gone to the 29th pick would reduce the Spurs’ salary to $99 million.

From this point the Spurs have two options. The first is to renounce the rights to Rudy Gay. This would remove his $13 million cap hold but would also guarantee he is no longer on the Spurs’ roster next season. If the Spurs chose this route, the Spurs would drop to 11 players on the roster. If a team has less than 12 players on the roster, an incomplete roster charge cap hold is added for each player under 12 (e.g. a team with 10 players on the roster would have two incomplete roster charge cap holds). The cap hold is equal to the NBA rookie minimum, which will be $900 thousand next season. All this means is that the overall cap savings will be closer to $12 million instead of $13 million. Nonetheless, this would put the Spurs’ salary at $87 million, opening up enough space to sign Bogdanovic.

If the Spurs are going after Bogdanovic, that means they are in win now mode. To me, that means retaining the services of Gay. If Gay is willing to sign for less than his cap hold of $13 million then it would be in the Spurs’ best interest to sign him right away. The Spurs would almost certainly have to sign him for more than the mid-level exception that could be offered by many of the contenders. The mid-level exception is $9.2 million, so maybe a 3 year/$36 million dollar deal would be sufficient. In this case, his salary would start somewhere around $11 million next season. Assuming That is the case, the Spurs would reduce their salary from $99 million to $97 million.

The final step would be trading away one of Marco Belinelli or Davis Bertans. Both are on reasonable expiring contracts that shouldn’t be too difficult to move. Maybe Belinelli could be added to the Mills trade or Bertans could be traded to a team like the Atlanta Hawks or the Philadelphia 76ers for one of their ample picks in the early second round. The number of options here are too numerous to list, but whichever option is chosen, the Spurs would save anywhere between $5-6 million in salary — their salary minus the $900 thousand cap hold for having less than 12 players on the roster. That would put the Spurs’ salary at $92-93 million, giving the Spurs $16-17 million in cap space. This should be right in the sweet spot of where Bogdanovic’s salary should land. A team may overpay him, but if not, the Spurs will be able to put together a competitive offer. Bogdanovic is elite at what he does, but he’s still too one-dimensional for the Spurs to offer any more than a contract in that range.

When the dust settles, the Spurs would be left with a likely starting lineup of LaMarcus Aldridge, Bogdanovic, DeRozan, Dejounte Murray, and Jakob Poeltl/Gay with Derrick White, Bryn Forbes, Lonnie Walker IV, Gay/Poeltl, and Bertans/Belinelli in the second unit. Chimezie Metu, the Spurs’ 19th draft pick, any picks that may be acquired in the trades listed above, along with any player signed using the room exception of $4.2 million or the veteran minimum would be used to fill out the rest of the roster. That’s a strong team that could make a deep playoff run depending on how free agency shakes out this summer.

The Spurs would also be nowhere near the luxury tax line, giving them enough flexibility next summer to re-sign whichever combination of Murray, Forbes, Bertans, and Poeltl they choose. I don’t know if Bogdanovic is the direction I would go if I were inside the Spurs’ front office, but pairing him with DeRozan is far more palatable than replacing DeRozan.

How the Spurs could create cap space without trading DeRozan
Source: Pounding The Rock