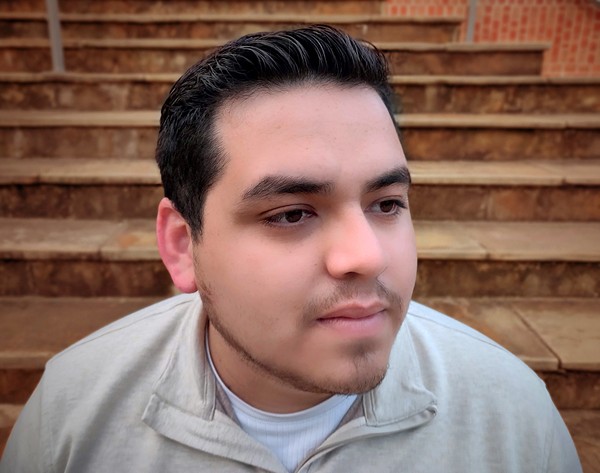 When Norberto “Geremy” Landin appears on my computer screen, I compliment his guayabera with its two vertical rows of sewn pleats running along the front.

“Oh, thank you,” he replies from his West Side home. “I’m infamous for wearing a ton of guayaberas.”

Landin, who turns 25 on New Year’s Eve, is running for the District 5 seat on San Antonio City Council, which has been held by business owner Shirley Gonzales for nearly eight years. Election Day is May 1, six candidates have already tossed their name in the hat.

Landin’s splashy December 5 announcement at West Side bar Jaime’s Place — masked Mariachi singers and all — set a high bar. Leaving nothing to chance, he even hired veteran Democratic political strategist Laura Barbarena to aid his campaign.

As our conversation unfolds, I learn that Landin’s affinity for classic San Antonio hardly ends with his choice of shirts.

“I sing boleros and rancheras,” he adds with an easy nod. A framed picture of Mexican singer Azul Barrientos hangs on the wall behind him.

Before announcing his first-time candidacy, Landin reached out to former District 4 Councilman Rey Saldaña for advice, wondering whether his age would present a problem.

Saldaña explained that people won’t be think about his age, unless he chooses to make it an issue.

“They’re thinking about ‘Can you bring our community hope? Can you give us something to look forward to? Can you talk to us and not be condescending towards us?”’ Landin says, replaying the conversation. “I think that may have been some of the most solid advice I have received.”

To Saldana’s point, two-term D5 Councilmember David Medina, unseated by Gonzales in 2013, was 23 when he was first elected, making him the youngest council member in city history.

Every time someone asks Landin why he’s running for council, he responds differently, although he says the core message remains the same: “It’s because we are a community of consistent hope and resiliency.”

I ask him to elaborate.

“Well, during the pandemic, I continued seeing that people were losing jobs, they were unable to have access to certain health care needs, to resources and testing, but they stayed strong. They stayed active,” he said. “They continued looking for work or they continued working. It was our neighbors in this district and others where there’s a high capacity of essential workers who were making it possible for people to get up and go to H-E-B if they needed to go grab groceries.”

When it comes to the district’s challenges, Landin can speak from his own experience. He was homeless from his sophomore to senior years of high school. Even so, that didn’t prevent him from graduating from Fox Tech and, later, St. Mary’s University. To make ends meet while in school, he worked at Olive Garden, took event photographs for the Current, served as an election judge for the Bexar County Elections Department and sold newspapers for the Express-News — all at the same time.

“That’s what a lot of our community does,” he says with a shrug. “We are a community of hope and dreams — and dreamers. No pun intended.”

After college, Landin briefly worked for Pre-K 4 SA, then became the director of marketing at the Hispanic Chamber of Commerce. At present, he’s vice president of operations and business development at STAAMP Allergy, a clinic specializing in allergy, asthma and immunology. Soon, his office is expected to begin dispersing COVID-19 vaccines.

When it comes to the pandemic, Landin says residents of his district are often unaware of testing and resources because of language barriers or lack of Internet access. He wants to see a major testing site in District 5, which has the city’s highest rate of uninsured people.

“My plan is to focus more heavily on getting those resources acknowledged to our community,” he says.

When I ask him to explain his plan for workforce recovery, he expresses his reservations with the city’s existing program.

“[For] many people, it’s not that they didn’t go to college because they didn’t have access to it, it’s that they didn’t want to. Not everyone’s meant to be in college, and this workforce development plan, it’s not meant for everyone,” he says. “I think what we need to focus on is getting more direct assistance out to the communities and educating the community to know that these resources, like rental assistance, are even available. If they don’t know and they don’t use them, [officials say], ‘Oh, we still have two million in the bucket that hasn’t been used.’ Well, yeah, because the community where you’re sending these English pamphlets to [can’t read] English and they throw it away.”

I ask him what the older generation may not understand about helping the city forge ahead.

“One is this broader understanding of technology and why we need it so badly and understanding why technology is changing us,” he says. “The digital divide in this community is extremely high.”

What’s the best advice you’ve ever received? I ask.

“My Tia Geno said you always have to keep two things with you at all times: Tabasco and duct tape. That actually saves your life in many cases.” He pauses. “Now together, I can see why you’d make that face, but as separate entities they’re pretty helpful to have around.”

I ask what he’s learned from the pandemic.

“That we are in a changing time,” he says. “It’s also taught me that there’s no better time than now.”