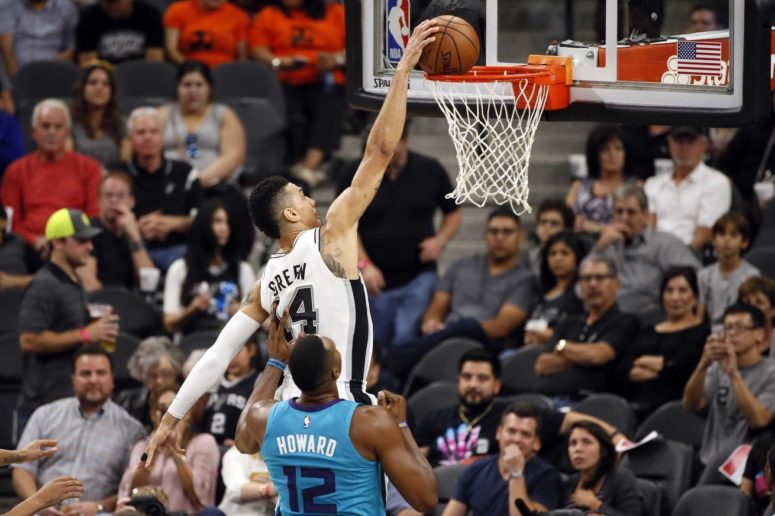 The Spurs face the Hornets as they bounce back from an ugly loss in the Big Easy.

Charlotte native Anthony Hamilton will tell you that for the Hornets…

But thangs ain’t always rough in Charlotte. Although the Hornets are currently below .500, they are looking strong with a 7-2 record at the Spectrum Center where they’ve won their last three at home against Minnesota, the Clippers, and an overtime upset against the Southeast Division rival Washington Wizards.

Meanwhile, the Spurs are coming off a beating at the hands of Boogie and The Brow. Not much to be said there except that tonight’s game plays to the Spurs favor. After two days off since playing in New Orleans, the Spurs are hopefully fully digested, rested, and ready to hit the hardwood in style. By contrast, Steve Clifford and company are returning from Cleveland for the SEGABABA. Spurs fans rejoice in the hopeful exhaustion after playing LeBron James in a down-to-the-wire loss.

To be, rather than to seem

Kemba Walker is averaging 23 points per game with 6.2 rebounds. He’s quick, agile, and his three stints as a dancer on Showtime at The Apollo are bound to keep Patty Mills and Dejounte Murray on their toes. Now in his seventh season, Walker has only worn the Charlotte uniform. His loyalty to the team through many configurations has reaped benefits and is beginning to see some light. If he maintains his current numbers, he’ll end the season with highs in all percentages as well as points per game. He leads a team that has slowly taken shape and added pieces necessary to complete.

A great piece by Jonathan DeLong outlines how General Manager Richard Cho has morphed the trade into an art form, pulling in Dwight Howard for Marco Belinelli and Miles Plumlee. While Howard’s free-throw percentage can be a liability, he has yet to average less than a double-double in points and rebounding throughout his career. His consistency on the boards (currently 4th in the NBA) makes him an offensive and defensive threat. Hopefully, Pop will send Joffrey Lauvergne in to better match Howard’s physicality while having stints where LaMarcus Aldridge and Pau Gasol exploit the Hornets’ big man by stretching the floor. Add to that recent trade history bringing Nicolas Batum in exchange for Noah Vonleh and Gerald Henderson as well as the acquisition of Jeremy Lamb from the OKC for Luke Ridnour, and you could say that Charlotte is to trade, what San Antonio is to overseas draft-and-stash.

Kawhi has zero minutes and more headlines than any other Spur

The constant “when is he coming back?” conversation continues to loom, but perhaps the better question would be “how much havoc will a healthy, rested Kawhi Leonard wreak on a mid-season NBA?” Honestly, I don’t want to see Kawhi until he is 100%. Does anyone else remember the 19-game winning streak that accompanied his return after the fracture of the fourth metacarpal in his right hand in 2014? I think we can all agree that season worked out pretty well for Leonard in the end.

I’m not suggesting the Shaq method of having surgery at the beginning of the season so as to enjoy the offseason and play less during the regular season, but caution is the best approach. Additionally, as rough-and-tumble as the healthy Spurs are, the season is progressing steadily. From LaMarcus’ consistency as the focus of the offense to the emergence of Kyle Anderson, Danny Green’s turn toward leadership to the immediate impact of Rudy Gay, Gasol’s 3-point accuracy to Brandon Paul’s diamond-in-the-rough 3-and-D upside, the Spurs are coming along.

Although total dominance is what all Spurs fans have come to expect, I still think when Tony Parker and Kawhi Leonard are integrated with the production coming from the current healthy roster, the Spurs will be a force. Beyond that, history and reason tell us Gregg Popovich is not going to take any chances that could shorten the careers of his players. He pulled Duncan against the player’s will from the 2000 playoffs to avoid risking further damage to his torn lateral meniscus in his left knee. As long as there is no clarity on the Klaw’s condition, expect to see him in a sport coat.

Speaking of the production of the presently suited up Spurs, Bryn Forbes scored 22 the last time these two teams met. What can appear to the casual observer as a flash in the pan is often the spark that lights the fuse. Forbes is developing quite well: the way he finds the open space for a confident 3, his ability to run off the line and produce a floater, and his chemistry with the Spurs overall have led to more minutes and usage in a time without Parker.

For forward-thinking Spurs fans, Parker’s time as a starter is limited, not just by injury but by time. He will probably see a more diminished role if he continues next season. Does that mean Patty Mills will become the Spurs full-time starter? If so, then Forbes is an option to take Patty’s role coming off the bench. Either way, more Forbes is not hurting the Spurs this season.

Last time the Spurs played the Hornets: Spurs won by 7.

For the Hornets fan’s perspective, visit At the Hive.