You don’t need me telling you how 2020 was a challenging year, but for dedicated Super Mario fans there were small comforts to be found. After months of rumours, Nintendo celebrated the series’ 35th anniversary in dramatic fashion and this brought about no end of content. Before that, even, Super Mario Maker 2 got a huge update in April that added a World Maker, and 3D All-Stars brought us 64, Sunshine and Galaxy onto the Switch in a singular package. Heck, we even got a battle royale game in Super Mario Bros. 35 for some reason, and that doesn’t even account for the spin-offs games.

Even if the last two games are supposedly only available until March 31st — a fact that’s caused no end of controversy — the celebrations aren’t yet over. Whilst fans have continued to ponder Galaxy 2’s exclusion from 3D All-Stars (something we’ve got a few theories on), Super Mario 3D World + Bowser’s Fury is releasing on Switch next month, joining that ever-expanding line-up of Wii U ports. Amidst these anniversary plans, most 3D entries are getting some renewed love from Nintendo, but 3D World’s predecessor has been left in the dark a little, and it scored relatively low in our poll of which remasters you’d like to see on Switch in June last year. For many players, it seems, it barely registered.

For those who might not keep up with every instalment in the plumber’s canon, that game was Super Mario 3D Land, a curious entry in Super Mario’s history which launched on 3DS back in 2011. Taking its name from the Super Mario Land sub-series, 3D Land became the first original 3D Super Mario game for a handheld console (excluding 64’s DS remake), retaining the basic gameplay with a classical twist.

Alongside Galaxy 2, it’s also one of the last 3D entries not to make it to Switch so far. Sure, 3D Land received mention during the 35th Anniversary montage, which is more than our spacefaring sequel got, but this exclusion garnered far less attention from devoted fans. We’d argue this is a game worth revisiting on Switch as quite simply, it’s one of a kind.

Like many platforming mascots in the ’90s, Mario made the transition from 2D to 3D gameplay and Super Mario 64 remains an iconic game to this day, laying out the groundwork for future entries. Launched in 1996, the series didn’t return to its 2D roots for another decade until New Super Mario Bros released on DS. Since then, we’ve witnessed a variety of 2D/3D entries that run parallel to each other. 3D Land lies somewhere in between and Shigeru Miyamoto summed it up best: it’s a “3D Mario that plays like a 2D Mario game” and that much is evident as soon as you dive in.

Shigeru Miyamoto summed it up best: it’s a “3D Mario that plays like a 2D Mario game” and that much is evident as soon as you dive in.

3D Land’s basic plot doesn’t tread too far from the beaten path. Quite literally beginning on a dark and stormy night, we find a storm raging near Peach’s Castle, one that blows all the Super Leaves off the nearby Tail Tree into the distance. Discovering this the next morning, Mario soon receives a flying letter that shows Princess Peach has once again been kidnapped by Bowser and adding to it, he’s stolen the Super Leaves too. Supplying them to his minions to give them Tanooki powers, it was down to us to stop him once more.

Featuring eight new worlds, 3D Land took numerous cues from the 8-bit entries, specifically Super Mario Bros. 3, and that went beyond the return of Tanooki Mario. Boss fights capped each world, some of which took us to Bowser’s castle and in similar fashion to Super Mario Bros., required hitting a switch that threw him into the lava beneath. Others took us back to the old airship setting and whilst you won’t find any Koopalings here, these were occupied by Bowser’s loyal minion Boom Boom, alongside his new female equivalent Pom Pom.

It wasn’t too challenging and can be completed fairly quickly but beating the game unlocked bonus worlds with increased difficulty. Timed stages were also brought back, something 3D entries had ditched, and the iconic flagpole was once again waiting for us. Though 3D Land leaned into those early entries considerably, it represented elements from each Super Mario game and, in some respects, came across like a “Best of Mario” game.

Despite this, it still felt fresh and we thought it made for an excellent game, albeit one that plays things a little safe. With a name like ‘3D Land’, you won’t be surprised to hear that it made use of the console’s 3D effect too, though some puzzles felt rather gimmicky as a result, an issue which numerous critics took aim at. Having recently replayed it, we’d say that criticism still holds up but there remains a lot to love about 3D Land. 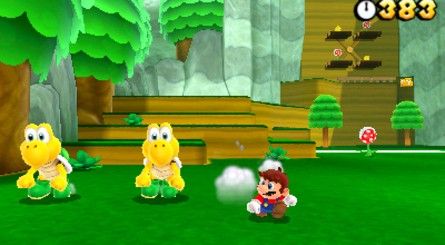 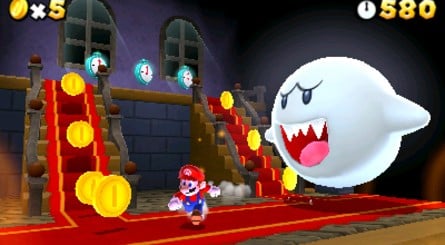 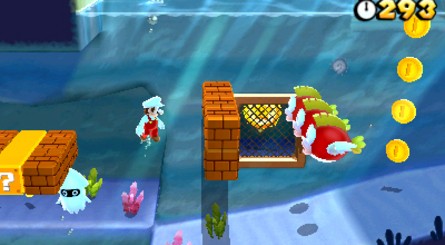 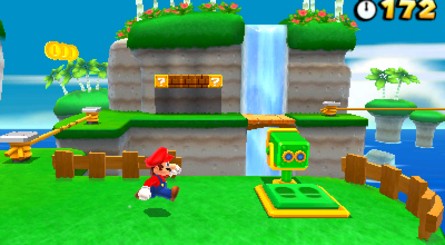 It set out a formula which Super Mario 3D World successfully built upon back in 2013 on Wii U. Working as a direct, expanded sequel, it sought to further unify fans of both 2D and 3D titles and offered more than an HD coat of paint. Carrying over numerous elements of 3D Land like the Super Leaves, returning enemies and even a remixed soundtrack, 3D World took on a life of its own. With a greater focus on Cat abilities than your Tanooki powers, it featured a fully co-operative local multiplayer for four players, an area which previous games offered minimal support for. With the Switch port adding online multiplayer and improved performance, this premise is receiving greater refinement and we’ve got plenty to look forward to in a few weeks from now.

Considering how much love Super Mario got on Switch last year, there’s never been a better time to bring back 3D Land. Sure, there’s a few gameplay elements that’d need reworking but if Nintendo could pull it off with Galaxy, they could do so again here. It isn’t perfect by any means, but it remains a near-unique experience in Mario’s history, one which feels significantly underappreciated compared to its peers. This is one adventure that deserves a second chance in the spotlight.