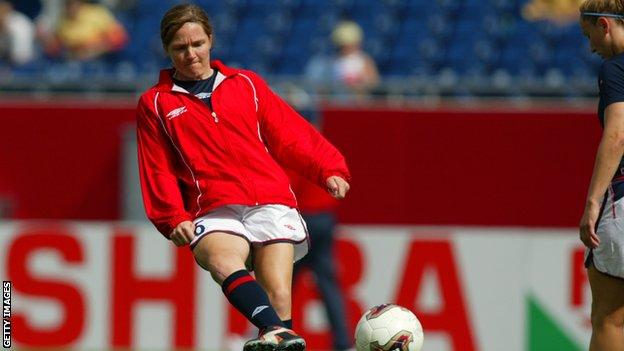 Riise will take charge of the Lionesses’ training camp in February, with ex-Canada international Rhian Wilkinson appointed in a support role.

A decision on who leads further camps will then be made before Netherlands boss Sarina Wiegman takes over permanently in September.

“I look forward to working with [them] and I am confident of making a positive impact when I meet up with the squad in February.”

Riise won 188 Norway caps and is viewed as one of the best players of her era.

The former midfielder, who won the 1993 European Championship, the World Cup in 1995 and Olympic gold in 2000, has a contract until August, as does Wilkinson.

The Football Association said both she and Wilkinson, 38, had agreed “short-term contracts having applied for the assistant coach role made vacant by Rehanne Skinner’s move to Tottenham Hotspur last November”.

FA director of women’s football, Baroness Sue Campbell, said the pair bring “significant international experience” and added an assessment of the next move for the Lionesses will be made “once February is complete”.

After retiring as a player, Riise moved into club management in Norway and also coached the country’s under-23 side before spending three years as USA assistant manager from 2009.

She then joined Norwegian club LSK Kvinner in 2012 – becoming head coach in 2017 – as they won six successive titles between 2014 and 2019, while also reaching the 2018-19 Champions League quarter-finals.

Riise was one of seven nominees for the Fifa best women’s coach award in 2020, which was won by Wiegman in December.

She could also be an option for the Great Britain coaching role at the delayed Tokyo Olympics this summer, with the FA still to make that decision.

Neville stepped down on Tuesday after three years in the role and has taken over at David Beckham’s Major League Soccer side Inter Miami.

England have not played since March 2020 because of the coronavirus pandemic and have no confirmed fixtures.