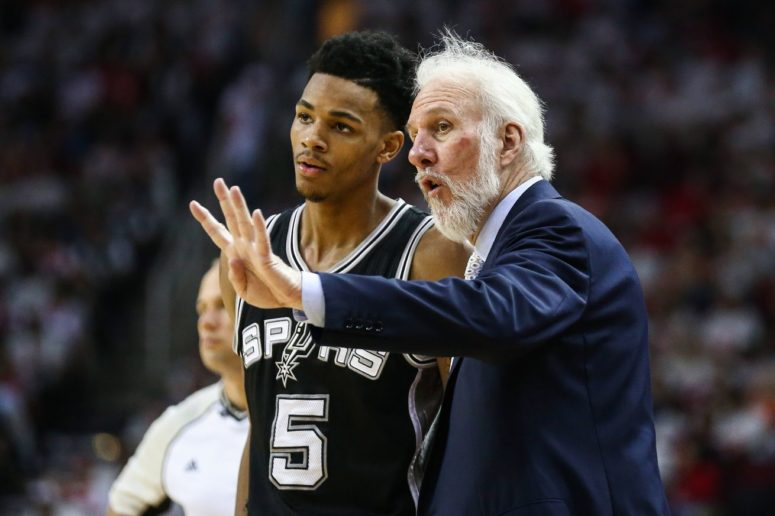 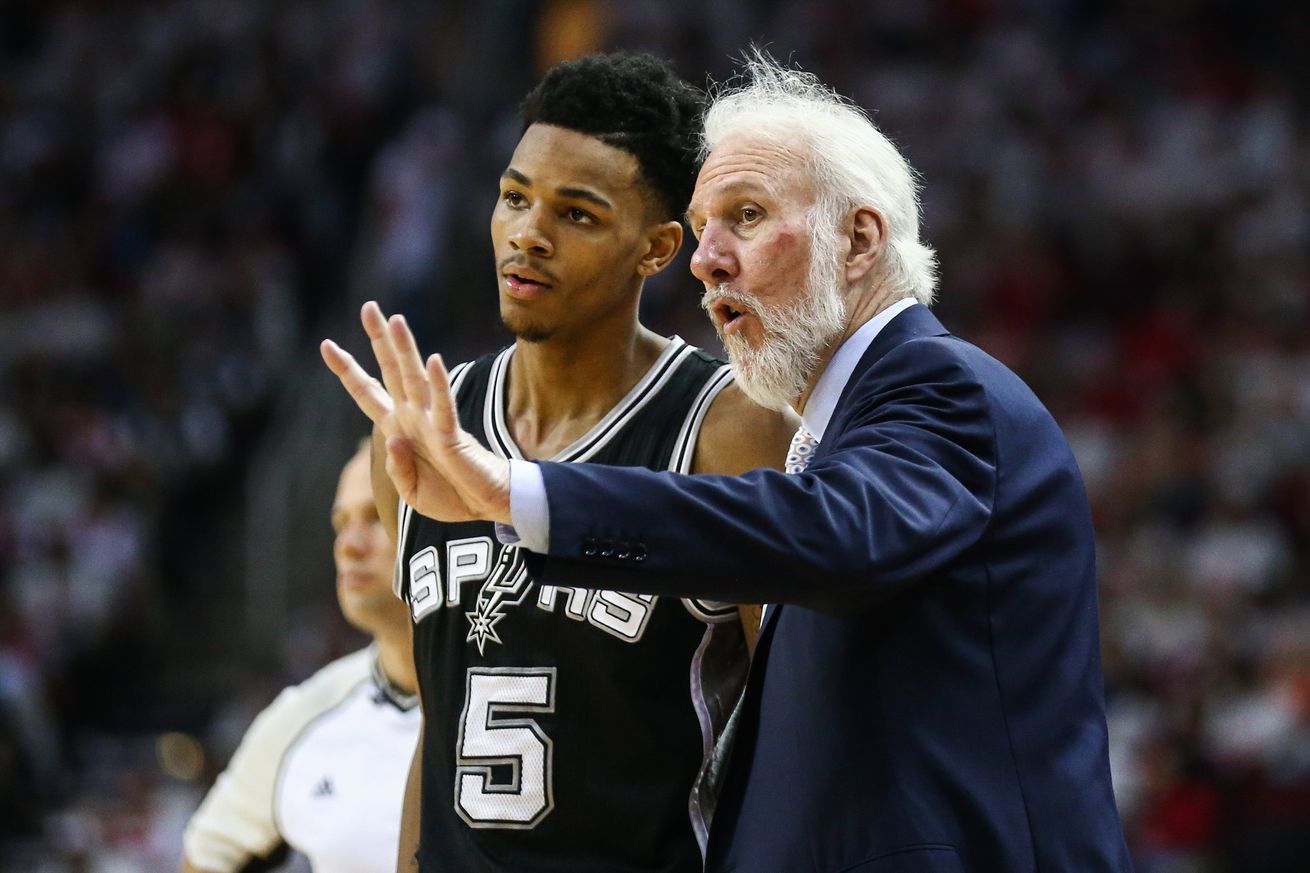 As the athletic guard enters his sophomore season, can Dejounte Murray fill the significant minute gap left behind by Tony Parker?

When Tony Parker collapsed to the floor after rupturing his quadriceps tendon in Game 2 of the Western Conference Semifinals, the Spurs were forced into a difficult situation: should they break-up their frenetic bench unit by starting Patty Mills, or go with the inexperienced 20-year-old Dejounte Murray? They opted for a bit of both, as Murray started Games 3 and 4 of the Rockets series before ceding the role to Mills for the rest of the postseason.

With Parker unlikely to return before January, Pop will again need to determine the better of the two options for at least half the season. The starting job seems to be Murray’s to lose so the Spurs can give their young prospect some much-needed experience as the starters help him out, while maintaining the team’s oomph off the bench. Irrespective of whether Dejounte starts, he will still receive big minutes for the bulk of next season. The question is, can the young guard replace Tony’s production? This is no small feat because, as much as the fanbase may want deny it…

Tony was a key contributor

Let’s get this out of the way at the start: Tony looked downright unplayable at times last year. His season averages of 10.1 ppg and 4.5 apg were in the bottom tier for starting PGs – a far fall from his MVP-contending 2012-13 season, and even his less-than-stellar 2015-16 year. But those stats don’t tell the whole story of his contributions to the team last year.

Tony was the leader that helped his primary (Kawhi) and secondary (Aldridge) options get the ball where they’re most comfortable. There’s no greater evidence of Tony’s impact on the Spurs than Aldridge’s performance in the Warriors series. With the Frenchman off the floor, the guards simply could not feed their forward basic entry passes. It obviously didn’t help that Aldridge was the only offensive option on the floor, but you get the idea; a secondary playmaker cannot dominate when Pau Gasol is unquestionably his best passer.

Parker’s other understated impact was his ability to give Kawhi and Aldridge a rest. In baseball, a starting pitcher who preserves his team’s bullpen by consistently tossing six or seven decent innings for his team is dubbed an “innings-eater.” This also accurately describes Tony’s gameplan last year: run an efficient-enough offense that gets the tertiary options involved to give Kawhi and Aldridge a breather, i.e. be a possessions-eater.

What makes Parker one of the best possession-eaters is that he’s still pretty darn efficient. Tony was in the 78th percentile for pick-and-roll offense, scoring 0.91 points per possession, a number that is better than Westbrook’s 0.89 and comparable to Curry’s 0.92. Better yet, this playtype made up nearly 45% of his offensive possessions, meaning that he runs the pick-and roll a lot with a good success rate. The only starting guards who ran the pick-and-roll as efficiently with as great a frequency as Parker were Reggie Jackson, Kemba Walker and Eric Bledsoe.

All of this is to say that Parker wasn’t as bad as the eye-test might indicate. This could perhaps be disconcerting since Dejounte didn’t look great in the Utah and Las Vegas Summer Leagues, but…

6.0 ppg, 5.5 rpg and 3.8 apg certainly isn’t an overwhelming line. And sure, there was the occasional botched layup or booted ball, but Murray’s Summer League was not as discouraging as his stats may lead you to believe. He generally followed a consistent playbook throughout: pick-and-roll, attack the basket and kick it out to open teammates. He basically said this following after the Summer Spurs’ 81-70 victory over the Celtics.

“[I’m] trying to run the team – pass first and score after that, because that’s pretty much what Coach Pop wants. Me getting other dudes involved, knowing I can score and doing that second.”

Murray’s comments were reminiscent of a Pop quote from the regular season.

“He needs to get repetition on pick and rolls, making decisions on the fast break, that sort of thing. He will still do double duty (in the D-League) in that sense, but I just think his potential is off the charts… We just need to work on his skills and stick with it.”

Re-watching his four summer games, one thing stood out: virtually every halfcourt set involved Murray maneuvering around a screen at the top of the key or the wings and kicking the ball out to an open shooter. [So why did he only have 3.8 apg? Part of the problem was he only averaged 19.3 mpg, and the bigger part was that his teammates couldn’t hit a shot – they made 39% of their field goals overall and 31% from three.]

It feels like Pop is molding Murray into a floor general who takes a back seat to Kawhi and Aldridge, i.e. the role Parker held last year. That’s quite the change from the guy who entered the NBA just last year. Giving Dejounte a chance to test the waters before being dropped into the deep end is the appropriate way to deal with a young guard such as himself. The coaches seem to know what they’re doing with Murray, and they probably do because…

Pop has been here before

Parker has gone on the record many times detailing his rough first season. He was given big minutes from the start, starting 72 games and averaging 29.4 mpg in his first season. That was driven more out of necessity than by anything else – starting point guard Antonio Daniels wouldn’t suffice for a full season.

This time, the Spurs have the luxury of gradually introducing their potential star into the NBA. As Pop noted midseason:

“Dejounte has got a lot more time to ease into this. Tony came and I was giving him the basketball after four games, I believe… It was his ball and he was going to run the team. I didn’t have a whole lot of time to coddle him.”

Pop managed to help the young Frenchman blossom into a six-time all-star, a Finals MVP and a four-time NBA champion while the pressure was on. Dejounte Murray has greater physical tools, more time to develop and a wiser Gregg Popovich. It might take time, but he could be great as early as next season. I can’t wait to see the results.