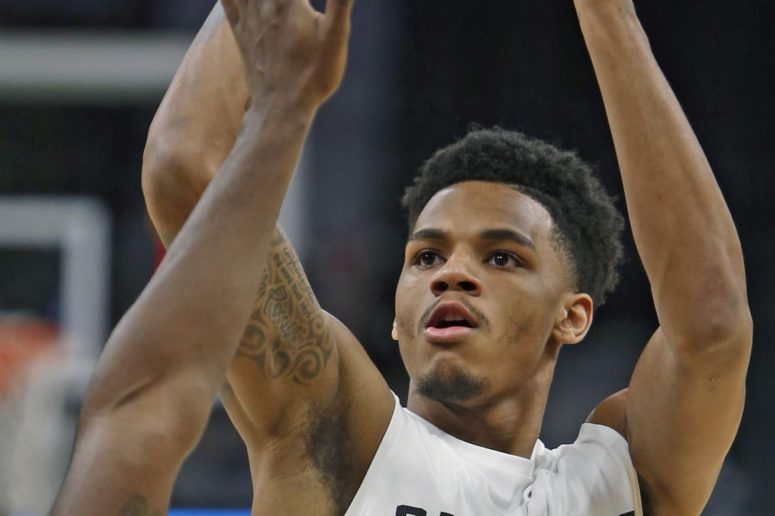 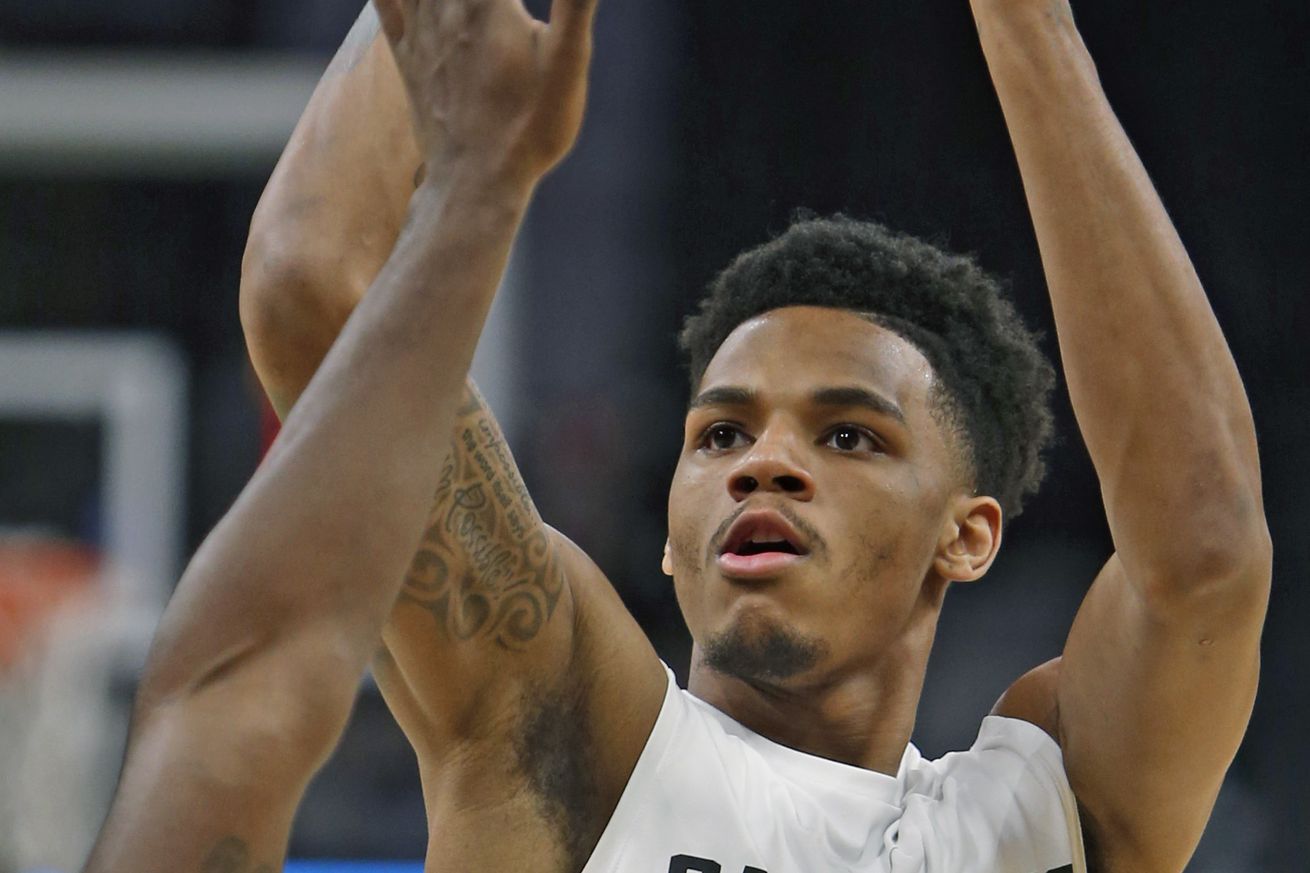 The Spurs have been a true ensemble cast this season, but there’s one player who may be primed to break out.

If this year’s Spurs season was a movie, it would be one made up of character actors owning small scenes only to exit and allow someone else to steal the following frame. A production that’s packed with big names, but fans have no idea how much screen time an actor’s presence on a picture will actually warrant. It has been up to each player to make the most of their opportunity.

Last year, Kawhi Leonard was the singular star of the production. He was like an action hero at the height of their powers whose name on a poster brought ticket sales regardless of who the supporting cast or setting was. You just came to see him dominate weaker, nameless henchman and get his aloof buddies out of pinches. He carried an oftentimes lifeless Spurs bunch throughout the season. That has not been the case this year. If last year was the old cliché of government workers all getting paid to stand around and watch while one worker digs the ditch, this season is a communal farming enterprise. Night after night, different Spurs have shined and taken the focus. Bryn Forbes and Kyle Anderson have won games for the Spurs with big moments. Yes, Manu Ginobili and LaMarcus Aldridge have held the belt after many performances, but it’s been a true group effort.

The drawback to this kind of team is that the Spurs have oftentimes been a mixed bag of attack methods. Because of early season injuries to Kawhi Leonard, Tony Parker and now Kyle Anderson and Danny Green, the Spurs have looked like a different team each night. Though the Spurs continuity and culture has led to the Spurs success this season, a lack of continuity among actual lineups hasn’t allowed the Spurs to hit their stride or “runners high.” Where the Houston Rockets have been rhythmically hammering teams due to their consistent rotation and style, the Spurs have had to find new ways to beat the opposition regardless of who was on the court for either side. The Spurs have shown so far they can beat the best team (The Boston Celtics) with a limited side, but lose to a struggling team like the Mavs even when they’re at full strength.

In the Spurs 109-91 victory against the Junior College Clippers on Monday night, it didn’t matter who was on the court for the opponent, the Spurs just had to find what group or player would steal the scene and grind out another victory. Thankfully, it was young Dejounte Murray grabbing the brass ring. For the second game in a row, Murray has emerged as a player who can actually win games for the Spurs and not just be a fun, young project with upside who Spurs fans can fantasize about his future.

Murray was the first point guard off the bench against the Clippers, finding the court before Patty Mills did. Partly due to the fact that Danny Green was sidelined and Forbes started in Green’s place, leading to Mills sharing minutes at the two and time on the floor with both Parker and Murray. Even still, the move was clearly a sign of Pop’s attempt to try to find more of a place for Murray in the Spurs rotation. Murray was aggressive all night, sometimes to a fault as he continues to struggle with getting too many fouls early on in games. In his first stint, Murray raked in three early fouls and it looked as if the foul trouble would take away his minutes. His youthful over eagerness gains fouls in the same way Kylo Ren’s temper tantrums garner repair bills from the First Order’s Maintenance crew.

When Murray returned in the third quarter, he changed the game for the Spurs. The Clippers had cut a big Spurs lead to two points and the Spurs were in need of offensive competence with Kawhi Leonard done for the night due to his minutes restriction. Murray came on the floor and looked nothing like a second year player as he jolted the Spurs to an 20-6 run. He is proving to be more than a long armed freak athlete with a big smile and he ran the pick and roll with more confidence than he has up to this point in his career. He’s also lowered his dribble considerably, allowing him to use his unicorny length to get to the basket under control in just a few steps.

Murray also looked like a baby Kawhi Leonard as his defensive prowess fueled offensive production. His ability to stay with a play leads to a block and transition break, then he navigated the floor with poise and a found trailing shooter:

He also hit a few jumpers at the nail, which most will agree that is the biggest thing lacking in his game. Luckily Murray has world-class shooting coach Chip Engelland by his side and has shown a commitment to improve his craft. Murray’s jumper still looks awfully slow and elongated, but if he can smooth it out and knock it down at a higher clip, Spurs fans wildest hopes and dreams might be realized.

And here DJ is again with that all-important free throw line jumper. Looks pure to me. #BabyDriver pic.twitter.com/iJjKqByPzg

Dejounte Murray looks to be garnering minutes in his second year that young players don’t often earn under Pop’s governance. Only Tim Duncan, Tony Parker, Manu Ginobili, Kawhi Leonard and George Hill averaged more than 25 minutes a game in the second years on the Spurs. The outlier who averaged more than 20 was DeJuan Blair, but that was more out of the Spurs lacking athleticism and quality bigs at that time. You could argue that Murray’s only gaining 18 minutes per game due to the Spurs malady of injuries this season and that would be half true. Though one only needs to look to Pop’s treatment of Murray and reaction to his young point guard’s relentless tenacity to see Pop’s found another gem. Murray fought Montrezl Harrell for a rebound which led to a jump ball and the not often seen standing ovation from his coach. I’ve probably seen Pop be nice to more reporters asking dumb questions than I have him celebrate young player’s efforts with claps.

The Spurs won a game they should have won and there aren’t some huge meta things to take away from it. Until the Spurs get to play with similar lineups from game to game, they will continue needing someone to step up and steal the scene. There will be nights where Murray falls on his face and looks like a 20 year old as Jesus Gomez pointed out earlier in the season. But, he’s got his hard to please director applauding him behind the camera and that should mean something. Performances like this show us he’s capable of being a leading man someday.

1) Kawhi Leonard looks good considering he has not played basketball in seven months. I came back from a nine day Europe trip last June where I didn’t drive and in my first ride back behind the wheel of my car, I threw the shift into drive instead of reverse and almost crushed my garage door down. It’s unrealistic to think he’d immediately morph into the player who was crushing the Warriors in the first half of the Western Conference Finals. Though the seeds are there. He was really active rebounding in the first quarter against the Clippers. His jumper will come back once he regains lift in his legs as I’ve noticed him short rimming a couple shots. The Spurs have a cast in place that allow Leonard to ease back into superhuman form. Thankfully he doesn’t play on a squad where he’s immediately expected to score 25 a night and ends up re-injuring himself. The Spurs need their best player healthy for the stretch run and the ensemble cast has put itself in beautiful position to make a run when Leonard has his pace, lift and endurance back. He’s making efforts to get teammates involved and might not average 25 this season which will be sad for the inner bucket getter in all of us, but even Tim Duncan’s Spurs weren’t at their best during the peak of #21’s statistical mountain.

Kawhi doesn’t avoid contact here, should’ve been an AND-1. pic.twitter.com/3KXDECnTkM

Kawhi passes out of double and finds Pau in corner (he missed), but still shows awareness from Kawhi and efforts to playmake pic.twitter.com/OhoRTgPVfj

2) Tony Parker’s lift on his legs does seem to be back or as back as they can be for a 35 year old point guard who relies on his legs. He looked incredibly smooth Monday night and hit his patented teardrop and was crafty around the basket. It was also fitting that the most underrated and underappreciated of all Spurs greats passed Kobe Bryant in wins on the night that the Mamba had TWO jerseys retired for the Lakers.

On the night Kobe gets his jerseys retired, Tony Parker passes him for number 8 on the all-time regular season wins list#Ko8e24

3) LaMarcus Aldridge was aggressive and the offense went to him early on in possessions. The Spurs won’t go away from what was successful while LaMarcus was carrying the load with Kawhi sidelined.

4) Is Davis Bertans the new “muscle” on this Spurs squad? He almost got into another altercation Monday night as he and Montrezl Harrell were both issued technical fouls after Harrell complained of Bertans “throwing elbows.” Who would have thought Bertans would be the Spurs enforcer? Watch out Zaza.

5) The Spurs went with part of the lineup I am most excited about for a good stretch in the second quarter. And it went about as terribly as one could have imagined it would. The “Get Buckets” lineup did score, but the baskets came on forced jumpers and their presence together led to a stagnant offensive stretch of the second quarter. I can’t wait to see what a lineup that consists of Kawhi Leonard, Rudy Gay and LaMarcus Aldridge at the 3, 4 and 5 looks like…eventually. But, it can’t look like it did against the Clippers. In four straight possessions, the lineup had one or no passes. My hope for this lineup would be that it would include Tony Parker at the point and not Patty Mills as it did last night. Mills just isn’t capable enough of running the pick and roll to have success with this group on the floor together. I’d also love to see those three scoring machines run the pick and roll or pop together. My ideal Two-Guard in this lineup paired with Parker would be Danny Green. I just hope we see “Get Buckets” crew out there again.

A wish: For this beautiful Manu tour bus to keep on rolling. My senior year of high school, I didn’t go see the Rolling Stones at Zilker Park in Austin because I thought they would be “too old” and washed up. My friends got front row seats and I missed one of the greatest shows I could have ever seen. All I can say is, don’t miss what Manu Ginobili is doing this season. He’s the truth.

Manu and Pau set up the Clippers defense and execute the San Antonio Alley Opp to perfection. #StillManu pic.twitter.com/YHtWuGa8rh

“He changed the game.” – Kawhi on Manu pic.twitter.com/StwRFVkLRD