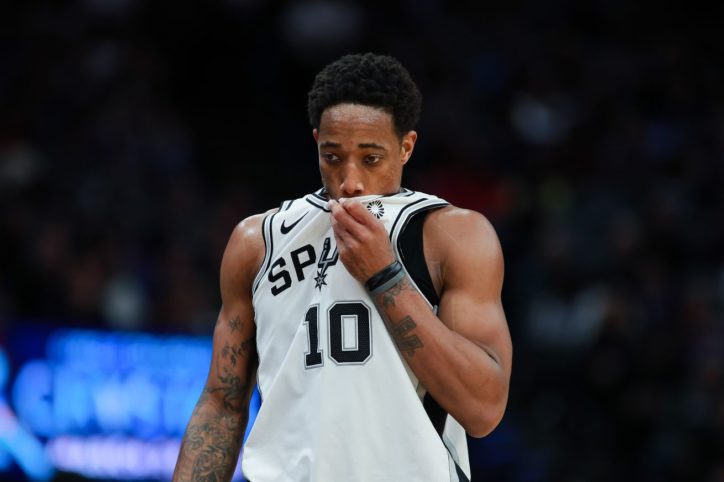 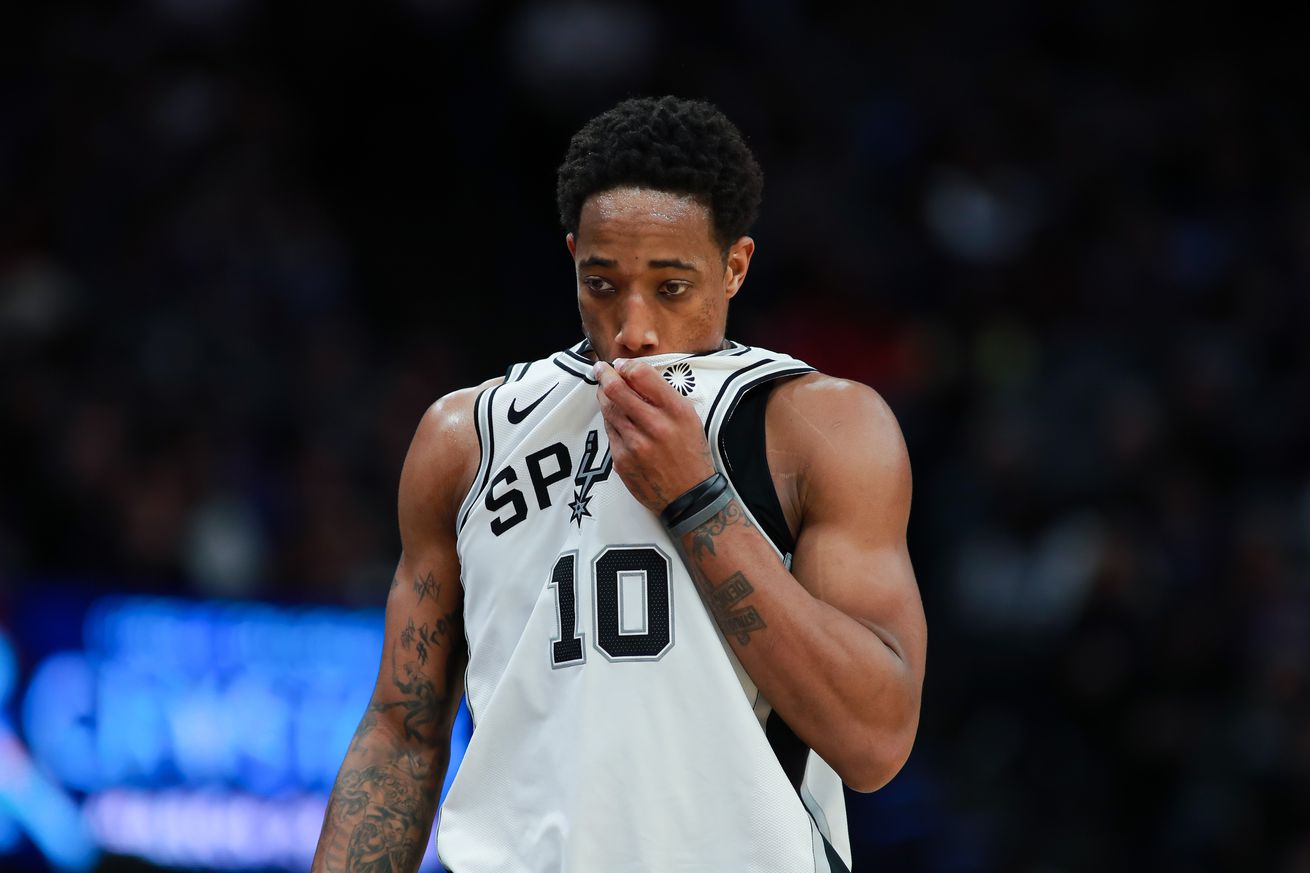 This week’s installment of the staff round-table looks at the Spurs’ All Star choice, and more.

The shorthanded Spurs haven’t had the best start to the Rodeo Road Trip, After sweeping a four-game homestand, they lost to the Kings and Warriors in their first two matches away from the AT&T Center since late January. Pop rested his stars in the second matchup, so the hope now is that the worst is in the past and the road woes won’t continue for long as the team returns to more normal lineups.

While the Spurs try to figure out how to mask Derrick White’s injury without dropping in the standings, the rest of the league is busy with the upcoming trade deadline and All-Star game. PtR contributors Marilyn Dubinski, Mark Barringon, Bruno Pass and Jesus Gomez as well as Editor-in- Chief J.R. Wilco discuss it all, while also taking time to analyze a tweak in the Spurs’ rotation and determine the best bat-catching moment in Spurs’ history.

DeMar DeRozan will miss the All-Star game for the first time since 2015. Snub or the right decision by the coaches?

Marilyn Dubinski: A month or so ago it would have been a definite snub, but apart from the Toronto game he has been underwhelming since the calendar flipped, and momentum heading into vote matters. You just aren’t going to get two All-Stars when you aren’t a first or second seed (with a few exceptions), and if only one Spur had to make it I believe LaMarcus Aldridge is the right call at this point. I’m also all for DeRozan getting some rest and getting his body right no matter how healthy he says he is.

Mark Barrington: As a Spurs fan, I want so say snub, but objectively, it’s fair. He was really good at the start of the season, but he’s trailed off recently, although he’s started to show signs the last few games. There are so many good guards in the Western Conference, I don’t have any real issue with him being left off of the All Star roster this year.

Bruno Passos: It’s the right decision. The Spurs shouldn’t have two players in there, and Aldridge has been the bigger difference-maker over the course of the entire season.

Jesus Gomez: It’s the right decision. If he were still back East he probably would have made it for sure, but the West is just too deep. Him getting into a slump at the worst possible time didn’t help, either. Hopefully he’ll make it back next season.

J.R. Wilco: I think it’s telling how LMA started the year poorly, got into great form and made the ASG. But DmDr had a stellar beginning of the year followed by 3 weeks of stink. Like Marilyn said, momentum going into the vote counts.

Pau Gasol has apparently leapfrogged Jakob Poeltl in the rotation. Do you expect the adjustment to be permanent?

Dubinski: I think Pop is either showcasing Gasol for other teams or giving him one last chance to prove he belongs in the rotation before getting his playoff rotation set after the All-Star break. So far he’s returning mixed results, and without his outside shot falling, he has nothing to fall back on that Poeltl doesn’t already provide at a better rate. If he’s not traded (which I don’t expect to happen), I hope he returns to being a fill-in starter and little else. While his style fits with the bench unit decently thanks to his passing ability, Poeltl is just better at this point.

Barrington: Just because Gasol has come off the bench before Jakob the last couple of games doesn’t mean that the rotations have changed permanently. I think it’s mostly matchup based, and maybe a little motivation for the Austrian big. I really think that Pau will be the third center by playoff time, unless they end up with a really weird playoff matchup.

Passos: I’m inclined to think it was a chance to gauge the market for Gasol (which, to be fair, would be a favor to the team and Pau, who would probably like to be in a position to play more moving forward). My hunch is that Pop moves Poeltl back into that slot after the trade deadline, but we’ll have to see.

Gomez: Who knows. I’ve sort of given up on trying to figure out what Pop is doing with his rotations, since injuries have forced him to experiment so much. I can’t blame him for giving Pau some run while other shot creators have missed time. That being said, I’m praying it’s just a momentary adjustment. As I mentioned earlier I think the Spurs were at their best back in December, when they were playing mostly a tight nine-man rotation in which Poeltl was the backup center, so I’m hoping they go back to it soon. If we are lucky, Jakob’s confidence won’t be totally gone by then.

Wilco: With everything I am, I hope it’s not.

Kristaps Porzingis is now a member of the Dallas Mavericks. Will he turn them into contenders next season, when he’s healthy?

Dubinski: They’re probably still a piece or two away from being true title contenders, especially in the West, but they should definitely be back in the playoff race, possibly vying for a top 4 seed. Luka Doncic already has them back in playoff contention, so the addition of Porzingis should take them to the next level (basically where the Spurs are now), assuming he can stay healthy.

Barrington: Kristaps is an extremely skilled player and has a unique skill set for a big. The big caveat is health, and he’s struggled being able to stay on the court. If he stays healthy, he will turn them into a mid-level playoff team, but they need more than just him and Luka to contend for a title. Maybe if they could add Klay Thompson, they’d be there.

Passos: Next season seems a bit early, but with him healthy (which feels like a big ‘if’ given the history of injuries with players that size) and some flexibility to build around that young duo, they are going to be a tough out on most nights now. I’d give it another year before we start thinking of attaching the contender label to them, though.

Gomez: Maybe? If Porzingis returns to form and Doncic can take care of his turnover issues in his second year in the league, that’s one killer one-two punch. The Mavericks have typically been good at finding cheap veterans that can contribute, too. I doubt they can cobble up a roster that can truly win a championship, but they could win 55+ if everything goes well for them.

J.R. Wilco: Assuming health, Dallas will be formidable. KP is capable from so many places on the court and Doncic makes everyone around him better. That said, I’d be surprised if they do better than the second round. (Does being one of the league’s best 8 teams count as contention?)

Better bat-catching moment: Manu swatting one mid-air or The Coyote, dressed as Batman, diving to the floor to catch one with a net?

Dubinski: Fans will always chant for Manu whenever there’s a bat invasion, so he has that advantage over The Coyote. That being said, The Coyote’s catch took a certain amount of precision and effort that must be appreciated, and honestly it was much more hilarious and re-watchable than Manu’s. Manu was all chill about it and went right back to business; meanwhile The Coyote wasn’t afraid to show off afterwards, and everyone else’s reaction on the floor just added to the moment in a way that Manu was lacking. I still haven’t stopped watching it.

Barrington: Manu slapped that flying mammal out of the air using his bare hands. The feat by the Coyote was impressive, especially considering that there was no way he had a good view of the bat peering through the mouth of the Coyote head, so nailing it on the second try was amazing. But Manu went above and beyond the call of duty by taking care of the bat using only his Argentinian deadly weapons (his bare hands), and the Coyote was only doing his job entertaining the fans at the arena. It was a great job of preparation, too, having the Bat-Suit ready to go when the moment came.

Passos: I’m going to be boring here and go with the more humane choice here, which would appear to be the Coyote’s net catch. Sorry, Manu.

Gomez: The fact that this is even a question is proof that what The Coyote did the other day was extraordinary. That diving catch was phenomenal. But nothing can beat Manu, in the middle of cowering teammates and opponents, locking in on that bad, swatting it and passing it on like it was no big deal.

J.R. Wilco: Manu by a MILE. The Coyote had a net, and Manu was sans équipement. There’s just no comparison. That doesn’t mean it wasn’t impressive to watch a mascot (with limited visibility) snag that flying mammal from the air.