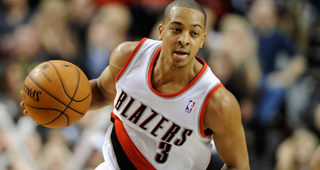 Hours before CJ McCollum fractured his foot, he talked with Michael Pina of Sports Illustrated about the decision he made this offseason to change the way he plays in hopes of extending his career.

McCollum’s three-point rate is 55.0, a whopping 25 points higher than when he was 25 years old.

“I think for the rest of my career I’m gonna shoot a lot of threes and I’m gonna shoot them very accurately,” McCollum said. “I’m also gonna shoot midrange shots, but three points is more than two and if you can shoot them at 44 percent, which is where I’m at, I think you’re in a great spot to get a lot of points per possession and really change how the defense has to guard you.”

The percentage of his shots attempting at the rim was half of what it was last season.

“Why go in there with a 7-footer when I can shoot over a 6′ 3″ guy or a 6′ 4″ guy?” McCollum said. “They want you to play in those spaces. I’ve gotta be very strategic about how I use my body. The ground is undefeated.”