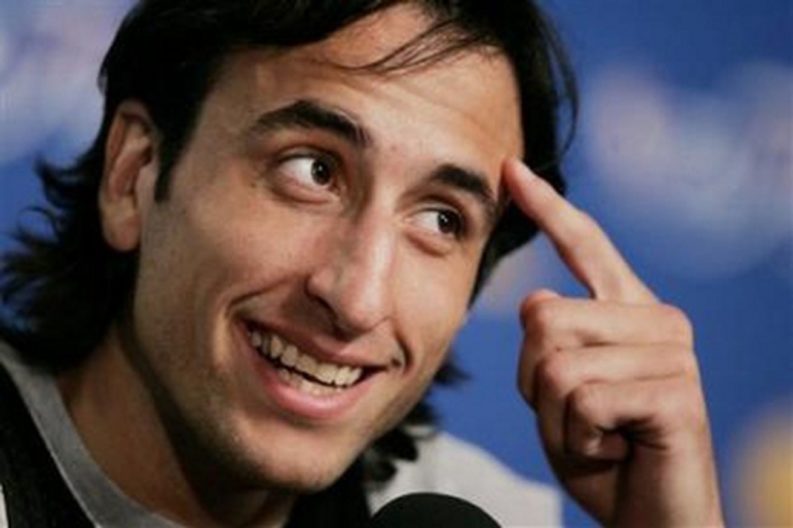 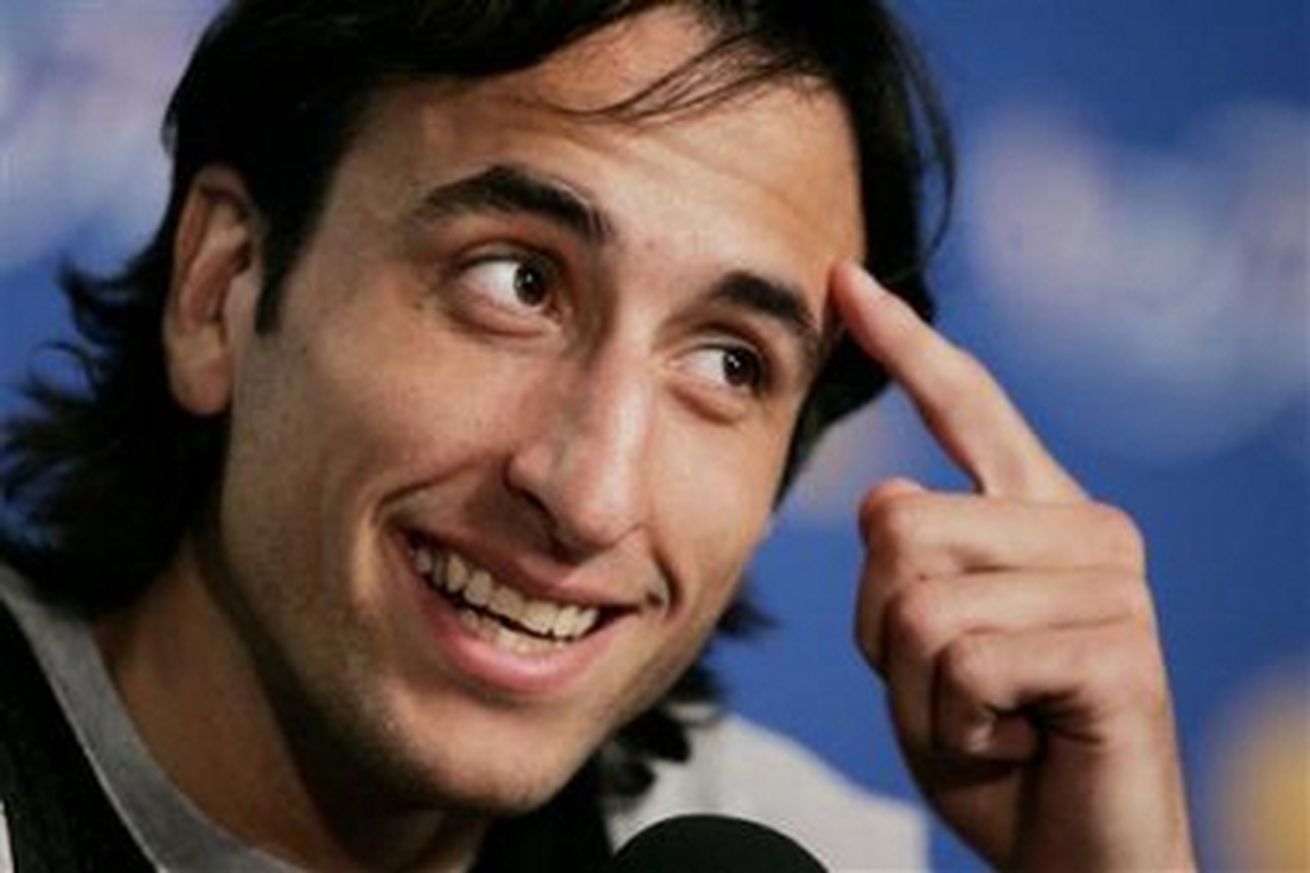 In a different timeline, The Argentine would have made an insanely great quarterback.

Editor’s Note: On the occasion of our favorite player choosing to retire, we can either be maudlin and emotional or we can celebrate his career by having some fun. This is an attempt at the latter. What follows is the account of an imaginary universe in which Manu Ginobili never played in the NBA, and instead became a star quarterback in the National Football League. All quotes are fictional. No journalists were harmed in the making of this fake oral history. If you missed it, here’s part 1. and part 2.]

Part 3: “You wouldn’t believe how many coaches —especially defensive coordinators— stated calling me, out of the blue, ‘Whycheck, this is all your fault you m———f———, you ruined my life!’”
– Frank Wycheck

Manu Ginobili, Saddles Quarterback/Safety: “It sounds ridiculous now, but even when we won the Super Bowl in my rookie year, I didn’t feel that responsible or important to team. I was just a part-time quarterback. Stephen Jackson was starting and I was splitting time with him. And we still mostly kept it simple on offense and let Tim [Duncan] do his thing and destroy people on ‘D.’ Pop let me run around and do my thing here and there but there were a lot of… discussions… too (laughs). It wasn’t until the next year when they didn’t bring Jackson back and named me the starter that I felt a difference and built some confidence and started to feel my teammates trusting me more. The season after that I really started feeling like I belonged and Pop and the coaches started changing the offense for me and I got more attention, I guess.”

Buck Harvey, former San Antonio Express News columnist: “His second season, Jack[son]’s gone and the second game of the year they’re on the road against the Cowboys with Duncan and Parker both out injured and Dallas has Shaq[uille O’Neal] and Kobe [Bryant] in their primes plus Karl Malone and Gary Payton. That’s four all-time great first-ballot Hall-of-Famers. They were favored by two touchdowns. Manu and a bunch of nobodies took ‘em to overtime. He pulled out all the tricks that game. He had a couple of bombs, sure, but he also scrambled for a bunch of first downs and pulled off at least four or five incredible lateral passes that had the Cowboys completely bamboozled. They knocked the crap out of him but Manu just kept coming. It was his real coming out party.”

Brett Brown, Head Coach of the Philadelphia Eagles and former Saddles quarterbacks coach: “If you think about it, the football field is 53 and 1⁄3 yards wide. That is a long distance. How many 50-yard-passes do you see attempted in a game? One, maybe two? Before Manu came along when you saw lateral plays in the league they were typically in desperate, end-of-game situations, with non-quarterbacks attempting them and the defenses by-and-large expecting them. No one was really doing them during the guts of the game, and certainly no one with the arm or the vision or imagination of Manu.”

R.C. Buford, Saddles General Manager: “Obviously it would be an understatement to say it became something of a weapon for us. It went from something where we were just as surprised as everyone else in the stadium to us trying to work with him and incorporate it into or offense and take it into consideration when evaluating our roster in subsequent years.”

Jeff McDonald, Saddles Beat Writer, San Antonio Express News: “The first year he was a starter we kept two running tallies in the press box: One for the number of challenges the opposing coach wasted insisting one of Manu’s 30-yards-across-the-field laterals were an illegal forward pass —they never were— and two for number of times Pop reamed him out on the sidelines when Manu tossed it to the other team trying something crazy. It was almost a relief when he just threw a normal interception from the pocket, like ‘Finally, a conventional turnover like every other quarterback.’”

Mike Monroe, former columnist, San Antonio Express News: “There were definitely growing pains in 2004, with Manu still needing time to come into his own, and I give Pop a lot of credit for being patient with him when almost no other coach in history would’ve been. But give him credit, Pop always sees the big picture, even when he’s [expletive deleted] you on the bench during the games. He saw they were on the verge of something evolutionary.”

Tim Duncan, former Saddles middle linebacker: “The game used to so simple. Run or pass, control field position, control the tempo, get into favorable down-and-distance, let’s make a couple of plays and go home. Then Pop got bored and first I had to deal with French Boy and then came Crazy Boy. I should’ve left to Tampa when I had the chance.”

Gregg Popovich, Head Coach/President of San Antonio Saddles Football: “I wasted a few months trying to change him and then a few more to get to the point where I realized that it was not going to happen. So then you have make a decision: Can you live with the results of who he is as a player or do you have to get him out of here? Well that was a no-brainer. He showed from day one what a competitor he was and we’d have to be idiots to give that up, especially with the way his teammates and even the fans responded to him. So once we as a staff realized we’re not going to change him, we started actually doing our jobs as coaches and tried to understand what he was seeing, why he was doing the things he was doing, and trying to build off of that.”

Ginobili: “Once I started having some success lateraling the ball across the field and us scoring from those plays, everyone kept bring up the Wycheck play to me, the, what was it? Right, ‘The Music City Miracle.’ I probably saw it on the highlights back in Argentina or somewhere and maybe it was osmosis. But I have no idea who Whycheck is and if people want to say he invented the move, that’s great, I don’t care.”

Frank Wycheck, former Tennessee Titans tight end: “Once Ginobili started really taking off and the lateral started to become this regular thing, you wouldn’t believe how many coaches —especially defensive coordinators— have called me, out of the blue, ‘Whycheck, this is all your fault you m———f———, you ruined my life!’ And a bunch of them weren’t joking, either. Hundreds of guys lost their jobs thanks to that guy. Maybe thousands. But I tell everyone to blame Alan Howry; our special teams coach at the time. He was the one who called it.”

Tony Parker, former Saddles running back: “At first I was worried that Pop would never go for it and he’d try to trade Manu. But once I saw that he started to trust him, I knew Manu’s move would work because I grew up playing soccer and it’s the same principle, like with the off-sides rule. You just pass to the open guy and in American football defenses all have the mentality to swarm to the ball. They don’t care about leaving people open after the line [of scrimmage.] Midway through ‘05 Manu had that long hair flowing underneath his helmet and he was playing unbelievable and I knew we were going to win it all.”

Harvey: “The further that season went along, the more and more audacious he got with it. He’d scramble all the way to one sideline and then chuck that thing across the field on a line and there’d be Tony or someone with nothing but grass in front of him. And he kept trying new things. He’d lateral sidearm, or behind his back. He’d underhanded them between people’s legs. He’d fake a lateral, get a defender leaning that way and then spin past him and keep running. It was the classic cliche of taking three years to be an overnight sensation, but by the playoffs that year Manu became a full-fledged rock star. And his personality never changed one bit through it all.”

Mike Budenholzer, Head Coach of the Green Bay Packers and former Saddles Offensive Coordinator: “What makes Manu unique is he has this spacial awareness that is unlike anyone I’ve ever come across. At full speed he is able to process where the other 21 people on the field are and where they’re going, and make decisions based off those things. It’s like he’s playing chess while riding a dirt-bike.”

Popovich: “He has the talent, obviously, and the competitive fiber and the fearlessness and all those other things you can’t teach that makes him special but I truly believe it’s because he didn’t grow up with the game, didn’t care about its mythology or its narratives, that he was able to pioneer a whole new way to play it. He didn’t care that it hadn’t been done before or not been tried at this level in 60 years. His attitude was ‘Why not? It’s not against the rules.’ It was like football through a child’s eyes sort of deal. I banged my head against the wall for a while trying to get him to be Johnny Unitas until he lifted the wool over my eyes so to speak and try to see the game at his level.”

Steve Kerr, Head Coach of the Oakland Raiders, former Saddles wide receiver: “I liken it to that scene in ‘The Matrix’ when first they’re trying to download basic programs for Neo and he just skips past those and then he installs more and more advanced martial arts programs and guns and different kind of weapons training and whatever and he just couldn’t get enough of it and before no time at all he’s kicking Morpheus’ ass. That was Manu. By 2005 it was like the end of the movie and everything had slowed down so much for him that he was changing all the rules of physics and just toying with people.”

Ginobili: “I honestly don’t know why what I do is such a big deal to people or why other people didn’t try it before or whatever. It seems like common sense to me. In basketball when you go to the basket, the defense collapses, you kick it to the open man. It’s not like my arm just magically gets weaker or less accurate when I cross this imaginary line. And the advantage I have is behind the line of scrimmage the defense is trying to cover people, but after I cross it, they’re all coming after me and not caring about them. Behind the line I only have five eligible teammates to pass to. Cross it and all of a sudden I have 10. I tried to get Timmy to explain it to me but he just shakes his head.”

McDonald: “Oh, and we can’t forget the craziest part of all of this. While all of that was going on, he was still also playing on defense.”