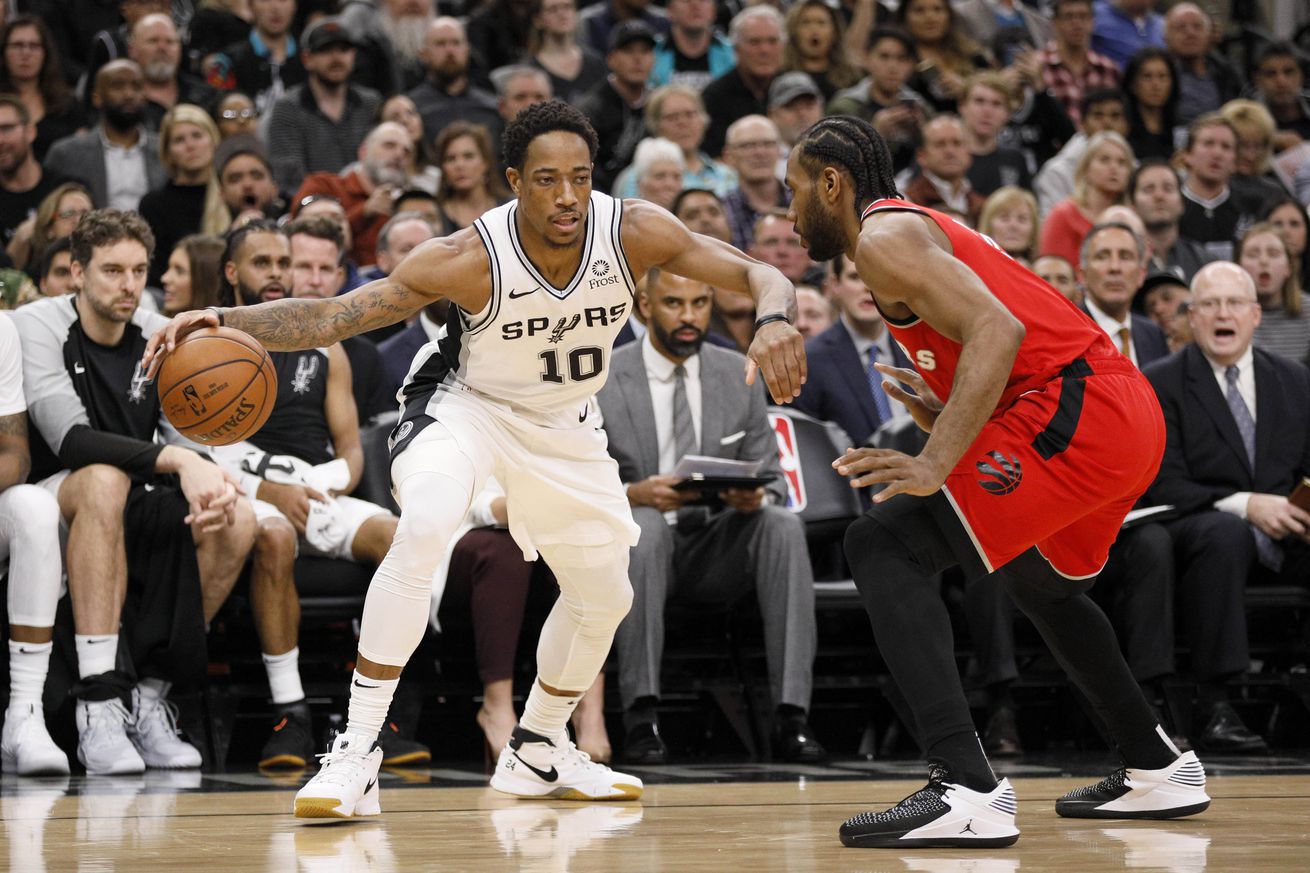 How an offense built around postups and midrange pullups has been elite through the first half of the season.

Individual efficiency is a tricky thing to contextualize. You need to account for play type, opponent, lineup fluctuations, and a dozen other wrinkles that influence how well a team scores when a particular player touches the ball. For hot takes and Twitter spats, it’s easier to revert to shooting metrics like effective field-goal and true-shooting percentage or lean on more nebulous catch-alls to affirm what our eyes and the box scores are telling us, and conversations usually end there.

And yet, it feels like we need to work towards a better-rounded idea of efficiency, if only to make sense of how an elite offense and its mid-range enthusiasts are thriving in the Pace and Space Era. Consider that DeMar DeRozan and LaMarcus Aldridge account for roughly 34 field-goal attempts, or roughly 38.5%, of the team’s total shot attempts, while ranking among the least efficient shooters from the field due to their aversion to the three-point line. DeRozan is last among Spurs rotation players in effective field-goal percentage (48.2%) and Aldridge isn’t far behind (50.9%), both technically dragging down the team’s overall number — 53.5%. (For reference, the lowest effective field goal percentage in the NBA is New York at 48.7%, and 25th ranked Thunder are at 50.5%). Charts like the one below reiterate where they’re both doing their damage from.

Rockets taking over the whole arc.
Spurs and KD in the midrange.
Giannis owns the acropolis. pic.twitter.com/D4HoNC54bz

Of course, shooting efficiency only tells part of the story, lest we conclude that San Antonio is ranked 5th in offensive rating in spite of DeRozan and Aldridge and not because of them. And that’s not the case — both rank in the upper half in offensive rating and play a vital role in anchoring sets, keeping defenses honest, and setting up the Spurs’ many talented shooters.

We’re mostly right about which NBA players are efficient in a general sense, and it should be noted that it takes the Spurs tightening their defense and being elite at a number of peripheral areas (turnover rate and three-point percentage, for example) for the following observations to ring true. But that’s the delicate beauty of it all — a balance that’s allowed them to thrive in their own unique way in a new NBA.

The Spurs’ offensive success has to do with how it uses both All-Star-level players on the floor, as shot creators as much as shooters. Unless your team has James Harden or Steph Curry, three-point looks need to typically be generated through breakdowns, and when the Spurs’ frenetic bench unit isn’t out there, those opportunities often come through penetration and post-ups.

Let’s start with DeRozan, maligned non-taker of three-point shots and one of the more commonly cited examples of inefficiency in the new streamlined NBA. His eFG% puts him in the John Wall-Harrison Barnes-Russell Westbrook tier of scorers while his long-range shooting (17.5% this season on one attempt per game) continues to separate him from nearly every other two-guard in the NBA. That distinction will help him continue to fly below the radar despite being one of just four players in the league averaging at least 22, 6 and 6.

The 6.4 assists per game, good for 18th most in the NBA, are what remain a revelation this season, even to his coach.

“I had no idea he was that good of a passer,” Gregg Popovich said about him last week. “But he’s been one of our better guys in playing downhill and attracting a crowd and finding teammates. I knew he was a scorer. I knew he was a great teammate. But I did not know about the passing.”

DeRozan is the starting lineup’s engine and primary creator, even after Derrick White’s insertion. Live-ball defensive stops and defensive rebounds still typically find their way into DeRozan’s hands for him to push the ball up the floor, and a number of half-court sets are designed to, as Pop alluded to, find him going “downhill.” Beyond his pacing the team in assists, well over 70% of his baskets are unassisted, a statistical area occupied almost exclusively by lead guards.

Everything’s connected when DeRozan puts his head down; many of the same aggressive forays that will lead to pull-ups, drives or fouls (he averages an 11th-best 6.3 free-throw attempts per game) at the basket also lead to open looks for his teammates. The fluid nature of his game means a play that sets up, say, a 40.9% on average baseline jumper can also create a wide open three-pointer for Davis Bertans, who’s not only one of the league’s top shooters but also a guy who doesn’tj regularly create for himself. (Only 4.3% of Bertans’ buckets this year have been unassisted)

As a result of how he probes defenses, DeRozan’s dishes to teammates are often more meaningful than innocuous kickouts. In fact, of any player averaging at least 2 dimes per contest, no one has a pass-to-assist rate as high as DeRozan’s 18.7%, a figure that not only leads the league but is also the highest rate we’ve seen since the NBA started tracking pass data. Earlier in the season this felt anomalous. 40 games in, it likely speaks to the quality of passes he delivers within the flow of the offense.

Aldridge making better use of his gravity

Over the last 10 games, the Spurs’ starting lineup has an offensive rating of 115.9 (and a 13.5 net rating), and a lot of things are breaking right. One of them has been Aldridge’s continued hot shooting going back to Thanksgiving, but he’s also reacting better than ever to the defensive attention he attracts on the block.

Aldridge’s shot chart tilts heavily towards his activity on the left block, a spot that DeRozan also occupies from time to time. Do you know where the Spurs’ best three-point shooting happens? On the right wing and corner. Here’s the type of play that’s becoming increasingly common in San Antonio:

And here’s another one of Aldridge’s season-high 7 assists, again out of a double team pic.twitter.com/dutcBe2Jn9

Aldridge’s assists remain a tick or two above his career average but, at 2.4 per game, they’re the highest they’ve been since arriving in San Antonio, and it certainly looks like the team has found the right inside-out balance that keeps him comfortable while putting the guys on the perimeter in a position to strike. Here’s another of his season-high 7 assists from Saturday’s win over Memphis:

His teammates are making life easier for him, not only by hitting their jumpers but by moving when necessary to prevent their defenders from doubling. Here Gay, not at his more comfortable spot in the corner, makes a timely cut to make Pascal Siakam commit away from sending help.

In instances like this, the Raptors’ defense wins, at least on paper — Aldridge takes the less efficient shot, both because he can and because he has to. The Spurs would probably rather a double come, but not from the direction it was headed. As a result, they take what amounts to a plan B, which just so happens to be a jumper Aldridge has practiced a million times.

This reveals one of the funny truths about the whole exercise: the shots the team’s star players are built to take better than most people in the league aren’t necessarily the first options every time they bring the ball down the floor, although they provide a certain track for possessions to follow. The players press for better looks, breakdowns begin to emerge, or other opportunities present themselves that allow things to progress organically from good to great. If no great shot presents itself — good is a pretty agreeable last resort.