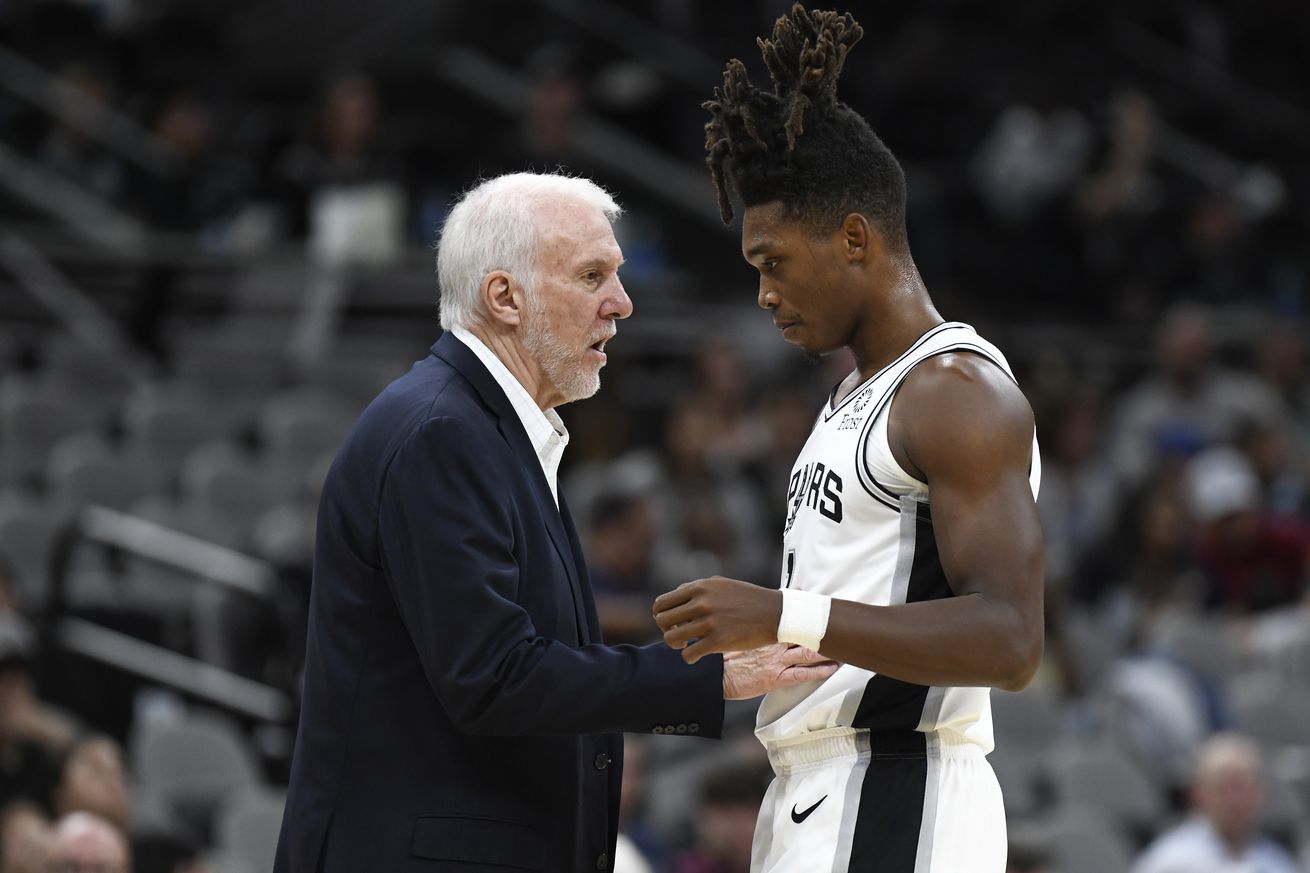 Lonnie isn’t the only one struggled against the Clippers, but he needs to play like he’s fighting for minutes.

When asked about Lonnie Walker IV’s performance in last night’s 103-97 loss to the Clippers, Coach Gregg Popovich said the Spurs second-year guard “played horribly“. It was a heck of a soundbite and one which immediately reverberated around the Twitter-sphere, seemingly drawing attention to the handful of defensive mistakes Lonnie made in his limited playing time.

Coach Popovich went on to add that he expected “better effort, better awareness and a better attempt to take advantage of the minutes that he gets. I thought he was non-competitive.”

There’s another interpretation of his concerns that doesn’t necessarily have to do with defensive discipline, one which better fits the evidence. But first, let’s take a look at those defensive mistakes Lonnie made.

Lonnie played just 5 minutes, which amounted to 13 defensive possessions. The Clippers scored 15 points on those possessions, but that’s much too small a sample size to even consider using makes and misses as a tool to gauge a defenders impact. Looking at the tape, Lonnie made a couple of very good plays, fighting over a pair of screens in one instance, which forced Kawhi Leonard into a turnover, and perfectly tracking Lou Williams on a drive that ended in a badly missed floater.

But he also made some mistakes.

The thing is, only allowing Leonard to drive into the middle of the floor is an especially egregious error. Williams beats great defenders one-on-one all the time because he’s very, very good at scoring the basketball. Everyone gets cheap fouls from time to time, and Lonnie’s late help on Montrezl Harrell has a lot to do with him defending the best basketball player on the floor (and maybe the league). Leaving Leonard alone in the corner isn’t exactly a good basketball play, either.

It doesn’t make a lot of sense to use those mistakes as a reason to skip right past bad and poor, going all the way to horrible in search of the right word to describe Lonnie’s play. Especially given that Lonnie wasn’t alone in making any of those mistakes.

If you really want to see some bad defense, here’s Marco Belinelli handing a out free step through layup.

Here’s Dejounte Murray and Bryn Forbes miscommunicating on a switch, which allows Landry Shamet an open drive to the rim, where he collects a pair of free throws.

And here’s Williams torching Patty Mills on his way in for a layup with late help from DeMar DeRozan.

Finally, here’s the entire defense failing to pick up Leonard in transition.

If Lonnie can’t play because of his miscues, then nobody can play. It’ll just be LaMarcus Aldridge, Rudy Gay, Derrick White, Coach Becky Hammon and Coach Tim Duncan (that’s, um.. not a bad lineup, actually).

Seriously, though, it’s pretty clear that the issue had to extend beyond defensive execution. In Lonnie’s 5 minutes of playing time, he got up just 1 shot (a catch-and-shoot attempt from the corner), produced 1 potential assist (a missed three from the wing), grabbed 2 rebounds and had 1 deflection. What Coach Popovich is saying is that’s not enough. Lonnie’s too talented to be essentially invisible on the floor.

At one point in the preseason, Coach Popovich was caught on camera telling Lonnie to shoot an open look he had passed up. His comments after this game are an extension of that same idea. Lonnie’s too gifted to be so deferential. The Spurs need him to attack. One method of getting him there would be to let him play until he gets comfortable, allowing him to slowly increase his work rate as he settles in.

But that’s not how the Spurs do business. Lonnie will be rewarded for having an impact, and if he disappears again, those little mistakes will get him yanked.

That might not seem fair, given how poorly some of his teammates have defended, but expectations aren’t just about executing Xs and Os. They’re also about using your talent, doing everything you can to help the team, and being fully engaged at all times when you’re on the court. That’s where Lonnie actually fell short.

Once he leans into his abilities and becomes as aggressive on both ends of the floor as he was on defense in the Spurs preseason game against the Rockets, this won’t be an issue anymore. It may seem a little ridiculous to single him out when the players he’s vying for minutes with made were similarly bad, but when the fully-realized version of Lonnie is flying up and down the court, we’ll all look back at these teachable moments and consider how valuable they must have been, just like we did with players like Tony Parker and Danny Green.