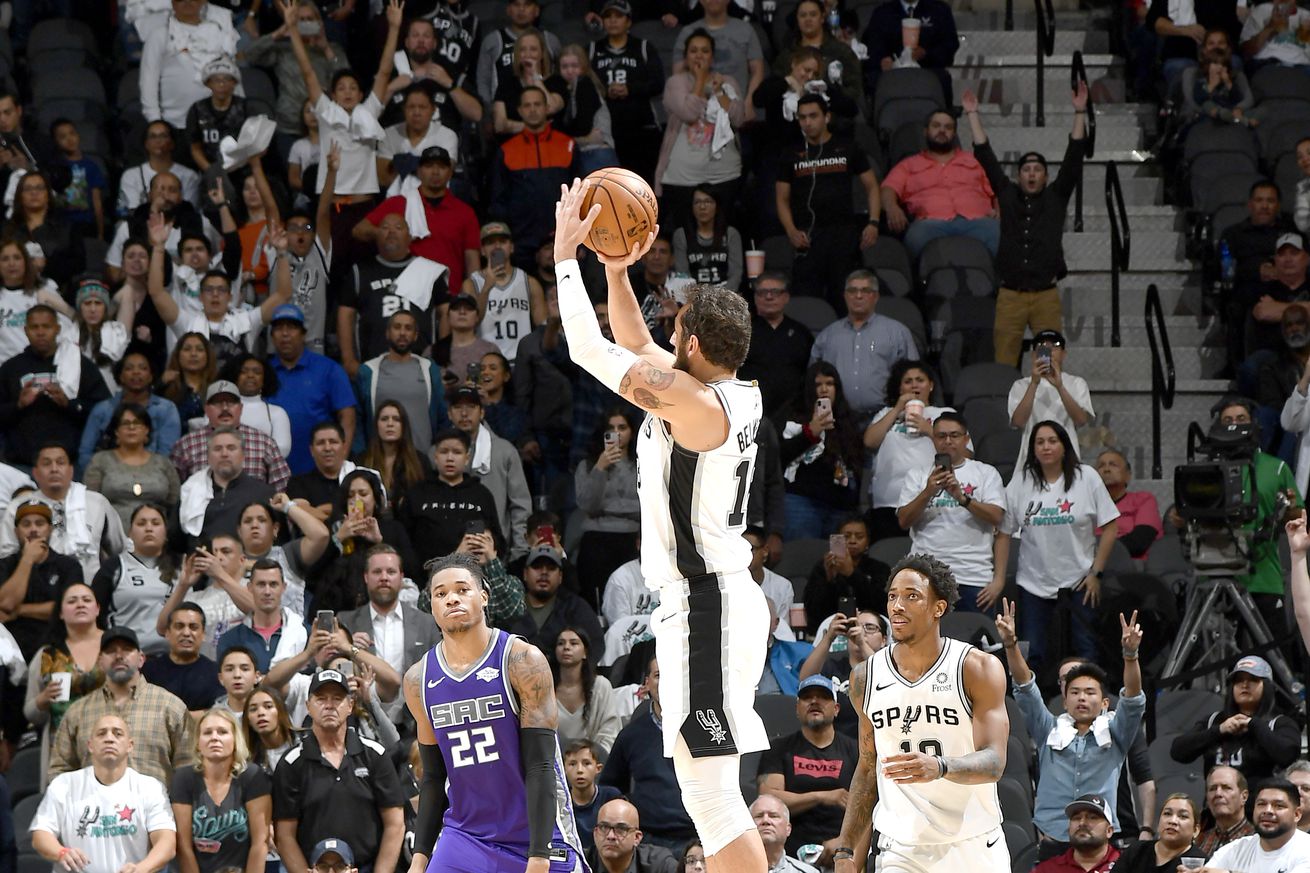 If ever there was a game that neither team deserved to win, the Spurs’ Friday night victory over the Kings was it. With bad basketball being played on both sides, Harrison Barnes was the best player on the court for a long stretch of the night: a sign of just how inept the the Spurs were, especially on offense. It’s only fitting that on that kind of night, the team shanked wide open layups on their best plays and found success drawing up actions that shouldn’t have worked.

After another bucket from Barnes gave the Kings a 2-point lead with a little over 3 minutes to go, the Spurs dialed up their Zipper Backdoor play.

Dejounte Murray brings the ball up the right side of the court with LaMarcus Aldridge running down the the right block while Patty Mills is in the strong side corner. Patty runs under LaMarcus on what looks like a typical zipper cut, and the play looks for a moment like another post up for LaMarcus, but then the big fella spaces out to the three point line to catch the pass.

That triggers a hard fake up the lane and then a backcut from Patty. LaMarcus gets him the ball a moment later than he should so Patty’s right under the basket when he goes up for the layup. It’s not the best angle, but it’s still an open layup. Unfortunately, Patty puts a little too much oomph on it and the ball bounces off the front of the rim.

Patty’s untimely miss was followed by a 7-0 Kings’ run that stretched their lead out to 9 with 1:50 to go, an advantage that should have been nearly as insurmountable as the Rockets’ late lead on Tuesday night. As it turns out, it was. Two free throws, a pair of steals and a putback later, the Spurs had cut the lead to 1 and even managed to cleanly knock the ball loose with less than 15 seconds to go and appeared to have a transition opportunity to take the lead.

The refs, however, whistled the play dead for a foul on Patty. Though it was overturned after Coach Gregg Popovich challenged the call, the ball was still loose when the whistle blew, so the result was a jump ball, which the Spurs lost. Barnes knocked in a pair of free throws to give the Kings a 3 point lead, setting the stage for Marco Belinelli.

Marco takes the inbound pass at the AT&T Center logo before DeMar DeRozan uses a pair of screens to make his way over to the right wing. After setting the first screen, LaMarcus waits for DeMar to make the catch before heading over for an apparent pick and roll. By the time he gets there, 7 valuable seconds have run off the clock.

The Spurs know Trevor Ariza is going to attempt to prevent DeMar from getting back into the middle of the floor, and sure enough, he shifts slightly to DeMar’s left as LaMarcus arrives for the screen. That opens up a drive to his right, toward the baseline, so Richaun Holmes leaves LaMarcus to stop penetration.

The moment DeMar crosses the 3 point line, Holmes should either let him go or try to foul, but that’s a difficult thing to ask and not everyone agrees on either strategy. But if DeMar makes a layup with 5 seconds to go, the Spurs are still down by 1, and would likely need a steal on the inbounds to have a shot at winning. The same thing can be said for a foul. Even if DeMar hits both — not a sure thing as overtime showed — the Kings would still have a 1-point lead with just seconds to go.

In the heat of the moment, though, Holmes stays with DeMar and Ariza makes a move toward the paint like he’s switching onto the roll man. Again, with so little time on the clock, there’s simply no reason to be so concerned with a two point basket. Ariza should be much more focused on what’s going on along the arc, although it’s obviously difficult to expect a player to shut off their defensive instincts.

While Holmes and Ariza are occupied with DeMar, LaMarcus sets a flare screen for Marco who runs into a wide open catch and shoot attempt on the right wing. Despite having plenty of room, he shoots immediately, still fading to his right, and drills the game-typing bucket.

For the Kings, it’s difficult to understand how they managed to give up such an open look to one of the two shooters the Spurs had on the floor. The play was well-designed, yes, but the threat of an open drive or roll with less than 7 seconds on the clock in a 3 point game simply cannot result in an open 3 point shooter. Against better teams, that likely won’t be the case.

Still, the play took the game to overtime, where the Spurs scrapped their way to the win, proving that it doesn’t have to be pretty, or even make sense, as long as it works.