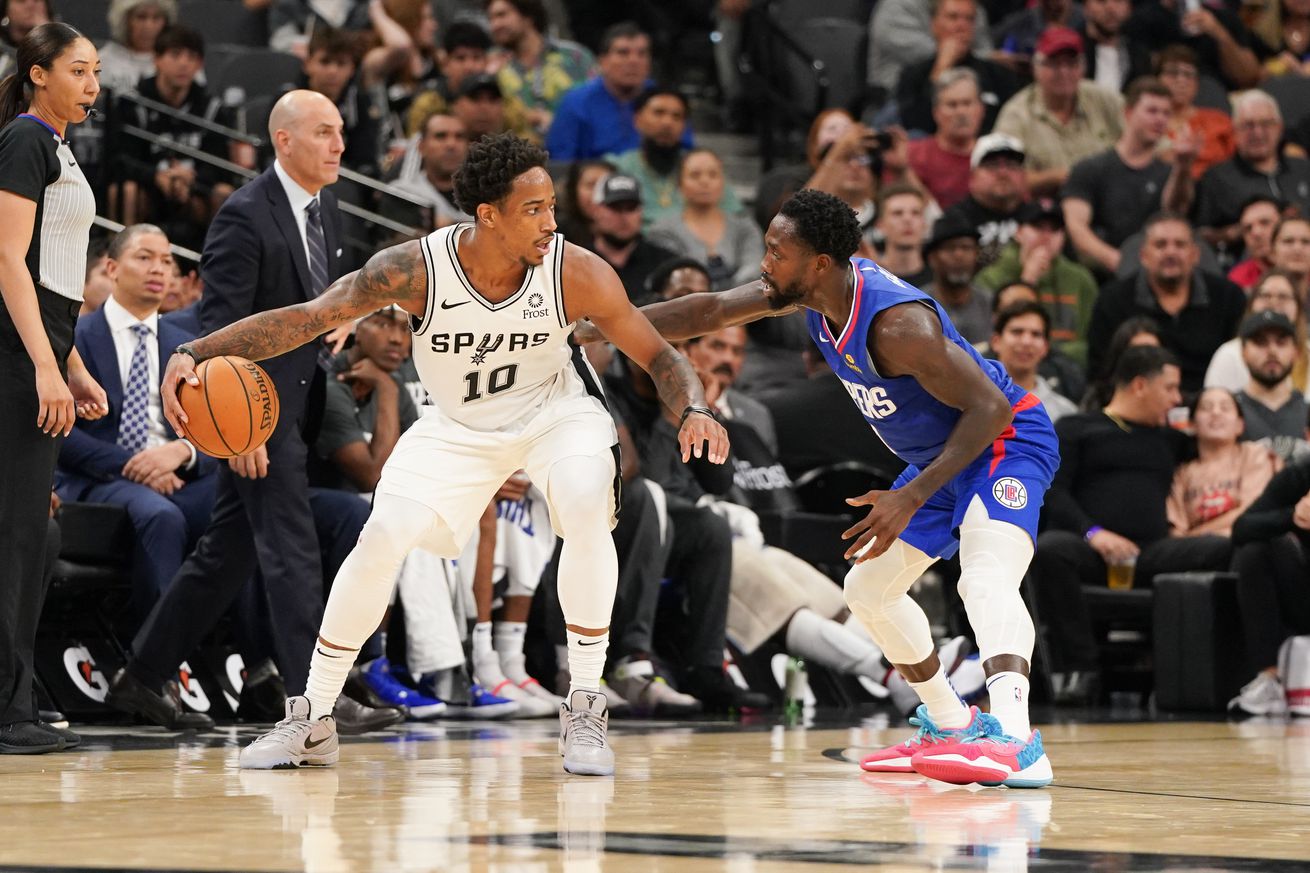 The Spurs’ throwback guard is shooting less threes than ever while putting up career-best true shooting and effective field goal percentages. Here are some reasons why.

Derrick White could only respond cheekily on Friday when asked about his teammate DeMar DeRozan’s first three-point make not only of the season, but the entire calendar year.

“I know, 1 for 1,” he said with a smile, coyly resisting the implication that the 30-year-old’s game may suddenly trend towards where the numbers say it should after casually stepping into a triple late in the shot clock.

DeRozan showed maybe less of a sense of humor later when asked about it:

Mix in a throwaway comment he made earlier this week about how he wished he played in the 90s (meaning, a time before social media), and it feels like his dated approach to the game of basketball is the simplest way to sum up his team’s early struggles.

Anyone who’s paid closer attention knows that San Antonio’s issues have been largely on the other end of the floor, where the team is still ranked 25th after holding the Clippers to 97 points, and DeRozan is certainly not guilt-free in contributing there. Lapses in effort and focus have been compounded by a general lack of the kind of playmaking and disruptiveness the team has gotten from its perimeter defenders.

Where he’ll likely go underappreciated, however, is in quietly putting together the most efficient offensive numbers through one quarter of the season, allowing him to score more than his first year in San Antonio while shooting less. His 52.6% from the field is easily tops in 11 seasons, as are his 58.3 true shooting percentage and 52.8 effective field goal percentage. Those efficiency numbers still aren’t a Daryl Morey fever dream, but they do put him just above guys like Trae Young, Kawhi Leonard and Anthony Davis: players who more cannily embody people’s idea of the new NBA.

That DeRozan’s seen that uptick while attempting a career-low three-point rate — only 5 across 20 games — is noteworthy. They’ve helped him average slightly more points per game this season (21.7 versus 21.2) on one less field-goal attempt.

Making your shots is always going to help, and DeRozan has been better than usual in getting the types of buckets that have defined his career. His shooting in the non-restricted area paint and from mid-range are both about 5% higher than they were last season, and those will probably regress. However, when they do he may have other developments that soften the fall.

The improved efficiency has also come through small positives in his shot profile. DeRozan is taking 1.5 less of his most maligned shot, the mid-range pull-up, per game this season. That number is down from 8.2 to 6.7, and that matters as it’s a two-point shot he’ll typically hit in the low 40s. Trading those for more shots at the rim is a mathematical upgrade that fits within his game.

Attempts within 3 feet are the highest they’ve been since his 2nd year in the league, according to Basketball Reference, and DeRozan’s average shot distance (10.1 feet) is the lowest it’s been since his rookie season. He’s always been savvy at getting to the line, but it’s likely that more attempts around the basket have helped translate to a higher free throw rate than last season.

It could also be that the lower usage (from 27.9 to 26.4) and slightly fewer minutes suit DeRozan at this stage in his career. His dribble-heavy game can be taxing on the legs as the game goes on, and greater familiarity with team and system may allow for him to more naturally get to his spots. This could signal a role for him down the road as a formidable scorer off the bench where his defensive shortcomings may not be as much of an issue.

For now, though, the Spurs can happily take this handful of marginal improvements, as well as him making his preferred mid-rangers, as they try to fix the deeper problems facing the team through its shaky start.