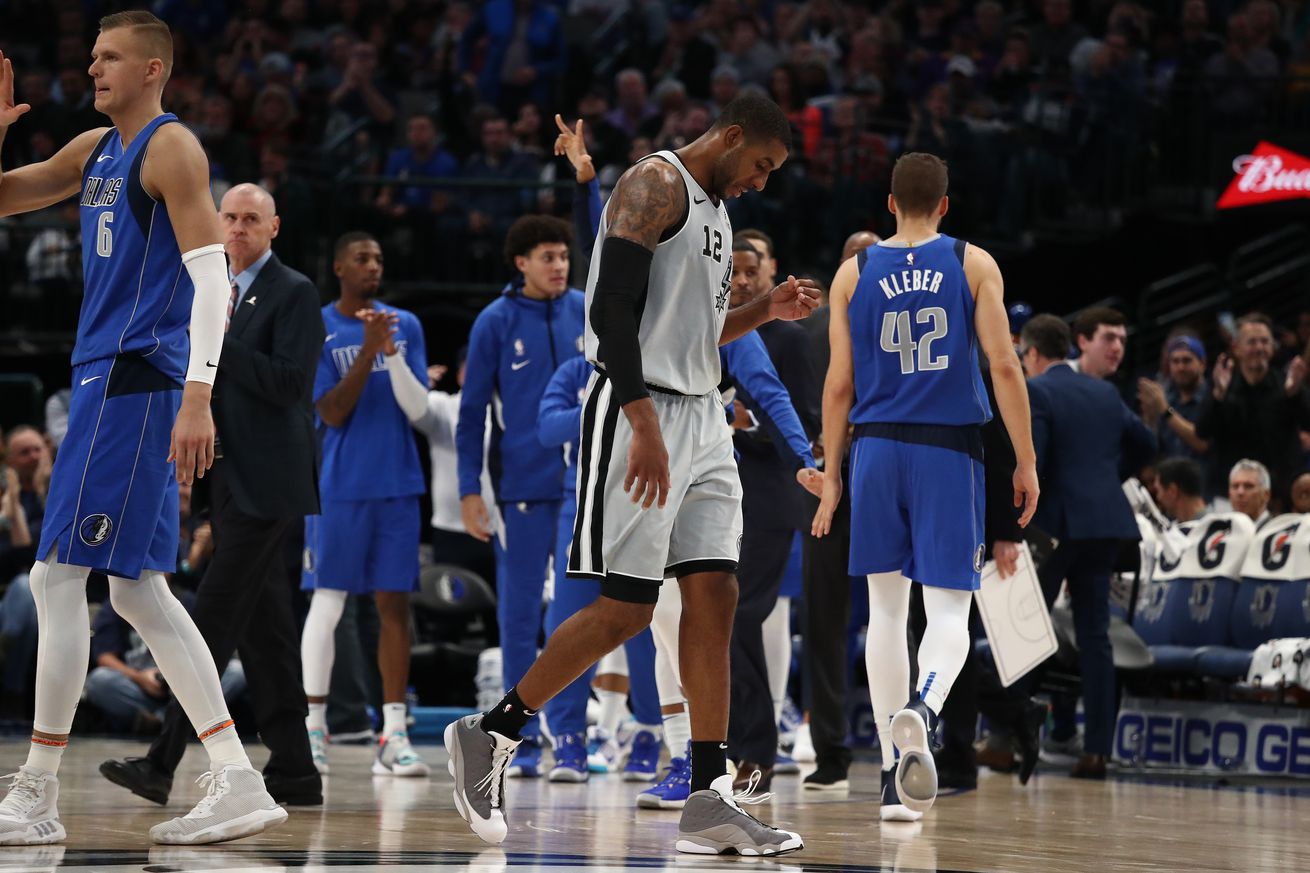 A brief glimmer of hope is painfully extinguished

With 3:03 left in the game, Dorian Finney-Smith hit the 2nd of two free throws to put the Mavericks up six. Not an insurmountable lead by any stretch of the imagination and certainly much closer than it seemed like the Spurs would be after going down 18 points in the first quarter. Three minutes is plenty of time to make some magic happen and six points, after all, means that this was only a two-possession game. Two possessions go our way and we’re right back in this, right?

It should be easy. Especially in today’s NBA where threes are basically as high percentage of a shot as a layup. I must stress the “should” part because, because if we’ve learned nothing else from the first fourteen games of the season, it’s that pretty much nothing is going to be easy this year. I watched DeMar DeRozan bring the ball up the court down six with three minutes to go and I didn’t feel hope. I didn’t feel excited. I felt tired. Oh, the Spurs only need to to hit two threes and get a stop you say? Great. That’s like telling a fish that if he wants to get out of here alive, all he has to do is breathe this air and walk up some stairs.

I’m usually pretty optimistic about things and, still, at this point I genuinely couldn’t get my brain to go with me on the concept that the Spurs could pull this off. DeMar had flames coming off him and could practically do no wrong out there and still this lead seemed insurmountable. Again, two possession game implies hitting some threes and where were those going to come from? Let’s say they do get those threes, who do we count on to step up and get a stop? Basically, at this point, the only way to envision the Spurs winning this game was to envision the Mavs losing it.

Being a Spurs fan in 2019 means constantly grappling with their limitations. There’s just no way around it anymore. DeMar isn’t going to magically start shooting threes. Dejounte Murray isn’t going to mature into a top 10 player in the league overnight. LaMarcus Aldridge isn’t getting any younger. We can ask for things like more intensity on defense or more minutes for certain players, but at this point there are very few variables that anyone can twist the knobs on and suddenly make this team fundamentally different. Of course I believe that they can play better than this. Frankly it’d be hard for them to play worse, but that’s not really the point.

What I’m struggling with is that even if they start playing better, what then? What next? The best version of this Spurs team still isn’t good enough to do the types of things you need to do to be a contender in this league right now. The best version of this Spurs team could be down six with three minutes to go against any possible opponent, and I’d still be sitting here wondering, “where are the threes coming from? Who’s going to get a stop?”

I wanted the Spurs to win this game. I want the Spurs to win the next one but, honestly, more than anything I just want the Spurs to start doing something different. Anything. Change the starting lineup. Change the way they rotate on defense or who brings the ball up the court. Start Patty Mills at center, I don’t care. Whatever it is just please give us some kind of sign that things are moving in a direction that’s away from whatever this is because it’s starting to feel untenable.

Being bad is one thing, but being stuck is probably worse.