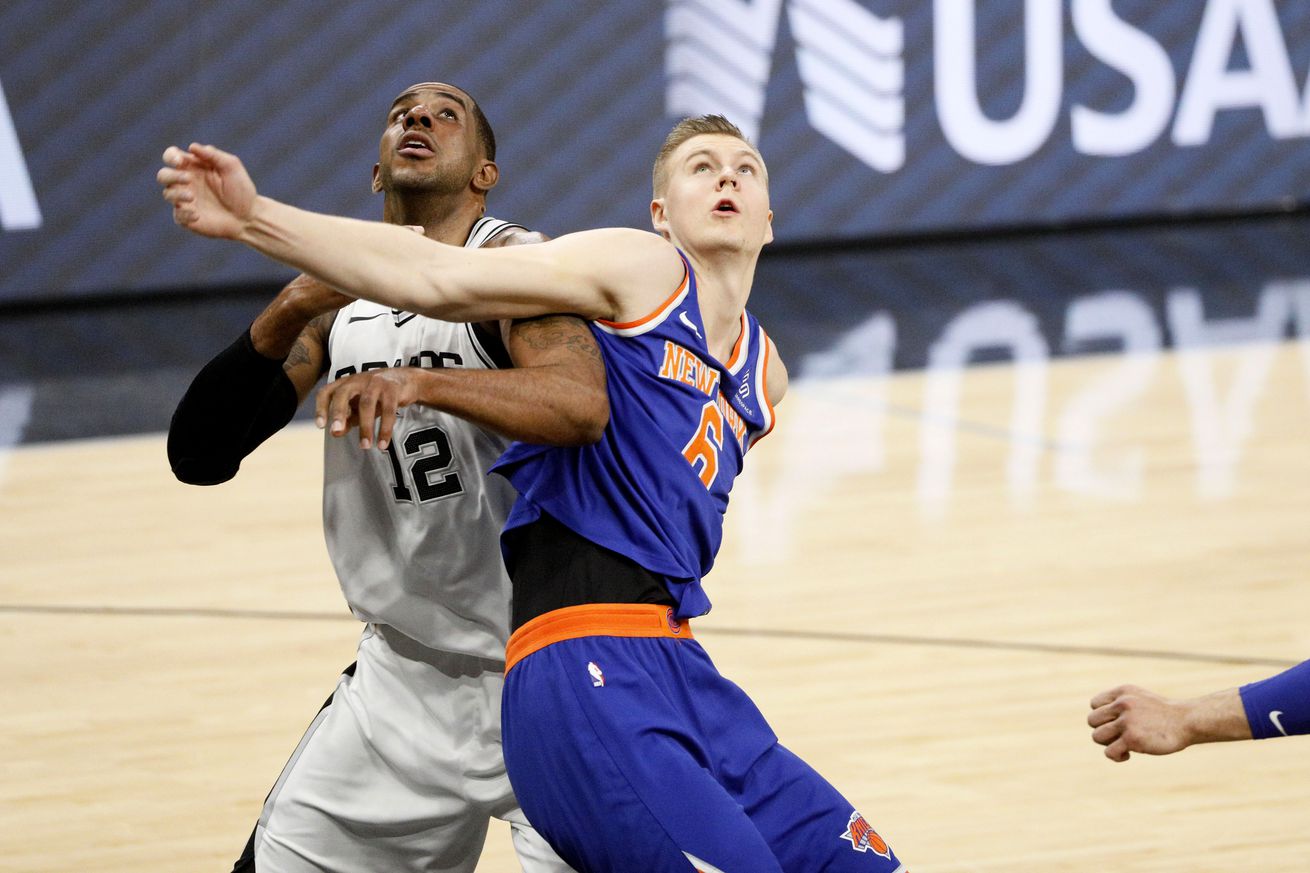 If this is real, what would it take for the Spurs to acquire another Latvian?

Sometimes all it takes is one little reference to get rumors swirling, and we got that today thanks to a non-nonchalant line in an article from The Ringer about soon-to-be free agents teams are keeping their eyes on:

The Spurs are also viewed as a team with significant interest in Porzingis, according to league front office sources, though it’d be difficult for San Antonio to create enough cap space this summer.

There are two paths that I could see leading to the Spurs acquiring current Knicks star Kristaps Porzingis; both coming with their own set of challenges, advantages, and disadvantages. The first option is to wait until the summer to sign him. The second option is to trade for Porzingis during the season, allowing the Spurs to retain his rights heading into his restricted free agency period.

Signing Porzingis in the summer

The Spurs are not known for making big mid-season splashes, so trying to acquire Porzingis as a free agent in the summer seems to be more likely. To accomplish that, the Spurs would need to create enough space under the salary cap to include his salary. In doing so, there’s a few numbers to consider:

With those numbers in mind, the Spurs would need to shed between $34-36 million in salary to fit Porzingis’ salary under the cap. That’s a significant number. Waiving Gasol and stretching the guaranteed portion of his salary over the next three seasons would save the Spurs $14 million in salary, but an additional $20-22 million would still need to be shed. Trading LaMarcus Aldridge to a team with enough cap space to absorb his contract would work, but that doesn’t seem realistic. I’ve been feeling more and more like Aldridge will retire in a Spurs’ jersey. Trading Patty Mills as well as either Marco Belinelli or Davis Bertans would also work, but doing so would likely cost the Spurs some type of draft compensation.

The Spurs would have to gut their roster to make room for Porzingis, and even that wouldn’t guarantee that Porzingis would choose to sign with them. There will be plenty of other teams with assets and cap space that will be interested in his services. The Boston Celtics might not have cap space, but if Kyrie Irving wants to go to New York and Porzingis likes the chance at winning a title with the Celtics, a sign-and-trade is possible.

Even in the case the Spurs are able to free up enough cap space to sign Porzingis and he signs the offer sheet, the Knicks would have two days to match the offer. If the Knicks match, then the Spurs would have gutted their roster for nothing.

If the Spurs are seriously considering adding Porzingis to the roster, a trade seems like the best option. The Knicks have aspirations of signing a combination of Irving, Jimmy Butter, and Kevin Durant. However unlikely that may seem, the Knicks will be seeking some combination of young assets on rookie contracts, draft picks, and future cap relief. If the Spurs are interested in trading for Porzingis, do they have enough assets to get the Knicks to bite on a trade? I guess the answer to that question is dependent upon what the other teams interested in trading for him have to offer.

The Celtics, for example, have plenty of young assets. They will also have up to four first round draft picks in the 2019 draft. It would be difficult for the Spurs to compete with that if they are truly interested in acquiring Porzingis. With that said, what assets do the Spurs have to offer in a trade?

The Spurs have a nice mixture of veterans in their prime and young up-and-comers. In my opinion, the player most likely to be dealt in a trade for Porzingis is Dejounte Murray. He has the exciting upside that other front offices would look for in a young asset, and the ascension of Derrick White could convince PATFO that Murray is expendable.

(Note: this article is not trying to make the case as to whether or not this is true, but rather it is simply stating that Murray is the Spurs’ best asset in a trade. He’s just a year removed from making first-team all-defense, and he’s only 22 years old. Derrick White would be an alternative to Murray, but the Spurs have playoff aspirations this season. Losing White for a player who won’t likely play this season would severely reduce their chances of making the playoffs, much less making a deep run.)

While Murray would be the centerpiece of any trade for Porzingis, the Spurs do have other young assets to offer as a sweetener in trade discussions. The Knicks are in the bottom third of the NBA in three point percentage, so acquiring shooters such as Bryn Forbes or Davis Bertans might be enticing. Jakob Poeltl has fantastic advanced statistics as a traditional big with sneaky agility, and he will still be on a team-friendly contract next season. Plus, the Knicks would be losing Porzingis and will almost certainly be losing Enes Kanter at some point, so getting a big back in the trade would be a good idea.

A trade of Porzingis for Murray, Poeltl, Quincy Pondexter (to keep the Spurs under the luxury tax), and the Spurs’ own 2019 first rounder seems like the best offer the Spurs could make for Porzingis alone (remember, he is still on his rookie contract and is owed about $5.7 million this season). If the Knicks agree to this trade, the table below shows the Spurs’ salary cap situation heading into next season, assuming he signs a max contract.

The salary cap for next season is expected to be at $109 million with the luxury tax line being at $132 million. Keeping Gasol on the books would put the Spurs right on the tax line, and that’s without Gay. The Spurs could save $14 million next season by waiving Gasol and stretching his guaranteed salary over the next three seasons. That would drop the Spurs’ salary down to $117 million, giving them enough space to re-sign Rudy Gay using the early bird exception while staying below the luxury tax. If Gay’s contract starts at around $10 million a year, the Spurs should have enough space to fill out the last couple spots with veteran minimum contracts.

The Knicks desire for future cap relief might end up being the biggest roadblock in a trade for Porzingis. As previously mentioned, they are looking to swing for the fences in the summer by trying to land some combination of Irving, Butler, and Durant. This desire is going to make the Knicks want to attach Porzingis to one of their longer contracts. The two obvious choices are Tim Hardaway, Jr. and Courtney Lee. Hardaway will make $18 million in 2019-2020 and has a $19 million player option in 2020-2021. Lee is owed just under $13 million next season. Getting one or both of those contracts off their books (in addition to not having to sign Porzingis to the max) would give them plenty of cap space heading into the summer.

Under that scenario, the Spurs could make a reasonable trade for Porzingis without having to give away any players from their current rotation. Murray, Gasol, and two first round draft picks for Porzingis and Lee would work financially. The real issue of a trade like this occurs next season once Porzingis’ max contract is added to the books. The Spurs salary given this scenario is shown in the table below.

This puts the Spurs over the projected luxury tax without the option of waiving and stretching Gasol. It also results in no Gay but does allow Poeltl to remain with the team. The Spurs would almost certainly have to find a new home for Lee. There should be plenty of teams with cap space, so sending Lee to one of those teams for a 2nd rounder or two should be an option. Removing Lee would drop the Spurs to around $120 million in cap space, giving them some room to sign Gay, but not much, especially considering replacing Lee with Gay would only give the Spurs 13 players under contract.

I wouldn’t make a trade this season for an injured player that would risk team chemistry, which rules out any trades involving Poeltl or White. Forbes has been great for us, but I wouldn’t have him be the roadblock to acquiring Porzingis. I also wouldn’t wait until the summer to try and fight the other teams for Porzingis while simultaneously gutting the roster. A month ago Murray would have been my only untouchable on the entire roster, but things change. White has been excellent for the Spurs, and he’s still under his rookie contract for an additional two seasons.

With that being said, I’d be perfectly happy with the Spurs not making any moves this season. Their entire core is under contract next season with the exception of Gay. Murray will be back, and the Spurs will likely have two first round draft picks to either trade for an established player or try and strike draft gold once again. I took a lot of time just to come up with the conclusion that the Spurs should stand pat, but I wanted to discuss the options the Spurs have in the event they do decide to make a splash. As the last year has proven, anything can happen.