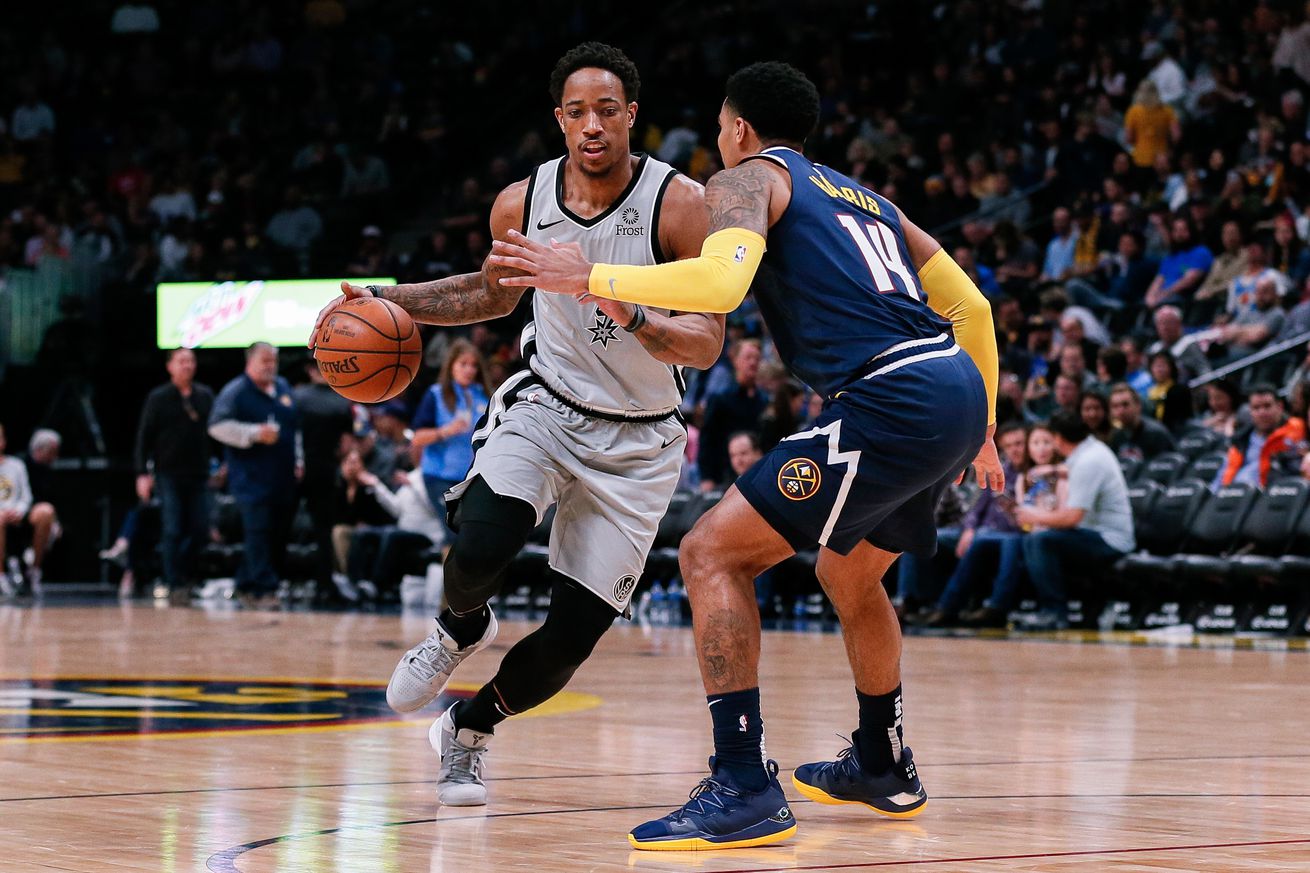 Taking a look at the strengths and weaknesses of each team and what San Antonio’s focus will focus on.

On their final game of the regular season, the Denver Nuggets trailed the Minnesota Timberwolves by eleven points with just over three minutes to play. Unlike some of the other teams around the NBA, the Nuggets were trying to win. All of their rotational pieces were playing regular minutes, but they were having issues putting things together on the offensive side of the ball.

This has become a familiar trend with the Nuggets. Their True Shooting Percentage (TS%) of 52.3% over the final 11 games of the regular season was the second worst mark in the NBA, and they had a record of 5-6 during this stretch. The Nuggets found their offensive rhythm just in time to mount a huge comeback in the final minutes against the T-wolves. The comeback allowed the Nuggets to stay 2nd in the West heading into the playoffs, matching up against the San Antonio Spurs in the first round.

The Nuggets and Spurs split the season series, with the home team claiming all four wins. The Nuggets had several injuries to key players during the first half of the season. Both Gary Harris and Paul Millsap missed the majority of the games in December, which coincided with the home-and-home between the Spurs and the Nuggets. Will Barton, who missed the majority of the games in the first three months of the season, was also out during the home and home with the Spurs. With three of the Nuggets’ starters missing during these first two games, it’s hard to extract too much useful information out of these games.

The Spurs and Nuggets played twice towards the end of the regular season with both teams at relatively full strength. The Spurs won wire-to-wire in the first game in San Antonio, but they nearly blew a double-digit fourth quarter lead. The second game was a blowout loss in Denver where Coach Pop got ejected in record-setting fashion and both teams were in a SEGABABA.

The premier matchup this series is Jokic and Aldridge. Jokic had a disappointing first game against the Spurs, but in the final three games he went 29 for 38 from the field, averaging 21 points, 10 rebounds, and 8 assists. The good news is that the Nuggets have trouble containing Aldridge as well. Aldridge averaged over 22 points on 55 percent shooting. If Aldridge can play Jokic even I’ll consider it a win for the Spurs.

Murray’s play can be inconsistent at times, but when he’s on, he’s one of the more electric players in the NBA. Derrick White is going to have his hands full trying to keep Murray in check. Jokic is a great player, but if I were Coach Pop, I would have the anybody-but-Murray mentality. Hopefully White can stay out of foul trouble, as we’ve seen how much that can have an impact on White individually and the Spurs as a team.

Both bench units score almost identical points per game. The Spurs’ bench tends to generate a lot of offense out of ball-movement and three pointers whereas the Nuggets’ bench prefers to get to the paint and score. Both the Nuggets and Spurs are very deep teams, so it’ll be interesting to see how short the rotations get now that the teams are in the playoffs. I expect the Spurs to continue going with a nine-man rotation. Jakob Poeltl might see his minutes reduced somewhat, but with the Nuggets having three solid bigs, Poeltl may be very important this series.

Outside of individual matchups, I prefer looking at the season-long statistics to draw any meaningful information.

Spurs should have a shooting advantage in the series

The Spurs have a top eight offense both in terms of offensive rating and TS% despite the fact that their three highest scorers – LaMarcus Aldridge, DeMar DeRozan, and Rudy Gay – all love the midrange shot. Though this is the least efficient shot in the NBA, the Spurs are at least more efficient than most – their 43.3% from midrange is the fourth highest mark in the NBA. Though the Spurs take a lot of midrange shots, what makes the Spurs’ offense so dangerous is that they can beat their opponent from anywhere on the court. The Spurs are the top team in the NBA in three point and free throw percentage. They are also fifth in the NBA in shooting percentage inside the restricted area and first in the NBA in shooting percentage inside the painted area (non-restricted).

The Nuggets shouldn’t offer up much resistance when the Spurs attack the paint, as they are near the bottom of the league in terms of opponent shooting percentage from inside the painted area. Hopefully the Spurs will be aggressive on offense and try to exploit the Nuggets in the paint, especially since shots from outside the paint will be harder to come by.

Though the Spurs are very efficient at the midrange and the three point shot, the Nuggets are the top team in the NBA in opponent shooting percentage from these distances. Something is going to have to give in this series.

When looking a bit deeper into the numbers, I noticed that the Nuggets are average-to-below-average at defending the corner three. Where they really excel is in preventing the three pointer at the top of the key, where opponents are shooting only 32 percent for the season. Bryn Forbes and Davis Bertans take the majority of their three pointers from this area of the court, so it’ll be interesting to see how successful they are able to be in this series.

The Nuggets are an average shooting team from everywhere on the court, and their league average offensive rating and TS% reflect this. They were particularly inefficient towards the end of the regular season, but the Spurs haven’t been able to slow down too many defenses this season. The Nuggets averaged the fourth most points in the paint this season, as they have skilled bigs who can score from inside or outside and several slashers in Jamal Murray, Gary Harris, and Will Barton who like to break down the defense.

Expect a heavy dose of Aldridge in the post

Aldridge has had success against the majority of the teams in the NBA this season, and the Nuggets are no exception. The Spurs have been the fourth most efficient team in the NBA in post possessions, scoring just under one Point Per Possession (PPP) during these play types. The Nuggets give up just under one Point Per Possession (PPP) on post plays, which is good for 25th in the NBA. With the Spurs loving the post game and the Nuggets unable to stop post players from scoring, Aldridge should be able to feast.

Now time for the elephant in the room. Everybody knows that at some point the Nuggets are going to start double teaming Aldridge in the post. Nikola Jokic, Mason Plumblee, and Paul Millsap are all unable to guard Aldridge one on one, so it’s going to happen. Maybe not right away, but it’s going to happen and the Spurs are going to have to be ready. Though the Nuggets are a bottom team in terms of stopping post plays, they are in the top 10 in the NBA in defensive PPP during plays where the post player has to pass out of the double team. This means they may not be great at individual defense, but they play smart, solid team team defense.

The Spurs must team rebound in this series

The Nuggets are one of the best teams in the NBA at scoring points off offensive rebounds. The Spurs, on the other hand, are near the bottom of the league. If the Nuggets are able to gain extra possessions off of rebounds, this will eliminate the Spurs’ shooting advantage. It’s going to take a team effort keeping the more athletic Nuggets off the glass. Little things like boxing out can end up playing a pivotal role in deciding the outcome of a series where both teams are so evenly matched. I expect that Coach Pop will have his players ready, but I feel one of the weaknesses of this iteration of the Spurs has been their lack of attention to detail on the court. This must change starting this weekend.

The transition game favors the Nuggets

Despite the fact that the Nuggets are a young and athletic team, they aren’t typically a run and gun team. Actually, their pace this season has been towards the bottom of the NBA, just below the pace of the Spurs. A lot of this has to do with the fact that their main playmaker, Jokic, is a big. Still, when the Nuggets do get out in transition they are dangerous. Couple that with the fact that the Spurs are the worst team in the NBA at defending transition possessions, and the Spurs could find themselves getting run out of the gym if they are not careful with the ball, especially on the road.

The Spurs don’t turn the ball over very often, but when they do, the turnovers tend to be of the live-ball nature (was anybody else reading the last sentence as the Dos Equis guy or was it just me?). This prompts transition possessions which has oftentimes led to the Spurs losing the turnover battle despite turning the ball over as infrequently as they do. Other than team rebounding, I think limiting live ball turnovers and getting back on defense is going to be the most important thing the Spurs can do to eliminate some of the Nuggets’ advantages.

The Spurs and Nuggets had the two best home records in the Western Conference this season. It’s hard to play in the Denver air, but the slow pace of the Spurs should help reduce fatigue. The Spurs are very difficult to trust on the road, but I think they will steal one game on the road at some point in the series. I have to trust that the experience Coach Pop is going to bring to the playoffs will be enough to get his team in the right mindset to have some semblance of success on the road. So to me this series is going to come down to whether or not the Spurs can prevent the Nuggets from returning the favor in San Antonio. I think this series has the best chance at going the full seven games, but I’m going to pick the Spurs in six.