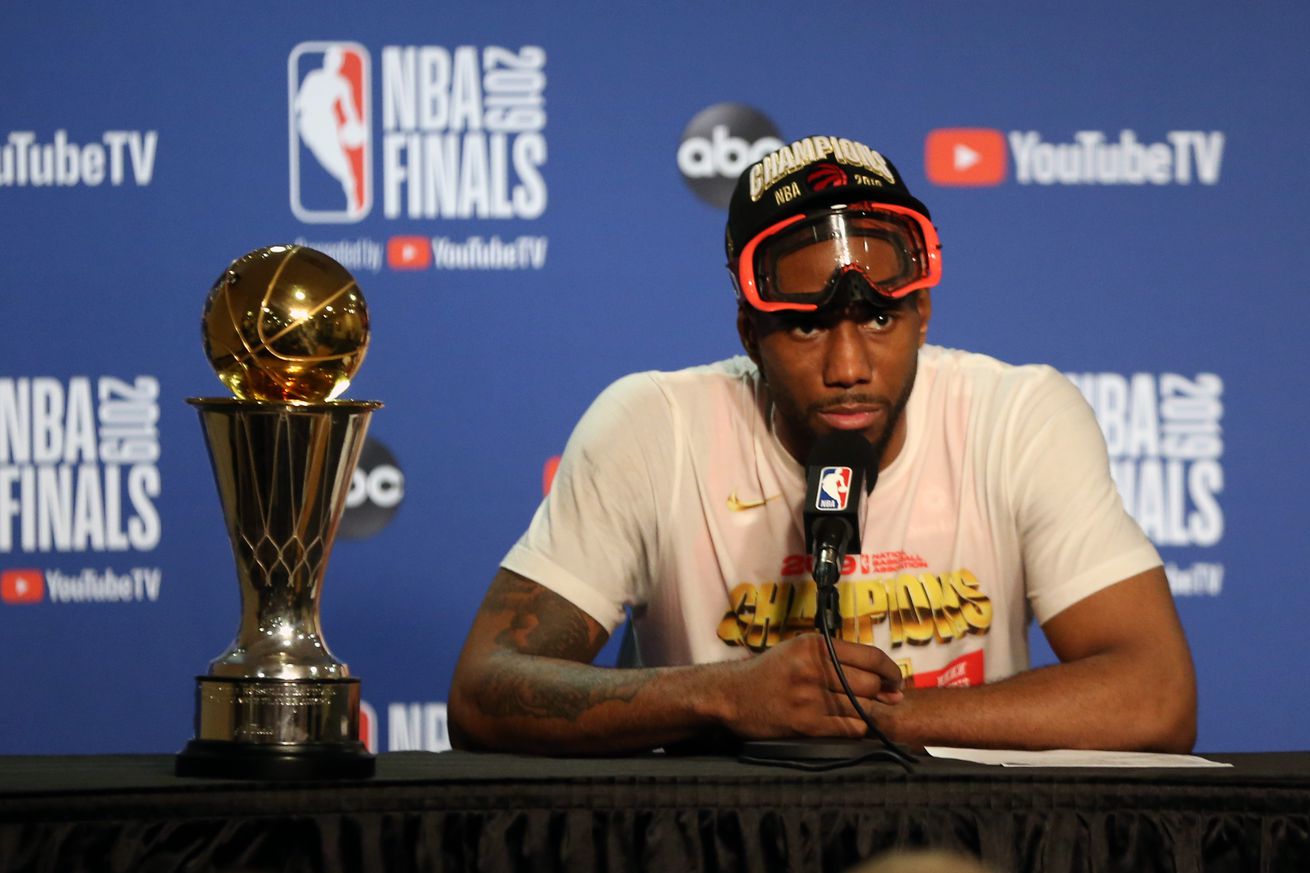 The Spurs came out of it better than you think.

With Kawhi Leonard finally announcing his decision to join the Clippers, it’s time to revisit the most important trade of the 2018 offseason. The Spurs, finally admitting there wasn’t a viable path to repairing the team’s relationship with its disgruntled star, sent him to the Raptors along with Danny Green, in exchange for DeMar DeRozan, Jakob Poeltl and the Raptors’ 1st round pick in this year’s draft, which turned out to be Keldon Johnson.

Given all that Kawhi and the Raptors achieved together, grading the trade for the two sides might seem simple, but there’s a lot more to consider than just who changed teams. So let’s dig in and examine the winners and losere in the trade of Kawhi Leonard.

It’s hard to overstate just how well this has all worked out for the San Diego State product. He moved to a franchise willing to cater to his whims, managed his workload during the regular season to an astounding degree, and asserted himself as possibly the best player in the league on the biggest stage there is. He now has a 2nd NBA championship and a 2nd Finals’ MVP under his belt and just had multiple franchises bowing and scraping at his feet just for the privilege of paying him as much money as they are legally allowed to.

Now he’s going to play in the exact market he wanted to play in for a franchise that’s made some of the shrewdest moves over the last couple of seasons, acquiring a bevy of young talent on good deals. Though they’ve flipped much of their ability to add new young talent over the next 5 years into Paul George, that trade landed Kawhi as well, making it easily worth the cost. With the Warriors’ championship era potentially over, Kawhi and the Clippers will have as good a shot as anyone at taking the Western Conference.

If the Clippers win the title next season and Kawhi outplays George, he’s going to find himself in some rarefied air. Being the best player on back to back title teams is always impresssive, but doing it with two different franchises is unprecedented.

Trading DeMar, by all accounts, was a gut-wrenching decision for Raptors’ management, but it was the right decision for the team and its fans. Even without knowing whether Kawhi’s health would hold up, the Raptors took a swing at taking the belt and it worked. Hindsight makes it seem like an obvious decision, but it clearly wasn’t (something we’ll come back to when we get to losers).

They’ll bring back a core of solid veterans and young talent capable of remaining relevant in the Eastern Conference even without Kawhi. They’ll have the choice of looking to rebuild on the fly, as the Spurs have chosen to do, though they have much more cap flexibility moving forward than the Spurs have in quite some time. If that path doesn’t seem to be working out, they could also take the hard reset option and trade away their vets for draft picks and prospects. Either way, there’s every reason to expect Masai Ujiri and the front office to keep the team moving in the right direction.

It will be interesting to watch this team move forward. They massively out-performed expectations last season, especially after trading away Tobias Harris, and appear to have a great understanding of what they have and what they need to compete. By flipping some of their hard-earned assets into Paul George, they’ve given away much of their ability to continue building around their two superstars, but even if their options are limited, betting against Kawhi in a seven-game series may be a fool’s errand. Barring injuries or a new superteam, the Clippers will likely be title favorites for the next 3 years.

It could be argued that unless Keldon Johnson turns into an All-NBA player, the Spurs got fleeced in the trade — so how can they be considered winners? Easy, because they got exactly what they wanted out of the deal. They needed scoring and playmaking to fix their dreadful offense, and they got both in DeMar. They needed a capable young big to supplant the aging Pau Gasol, and they got one in Jakob Poeltl. They needed to continue adding to their cast of talented young players as they search for their next franchise cornerstone, and they got a draft pick. They did all of that without compromising their future cap room and maintained all the flexibility they need to continue investing in that group of potential future stars.

The Spurs may not have gotten equal value in return — nobody ever does when they trade away an elite player — but at least they got something. Holding on to Kawhi for another season, without resolving his friction with the team, was never a practical option. Even if they had, they’d likely still have lost Kawhi and wouldn’t have gotten anything in return because it is now obvious that his plan was to go home all along. With their backs against the wall and the whole world aware that Kawhi needed to move, the Spurs managed to extract just enough value to keep the team moving forward.

If it’s hard to believe there weren’t better options on the table, then congratulations, you just identified the losers in this whole ordeal.

Honorable Mentions: Every other player on the Raptors, Canada, people who’d like to believe that the Eastern Conference is a viable and competitive part of the National Basketball Association, parity and Warriors haters.

One year of the best players in the league playing at his absolute best in May and June is worth more than DeMar, Jakob and a late first rounder all by himself, and that’s without considering how good Danny Green is. But the question isn’t “why didn’t the Spurs get more?” The question is “why didn’t 5 or 6 other teams blow that offer out of the water?”

It’s a bit nonsensical to assume the Spurs rejected an offer that was clearly better. While teams may have offered packages more focused on future assets than current talent, it’s unclear why DeMar would’ve been the best veteran player on the table. Once the Spurs made it obvious they were looking for the type of offer they eventually took, it seems pretty evident now that nearly finished every player in the league should’ve been available.

Put another way, how many teams would’ve won the title if they had replaced their best, or in some cases, second best player with Kawhi? And all of those teams had an opportunity to trade for him when his value was as low as it will ever be. They chose not to because of the risk, optics, or some other reason, and that’s fair. But there are a lot of franchises that could’ve had gotten a ring this year if they’d only taken that swing, and every one of them should regret it.

After missing out on Kawhi, the Lakers find themselves desperately needing to fill out the rest of their roster. While Anthony Davis could be the best player LeBron James has ever had as a teammate, without at least a little depth, there’s no reason to expect them to contend this year. The West will still be a bloodbath, and at this stage of his career it’s hard to expect LeBron to maintain the level of play he’d need for a whole season to cover the massive gaps in the LA’s roster.

Unfortunately for the Lakers, what remains of this year’s free agent class is lackluster at best. Danny Green represents an upgrade at shooting guard and they’ve committed to reuniting AD with DeMarcus Cousins, which is … interesting, if nothing else. Regardless, the team that scored the biggest coup of the early offseason appears to have come up just a little short of refashioning themselves into a championship squad.

It’s impossible to know what, exactly, the Lakers offered for Kawhi last year, but it wasn’t enough. Had they executed that trade, there’s a good chance he’d still be on their roster and they would’ve been able to pursue any of the other free agents on the market this offseason instead of watching and waiting, and eventually finding themselves on the outside looking in.

Honorable Mentions: Team doctors (Spurs and Warriors especially), the 76ers a 2nd time because even with Kawhi the Raptors needed every one of those last 4 bounces to beat them, and everyone who downplayed Kawhi’s trade value last summer.

The winners and losers of the Spurs/Raptors Kawhi Leonard trade
Source: Pounding The Rock