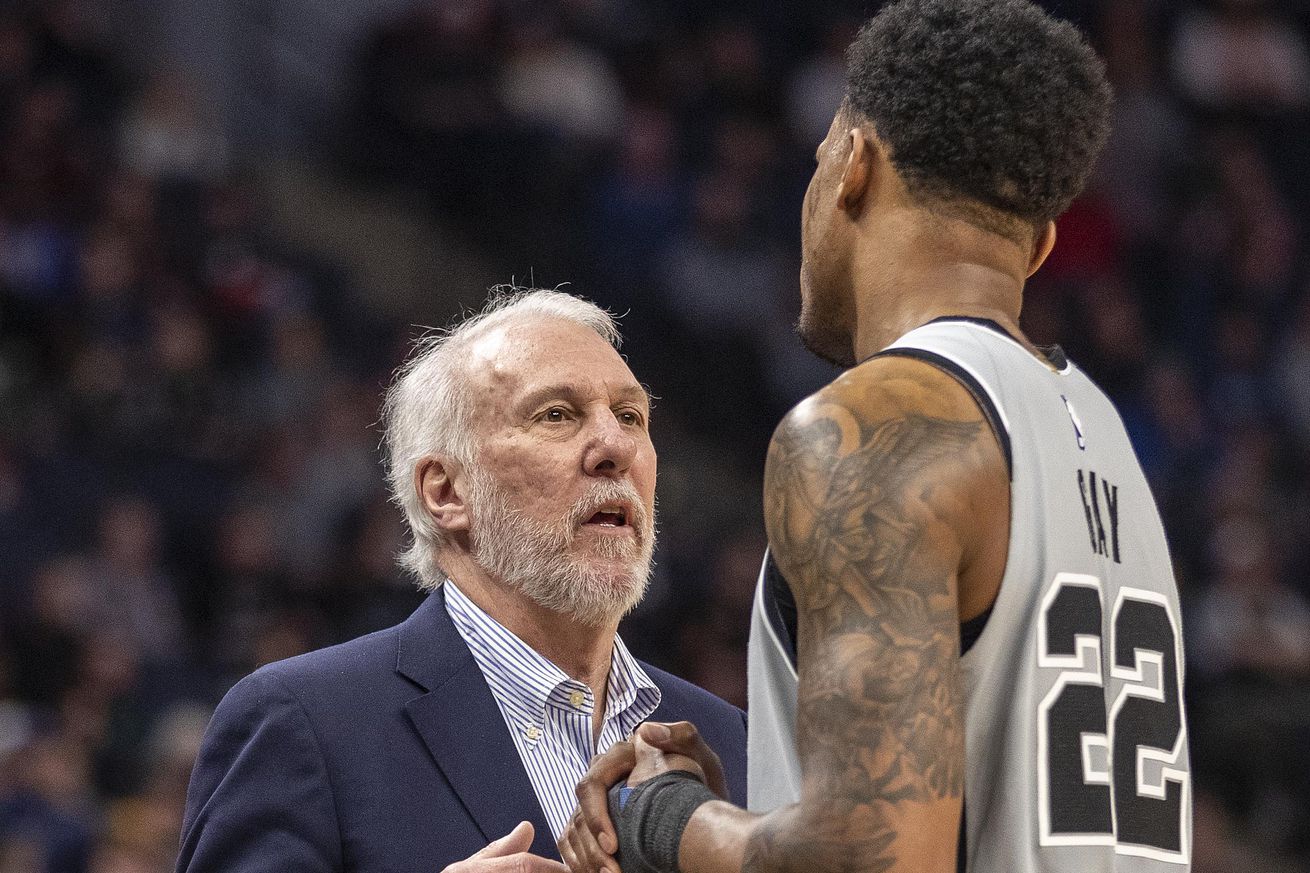 San Antonio doesn’t shoot many threes. But the deep ball isn’t the only way to be efficient.

The Spurs’ offensive flow can be fascinating. The way the team shifts back and forth from postups, isolations, and simple pick and rolls with one group to complex ball and player movement with another is rare. Put even a couple members of the U.N.B.M. on the floor and every possession suddenly has the potential to become basketball ballet.

Take Rudy Gay’s dunk at the end of the 1st quarter of San Antonio’s won over the Minnesota Timberwolves for example.

At first glance, this looks like a simple defensive breakdown on a straight-forward pick and roll, but that’s not quite fair to the Timberwolves. The three players spacing along the three point line are deadly shooters. Bryn Forbes, Marco Belinelli and Patty Mills are all hitting over 40% of their catch and shoot threes, so helping even a little could be fatal.

Dario Saric switches onto Jakob as soon as he feels contact, but Taj Gibson’s not quite in position to stop a drive to the middle. If Jakob had continued on his roll to the basket, that wouldn’t have been such a big deal, because he would’ve dragged Saric right in the way.

But Jakob understands what has happened and halts in his tracks, preventing either Saric or Gibson from getting to Rudy in time. That leaves the Timberwolves’ weak-side help as the last line of defense. Unfortunately for Minnesota, Patty and Bryn are never just standing around, and both are out there on the weak-side messing around.

Bryn moves in from the corner behind Jerryd Bayless and hits him with a pretty solid screen while Patty fades to the corner. That little bit of movement takes both Bayless and Derrick Rose out of the play. Rose calls the screen for Bayless, whose head is turned completely away from the action at the exact moment he should step into the paint to cut off Rudy’s penetration.

Although it had nothing to do with the success of the play, another interesting thing to note is Marco’s lift out of the far corner up to the wing as Rudy drives. This serves two purposes at once. It both provides an open passing lane if Rudy needs to kick the ball out and preserves the team’s floor balance, meaning more than one defender will be able to get back on defense ahead of the Timberwolves, should they somehow turn the result of the play into a transition attempt.

LaMarcus Aldridge scored on a layup off a play with that exact same lift late in the 2nd quarter.

The timing on this play, too, is superb. Patty brings the ball up the right side of the court, but veers to his left just as he passes the logo. His change in direction triggers Davis Bertans to dive to the basket then clear out to the right corner and LaMarcus to move up to set a screen. LaMarcus runs, leaving Karl-Anthony Towns behind. Towns is still moving into position as LaMarcus sets the screen.

This is a Tim Duncan-special flat screen, which gives Patty the ability to accelerate towards the basket immediately. As he comes flying off the screen, Towns has no choice but to drop into the paint. Patty has a ton of room to work with and he snakes back to his right to force the Timberwolves to make some hard decisions.

As he gets to the right elbow, with no defender in close proximity, Patty looks to pull up. Towns makes a fatal mistake here, faking a contest towards Patty as he gathers. It’s all the window the Aussie needs to thread a pin-point jump pass to LaMarcus as he rolls to the rim.

There’s no movement on the right side of the floor this time, with both Derrick White and Davis providing all the spacing the play needs just by existing. On the other side of the court, though, the exact moment of Marco’s lift is critical.

Once Patty snakes back to his right, that leaves Rose as the only person who can help on LaMarcus’ roll. Marco’s lift, executed right as LaMarcus gets moving downhill, forces Rose to choose between leaving Marco open on the wing or helping down in the paint, neither of which results in a good outcome for the Timberwolves.

These little movements are critical to an efficient offense, especially one capable of surviving without one of its stars, but they rarely show up on the stat sheet. Jakob gets a screen assist on the first play (and should get two) and Patty gets an assist on the second, but Bryn gets nothing for the movement that pulled Bayless away from his help responsibilities and Marco’s perfectly timed lifts were instantly forgotten as well.

These little plays are what win and lose games, though. Even on a choppy and otherwise forgettable night, a little bit of clean execution can make the difference. The Spurs’ got 4 easy points on Rudy’s dunk and LaMarcus’ layup and won by 3. Nobody would ever say they won because of these two plays, but it’s fair to say they probably wouldn’t have won without them.