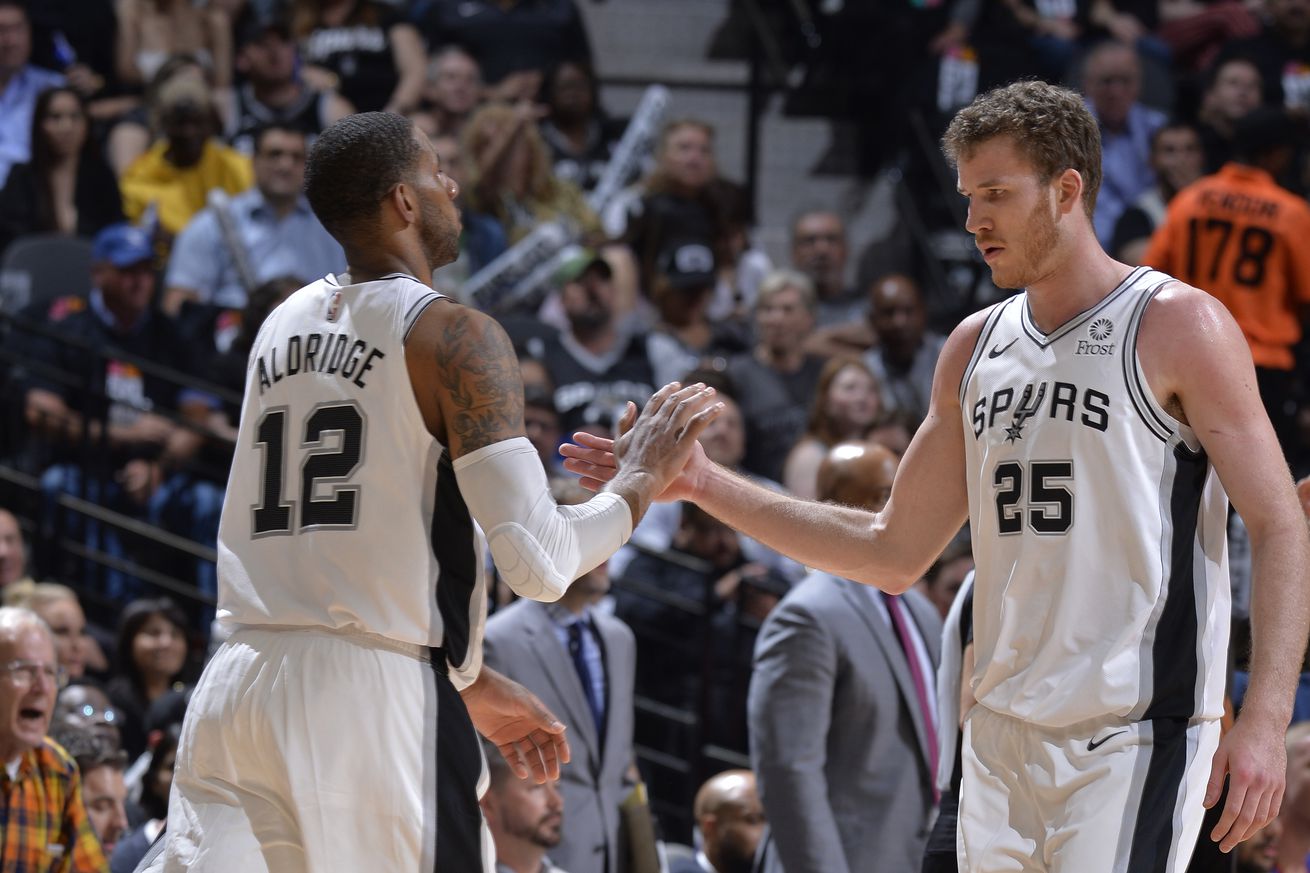 A few bright spots in another disappointing defeat

Despite the result, the Spurs should come away from their 121-116 loss to the Trail Blazers feeling much better about their performance than in the first 4 games of their 5-game losing streak. On the 2nd night of a back-to-back and without Dejounte Murray, the team fought their way back into a game the Trail Blazers nearly shot them out of in a blistering 41 point 1st quarter.

It’s a make or miss league, though, and the Trail Blazers’ 2nd and 3rd quarters more closely adhered to the latter half of that old truism. But that doesn’t mean the Spurs’ defense was somehow better in those quarters. They were actually pretty good, comparatively speaking, for the entire game. They showed as much cohesion and effort on that end throughout this contest as they have at any point this season.

It can be difficult to separate defensive execution from points allowed, making it hard to see the 121 points Portland scored as emblematic of anything but another poor performance. They were far from perfect, but the simple breakdowns that plagued their embarrassing loss to the Magic and much of the first 3 weeks of the season were nowhere to be found. A great example came a little over halfway through the 3rd quarter.

Instead of lagging behind the play after a particularly frustrating no call, DeMar DeRozan hustled back on defense, catching up to Nassir Little under the rim just in time to make the steal before bringing the ball back up court with a vengeance.

Staying involved in the play may not seem like a huge thing, but it’s one of DeMar’s biggest weaknesses. If he can eliminate how often external factors, like that exact kind of no-call, affect his focus, he will be a much better player. The DeMar frustration foul – technical foul combo is one of his signature moves, right alongside his faceup euro and the contested pull-up midrange jumper.

On most nights, especially given how much the zebras had already influenced the game, that missed blocking foul would have resulted in a quick reach in on the ball handler and a demonstrative protest that left the referee little choice but to T him up. But, for some reason, DeMar put his head down and made a pair of solid plays that shrank the deficit to just a single point.

That what was easily their best defensive showing of the last two weeks resulted in yet another loss is frustrating, and DeMar’s comments on how the game was refereed afterwards reflect that fact. But there’s more reason to be hopeful about the team’s short term prospects than just the expectation that they won’t be on the wrong side of a last minute officiating report every game (as they have been for three of the last four games).

For the first time this season, the Spurs gave their two big lineup an extended look, and the returns were very positive. Jakob Poeltl and LaMarcus Aldridge shared the court for the first 4:49 of the 3rd quarter, and the Spurs managed to generate several quality looks on offense while still reaping the defensive benefits of their twin tower alignment.

Alongside Derrick White, Bryn Forbes and DeMar, they outscored the Trail Blazers 14-13 in that time, but how each team went about manufacturing those points is much more important than how many they actually put on the board. For the Spurs, that amounted to their typical combination of great ball and player movement that generates easy open looks and their fair share of midrange jumpers, because that’s who they are.

Their best half court possessions resulted in a wide open three and an open dunk for LaMarcus Aldridge.

DeRozan’s drive draws attention from both Little and Hassan Whiteside, allowing LMA to slowly backpedal out to the arc. Poeltl’s screen ensures there will be no close out and even though Aldridge bricks it, this is a good shot.

Once again, DeRozan’s drive draws a ton of attention, though for a moment it appears the lack of spacing is going to kill the play. But White opens up a passing lane for DeMar at the last moment and gets a head start on Damian Lilliard as he drives into the lane. With Aldridge and Poeltl on opposite blocks, no matter which Trail Blazer comes up to contest, White’s got an opening. Whiteside commits, so Derricks drops it off to LaMarcus for the dunk.

They also produced open looks from the midrange for Bryn Forbes, DeMar, Derrick and LaMarcus, and benefited from Bryn nailing a difficult one dribble pull up three from the left wing. Just as importantly, the Spurs were able to attack early in the clock multiple times. They didn’t score very efficiently on those 4 early offense / transition possessions, despite getting several good looks.

DeMar missed a layup he had to loft high off the glass over a Whiteside contest and Jakob mistimed his jump on the tip on their first opportunity. On the second, Derrick used a little too much heat as he tried to enter the ball to LaMarcus who had beat his man down the floor, which resulted in a turnover. On the third, Jakob got called for an offensive foul at the same time the refs missed what should have been an obvious flagrant foul on Little.

Derrick and LaMarcus combined to make up for it on the fourth, though, with LaMarcus sealing Whiteside down low and Derrick blowing by Damian Lilliard with a beautiful euro-step to draw the Spurs within 7 and force a Trailblazer timeout.

Portland’s defense isn’t a whole lot better than San Antonio’s, and it was just 11 offensive possessions, so it’s certainly reasonable to want to see that group succeed over a larger sample. Still, they produced several open shots, got to the rim and got into transition, which is more than enough in that short time to warrant a much harder look, especially given how well they performed on the other end of the court.

The Trail Blazers put up 12 points on their 10 offensive possessions, which sounds bad, but even a cursory glance at where those points came from tells a different story. Lilliard managed to draw two 3-pt shooting fouls on Derrick, the 2nd of which led to Coach Gregg Popovich’s double-technical ejection as replays showed no contact. The Trail Blazers only managed to make 2 field goals for 5 points on their other 8 possessions in that stretch.

Whatever your thoughts on how Lilliard was able to get the whistle in either case, the fact remains that Portland struggled to create high quality shots with both LaMarcus and Jakob on the floor. The combination of LaMarcus rotating over as the weak side help defender to stymie the opposing big at the rim and Jakob sliding with a drive to allow Derrick time to recover for the block should be very enticing to the team.

That’s not to say that they should make a drastic change to the starting lineup, but committing to a handful of minutes ought to be an easy decision, especially against teams that don’t have a floor spacer at the 4. Though they made it work in this game, it might not be the best idea to play the two with DeMar, especially given the plethora of options on the bench that can provide more outside shooting to offset Jakob’s lack of range.

Aside from rediscovering their defensive focus and the success of the LaMarkob Poeltridge combo, the Spurs also saw productive and engaged minutes from Lonnie Walker IV. None of it’s as good as a W, but the team has good reason to expect better results in the near future.