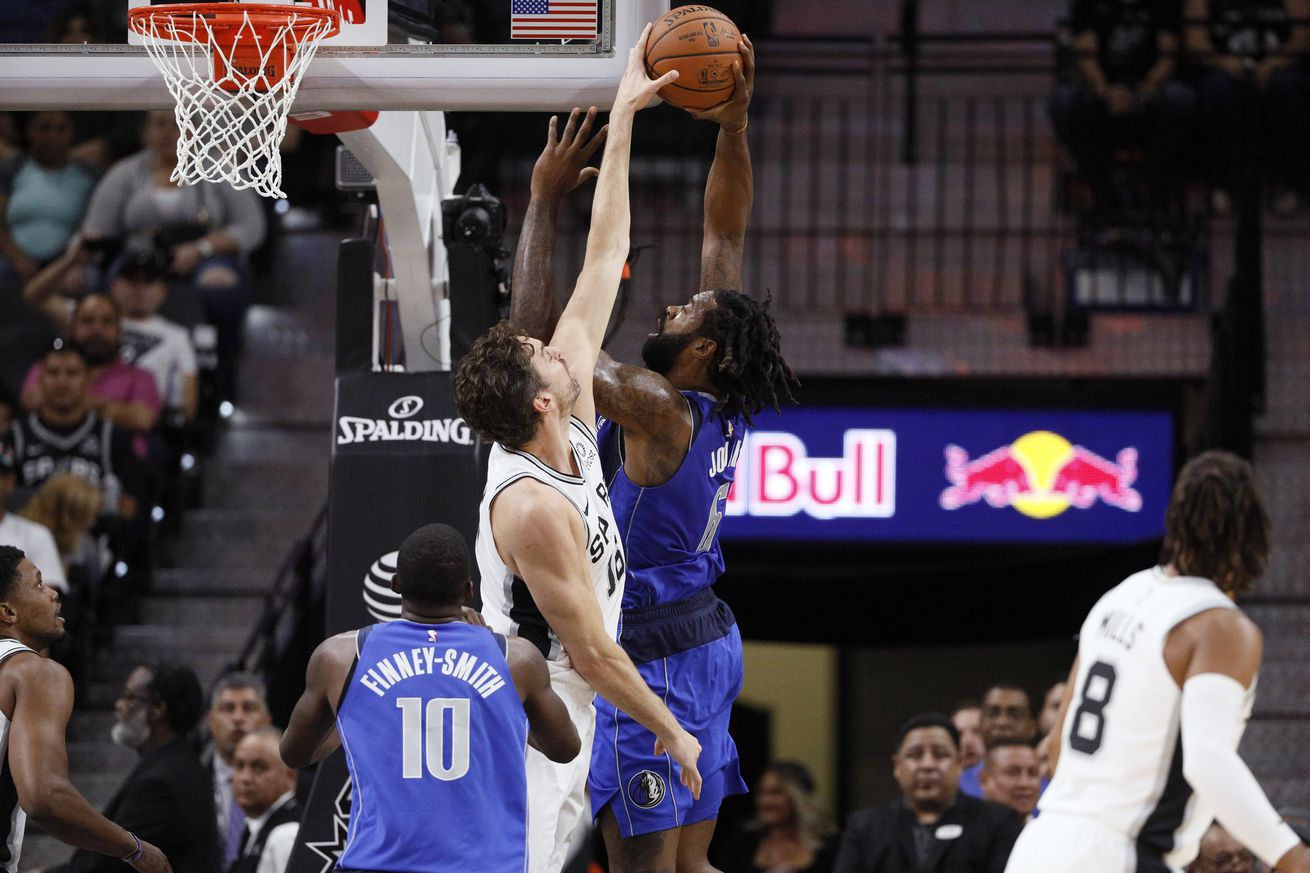 The Spurs’ rotation has been in flux recently. Rudy Gay’s 5-game absence combined with the return of Pau Gasol was far more disruptive than expected. With just a 2-3 record and a net rating of -2.9 over the 5 game stretch where the two swapped spots on the DNP list, the team looked far more vulnerable than at any time in the last 7 weeks. That could be a testament to Rudy’s importance, an indictment of Pau’s ability to contribute, or just a bump in the road, of which there are many in an 82 game season.

Missing Rudy is the most likely explanation. He’s playing some of the best basketball of his career at a position where the team is thin. But thinking about Pau’s role on the team moving forward is a bit more interesting.

The Spurs were 6-3 when Pau sat out his first game on November 7th. They lost that game and proceeded to win just 5 of their next 15, dropping to 14th in the west at 11-14. That tailspin, which culminated in three crushing 30 point losses in just 4 games, has been covered in depth, as has their incredible recovery. Suffice to say the Spurs figured a few things out in the ensuing month, and had the league’s best net rating over that time.

Which brings us to Pau’s return. For his first few games back, the Spurs brought him off the bench in limited minutes as the center on reserve units. That generally went just fine for Pau, but playing Jakob Poeltl and LaMarcus Aldridge together has not worked very well. The Spurs have a point differential of -15.4 points per 100 possessions with both on the floor, per Cleaning the Glass (CTG).

1. Jakob and Pau are centers

2. LaMarcus plays center most of the time, too.

5. There are only 48 minutes available at center

The only two ways to make it work are for Pau to sit or start alongside LaMarcus. So Pau started the last 3 games of Rudy’s absence and the Timberwolves game with DeMar DeRozan out. That option isn’t great, but it’s fine when a starter is out. Pau can soak up some minutes without getting blown off the floor while keeping the rest of the rotation intact. He plays 12-ish minutes at center spread across the beginning of each half and LaMarcus and Jakob split the rest.

That puts Jakob back in a situation where he has been near-dominant. He’s played 471 possessions alongside Patty Mills and Davis Bertans so far and the three are an incredible +28.7 points per 100 possessions, per CTG. Unfortunately, it also puts the Spurs in a situation where on some nights they are sitting a player making $16 million, and in others they’re starting a 38 year old center with limited mobility.

But that seems to be the role he’s settling into. In the last two games where the Spurs had all their parts (vs. the Mavericks on Jan 16th and the Clippers on Jan 20th), Pau came off the bench and played just under seven and a half minutes combined. Those two contests bookended the Timberwolves’ game he started in DeMar’s absence.

That’s not to say Pau doesn’t have value. He’s still 7th on the team in Real Plus-Minus and 8th in Player Impact Plus-Minus. His per 36-minute stats have held up, too. 11 points, 13 rebounds, 5 assists and 2 blocks per 36 is nothing to sneeze at. The Spurs are -20 in the 250 minutes Pau has played, which isn’t good, but that’s largely a function of the team’s struggles when playing with 2 bigs. Without LaMarcus or Jakob on the floor, lineups with Pau at center are actually +0.8 points per 100 possessions, per CTG.

He’s easily the best passing big on the team.

And one of the best high-low and entry passers in the league.

He even provides a little better spacing because he’s a threat from three, though he missed the only one he’s taken since returning from injury. But he’s still a small net negative on offense so far this year. Part of that obviously has to do with how good LaMarcus and Jakob have been, but some of it is just the slow and steady decline all players face as they age.

He just can’t move like he used to. While his skill has allowed him to maintain some level of efficacy on offense, he’s become a liability on defense. He can still protect the rim – the Spurs’ opponents shoot slightly less often at the rim when he’s on the floor and are nearly 6% less accurate – by dropping deep into the paint on screening actions. But that’s why the Spurs are getting torched in the short mid-range when he plays. Opponents are shooting over 56% from 4 to 14 feet with Pau on the court, 16.7% better than when he’s off the court, per CTG.

The Spurs’ opponents are also hitting their threes at a much higher clip with Pau on the court, though whether that’s a sample size issue or a sign of defensive breakdowns is difficult to determine. Fortunately, the Spurs rarely foul when he plays and tend to keep their opponents off the glass, so he’s only a slight negative on the defensive end. Were the Spurs in need of someone to eat some minutes as a backup 5, Pau would be great. He’ll probably be able to keep a half decent second unit afloat into his 40s, with just his facilitation and length.

But with Rudy and Davis Bertans both needing minutes at the 4, and LaMarcus and Jakob playing the 5, the Spurs can do better than stay afloat. If we’re counting Rudy as a big, that’s one of the best 4-5 rotation’s in the league. When the team is healthy, there just doesn’t appear to be a place for Pau to get minutes without making the team worse.

If he’s able to accept the reduced role, slipping into the starting lineup for 10-15 minutes when a starter is out, or taking a game as the backup big every now and again when Jakob rests, that’s great. He can still provide value and help keep the team fresh as they approach the playoffs. But Pau’s a former All-NBA level player who can still contribute. He may want more.

If that’s the case, there’s no obvious way forward. The Spurs should be considering trade options already, but there aren’t any likely suitors. There’s no good reason for the team to muddy up their books by taking on future money and, short of an injury in the next couple of weeks to a back up center on a team in win-now mode, it’s unclear who would be willing to give up an asset the Spurs value more than what Pau brings as an emergency big. His contract is only guaranteed for $6.7 million next year, making it a little easier to swallow, but the machinations of a Pau trade are complex.

The trade deadline is still a couple of weeks away, though, so Pau and the Spurs have a little time yet to sort this out. They don’t appear to have any good options at this point, but that could change in an instant. It’s probably fair to assume they’ve been preparing for this problem. Whether they’ve found a solution, though, in a season where they’ve seemed to have an answer for everything, remains to be seen.