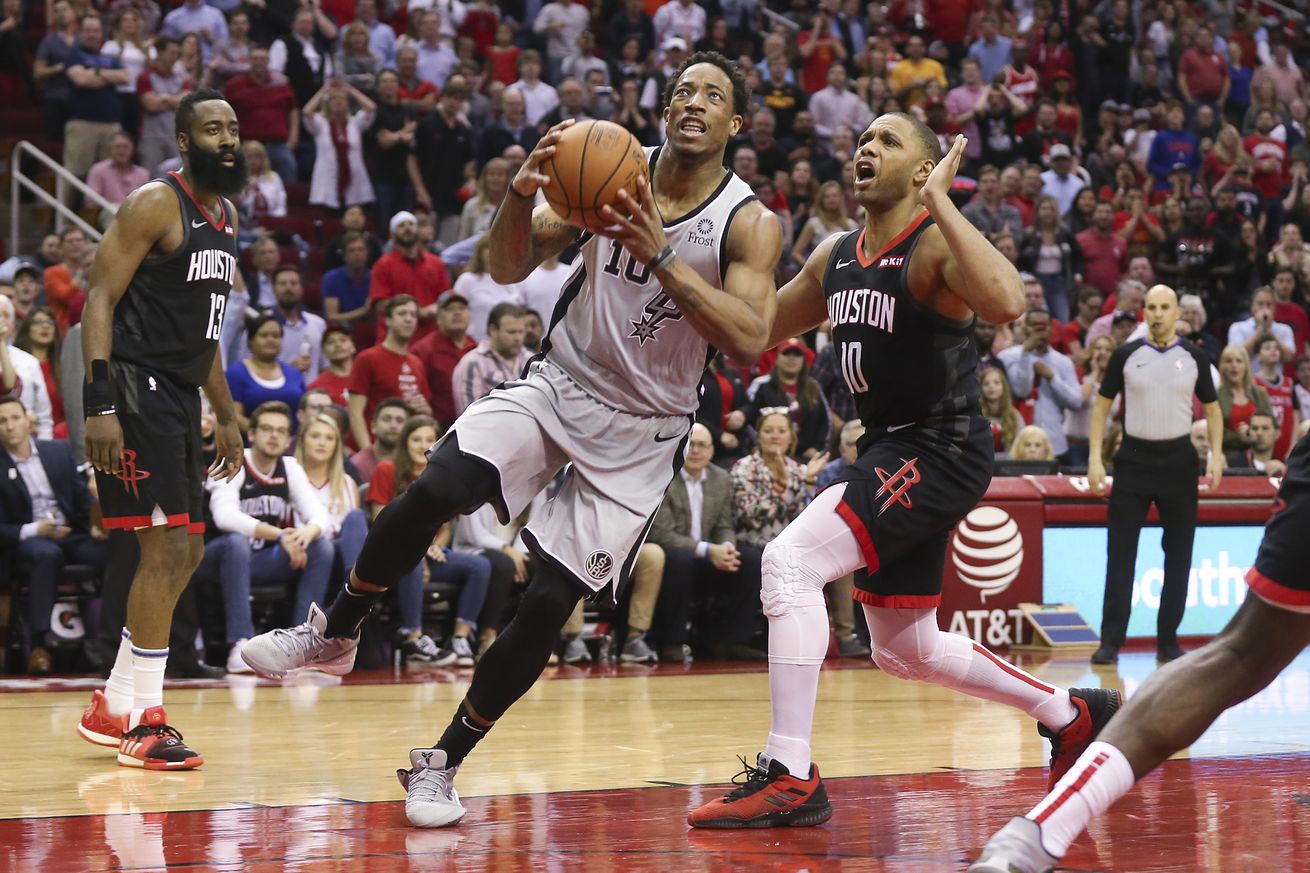 What to make of the Spurs’ late game (self) execution.

The Spurs’ dropped a winnable game they probably shouldn’t have had a chance in against the Rockets on Friday night. A glance at the box score reveals the makings of a blow out loss. On a night where James Harden set a new Spurs’ opponent scoring record with 61 points, the team’s two stars, DeMar DeRozan and LaMarcus Aldridge, scored just 16 and 10 points respectively.

The Spurs have won only 1 of the 7 games this season where the two have combined for less than 30. As a team, the Spurs made just 7 of their 24 threes and are now 7-16 when they make less than a third of their attempts from deep.

That makes it easy to understand how they found themselves staring up out of a 19 point hole early in the third quarter, but makes it hard to believe they managed to dig out of that hole and even establish a lead late in the fourth.

As impressive as the comeback was, the events of the last 4 and a half minutes of the game cast a pall over any attempt to find the silver lining in another tough loss. In real time, the Spurs appeared to unravel after an especially egregious bit of officiating took two points away from DeMar and gave the Rockets a much-needed boost.

This is a bad call. The defensive player can’t get in the way of the shooter’s natural motion, and that’s clearly what happens here. What part of the body is in the way is irrelevant. Of course, on the last replay in that clip you can see that there wasn’t actually contact with James Harden’s chin, either, just his beard.

Were there contact, you’d be able to see either DeMar’s elbow or Harden’s head deflect at the moment of impact, but that’s not what happens. Harden’s beard moves, which, if anything, should have given DeMar an and-1 opportunity.

Instead of going up by 8, or possibly 9, the Spurs went into the next defensive possession with a 6 point lead. The call was unfortunate, but it was just one play, and according to Inpredictable, the Rockets’ win probability was still less than 15%.

That changed quickly, as DeMar missed jumpers on the Spurs’ next two possessions while Harden nailed 3 consecutive deep threes to give the Rockets a 3 point lead with 2:50 to go.

Undeterred, DeMar remained aggressive, taking 3 of the Spurs’ last 6 shots. All in all, he made just 1 of his 5 attempts in the last 4 minutes. The only other Spurs to get looks down the stretch were Bryn Forbes, who made his only attempt, and Davis Bertans, who missed both of his, lending the stench of failed hero ball to DeMar’s stretch run.

That’s a fair sentiment, but a closer look at those possessions shows they were very much in character for the Spurs’ offense, which may be even more concerning.

This looks like it was intended to be the Spurs’ zipper back cut, a play they’ve relied on for years. DeMar doesn’t use Rudy’s screen very well as he comes out of the corner and never really puts any pressure on Harden, who is content to let DeMar catch at the top of the key. That takes away the backcut, turning the play into a one-on-one with half of the shot clock gone. DeMar could have called LaMarcus up for a screen, but chose to take the elbow jumper, a shot he excels at. Given what had happened on the previous possession, that’s understandable.

Harden doesn’t typically play pressure defense or attempt to deny the ball, so running a play like this for the player he’s guarding doesn’t make a ton of sense without first trying to generate a switch.

Coach Popovich is clearly signaling for Power 3 Ice, and Eric Gordon immediately recognizes the call and starts gesturing towards DeMar. P.J. Tucker sets up to keep DeMar from using the first screen, but DeMar gets tricky, and shoots under Rudy to get free. It works, and he makes a clean catch on the right wing inside the arc and goes to work. DeMar gets to a good spot and turns over his right shoulder to shoot, but Tucker is in excellent position and swats the ball free as DeMar is on his way up.

This possession represents a lot of what doesn’t work for the Spurs’ offense against the Rockets. They have 3 defenders on the floor who can credibly guard DeMar in Tucker, Harden, and Gordon. Without a mismatch, and especially against a disciplined defender who won’t jump first, DeMar’s ability to manufacture points is limited. Still, in this case, a pump fake to try to get to his step through or a kick out to Rudy Gay would probably both have been preferable.

The Spurs run another called play here, with LaMarcus receiving the ball at the top of the key before tossing it to Bryn Forbes then following Derrick White over to the left side to set a staggered screen. DeMar curls over the screens, catches at the foul line with a step on Gordon and heads straight to the rim for a layup. There’s no reason for DeMar to pass, but Derrick White is wide open in the corner, which is something to remember if the Spurs end up needing 3 points in a series against the Rockets.

This is the first of two straight up isolations the Spurs used in this stretch, though it’s one of DeMar’s favorites. Several times a game he’ll wave someone out of the corner, especially on the left side, so he can go to work against a defender early in the shot clock. In this case, DeMar versus Tucker isn’t enough of an advantage to warrant not running something. Even just throwing in a pistol-type action with Bryn Forbes setting a screen on the left wing to get Chris Paul switched onto DeMar would have been preferable.

Instead, Bryn clears out to the weak side. DeMar gets to a good spot again, but Tucker is a very good defender and well-suited to match up against DeMar. The ensuing block is less than surprising.

Coming out of a timeout, Davis Bertans, who checked in for Rudy Gay, inbounds from the right sideline. He passes to Derrick up top before running over to the free throw line to set one of a pair of screens for DeMar. If this looks a lot like Power 3 Ice from earlier, it should. The Spurs are using that setup for a bit of misdirection.

This time, instead of spacing out to the left wing while DeMar attacks, Davis waits in the lane for a bit, then runs off a screen from LaMarcus out to the right wing. With Clint Capela concerned about containing DeMar’s penetration and Harden caught on LaMarcus’ screen, Davis has a wide open look, but rims it out.

This came immediately after the Spurs’ first stop since before DeMar’s offensive foul. The Rockets had scored on 5 straight possessions putting up 13 points while the Spurs had managed just 2. DeMar is clearly feeling the sense of urgency here and pushes up court looking for an opening.

He gets to a good spot, again, and hangs in the air long enough to get the shot over Tucker this time. Unfortunately, that gave Capela enough time to react and he smacks the ball back out to the three point line where Chris Paul recovers it. Of all the times to not lay it off to LaMarcus standing all alone at the front of the rim, this one stands out.

Tucker is fading to the baseline and Capela is jumping as high as he can. It wouldn’t have been easy, but if DeMar could have dropped the ball to his left, LaMarcus would have had a lay up.

This is the Spurs’ double drag, a play they frequently run for early offense. Davis pops to the three point line after setting the first screen and LaMarcus rolls directly into Harden after setting the second, giving Davis room for a shot. But DeMar’s throw back is low and Davis is unable to corral the ball. He ends up on the floor, desperately looking for an outlet before taking a foul from Harden.

For the ensuing sideline out of bounds play, the Spurs put the ball back in Derrick’s hands and run Bryn Forbes off a pair of screens of his own along the baseline. Paul knows the play and shoots over the screens to disrupt the passing lane, but Derrick and Bryn read the defense and instead of fading to the corner, Bryn curls over the top of Paul. Derrick feeds him the ball right on time, and with Paul out of the play, Bryn takes a dribble to set his feet and nails the three.

On the Spurs’ 7 offensive possessions that mattered over the last 4 and half minutes, they ran 6 called plays and just 2 isolations. That they only scored 5 points on those 7 possessions comes down to match ups and missed shots. DeMar bears a lot of responsibility for that result – the ball was in his hands, after all – but he wasn’t just jacking up shots.

It’s easy to point to the Spurs’ other offensive talents and wonder why they didn’t have the ball more. But there are good reasons in each case.

LaMarcus was obviously having a tough night. He finished with just those 10 points on 13 shot attempts and didn’t get to the line a single time. Rudy would likely have had the most obvious mismatch, were the Spurs’ looking to attack that way, but he struggled to get in a rhythm as he fought foul trouble the entire game, and only took 4 shots in his 21 minutes of play. Derrick finished the night with 18 points, second only to Bryn’s 20, but hit only 5/12 from the field, and had a tough time with Gordon thoughout the night.

In the end, a little better decision making with respect to who to attack, a little better execution, and knocking down an open look or two would have closed this game out, regardless of the officiating. The problem, though, is that it’s a little late in the season to be lamenting late game execution and decision-making. Those are habits that should have already been built.